Leatherface a star away from home

Rick Patterson has logged thousands of miles travelling across Canada from one territory to the next during his 18-year career. Sign posts on his journey have included Stu Hart’s Stampede Wrestling in Calgary, Al Tomko’s All Star Wrestling in British Columbia and Emile Dupre’s Grand Prix Wrestling in Nova Scotia.

And yet, to this day, Patterson’s remembered not for his work here, but abroad as the infamous Leatherface in Japan’s International Wrestling Association.

“I’m always amazed whenever I wrestle in Canada there’s always one or two guys who come up to me and say the saw me in some death match in Japan,” Patterson told SLAM! Wrestling over the Easter holiday. “I can’t believe it and I always ask myself ‘how are they seeing this stuff?'” 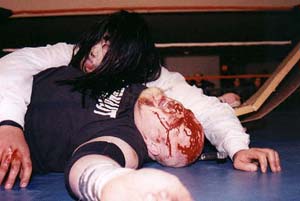 Patterson’s reputation in the international wrestling community is well deserved. For the past seven years, he’s thrilled Japanese audiences playing the Leatherface gimmick, based on the character from the cult film ‘The Texas Chainsaw Massacre.’ Complete with a Leatherface mask and costume, Patterson makes his way to the ring each night in the hardcore promotion, wielding a spark-flying chainsaw, parting the sea of fans that crowd the aisle as he makes his entrance, sending them scurrying for safer ground.

“Mike Kirchner had the gimmick (first) and he’s the one that really got it over,” said Patterson. “He was working with it and then he got into a fight and was thrown into jail. Then (IWA promoter) Victor Quinones brought me into the character.”

“When I walked out the first night the character was so over I couldn’t believe it. I knew it was all what Kirchner had done. It was all his doing in getting the character over. I just sort of fell into it and tried to get the momentum up that he had.”

Patterson has parlayed that momentum into a big career in Japan. As one half of the current IWA World Tag Team Champions with Jason the Terrible, Patterson has had a flourishing stint in the IWA, Japan’s answer to ECW. During his time there, he’s wrestled the likes of Terry Funk, Cactus Jack (AKA Mick Foley) and Terry Gordy.

His fondest memories are of his time spent with Foley.

“For two years we were the only foreigners on the whole tour. A lot of times we would sit on the back of the bus and read books or talk. We pretty much had to put up with each other. He’s a great guy. He’s one of the best guys.”

Patterson also claims to be the first to have seen the Mr. Socko gimmick.

“The first time I was with Jack over there after the tour we would always have a lot of money, a big old roll of it,” remembered Patterson. “I’d put it in my pocket or hide it somewhere and Jack had this old, nasty sock that he used to stick it in. He always used to stick his money in this sock and the he’d hide it somewhere. (laughs) That Socko gimmick was around long before he ever got into the WWF.

Perhaps the match Patterson is best remembered for is his battle with Terry Funk in August of 1995 during the IWA’s “King of the Death Match” tournament at Kawasaki Baseball Stadium.

“It was terribly hot and humind that day,” recalled Patterson. “Terry just about broke my neck. We climbed up on the baseball (backstop) fence 30 feet in the air and he tried hanging me with a chain.”

Patterson counts wrestling in Tokyo’s Korakuen Hall, Japan’s most revered wrestling building, as one of his biggest thrills.

“I’ve been there just about every tour. It’s a beautiful building. My favourite part is where the foreigners go out, just about every body has written a note there on the wall. There’s everybody there from the young guys to Bruiser Brody. I go there and read that and you see all the people who have been through there and you get a kick out of it.”

Patterson also competed in Mexico where he wrestled for the EMLL promotion, based in Mexico City. He fought such Mexican stars as Atlantis, Super Astro, Apolo Dantes and El Hijo del Santo. Patterson also worked with a young, Canadian wrestler coming up the ranks in EMLL by the name of Chris Jericho. 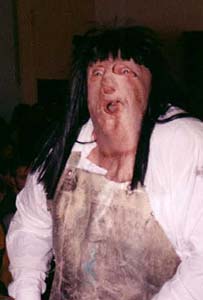 Patterson was one third of a trio combination with Fabuloso Blondie Ken Timbs and fellow Canadian Mike Stone.

“We we’re the big, bleach-blond foreigners, gringos. That was a lot of fun because it really got over. We were super heels, we went in there and worked over the top heels and turned them babyfaces so it made us look like super villains.”

In between wrestling for EMLL, Paterson worked for Carlos Elizondo’s indy group based in Monterrey, Mexico. While there, he became embroiled in a lengthy, memorable feud with current WCW superstar Vampiro.

“I had a good run there for Carlos Elizondo,” said Patterson. “It was a year-long program that we had. Vamp was on top in EMLL and he would come up every Friday night to the Plaza del Toros in Monterrey (an outdoor bullring that is among the most famous wrestling venues in Mexico). Every time we went in there it was packed to the rafters; 25 to 30,000 people.”

“It just started one day,” remembered Patterson. “He was wrestling Sangre Chicana and I came out in a cowboy outfit and a big Stetson cowboy hat. He was getting beat up and I went in there to help him. As I went in there to help him the last second I turned and hit Vampiro. I pulled the coat off… and I had this Mountie costume underneath and the crowd went crazy. I was la Policia Candaiense (The Canadian Mountie).”

“The week after that he had a cage match with Sangre Chicana and I climbed over into the cage and (layed him out). He had to be carried out. There were 20 police who handcuffed me, and started beating me up and girls pulling my hair and scratching my face. That’s where it got started. After that we’d go every week after that. It kept steam rolling from that and it was a great time.”

Patterson can relate to current WCW wrestlers who complain about working with Vampiro because he’s too stiff.

“Basically what (our feud) was, was two Canadian guys just fighting. We were practically killing each other out there. We were beating the daylights out of each other. We realized what was happening when people were coming. We would just potato the crap out of each other. The fans liked it and the promoters loved it even more. But he’s legitimately a tough guy.”

Being handcuffed by Mexican police and attacked by female fans in Monterrey pales in comparison to his experiences wrestling in South Africa last year.

“I hit the ring and attacked everybody and attacked the promoter and knocked everybody down and next thing you know… some gun shots went off in this outdoor arena. They were just mad that I beat the crap out of all them. They didn’t like me. They were at the top of the building. The police said later it was a guy with a 9mm (gun).”

“We had security every night take us to the building and take us away,” continued Patterson. “(The next night) I interfered in a title match and again rounds went off up there. I was just waiting for the bullets to tear through my head. The entire time I was in Africa I was afraid. I was constantly wondering what was going on.”

Because of his commitments in Japan, Patterson rarely works in his native homeland any more.

“I really haven’t wrestled in Canada all that much anymore. There was never really enough money to work in Canada,” admitted Patterson. “My dream was always to go to be a wrestler and go to Japan all the time. I’ve stayed with the IWA office and (the promoter) has taken very good care of me. It will be my 65th tour coming up (in May) since ’93 so I’ve really chalked up the miles.”

“I really like working for Michelle Starr here in Vancouver. I walked into one show one night. I heard they were doing real good and doing hardcore matches with blood and guts. I’ve always been coming through Vancouver on my way to Japan. I ran into one friend of mine, Dr. Luther, he’s another Canadian who goes to Japan for (Genichiro) Tenryu’s WAR promotion. And he told me about ECCW here. I didn’t know much about it. I just showed up one night and they let me manage one guy… and it just started from there and I did a short tour after that.”

ECCW is comprised of young Canadian talent trying to catch their first break. As someone with a wealth of experience, Patterson finds himself in the role of locker room veteran while in ECCW. Looking back at the path he took, he has some sage advice for young wrestler trying to make it in wrestling.

“I worked for Emile Dupre for two summers,” recalls Patterson. “That’s a great place that I recommend for young guys. That’s the best place in the world (to learn). The travelling is so hard, the matches are demanding. When I was there I was wrestling seven days a week and twice on Sundays. So I was getting all the experience and getting in good shape.”

In between his upcoming tours with the IWA and ECCW, Patterson plans on touring Korea with the World Wrestling Association promotion. Patterson worked a tour in Korea in late 1999, his first back in that country since 1996. He was amazed at how far the business has developed during those three years in Korea.

“If business picks up over in Korea (my fiancee and I) might have to move over to Korea for a while. I couldn’t believe the business in Korea right now the way it’s going and coming up. They’re really building up the talent, the economy is really booming and the crowds are huge. It’s just unbelievable.”

“I’m going to try and stay with ECCW for a while and get on more tours,” continued Patterson. “We’re going to be doing some joint shows with the IWA and Korea.”

He also wants to try and get back down to Mexico.

“I’d love to get back to Mexico,” admitted Patterson. “I’m trying to find a way to get back down there. I’m definitely going to try and do that for July.”

Looking back a career that has taken him all around the globe, Patterson doesn’t regret spending the bulk of his time away from his homeland.