The news that ECW mainstay Sabu signed a deal with the rival World Championship Wrestling promotion sent an unexpected shudder through the wrestling world last week. 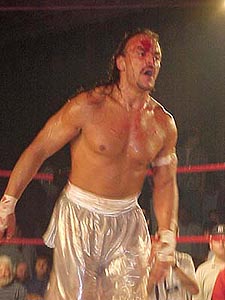 From a corporate perspective, Styles claims that he’s been told that Sabu has a “signed agreement” with ECW. An agreement that WCW never even inquired about when presenting Sabu with an offer. At present, lawyers for ECW and WCW are butting heads over whether the agreement will stand up in court.

According to Styles, though Sabu is a talented performer, he alone can’t save a company in turmoil.

“It’s nothing against Sabu. You could take a whole locker room and it wouldn’t make a difference right now. The problem is that they are a company in disarray. They’re a company with no leadership. The wrestlers are allowed to do whatever the hell they want. They go on television and do interviews that are completely unproduced,” said Styles. “I mean have you seen the line-up for SuperBrawl? You gotta be kidding! They aren’t going to do any more buys than we are but they are going to spend a ton more money than we are.”

Van Dam, who was trained by Sabu’s uncle The Original Sheik at the age of 19 and is a very close friend of the homicidal, genocidal, suicidal, hardcore wrestling icon, Sabu’s situation with WCW is the least important thing on his mind these days.

“I’ve talked to Sabu and honestly, he is going through some personal stuff at home right now with his mother being sick. His mother is not doing well right now. She’s in the hospital. And, when I talked to Sabu it’s really not even about business,” said Van Dam.

Van Dam is also downplaying the impact Sabu’s departure will have on ECW. Even though one of their most recognizable and influential stars has left, Van Dam says the show will go on.

“I don’t mind saying that it’s bad for us that he is going to go. It’s not completely damaging. It’s not going to do us in or anything like that. Right now, I don’t even think it’s the most important thing on his mind,” said Van Dam.