Stryking out on his own

Chris Benoit, The Dynamite Kid, Davey Boy Smith, and Bret Hart. Several wrestlers who not only got their starts in the business at very early ages but obviously started their paths to greater things in the Great White North. These are just some of the comparisons that you can make between these wrestling greats and Manitoba standout Darren Metselaar.

Big, stocky, and just a little cocky is probably the best way to describe River City Wrestling mainstay Steve Stryker (Metselaar’s alter ego). For those of you who haven’t heard the name, you just may soon. Stryker, 26, is an eight-year veteran of the ring wars and like those previously mentioned superstars, has had his share of injuries that have slowed his climb to the top. 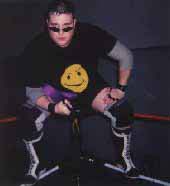 Since 1993, at the young age of 19, Stryker has battled shoulder ailments garnered from in his in-ring activities. A house show in Manitoba with low ceilings saw him wrench his shoulder from its socket performing an elementary arm drag. Although repaired, albeit in the locker room, Stryker would re-injure the shoulder a week later in a tag team match with “a guy didn’t know how to work to save his life.” Stryker and his partner performed a double clothesline. Their opponent didn’t take the bump and hung on to his arm. The move aggravated Stryker’s injury.

Things have been looking up over the last two years though. After some shoulder surgery, Stryker now has a vital presence in the Canadian mid-west as part of River City Wrestling and has wrestled more now in the past two years than in his entire career. He explains his resurgence in the scene very simply: “I’ve finally gotten the fear out of my body of protecting my shoulder,” said Stryker.

“The CWF signs you to contracts, which is absurd. Basically, I was their heavyweight champion for the first bit of ’99. I got released from my contract there and then I hooked up with Tony Condello’s IWA. I kept a consistent schedule straight through ’99.”

Which brings us to Stryker’s current stint in River City Wrestling, a promotion he’s very familiar with.

“River City, being more of a developmental promotion at this point, needed veteran guys who were nice enough to help out. I still work with the IWA but with River City I’m there helping out the guys and I’m there quite a bit. I’ve got a consistent schedule and I’ve probably gotten in 30 matches in the last month.”

Stryker sees his “classic heel with an edge” character making it to the big leagues some day. It’s a desire that becomes quite evident when speaking to Stryker.

Which goes part of the way to explaining what Stryker is like in the ring but he fills in the rest of the blanks well with his own interpretations of how he sees himself as a performer.

“The way I work in the ring, it’s unexpected. I can come into a ring and work several different styles. From luchadore style, as weird as that sounds; I mean I’m 6’2″, 290 pounds, but I can do the luchadore style, I can do the mat style. I can shoot fight. They’re just things I’ve learned over the years. Fans can expect a classic heel with a modern edge when I step into the ring. I’ll come to the ring get the crowd fired up. I’ll go in there and do moves, and take moves, that they don’t expect, they get awe-struck by it.”

Seemingly deserving of recognition for his in-ring accomplishments and talents, Stryker also has much more on his plate in the foreseeable future. He has an invitation to go the Funk Conservatory in the spring and was invited by Dory Funk Jr. himself. Before that, Stryker is expecting to get his diploma from Robertson College in Radio and Television Broadcasting. Until then though, Stryker has goals that are within reach, and that could happen very soon.

“As far as I can tell the River City heavyweight title is in my future, and I hope to win it within a month. The River City Rumble is on February 19th in Winnipeg. The winner of the battle royal wins the belt.”

Stryking back against heart disease