Laying down The LAW on radio

Wrestling fans have begun to obey The LAW.

Arguably the Internet’s most influential wrestling radio show, The LAW (Live Audio Wrestling) is attracting some of the top names in the game on a weekly basis, and what they have to say is reported on site after site.

The LAW can be heard on the FAN 590 radio station in Toronto on Saturday afternoons from 1-2 pm ET, with a second show later Saturday night. But its the show’s Internet presence at both the FAN 590 website that draws a crowd.

Before getting on The FAN, The LAW debuted first on the station’s Internet site in April of 1997. The program eventually made the transition to an on air program.

While wrestling coverage has exploded on the Internet the past two years, The LAW prides itself on the fact it is radio.

“There’s an intimacy with radio because it’s such a one on one (medium),” said LAW co-host Jeff Marek. “With radio you can make one on one connections.” 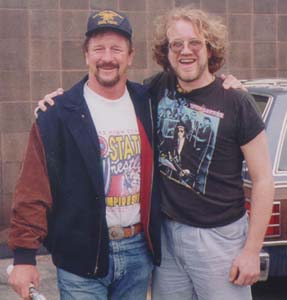 “I like the intimacy of radio. Radio has a real dynamic. Talk radio is very big now.”

Co-host Donnie Abreu is proud of The LAW’s record of news reportage and the bond it has forged with its listeners.

“Trust is a big thing with wrestling fans,” explained Abreu. “We pride ourselves on presenting accurate information and going a little deeper than most people. We try to present a story as facts and then try to get at the heart of the story.”

“If there’s a big story in wrestling people know The LAW’s going to be all over it, they know we’re going to cover it and more than likely we’ll have the principles involved on air discussing it.”

Another strong point is the inter-activity of the show. The LAW often takes calls from listeners to discuss the latest happenings in the mat world and allow them to ask questions of live guests.

“I love opening up the show to our listeners,” said Marek. “Fans never have access (to the wrestlers), there’s still that separation that wrestlers themselves want to break down but they don’t have a forum to do it.”

Underneath it all, the entire crew at The LAW are wrestling fans.

“The show is great because you get to meet all the guys you admired as a kid,” laughed Lovranski. “It’s great to see what the guys are like and to find out that most of them are likeable guys in real life.”

Another part of the show’s appeal is the banter and chemistry between Marek and Abreu. Both have distinct views on the sport that don’t always mesh together. Good natured arguments aren’t uncommon on The LAW, making the show all the more entertaining to listen to.

“Donnie and I don’t always agree,” admitted Marek. ” I think that’s great because it would be a pretty boring show if we did. I don’t think people would tune it to listen to two guys agree with each other for an hour.”

When the two do spar on the air, it’s up to Lovranski to keep them on track.

“I sort of steer the ship while it’s on the air,” explained Lovranski. “I’m steering them to make sure they stay on track. I’m also the tie-breaker when ever the guys butt heads over something.”

Despite all the fun they have on air, there’s a lot of hard work and preparation behind the show.

“Dealing with the media relations people for the WWF, WCW and ECW is a nightmare,” admitted Marek. “They’re horrible and miserable to deal with. Considering the job of wrestling is to get the company over, you’d think they’d be a lot more accessible to the media. They’re not at all.”

“Putting the show all together is tough,” concurred Lovranski. “Dealing with wrestlers is a lot like dealing with rock stars. Figuring out who you want to have, coordinating the talent. Everything leading up to the show is a lot of hard work and a lot of headaches.”

Another major frustration is squeezing the show within the confines of a one hour format.

“I think it has to be a two-hour show,” said Marek. “There’s so much happening in wrestling. You can’t get to the news, and do interviews and everything else all in an hour. Things get really crammed.”

Despite the headaches, all three love doing the show and love the fact that it’s had an effect on so many people.

“There’s this guy in New Zealand who has weekly LAW parties (and downloads the show from our site),” laughed Abreu.

“We get a lot of people who say to me ‘I was a fan in the ’80s and then got out of it but the show is so compelling, so much fun that I’ve started watching wrestling again.'”