Smiley’s screaming his way to the top

Screaming Norman Smiley is over. There is no denying it. They chant his name, laugh at his interviews and do the Big Wiggle along with him.

It’s not exactly how the former world champion in Mexico saw himself getting over in WCW. Hardcore matches and screaming were not on the curriculum at the Malenko’s wrestling school back in 1986.

Yet, here is backstage at WCW Mayhem in Toronto, preparing to win the newly-created WCW Hardcore title in a wild match against Brian Knobs. 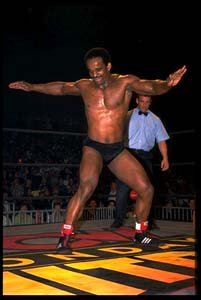 “The moment I realized that the whole angle was clicking and everything was working was when I worked a match with Barbarian and Meng,” Smiley explained. “They had me down, and they were shouting ‘Norman, Norman, Norman.’ I said ‘Wow, this thing is really working! I’m going with it!'”

Before getting to WCW, Smiley wrestled all over the world. He spent quite a while in England, went to Japan a couple of times, ECW in 1995 and 1996, and was one of the bigger names in the now-defunct Global Wrestling Alliance out of Florida.

He was brought to Mexico and EMLL in January 1991 by Konnan, who had met Smiley at WCW Starrcade ’90. Smiley was CMLL world champion in Mexico, after beating Rayo de Jalisco in a tournament final November 20, 1992. He lost the title to Silver King July 28, 1994. He also had many great matches against Ultimo Dragon.

Smiley befriended many of the Americans and Canadians who were in Mexico at the time, including Art Barr, Vampiro and Chris Jericho.

Besides his real name, the 6’2″, 247-pound Smiley has also been Lord Norman and Black Magic.

Well-schooled in the finer arts of wrestling, the facts are that his Big Wiggle dance, his in-ring screaming, and unorthodox hardcore style have been his ticket to success.

In a January 1999 interview with WCW’s web site, he said “Same guy, same package, same moves, same tights, but now I have a ten-second dance and the world loves me.”

In WCW, he never really got past mid-card status, feuding with the likes of Chavo Guerrero Jr. over his pet horse Pepe.

“I’m very happy with the addition of Ed and Vince,” said Smiley. “I think those two guys are very creative, and imaginative. And they’re giving the younger guys a push, which was something that WCW needed. I think they needed some fresh faces in order to be competitive.”

But how much of his current character should be attributed to the new ‘Powers That Be’?

“The Big Wiggle was me. I came up with the dance initially and the screaming and the hardcore was all their idea,” he laughed. “The hardcore matches are the furthest thing from my style. I never did a hardcore match until about a month ago. It’s funny. When they first came to me with the idea, I was a little hesitant about it, because as I said, it’s not my style. But then they said that’s exactly it, it’s so far from your style, so much of a contrast, that will make it funny, that will make it entertaining and you’ll get over — in addition to doing the screaming, screaming like a girl.”

After 13 years in wrestling, Smiley is enjoying the true “international exposure” for the first time in his career. Yet he doesn’t think that this is actually the pinnacle of his career.

“I was world champion in Mexico and was the number one heel there, so I don’t think it’s been my peak as far as popularity, because even now I live in Mexico City, and I haven’t wrestled there in over a year. But every day people recognize me on the street.”

But now they are dancing with him too.