Bill Skullion has a reputation as a wild man in the ring.

Dressed in black, forehead full of scars and wearing an ‘Everybody Sucks’ T-shirt, the 28-year-old Skullion is never going to host a children’s show.

He’s survived everything from cage matches to thumbtack matches during his eight-year career. This Friday, he brings his unique mayhem to The Opera House in Toronto for Ring ‘n’ Ears II. 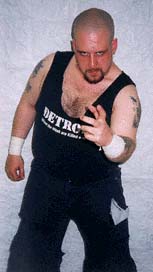 But while he still loves what he does, he wishes that people would look at him differently.

“People think I’m f—–, even though I’ve had formal training,” he explained to SLAM! Wrestling.

Skullion was first turned on to pro wrestling as a kid while attending a Dave ‘Wildman’ McKigney show at the Scaborough Arena. He jumped out in the aisle to take a photo of the original Sheik (Ed Farhat), and was chased into the stands for his effort.

When Skullion saw an ad in the newspaper for a wrestling school in Newmarket, he answered it and took the bus to meet his trainer. Surprise, surprise, his trainer turned out to be Watson.

When things cooled down, he promoted a few of his own shows, and did a few indies in Ontario before hooking up with Malcolm Monroe’s Midwest Territorial Wrestling in Detroit in 1994.

It was the break he was looking for.

The territory changed direction shortly after his arrival, and became Insane Championship Wrestling. He was grouped with a “Four Horsemen type thing” with future WWFers Sexton Hardcastle (now Edge) and Christian Cage (WWF lightheavyweight champ Christian) and Joe E. Legend. As ‘Thug Life’, the foursome were a top draw for the promotion.

Skullion was well-suited for the hardcore style, but still believes that it stunted his development as a wrestler.

“Anyone who could swing a chair figured they could wrestle,” said Skullion.

Eventually fed up with MTW, he moved to the rival Northern States Wrestling Alliance, also in Detroit. There, he formed the tag team Blood and Guts with Killer Kanareck (whom he wrestles Friday in Toronto).

Kanareck, who was trained by Larry Zbyszko, and Skullion “totally” gelled and wrestled for the NSWA until being banned from the only building the promotion was running shows.

Skullion believes that the owner thought their act was legitimately “too hardcore, too extreme”.

From there, he did a few shows with the Cambridge, Ontario-based ICW, where he was tagged up with Sailor White as Sailor White Jr.

Skullion didn’t enjoy that. “I wanted to establish my own name.”

He also wrestled on the December 1997 Insane Clown Posse-run show in Detroit.

At the moment, Bloody Bill isn’t tied to any promotion, and is working the Ring ‘n’ Ears show because he is friends with the headlining band Bad Blood.

“Things have slowed down in the last little while,” he said. Eventually, “I’d like to get to Japan … [it’s] more my style.”

He has high hopes for catching on with WCW, possibly teamed with Kanareck.

Outside of wrestling, Skullion works as a bouncer at the Limelight night club in Toronto where, of course, he also gets paid for busting heads on occasion.

Wild Bill used to train me when he was a teacher at ICW. And I remember the first day I ever walked into the school. I went their to check out the school with my mother, to see if I wanted to go there. And he showed me around the school, and the gym and the ring. He asked me if I wanted to go into the ring, and it made my day. He made me the happiest man on earth. Then he said, “Ben, run the ropes, see how well you can do”. I did, and he kept pushing me to run faster, and faster, and I’ll never forget that about him. Then when I started the school, he was always there to help me, give me advice, to be a friend, cheer me on, just push my to my limit. But it was all for the best. He taught me how to take the bumps, I tried and I tried and I was doing it like a pro, and he let me know it. Every time I did something wrong he told me and worked with me until I got it right. I will never forget the man and I wish he could teach me again.
Ben Ortmanns

I have been fortunate enough to meet all of the big time stars today in wrestling, some were very professional, some were borderline rude. I have never met anyone with as much ignorance as Bull Skullion. I met him at Maple Leaf Gardens a number of years ago and he blantly went out of his way to be ignorant to me. Once you make it as a star you can be rude and people will consider you “unique” until you make it to the big time however you will be considered “a no class jobber”. Think about it “Bull” 🙂
Terry Harris

In Sydney, Nova Scotia, on May 3rd, 2001, a new upstart promotion called Real Action Wrestling (R.A.W.) was running a show. Mr. Skullion was taking on a legend in Newfoundland Wrestling (?!?), Bad Boy Batty Batt in a Hardcore Match.
Well, to say that he beat some sense into Batty Batt would be an understatement. He beat him with cookie sheets, a Super Nintendo, a keyboard, and, of course, at the end of the match, he drove him through a table! It was really wicked.
Anyways, at the intermission, he made his way to the autograph table and was signing autographs and selling his t-shirts, which I bought one of. As he was about to leave, I asked could I get my picture taken with him. He said “Sure.” I was just about to stand next to him, and he said something like, “Hold on a second” and he threw me across his shoulders and gave the camera a middle finger while my friend took the picture!!! IT was really neat and I wish Bill all the best.
Ryan Doucette (Doobie, Cape Breton’s Hardcore Legend)