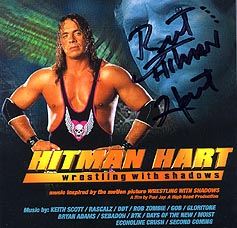 When a label announces they’re putting out music that was inspired by one of your favourite wrestlers, you tend to get excited, that is, until you find out it’s just one big marketing ploy.

Don’t get me wrong. If anyone deserves a soundtrack based on their accomplishments in and out of the ring, the Hitman does, as he’s the best there was, the best there is, and the best there ever will be. Am I a mark or what? But some things about Hitman Hart: Wrestling With Shadows (Music Inspired By The Motion Picture) from Unforscene Music, are suspect, including the fact that the soundtrack comes out a year after the movie.

The CD looks like a gimmick designed to sell records not wrestling moves. The 15-track disc has a decidedly Canadian flavour with acts like the Rascalz, Bryan Adams, Moist and Econoline Crush gracing the album but it’s pretty arrogant to say that just because they’re Canadian they’re inspired by Bret Hart.

Proof of this, the Bryan Adams track “Only The Strong Survive” is taken from his landmark album – Into The Fire – released a full 11 years before the movie which supposedly inspired this soundtrack. Another example of false inspiration is the Rob Zombie track “Superbeast” taken from his multi-million selling Hellbilly Deluxe of last year.

We can’t be all negative here though. We’ll treat the CD as a wrestler with some good moves but with a horrible schtick and problems selling his opponent. One track that’s definitely made for the Canadian mat icon is “Sharpshooter (Best Of Da Best)”, by hip-hoppers and two-time (two-time!) Juno Award winners , the Rascalz. “Sharpshooter” may not be the ideal music for the Hitman to enter the ring with but it has some humorous lines like “And it’s my duty to keep it raw and make the law. And if they act up throw them in the figure four.” It’s Definitely worth a listen.

The rest of the songs are made for rock radio consumption but with nothing too heavy. It’s easy to see Hart listening to many of these songs, such as “Touch, Peel & Stand” by Days Of The New and “Sparkle & Shine” by Econoline Crush, as The Hitman is a purported fan of rock and roll. Entering into the ring with some of these, however, just wouldn’t hold over, perhaps with the exception of “Superbeast”. The Zombie song is the heaviest track on the CD and sounds like it would fit in well with many of the over-the top antics of many a squared circle performer. It musically fits with Hart’s punishing and wear-down mat wrestling skills quite well.

When the bell rings though the soundtrack stands third to both the movie and Hart in any triple-threat match. Few songs adequately represent some of the scenes from the film, in realism or intensity, but most are like the Tito Santanas of the wrestling world – just fodder to get somebody else over and in this case, filler to make more money.