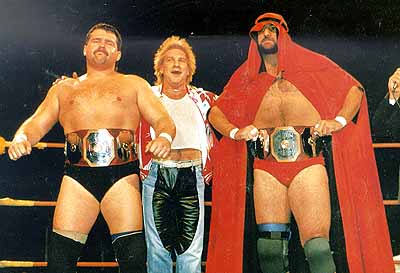 During his years of wrestling, there’s no question that Richard Charland loved being bad.

“There’s nothing better [than being bad]. That’s my drugs,” he told SLAM! Wrestling at the Rougeaus independent show in February 1999.

Charland got into wrestling at the encouragement of Mad Dog Vachon. The mat legend had met Charland when the youngster was into to judo, and told him to consider wrestling as an option. Charland listened, and took up amateur wrestling for a few years before turning pro in 1972 at only 16.

Charland debuted in the Montreal-based Grand Prix, and beat Pat Gerard Jr. in his first match.

His favourite time was in 1985-86 when he was International tag team champion in Montreal with King Tonga (now known as Meng). He was also tag champ with Sheik Ali (Stephen Petitpas). 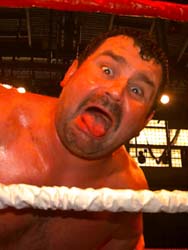 He wrestled under his real name most of his career, but there were a couple of other names he remembered.

Charland was Garth Vader for The Sheik’s Detroit promotion in the late 1970s; he was Mauler Malone for a couple shots in the old WWWF; and he was The Tempest on his initial tour of Japan at 18.

Richard ‘Le Manifique’ had the unique position of being managed during his career by both Eddie ‘The Brain’ Creatchman and his son ‘Pretty Boy’ Floyd Creatchman and the legendary Tarzan ‘The Boot’ Tyler.

Wrestling is just “a sideline” for Charland these days. He works in construction and wrestling is “a hobby, just to meet friends once in a while.” He’s scheduled to work the next Rougeaus show in Montreal on May 7.

He gave up the full-time wrestling dream in 1991.

“They didn’t pick up my number,” he surmised. “I didn’t get that break.”

I recollect meeting Richard Charland at Eatons in Sudbury during the 1980’s.I made the mistake of identifying him as one of the Rougeaus but he was cool about it. He gave us tickets to the show and waved to us as he pinned the Tonga kid.
David Williams

I had the pleasure to work with Richard several times in Tag Teams around 1983.
Richard was the kinda guy you always felt would make it huge someday. But in wrestling you never know when or if it’s going to happen. I hope all is well with you Richard and I hope to run into you again old friend. God bless you.
Sean O’Reilly

Richard Charland is one of the classiest people I have ever met. My dad used to take pictures for International Wrestling in the late 1980’s and Richard was a really fun guy to be around. He was extremely friendly and always be in the right position for a picture. In the ring, we always gave 100% and he was one of the best at working up the crowd.
Robert Larouche

Charland was a good crowd worker in the Sudbury area when International hit town. I use to sit ringside and yell every dirty name at him and Floyd Creatchman. He spit at me and I spit at him. After the match when the wrestlers were getting in their cars, I walked up to Charland and called a few choice names in his direction. He and Creatchman (noticing the crowd gathering) starting saying some unkind words about me and my girlfriend. I called him an S.O.B. and some other derogatory terms until Sheik Ali told them to get their asses in the car. Charland who wrestled with his tights half-way up his gut, seemed to have no bellybutton. My girlfriend yelled as they nearly drove over us “At least I have a bellybutton”, which probably went way over their heads.
Terry Fielding, Sudbury, Ontario

Always one of my favorite wrestlers. I liked his toughness in the ring. I especially remember his bout with Leo Burke when he went after him with a trophy. Broke it over his head. I liked his style and his moves especially his piledriver. I always thought he was inspired by Mad Dog Vachon for that move, but made it his own. A great wrestler!
Mike