Don Owen could see the writing on the wall. He knew the end was near. The legendary NWA promoter of Pacific Northwest Wrestling saw his business drastically taper off.

The Oregon State Athletic commission was making it next to impossible for Owen to run a profitable promotion. Cable TV was providing a cheaper alternative to a night out of wrestling at one of his shows. The WWF and WCW were in his backyard running opposite him in a territory he once ruled. There was nothing he could do.

So on May 30th, 1992 PNW closed its doors and with it came the end of Don’s reign as wrestling’s most beloved promoter.

“All the boys liked my dad a lot,” Don’s son Barry told SLAM! Wrestling. “He paid you exactly what he told you and treated the wrestlers as if they were family. His word was his bond.”

Now 88, Don Owen struggles to make it through each day. He’s had several surgeries, is hard of hearing and his wife is in a nursing home. Contacted by SLAM! Wrestling, he proved a difficult interview for those very reasons.

Instead, his son and his admirers speak for him.

“Don Owen was a very good man,” Omar Atlas told SLAM! Wrestling recently. Atlas, a wrestling journeyman who worked for virtually every major NWA promoter in his 30 plus years in the business, worked for Owen in the 1960s.

“He treated us like family. Each year he gave the boys turkeys for Thanksgiving.”

While other promoters conned and cheated wrestlers on their payoffs, Don was universally regarded as the most honest and straight promoter in the business.

“Don Owen was the best payoff promoter in the business,” remembered former NWA World champion Dory Funk Jr. During his tenure as NWA champ, Portland was a regular stop for Funk where he wrestled such stars as Stan Stasiak, Dutch Savage and Lonnie Mayne.

“Don paid the boys what he said right down to the penny,” continued Funk. “He was a classy guy.”

“Don had a good reputation as far as money guys,” said Dave Meltzer, editor of the Wrestling Observer newsletter. “He was a fair payoff man compared to other promoters and the guys who worked his territory were making good livings.” 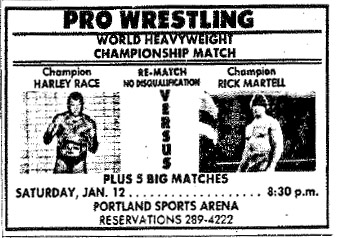 With the death of PNW came the closure of one wrestling’s best proving grounds for young talent. Don’s promotion was where wrestling stars were born, and where others went to gain invaluable seasoning.

Portland was where Maurice Vachon became the Mad Dog, where Jesse Ventura became The Body and where Roddy Piper became Hot Rod. Virtually every major star who ever became a name in the U.S. and Canada, at one time or another, passed through Portland. Many, including Tom Zenk, Billy Jack Haynes, Jimmy Snuka and Curt Hennig, even got their start there.

“Verne Gagne sent Jesse Ventura to us for the first three years of his career,” says Barry Owen of the current Minnesota Governor. “He really got his start with us.”

Other top stars first gained recognition in Portland. Maurice Vachon was tagged with the monicker Mad Dog by Don his first night in the territory after nearly causing a riot and getting into a fight with the police.

But perhaps the most famous name to come out of Portland was the single most influential wrestler in history and the man who changed the face of pro wrestling forever: Gorgeous George.

“He was married to a girl here in Oregon and she used to make his ring robe and outfits,” said Owen. “His wife put a lot of work into them so he took a long time taking his stuff off in the ring and really fussed over them and taking care of them. The outfits got more extravagant as time passed and he ended up taking more time.”

“You can imagine how this went over with an audience full of loggers and lumberjacks,” laughed Owen. “Here was this guy taking his time and they grew impatient and wanted the action to start. So he would use that and take even longer until the point where it became a part of his whole act. It really drew fans crazy. They were incensed.”

As a member of the National Wrestling Alliance, Owen’s Portland promotion was a regular stop for the touring NWA world Champion.

“From Lou Thesz to Ric Flair, we had every NWA champ come through here,” stated Barry. “They all defended against whoever was our top guy at the time. Of all the champs, Ric Flair was the best draw for us. Every time he came in, it was a sellout.”

Of the thousands of wrestlers who passed through Portland, Roddy Piper occupied a special place in Don’s heart. Although he had experience in other territories prior to coming to PNW, Owen was the first promoter to see potential in Piper and gave him his first big push in the business.

“Piper was one of the best talents we ever had,” says Barry. “He was just an incredible personality and a great worker. He really loved my dad, and the feeling was mutual. He was like part of the family.”

Piper left Portland but he never forgot Don Owen. During his wrestling travels, Piper always seemed to find the time to come back and make an appearance on Don’s TV show. Piper made his home and raised his family in Oregon, and was inextricably tied to the Owen promotion regardless of where he wrestled. He was very loyal to Don.

Even in retirement, Piper never forgot his mentor. He made a special appearance at a show on February 18, 1995 honouring Don for his decades of service to the sport, presenting him with a life time achievement plaque. Don was visibly moved that Piper returned to pay homage to him.

Such was the character of the man who brought out such loyalty out of people.

“It bothers him but he doesn’t say anything about it,” says son Barry. “He’s really not the type to complain.”

Wrestling is made up of promoters and wrestlers always scheming to get ahead. It’s a business based on hype. Don Owen brought less of it to the table than anybody else. He was a model of what a wrestling promoter should be. He will forever be remembered for the indelible mark of class, grace and dignity he left on this sport.

No one would fault Owen if he were upset over the hand that the wrestling industry dealt him in his final years. He certainly deserved much better.