Nine months ago, Mick Foley almost retired from professional wrestling. His Mankind and Dude Love characters had played themselves out. Injuries stemming from years of “hardcore” wrestling were taking their toll. The physical suffering and creative burnout he was experiencing didn’t seem to be worth it any more. Lucky for wrestling fans Foley had a change of heart.

“I actually thought wrestling had passed me by about nine months ago. I was debating whether or not there was still room in pro wrestling for Mick Foley. So, I started having a little more fun and it makes it a lot easier,” said the hardcore legend backstage to Slam Wrestling at a recent WWF SkyDome house show in Toronto. 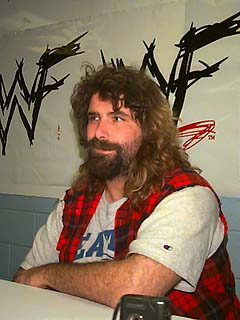 Going against the advice of his close friends Foley transformed the gruesome misfit known as Mankind into an amusing fan favorite. Creating the Mr. Socko gimmick and altering his grim portrayal of Mankind gained him a new-found interest in his work. Part of that whimsical attitude comes from Foley’s persistent ribbing of the WWF Hardcore Champion, Al Snow.

Behind the scenes, Snow and Foley are good friends dating back to their Extreme Championship Wrestling days. In fact, it was that nutty Mick Foley who gave Snow the idea to carry the head of female mannequin to the ring as his ECW “manager”. Al Snow and his Head have been inseparable ever since.

Their camaraderie aside, the ECW alumni are priming themselves for a hardcore WWF feud which is sure to be a classic. The impromptu insults are meant to get the ball rolling though even Foley concedes he’s taken things a little too far. According to Foley, he had a meeting with an irate Snow and admitted he was a “sick man” addicted to making fun of him. They agreed to a truce. A truce Foley soon broke while speaking to Slam Wrestling about being inducted into the Setauket, Long Island, Sports Hall Of Fame.

“They (the reporters) asked me if I was nervous and I said I was queasy and that the last time I felt this sick to my stomach was after watching one of Al Snow’s matches,” said Foley causing members of the media gathered in the locker room to break out in laughter.

Not so fast Mr. Foley. This reporter couldn’t allow that blatant breach of a gentleman’s agreement to go by unanswered. Why does Foley keep breaking his promise to poor old Al Snow?

“I just can’t help it. It just seems to be something I like,” he explained. “You have to have something to look forward to. Living on the road, especially when you’re beaten up, it’s kinda tough and I find that making fun of Al passes the time.”

The jabs are going to keep on coming too as Foley will continue slogging through a rigorous schedule. There will be no time off even though doctors have recommended that his damaged knees be operated on. Foley said leaving now would be like “abandoning ship”. The 16-year veteran has waited so long for this lucrative wrestling boom that he doesn’t want to miss riding that wave of mainstream popularity.

Well ahead of the nineties resurgence Foley bounced around from federation to federation. IWA. ECW. WCW. WWF. You name it, Foley has broken bones for them. The Big Two promoters finally took notice of his “hardcore” reputation courtesy of his stint in ECW. Those who’ve closely followed Mick Foley on his wild ride to superstardom remember the 1995 IWA Death Match tournament in Japan as his crowning glory. Foley bested Terry “Bam Bam” Gordy, Leatherface, Tiger Jeet Singh and other top talent in a psychotic, one night, King Of The Death Match tournament. Barbed wire. Exploding platforms. Steel chairs. Beds of nails. Baseball bats meshed in barbed wire. A bloody and burned Foley survived it all.

“I had seven stitches in my hand, fourteen behind this ear, twelve in my head and seven over my eye as well as second degree burns. For that I got three hundred dollars,” said Foley claiming the IWA promoters treated the talent so badly that the wrestlers had to ask fans to buy them drinks out of a pop machine between matches because no complementary food or beverage was provided.

In the final match of the tourney, Foley took on his pal and mentor Terry Funk. The ring ropes were replaced by barbed wire. There were exploding – barbed wire planks and the squared circle itself was set to be engulfed in a fiery explosion once a timer had counted down. It was a fitting finale to a day of heinous carnage. Then something went wrong. The climactic explosion went off with a whimper rather than a bang. There was smoke but no fire. The fans were disgusted.

“If you look at the tape, I’m actually holding my ears. It was like someone shot four Roman candles off. If you ever want to hear the sound of thirty thousand people farting, that was it,” said Foley.

Funk and Foley understood that it was up to them to bring the crowd back into it. Foley threw a ladder into the ring and that’s when most of their injuries occurred.

So the question must be asked…What propels a man to be broken, beaten and bashed to a bloody pulp as pro wrestling’s preeminent Crash Test Dummy? It’s the respect of the fans that drives Foley to higher and more dangerous heights.

“I think there is enough people out there who understand what I do to make it worth while,” said an appreciative Foley heading back to the locker room to ready himself for another beating.