Chris Benoit is well aware that the WCW World Tag title that he co-holds with Dean Malenko is basically worthless. But he’s trying to do something about it.

“They [WCW] haven’t done nothing with them. There haven’t been any storylines, any controversy,” Benoit told SLAM! Wrestling. “I think that it will take a while to make them mean anything again. It’s definitely possible. But we’re going to have to take baby steps to get there.” 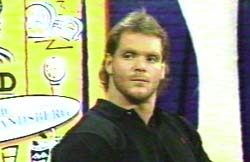 Chris Benoit on TSN’s Off The Record show Tuesday night.

Up next, he hopes, is a feud with Raven and Perry Saturn, whom the Horsemen faced this past Monday on Nitro. It’s a natural feud, considering all four men spent time in ECW.

While on the subject of Nitro, there is no question that Benoit is excited about next Monday’s big show at Toronto’s Air Canada Centre. He guessed that he hasn’t wrestled in front of a Canadian audience since WCW’s last Toronto show — in 1993.

“I’m really looking forward to it,” he said on the phone from the TSN studio, where he had just taped an episode of Off The Record. “I’ve been waiting. Ever since Bret [Hart] first started in WCW, [Chris] Jericho and I have been, like, ‘why don’t you guys go up there?’ … It’s beyond me why we’re not running Vancouver, Edmonton, Calgary, Saskatoon, Regina, Winnipeg, right out to the East Coast.”

But will a cross-Canada tour ever happen with WCW?

“I’ll never say never. Not in this business. But right now, with the way it is, no. It doesn’t look like it will.”

It’s certainly no boost to a Canadian’s confidence when WCW has informed Benoit that he won’t be needed in Kitchener, Ontario on Tuesday for the WCW Saturday Night taping.

Benoit is happy that he’s finally a world champion, but insists that belts aren’t important to him.

“I’m not one for titles or accolades. I really love what I do,” The Canadian Crippler explained. “My biggest thing is going into the ring and having a good match, no matter who it’s with or what it’s about. That’s basically where I get my satisfaction out of this business.”

In conversation with Benoit, one gets the impression that he’s not 100% happy with the direction of WCW and his character. But he recently signed a new contract, and will be around for another three years.

He’s heard the ‘Vanilla Midgets’ nickname for the Benoit – Malenko team, but never to his face in the dressing room, “just through the sheets and through fans talking.”

Is the company fully behind pushing the world tag champs?

“They say they are. But what they say and what they do are sometimes two different directions,” sighed Benoit. “People will ask me, how does it feel to be a Horseman? If I think about the tradition and all that, what the Horsemen have been about, it’s an honour. But what are they going to do with it? If they’re just going to s**t all over it and no do anything, it really doesn’t mean anything to be a Horseman.”

When asked if Ric Flair, WCW World Champion and leader of the Four Horsemen, is going in his own direction and out of the group, Benoit replied with a cryptic “we’ll see” before continuing. “Right now with WCW, it seems that there’s no real direction. Hopefully, over time, it will pull together and find some direction.”

In Benoit’s ideal world, he’d be able to set a little more of his own direction. And much of it would be to stops outside of WCW.

He’d also like to do a shot for the re-born Stampede Wrestling, but like friend and countryman Chris Jericho, doesn’t think “the company will allow that.” 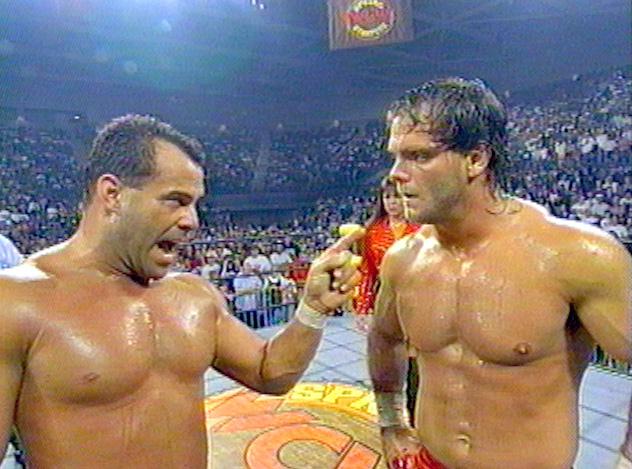 Chris Benoit and Dean Malenko from a couple of years back in WCW when the two weren’t tag partners.

In a recent interview on the WCW web site, Jericho said that his dream match would be against Benoit for the world title. Benoit would jump at the chance.

“I love wrestling Chris. I think he’s a tremendous wrestler all-around. He can wrestle all styles — European style, Mexican style, Japanese style, American style. Right now, when it comes to American-style wrestling, he’s developed his character and his ring presence is just unbelievable. I’m really proud to say that he’s from our generation. I enjoy every time I’m in the ring with him.”

Bret Hart is the other big-name Canadian in WCW, and Benoit freely admits that backstage politics have kept Hart down. (On Off The Record, he called WCW honcho Eric Bischoff “somewhat of a genius”.)

“Obviously there’s some kind of politics involved, because that’s a lot of what this business is about. Personally, I don’t agree with how they’ve treated him or what they’ve done with him,” Benoit admitted. “Bret’s one of the most talented in the business today. He can wrestle, he can interview, he’s very entertaining to watch. He’s an all-around athlete as a wrestler. Personally. I don’t agree on what they’re doing or what they’ve done with him. Hopefully that will turn around. Bret’s a great role model also.”

Regardless of politics, Benoit will continue to shine in the ring. He takes great pride in his performances. For him, “wrestling is really a form of art” and Benoit is undoubtedly one of the top artists in pro wrestling today.

“I love the challenge of going out there, doing the best that I possibly can.”