‘Big Show’ Wight testifies in his own defense

At the second day of his assault trial, 7 foot tall, 420 pound, WWF grappler Paul Wight told a Long Island court room that the actions of a rowdy fan frightened him into defending himself. Wight took the stand yesterday saying Robert Sawyer’s actions last summer in the lobby of Uniondale’s Marriott Hotel “scared the ever-living s–t” out of him, reports Newsday.

Wight contends that Sawyer – who admitted drinking that night and following Wight and other wrestlers from the nearby Nassau Coliseum to the Marriott Hotel – started insulting him at the front desk. According to the Newsday story, Wight claims Sawyer went into the crowd of fans and began making “loud, lewd comments and gestures.” 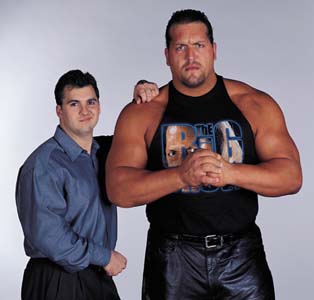 Wight says that when he tried to calm the 6-foot-6, 224-pound fan down, Sawyer shoved and threatened him. Wight responded by punching Sawyer breaking his jaw.

In his testimony on Monday, Sawyer said he never laid a hand on the superstar.

Brian Davis, Wight’s attorney, presented witnesses to the confrontation. David Wexler – a fan who was in the lobby that night and saw the incident – said Sawyer, 30, was trying to bully Wight into a fight.

In their closing statements, Assistant District Attorney Mike Garron countered by telling the court that at no time did Wight ever try to back away from a fight or locate hotel security. Davis said Wight defended himself and that his actions were reasonable.

Judge Thomas Feinman is expected to rule on the case Wednesday.