Jericho’s future up in the air

Chris Jericho does not claim to have all the answers.

He is not sure if he will be fighting at the Air Canada Centre in Toronto on March 29. 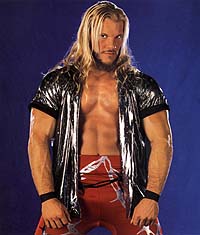 “We never find out until the last minute,” Jericho said in a phone interview Tuesday with SLAM! Wrestling. “Hopefully I’ll be there.”

It would be the Calgary native’s first match in Canada since he fought at the Molson Centre in Montreal two years ago.

“I’ve never wrestled before in a big venue in Canada except for the Molson Centre,” he said. “I kind of wish it could have been in the Gardens.”

One thing that Jericho is certain of is that neither he or fellow Calgarian Chris Benoit will not be wrestling for Stampede Wrestling in April.

“They inquired as to the chances of that,” Jericho explained. “It couldn’t work out. We had a bunch of other responsibilities and other plans.

“It would be have been fun,” he added. “It can’t work out, but maybe in the future.”

But Jericho has other more pressing issues to deal with before concerning himself with Toronto or Calgary.

He is fighting Perry Saturn in a dog collar match at WCW’s Uncensored on Sunday.

“I’m the master of the dog-collar match,” Jericho boasted. “I’m hoping to beat some sense into his head and get him out of that ridiculous frock he has decided to wear.”

Another piece of unfinished business on Jericho’s plate is about where he will be wrestling in the next few months.

Tuesday evening on TSN’s Off The Record, Jericho said that his contract with WCW will expire in four months.

But rumours of Jericho staying or leaving have been swirling around the internet for months now.

“Most of the stuff you read on the internet is not true,” Jericho told SLAM! Wrestling. “As far as that $920,000 offer or whatever that it is absolutely not true.”

Either way Jericho is happy with his current persona.

“I enjoy what I’m doing,” he explained about his colourful character. “I think if the performer’s having a good time, chance’s are that you (the fan) will as well.”

One would never claim that Jericho’s character has been boring.

“I get ideas thrown at me, but most of the stuff is just me doing it, me creating it,” he said. As for his overweight, dress-wearing, ‘security specialist’, Ralphus, Jericho said that he came up with the gimmick and enjoys working with him.