Iron Sheik still in the game

“When you think of bad, it is impossible not to think of the evil Iron Sheik.”

That’s what I wrote in my very first issue of the Canadian Wrestling Report, way back in 1985. Sure, I was just a kid getting into the whole rock’n’ wrestling thing, but I meant what I wrote. I hated the Iron Sheik, and his partner Nikolai Volkoff. And their manager, Classie Freddie Blassie, what a pain he was!

Fast-forward fourteen years to January 17, 1999, as I’m interviewing the legendary Iron Sheik at an Apocalypse Wrestling Show in Toronto for SLAM! Wrestling. 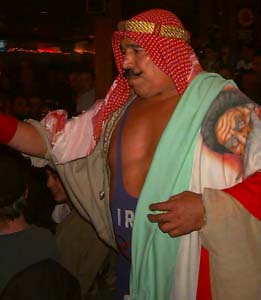 Iron Sheik at the AWF show in Toronto. — Photo by Greg Oliver

You could take his appearance on the independent show in two ways. One, how the mighty have fallen, wrestling in front of a couple of hundred people at a sports bar. Or two, this is a man who still enjoys wrestling and can’t get it out of his system.

After my talk with The Iron Sheik, there’s no question which way I see him.

“Wrestling’s always in my heart,” he said, in his clipped, deep voice, while wearing a WWF t-shirt and a toque.

He wrestles 10-15 times a month these days, “coast to coast, all over the world”.

But Sheik, I say, how much longer can you keep this up? Some speculate that you are well into your sixties!

“Wrestling is toughest sport,” he replied. “As long knees okay, back okay, ankle is okay, I keep going.”

That night, he was scheduled to go one on one with the Madman From The Sudan, Abdullah the Butcher. The main event was switched around, and Sheik teamed with Pretty Boy Chuck Simms against Abby and Sheik Mustafa. The match ended with Sheik and Abby brawling through the bar, and both busted open. In the grand scale of things, it was hardly a classic. But who does The Iron Sheik think was his toughest opponent?

“[If] you’re talking about Canada, the toughest one I had was against Angelo Mosca. I beat him. I become heavyweight champion of the Canada,” he said, referring to their classic battles from the real early 80s in Toronto when he was billed as Great Hussein Iron Sheik. “And then also United States, it was six years, Mr. Bob Backlund. Nobody beat him. Madison Square Garden. I beat him in the Garden. And another of my toughest match was Bruno Sammartino and Hulk Hogan.”

The Iron Sheik was WWF World Champion from December 26, 1983 to January 23, 1984, and was the transitional champion to hand the reigns over to Hulk Hogan. It had been a ten-year odyssey for Iron Sheik. He came out of the 1972 Olympics, and into Verne Gagne’s hands. He learned the pro game and debuted in 1973.

Following the lead of Gagne, Iron Sheik got involved in training other wrestlers. He trained Rick Steamboat, Buck Zumhoff, Jim Brunzell, Greg Gagne among others, and had a hand in training Bret Hart.

“Still I train, sometimes if I have time,” he said. He obviously treasures the impact that he has had on wrestlers, and was signing photos that he brought of him with Stone Cold Steve Austin.

Besides the people he trained, and the defeat at the hands of Hulk Hogan, Iron Sheik is remembered for his epic battles with Sergeant Slaughter, and his WWF tag team title reign with Nikolai Volkoff. The Russian and the Iranian beat USA Express (Barry Windham & Mike Rotundo) at the first WrestleMania, March 31, 1985 for the tag belts, and lost them back to them June 17, 1985.

Politics obviously played a big part in his career.

“My heat was a natural because I was a real Iranian and you know Ayatollah Khomeini keep the people over there 444 days,” said Sheik. “I was not involved with the politicians but the people didn’t like me carrying Ayatollah picture, Iranian picture. But I just say, that is my country, and I was proud … I grew up with the sport of wrestling, not politician.”

Iron Sheik didn’t seem concerned about the legacy he will leave behind one day.

He expects to be back in the WWF or WCW in some capacity in the future, likely helping to train and mentor the next generation. His latest gig in the WWF was managing The Sultan, but that didn’t last because “Sultan get hurt and he have to leave the country and he just left,” said Iron Sheik.