Thunder game has its flaws

Playing WCW/NWO Thunder is like watching the real TV show. After playing for two hours you wondered why you bothered. 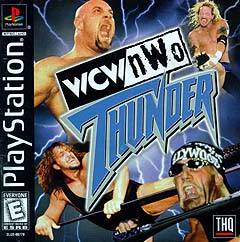 Much like the Thursday night WCW wrestling show (seen on TBS and SportsNet in Canada) the flash is all there but there’s still something missing even though the graphics are the second to none. Sure. There are solid video clips shown before each WCW superstar comes to the ring. Still, you wonder why they would not have each wrestler use their trademark phrase as they enter he ring?

The players seem to move naturally which is good to see. Some of them move a little too naturally as a matter of fact. Watching Hulk Hogan or the Hitman complete a Frankensteiner or a set of flying leg scissors is a little unnerving to say the least. While it is true that all the wrestlers need to compete on an equal plane, the instruction booklet says that these are the types of moves meant for smaller wrestlers.

The highlight of Thunder is the options that the game contains. You can have a battle royal or a cage match or you can compete for all the WCW titles. You must win five matches for the Television Title, seven for the U.S. belt and ten to become the WCW World Heavyweight champ. As a foot note: the first time I competed for the World Title I used Buff Bagwell. The computer gave me his co-hort Scott Steiner as an opponent. Go figure.

The game allows you to use three signatures moves for each wrestler, the Hogan Legdrop, the Sharpshooter or even Ric Flair’s Figure Four Leglock. Oh, did I say Ric Flair? I shouldn’t have. That’s right, the 13-time WCW World Champion is AWOL. Flair’s absence is understandable because of his contract problems, but a WCW video game without him seems strange nonetheless.

The game also has the option to use all different kinds of music in the background as well. The themes to all the recent pay-per-views as well as Thunder are all available or you can set the music at random.

The best option is the game allows the player to decide how many foreign objects they can have. The objects range from chairs to baseball bats. Another great rule-breaking part of the design permits the competitor to bring in another wrestler to help in a run-in. If the player is some sort of freak who does not believe in cheating, he can exercise the option to turn off the cheat modes.

This game has its moments. There are many moves but it seems as though the wrestlers are extremely slow to react. So, if you are still on the lookout for a great wrestling game you are going to have to keep searching. However, if can overlook the flaws Thunder will entertain the die-hard gamer.