Getting ‘Whacked’ by Luke and Butch 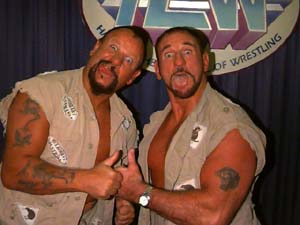 The Bushwhackers at the ICW Hamilton show. — Photo by Greg Oliver

After waiting around in the media room for about two hours, I was lucky enough to get a few words with the tag team legends.

The two former sheep farmers from Wellington, New Zealand, were quick to point out that Canada is where they got their first major break in pro wrestling as the Kiwis.

“Actually, the first place we came to in North America, was Canada. It was a place called Montreal, with Grand Prix Wrestling. That was our first introduction to pro wrestling in North America. There’s a great bunch of wrestlers there and it was just a great experience.”

(At this point it is necessary to say that it is next to impossible to tell them apart, in person or when transcribing an interview! Suffice it to say that they speak for each other.)

The brutality from the sadistic cousins was to much for the wrestlers in Grand Prix, and the two wasted no time in snagging the tag team straps.

From there, they renamed themselves the Sheepherders, and headed south to the Mid-South (later UWF), with Bill Watts. Luke and Butch tore apart the Mid-South scene, engaging in feuds with the likes of the Fabulous Ones, and a The Fantastics. Feuds like these gained them the reputation of being two of the most violent wrestlers in the world.

Any resentment that people think that ECW invented the ‘hardcore’ style, even though they were doing over a decade before?

From there, they did a small stint with the NWA before heading to Puerto Rico, which now they wish they hadn’t done.

They returned to the NWA for a short time, then they got the call from Vince McMahon.

“He saw us in the NWA, saw the talent and they saw there was a chance to make some big money with us. So we went up there and Vince said ‘we’d like you to do something different’, didn’t say what it was going to be, we didn’t know what it was going to be, but he gave us the name the Bushwhackers, and we came up with our own style. Now we have fans from three years old, to ninety-three years old, and it seemed to fit all ages and all styles.”

Is it hard going from violent savages, to licking small kids faces on the way to the ring?

“Not really mate, because the wrestling business has changed over the years, so to stay with it you have to change as well. We were still aggressive in some styles, but not so aggressive with blood and guts and everything else not shown on national TV at the time. Our fans couldn’t believe we went from the Sheepherders to the Bushwhackers, but as we said, you have to keep up with the times. Vince was a great guy as well. Obviously, everyone knows we could’ve been used stronger then we were, but we had a great time.”

Even though the Bushwhackers aren’t in any of the big three promotions, don’t think they’re not busy. Other than wrestling numerous dates, they’ve opened up a wrestling school in Florida.

So how long before they hang up the tights?

After the show, I asked a couple of young kids what they thought of the Bushwhackers, whom they had just seen in a match against The Headshrinkers.

“They were cool! They rocked, Bushwhackers rule.”

We’ll likely be seeing a lot more of Luke and Butch.