Frank Valois made ‘Giant’ contributions in his 38 years in wrestling

Frank Valois was both a successful wrestler and promoter around Montreal for more than four decades.

After retiring from the action, he got involved with the Montreal promotion, and was responsible for the French TV show Les Etoiles de la Lutte in the 1980s. 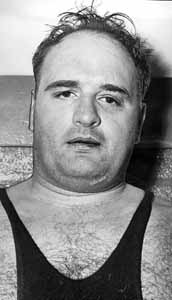 Besides his wrestling and promotion, his biggest claim to fame — literally — was getting Andre the Giant involved with pro wrestling, and was his business manager for first five years of Andre’s career.

My name is Francoise Valois, I am Frank’s youngest child. Most of you know of my father as a real dirty, low-down wrestler. But what some of you do not know is that Frank Valois was one of the few wrestlers who was respected by both the wrestlers, heels and babyfaces alike and most of all the promoters.
He never showed up late for a match, sick or not. He always gave is 150%. My dad beleived that you gave back what you got. You were treated right so you treated others right. I remember asking him once, why when people threw things like beer or cigarette butts at him, that he did not retaliate and he said why. These people paid to see me wrestle and this is their way of showing that I did a good job, why bother them.
My father was one of the most honest people I will ever have the good fortune to know. He was always there with a helping hand, wether for family or even total strangers.
I know that he loved is work and was proud of what he achieved. He once said. ‘Talk nice or bad about me, I don’t care, as long as you talk about me.’
I’m sure he would be very happy to hear all the wonderful things people are saying about him. One thing though, I’m sure he would be even happier if he knew that people did not forget the older wrestlers, the REAL WRESTLERS, and not just those made up clowns, who call themselves wrestlers today. These guys fall out of the ring onto mattresses, not cement floors (too hard for them), they take planes to get to their matches (driving is to long and boring for them). These guys have to be paid thousands of dollars just to show up a venue, and if there are not enough people in the stands, they only give 50%. They should remember that it is the fans who pay their salaries.
Thank you on behalf of my sister Michele and I for the genuine sympathy, we received upon Daddy’s death.
Francoise Valois

I am Frank Valois’ grand daughter.
I am so proud that he is remembered for what he truly was. He was one of the best. He was a true wrestler at heart. Even after he retired he still talked about how he felt a rush when he stepped on the ring. He wasn’t the kind of wrestler that only played for money. He played for the people. He was sort of a hero in a way. Maybe people don’t understand but he cared about the family more then anything in the world. He kept us together. He would bring us along on his trips or to matches. He will always be remembered in our hearts as a hero and I hope he will be remembered as a hero for other people who met him or just caught a glimpse of him on the street. I am proud to say he was a special man
Pascale Valois

Frank Valois gave Québec wrestlers another chance after the fall of the Grand Prix Wrestling in the 70’s by regrouping them, and afterwards promoting them in a famous French wrestling show called “Les Etoiles de la Lutte” in the 80’s. The former Paul Sauvé Arena, as well as the legendary Forum, relived these famous wrestling years with top quality bouts and excellent promotions. Unfortunately, the coming of the WWF wasted all that. But Valois gave dignity back to a sport denied after so much controversy…
Claude Leduc, Montréal, Qc

What a difference a couple of decades make. I remember back in the ’70’s tuning into Les Etoiles de La Lutte, and Les As De La Lute on TVA on French TV, and Grand Prix Wrestling on English television. Talk about great wrestling. The matches were so exciting. Wrestlers would come to Montreal from all over North America. I even remember Black Jack Mulligan chasing me down Close street, just in back of the Montreal forum. Or the night that Rick Flair met Raymond Rougeau at the forum. What a match. Ray was so frustrated at not being able to beat the great Rick Flair. It was an exciting match. Or the classic Joe, and Paul Leduc matches as a tag team.
I guess I speak for many frustrated wrestling fans in saying that it would be nice to see wrestling come back to this state, where wrestling counted for something. We have the likes of Bob “Legs” Langevin, Gino Brito, and of course the late Frank Valois for providing us with so many years of great memories.
Randy McElligott