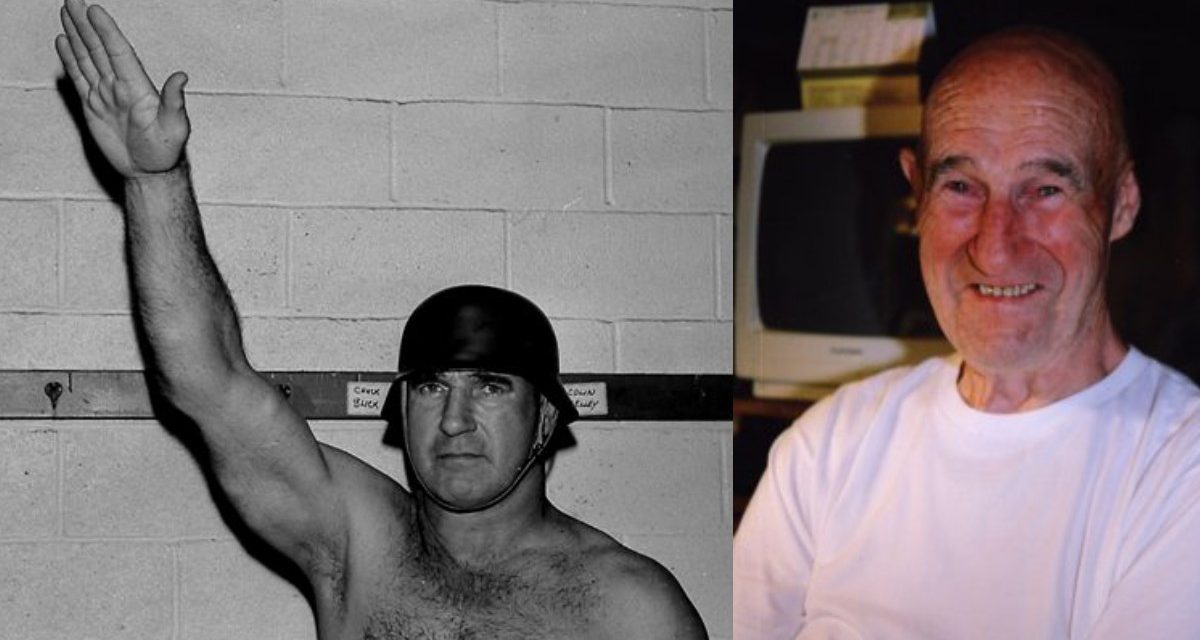 In his heyday during the ’50s and ’60s, Hans Schmidt was one the most hated wrestlers alive.

He portrayed an evil German, and at 6’4″, 250 pounds, towered over most of his opponents.

When SLAM! Wrestling tracked him down, he at first seemed a little reluctant to talk about his past.

“I quit wrestling 20 years ago. I’m not interested anymore!” he said, laughing. 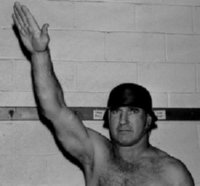 Since he quit in the mid-70s, Schmidt (real name Guy Larose), claims that he has been doing “nothing” at his home in the Laurentians north of Montreal, “up in the hills with the hillbillies.” When prodded, ‘nothing’ included raising two children, working out and doing a lot of skiing.

Larose started wrestling after the war in the 1950s. He was a pretty good amateur wrestler before turning pro.

“In those days, it’s not like today,” explained Schmidt. “Today anybody can be a wrestler if they’re big and full of muscles. But in those days, it was harder. You had to have had a background of some kind, like an amateur wrestler because there were a lot of old-timers that were hard to get through. It was hard to get into the game, anyway.”

But how did a good French-Canadian lad from Joliet, Quebec become a hated German?

“It was hard with a French name like that,” he said, referring to his real name. “When you got to the States, people were making jokes, funny names and stuff like that. I met a promoter in Boston, Paul Bowser. He was German and he told me I looked like a German. That’s when he gave me that name, Hans Schmidt.”

Under his new ring name, he faced every big star going at the time — Lou Thesz, Argentina Rocca, Verne Gagne, Edouard Carpentier. Near riots followed in his wake on more than one occasion.

He had legendary feuds with both Whipper Billy Watson and Johnny Powers, and formed formidable teams with Dick ‘The Bulldog’ Brower, Hans Hermann and Fritz von Erich.

‘The Teuton Terror’ used a backbreaker as a finisher, but also excelled at the piledriver.

Schmidt was a star all over North America, but it was Japan that stood out for him.

“I liked Japan because they treat wrestlers pretty good there. I made five trips there.”

When asked how many matches he might have wrestled, he laughed and laughed.

“Oh my God, I’ve never counted! I’d be scared stiff to count them! Too many! Like I said, too many trips to the ringpost.”

As any oldtimer will tell you, things were different back then.

“I wrestled so many times. Sometimes I was wrestling six, seven or eight times a week. We had to do TVs in those days, and sometimes on the same day, like a Saturday, they were making tapes and we wrestled two, three times, two three matches in different spots.”

He doesn’t watch today’s wrestling shows, because they make him mad.

“I don’t want to see that. It’s a show now, it’s not even funny. It’s like the hockey games, all they think about is making a lot of money. They don’t about wrestling itself. They don’t care about what they’re going to show. It’s terrible.”

But “that’s what the young generation likes — a lot of bulls—, smoke in the air, firecrackers, you name it.”

Near the end of his career — which by his guess was 1975 or 1976 (“so long ago I can’t even remember”) — he stayed active with the Montreal promotion.

“I was on my way out. I didn’t want to wrestle anymore, but they were bothering me. They were calling me everyday. I wanted to quit earlier, but they didn’t want to let me go. They said ‘you’re still good, we need you.’ The territory was down, so they said ‘could you help us?’. So I did for a while.”

I wrestled with Hans in 1983 for a Independent in Montreal. I wrestled under the name of Sean O’Reilly. Real name William Decoff. I was 1/2 of the International Tag team champs with my brother Tim. (Joe Maher)
I was working full time for a NWA office that was trying to get off the ground in Springfield, Massachusetts. They brought up a slew of “big” names. Backlund, Carlos Colon, Superstar Graham, and a few others.
I got a call one day from Killer Kowalski who got Tim and I booked in Montreal.
“They’re gonna put you over!” he screamed and spit in the phone. We went up for a couple of TV tapes and I met Hans. He took Timmy and I under his wing and spent the Spring of 1983 teaching us how to work and the proper manners in the business. So we could make money and not get ourselves killed. He was working as a babyface so he was always around us.
Towards the summer Tarzan Tyler, who was the booker, turned him heel and was teaming him up with Mad Dog Richard to wrestle Tim and I. I was in Springfield wrestling when I found this out. I told Billy Graham how stressed out I was at the thought of working with Hans.
Billy put his arm around me and said “Sean, Hans is from the Thesz era. I know you want his respect and here’s how to get it. During the match, leg dive him down, when you push him in the ropes I want you to give him a chop that would make Wahoo McDaniel proud!”
Billy was almost a God to me. He would never give me bad advice. In Verdun, Quebec, the night came. The O’Reilly Brothers defending the International Tag team title against Hans Schmidt and Mad Dog Richard. It was halfway through the first fall when it happened. I got Hans in the ropes and gave him a Pedro Morales style open front hand slap in the upper chest and neck that brought the house dead quiet. Hans stood in the ropes a hardly flinched. He looked at me. My heart sank. I’m about to die on foreign soil. He said “huh….a butter fly landed on my chest.” I backed away, put my hands out, and said ‘It’s not my fault! Superstar Billy told me to! He also told me to leg dive you but I didn’t!” He glared at me but we worked the rest of the match without incident.
I worked my way over to the heel dressing room and apologized, and told him what Billy told me to do. Hans laughed and told me it was the oldest gag in the business. He said “years ago I told the young guys how Thesz liked to be suplexed and how Danny Hodge liked to be slapped in the face!”
Then it was time for the Battle Royal. The Hangman was going over. The last four in the ring were to be Tim, Me, Hans, and Neil. I should have known something was up when I found Tim getting tossed halfway into the match. I found myself alone with Tarzan Tyler, Hans and Neil. Tarzan put me in a full nelson. Hans stood in front of me and spit in both hands.
“SO you’re the guy who wants to be a rassler..huh?” He backed off, wound up, “here’s your receipt for that slap’ he chopped me so hard I thought my upper sternum cracked. He wound up again and said “this is for just thinking about leg diving me” crack. I thought I was gonna pass out. Needless to say when Christmas came that year I knew Hans’ glove size because it was on my chest!
Hans was by far the classiest guy I met in the business. I was disappointed with so many guys. But Hans was the best. I hope you enjoyed my recollection. I’m 38 now. I no longer enjoy wrestling. The changes, the fireworks, the business I love has gone the way of the T-Rex. But one things for sure. I wrestled one of the True legends and I did it 13 times! Hans, God bless you and keep it between the trees!
Sean O’Reilly (William Decoff)

Hans Schmidt was the meanest wrestler ever in the history of wrestling. I think today’s villains could take a lesson in meanness from him. No gimmicks, well the German angle maybe, but all work and his meaness was by action, not talk.
As a wrestling fan, you hated Hans Schmidt, so much, that you actually liked him! A paradox, maybe, but think about it. I remember watching him mostly out of Buffalo on the 6:00PM Saturday wrestling shows.
Scott, Strathroy Ontario

I have only seen Hans Schmidt wrestle on tapes, but through research I have done on Milwaukee, WI wrestling, I can say that he was the most hated wrestler to have ever appeared in Milwaukee. On one occasion, irate fans discovered which hotel he was staying at after one of his main event matches and went there to basically string him up. Police had to be called to disperse the crowd. He had been advertised as having spent 2 years in a French POW camp during the war, and the newspaper did a huge article about the dangers of inciting crowds with such publicity and ring antics.
Another time Hans substituted for Edouard Carpentier in teaming with rival Verne Gagne to go against the Volkoff Brothers. At some point in the match Hans joined the Volkoffs and turned on Gagne. This started a full-scale riot and wrestling was suspended for a while from the Auditorium and Arena.
-George Lentz

I once as a child was at CFTO in Agincourt Ont and Hans was choking the Hillbilly Kid, with the tag team rope around his neck and jumping on his back.
My Dad got so upset, he took off his size-13 Oxford shoe and hit Hans in the back. Hans was not happy and said “You ##$$$%% come up here!” My Dad said “You #$$%% come down here!” A stand off!!
My dad’s shoe had flown across the ring. All this time I was terrified. I got home in Milliken and my neighbour’s kids all come over and said we saw your Dad on TV — did he get his shoe back? I think so…but he didn’t’ get beat up. LOL
Those were the days before video games….priceless memories.
John Thompson, Marmora Ont.