Harley longs to be back in the Race

CHERRY HILL, NJ — When baseball’s Mark McGwire and Sammy Sosa were chasing home run records, every announcer talked about the history — namely that they were following Roger Maris and Babe Ruth.

“I don’t see a celebration too much in any sport of any older people,” said Race at the NWA 50th Anniversary convention, where he sold T-shirts with wife B.J. and was honoured at the banquet. “Once that TV flashes off on your career, and you’re not on there on a day to day basis, it doesn’t take too long for people to forget who you are.”

Judging from the fans at the convention, Race hasn’t exactly been forgotten but he isn’t top dog anymore either.

Race took the time to talk to Slam Wrestling as he signed about three hundred photos from a collector. For each signature, the collector paid $10 US.

“If you get tired doing interviews and signing autographs, then you should never have gotten involved in the business to start with,” sighed Race in his matter-of-fact, quiet drawl of a voice. It’s a voice that you lean into, wanting to absorb the wisdom.

“I was one of the most fortunate people on Earth to do exactly what I loved to do all my life,” he said. “I started in this business when I was 15 years old and 39 years later I had an automobile accident that took me out of it.”

If it wasn’t for that accident in 1995, Race is “fairly sure” that he would “be in the ring at least part of the time” and that he would “definitely still be involved in wrestling.”

It wasn’t the only major accident of Race’s career either. Shortly after he started wrestling in 1959, under the tutelage of Gus Karras, he was in a serious car accident. Doctors told him that he wouldn’t wrestle again, but, as the history books show, he proved them wrong.

He first won the NWA World Championship on May 23, 1973 from Dory Funk Jr. Race held the title for four months before Jack Brisco took it away. On February 2, 1977 in Toronto’s Maple Leaf Gardens, he climbed on top again, this time defeating Terry Funk for the world title. Five or six more reigns followed, depending on if you count a 1984 title switch between Ric Flair and Race in New Zealand, that continues to be unrecognized by the National Wrestling Alliance.

Race doesn’t believe that a genuine world title with credibility and a touring champ will ever exist again.

“I would like to see that but the chance of it doing that are Slim and None and Slim’s already left town.” 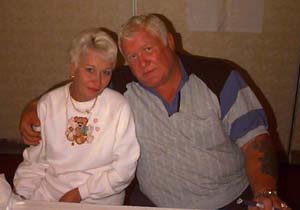 Besides the world singles titles, Race held the AWA World Tag Team Titles with Larry ‘The Ax’ Hennig (Curt’s dad) for almost two years, off and on in the sixties. He was also a champion of Central States, Missouri, Georgia and countless other regions. Managed by Bobby ‘The Brain’ Heenan, Handsome Harley Race spent his final few in-ring years in the WWF, including a reign as King of the Ring and a feud with Hulk Hogan.

Having learned from Heenan, Race was a manager for a time in WCW, and helped Lex Luger and Big Van Vader to world title reigns.

In-ring, Race was methodical, never flashy. But almost always victorious. He was legitimately tough in and out of the ring and everyone knew it. The figure-four was his feared finisher.

But what really stands out as a career highlight for Race?

“Well, I think you’d be a little bit less than honest I think if you wouldn’t say, in this business, the first time you become world’s heavyweight champion,” he explained in his humble way.

As for the opponents that stand out, he makes an effort to explain rather than just outright picking.

“I always answer this with a two-phase answer. As far as far just pure wrestling ability, it would be someone like a Dory Funk Jr. or Jack Brisco. The rough-house would be Dick The Bruiser, Bruiser Brody, someone of that caliber.”

The Central States territory was his favorite because “it was home” and near to where he was born in Quitman, Missouri. Other than that, I’d say it would be a flip of a coin between Australia and Japan.”

Harley Race ventured up to Calgary on more than one occasion to wrestle for Stu Hart, and brought that up when he learned the reporter was from Canada.

“I really enjoyed going to Calgary,” he said. “Two reasons. I loved to wrestle out there. The other is the Hart Family. I’ve known Bret, I’ve known every one of the Harts since they were just little kids. That time of the year, when you go out there for the Stampede, the weather couldn’t be nicer. It’s when you go out there in the dead of winter it becomes unbearable.”

Race even plans to head up there again soon, as he holds a driver’s license that needs renewing.