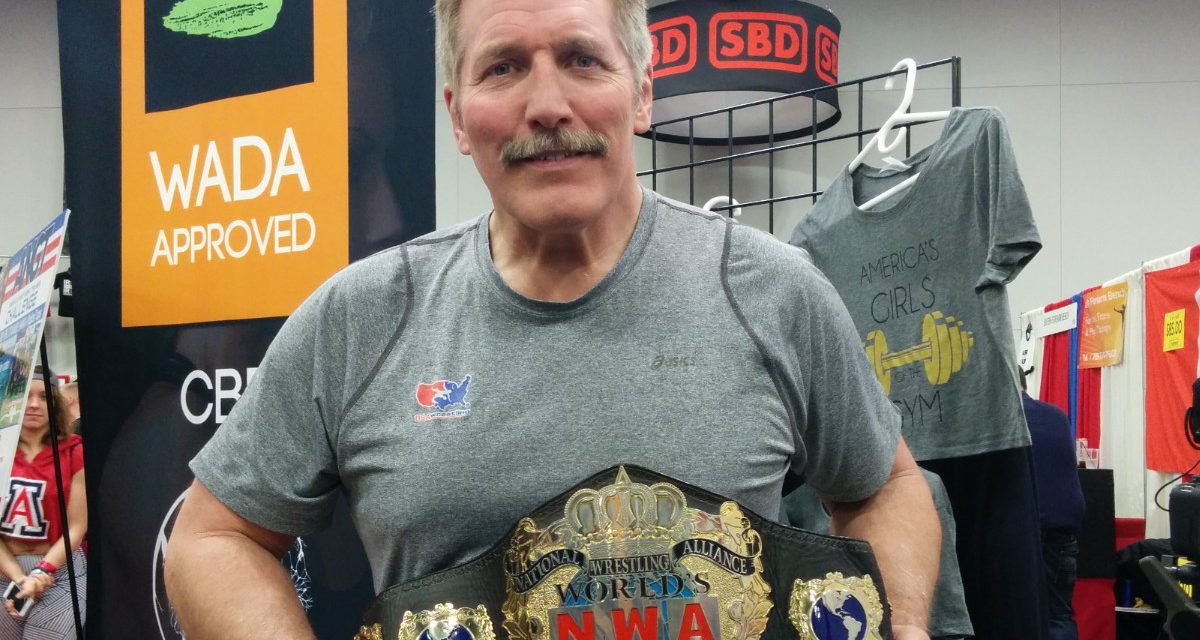 CHERRY HILL, NJ — On one hand, Dan ‘The Beast’ Severn is completely out of place in the autograph room at the NWA 50th Anniversary conventions.

To his left is the always-hungry Abdullah the Butcher. To his right are the violence-loving, former ECW stars Sandman and the Pitbulls.

But there’s more than just a contrast of styles. 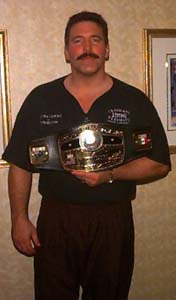 Dan ‘The Beast’ Severn poses with his old NWA World title at the NWA 50th Anniversary. During the Cauliflower Alley Club Banquet, he was presented with a new title. — Photo by Greg Oliver

Severn is the only one in the room to fill his table. There’s merchandise to buy, business cards for his web site, books, photos.

And belts — three massive championship belts that are bigger than some of the children who cautiously approach for autographs. Two are shoot fighting titles, and the other is the NWA World title.

Well, maybe there is someone in the room that he has a kinship with. How about eight-time NWA World champ Harley Race.

Easily one of the most intelligent wrestlers this reporter has ever interviewed, Severn continued on about the state of wrestling today.

“[In the] WWF you have some high flying, but most of that is from the Japanese. You only have one or two Americans that are doing something like that. I think that people want to see a little more substance. You can mix it, but there’s not too many guys out there that I see on the professional level, between WCW and the WWF, that actually have wrestling ability. You’ve got a finger-flipping champion, you got a D-generation crotch-happy group out there. I don’t want to be a part of those guys.”

At 40 years of age, Severn has an unbelievable schedule. He relies on his internet site to be able to tell where he’s going next and couldn’t remember the name of the city he was in the night before. (Fans in southern Ontario should note he’ll be in Barrie Nov. 6 and Toronto Nov. 29.)

In the immediate future, he’ll be defending the NWA World title, and committing more time to the WWF.

“I know what my window of opportunity is,” he said. “Point blank, I was the oldest person that the WWF has ever, I think, ever hired in the first place … You find another 40-year-old that currently works for 12 different fight companies, and 27 different professional wrestling companies. I have an incredible schedule that I do. On top of running a 10,000-square-foot training facility with weekly classes, I have a wrestling products company, I’m a financial investor, you name it — I do it all.”

How does he find the time to do all that, plus personally answer much of his email?

“That’s exactly what Vince [McMahon] asked me! I said, ‘Well, it’s easy. I get 25 out of 24 and eight out of seven. I don’t sleep a whole lot. If you saw, if you knew how little I trained too, for all these crazy events, that would even boggle your mind more. In all my no holds barred matches, I’ve done two training camps since ’94. Now think about that.”

Severn seemed to like to tell stories about his schedule — sleeping in cars, changing for shows in the airplane bathroom, warming up in the airport.

Take the show the night before the NWA convention. The one Severn can’t remember where it took place. 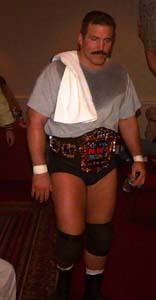 Dan ‘The Beast’ Severn on the way to the ring for his match against Steven Regal at the NWA 50th Anniversary show. Severn won the scientific encounter in just over 30 minutes. — Photo by Greg Oliver

“I hadn’t even made it into the hotel. ‘Dan, can you bail us out tonight?’ What time? No problem. And I took my bags and walked right into the NWA board meeting. I hadn’t even changed yet. I went to bed at 2:30 the night before, because I was finishing up doing email. My alarm went off at 3:30.” Asking a simple question, will straight wrestling sell anymore?, brings up, you guessed it — more talk about his schedule.

“Well, to me professional wrestling is a three-ring circus with a side freak show — I think they’re called the Human Oddities. So, I have my place, whether how appealing or not it is, I do have my place in the there. The younger generation watch us now, they definitely know I do something different. I’m trying to put a blend out there. If I actually just concentrated — think about this — Hulk Hogan, Randy Savage, Lex Luger work for one company. They do just ONE thing. Austin, ‘Taker, Mankind work for one company, they do ONE thing. Just think if I actually just concentrated my efforts to ONE thing, how fast I would blow past these people and make them look awfully foolish out there.

“It’s probably a good thing that I do forty different things simultaneously. And I don’t do a half-bad job at all of them combined. Half the time I have to look at my schedule to see what I am doing today, who am I doing it with and are we in the professional wrestling world? Are we in the no-holds barred world, am I teaching kids? I hit the airport, I’m picked up and I’m working seminar with law enforcement. We’re working with weapons, guns, bullet-proof vests, things of that nature. I don’t think I know of any other professional wrestlers who could have participated in something like that. I have an interesting blend of what I do.”

But what does Severn consider himself first. A fighter or a wrestler?

“I’m a competitor. I’m a competitor that utilizes his amateur wrestling background. It’s a different mindset. A fighter, a lot of times has to create an animosity.”

The obvious reference is to long-time UFC rival Ken Shamrock, who in a previous interview with SLAM! Wrestling, said that he was a “a fighter.” That’s what I do, that’s who I am. That’s what I portray in the WWF. I’m no nonsense, and I take no crap.”

Severn is told of Shamrock’s comment: “I think by me taking on Severn, it’s a step backwards.”

‘The Beast’ smiled and started to laugh.

“Interesting,” he started. “Well, he may think it’s a step down, I don’t even think we’re on the same level or from the same world in the first place. I’ll put my background up against his background any day. Now, am I up to speed yet on the WWF? No, I’m not there yet. I’ve only wrestled maybe seven or eight times. How many matches has Ken wrestled for this company? It won’t take me near as long as it’s taken him.”

Like Shamrock did in his interview with SLAM! Wrestling, Severn also downplayed any personal rivalry, while taking a stab at the Intercontinental champ.

“A lot of people ask me, Do you hate Shamrock? No, I don’t hate him. I don’t know him. Maybe if he gave me a chance to know him, maybe I will then. Do I care for his attitude? No. One of us has accomplished it on his own ability. The other has not.”