Wrestlers bleed like stuck pigs by cutting their foreheads open with razor blades.

Wrestling rings are miked underneath to amplify the action.
If executed correctly, most bone-crushing moves hurt but don’t seriously injure. 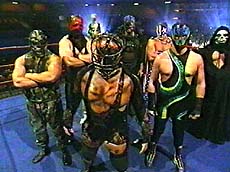 For the four or five wrestling fans out there who’ve been sleeping in Mr. Slate’s rock quarry, NBC in conjunction with Nash Entertainment aired Exposed! Pro Wrestling’s Greatest Secrets on Sunday night, disclosing some of the industry’s trade secrets on national television.

What the producers failed to understand is that these reputed “secrets” are common knowledge amongst wrestling fans. A fact that an unenlightened mainstream media still hasn’t picked up on. Things have changed remarkably since Gorgeous George or Whipper Billy Watson donned the tights. Which would explain why the backward-thinking producers of Pro Wrestling’s Greatest Secrets insulted the viewers they sought to educate.

Demeaning fans throughout the broadcast by suggesting that they “think it’s all real,” the prime time special depicted wrestling promoters and their talent as sneaky con men pulling the wool over the eyes of the gullible spectators. Eight masked wrestlers worked matches in the ring and spoke openly about the wrestling business in interview segments. Each were given new gimmicks (Brute Force! Brash Knuckles! Ben Hurt!) and had their voices electronically altered so as not to reveal their true identities.

In addition to explaining the obvious about how various moves are accomplished without sending grapplers to the emergency room, the NBC special also revealed that… 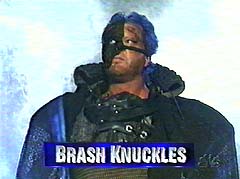 Brash Knuckles, one of the wrestlers who told all on last night’s Exposed! Pro Wrestling’s Greatest Secrets.

Thirty or 40 years ago when “marks” outnumbered “smart fans” such an expose would’ve shocked the naive public at large. Back then, promoters, bookers and wrestlers alike feared the end of their livelihood if their trade secrets were revealed and therefore remained tight-lipped. No news flashes there to any self-respecting squared circle aficionado. Though researched extensively enough to use the jargon correctly, the special devoted very little time to the real dangers wrestlers face except for a brief mention during the quick wrap-up.

Not so in this the “information age.” Nowadays, the majority of grappling fans are fully aware of what REALLY goes on in the ring and likewise in the backstage area. They know the outcomes are planned beforehand. They know the wrestlers are working together to put on an exciting show. They know that the salt thrown in Mr. X’s eyes is really baby powder anyone can purchase at a neighborhood drug store.

Wrestling fans just don’t care. They “suspend their disbelief” like filmgoers do before taking their seats in a movie theatre. Ignoring reality for a short time enhances the experience and the audience’s overall enjoyment of the presentation. They are willing participants playing their role as extras in a larger-than-life production in which they have some say in the events that are unfolding.

In “exposing” pro-wrestling’s “secrets” what the producers really did was broadcast their ignorance for all to see and hear.