An interview with Hunter Hearst-Helmsley

Q: What has Chyna brought to your matches?
A: Chyna’s brought a confidence to my matches because I don’t have to worry about anybody coming in from behind or jumping me from behind or when I’m down, people attacking me or coming at me with a chair. She’s there to basically watch my back and that has added a confidence to my match because when I don’t have to worry about that I can focus on winning and on business at hand. And that’s what I do. 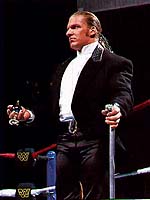 Q: Why do you need her?
A: I just think in the World Wrestling Federation right now, if you’re watching the show, gang warfare seems to be something that is very prevalent in professional wrestling right now, in every organization. In the WWF especially, you have the NOD, Bret Hart and the Hart Foundation. You have all these different groups of people, there even seems to be forming some sort of alliance between Shawn Michaels and Steve Austin. You know, you have all these alliances with people going on and when you have more than one person to worry about in the ring you need to have somebody to watch your back so you can focus on the business at hand. That’s what she’s there for.

Q: Do you see yourself getting involved in any of these alliances?
A: If it comes to that, then that’s what I will do. I’ve always been kind of an independent person and enjoy having success on my own, with just Chynna. If it comes to that, then I will find the people I need to be successful in this business, but until that time, I will continue to do what I do best and that’s just go in the ring and win.

Q: Some people would say that you were part of a gang that apparently running the WWF. The Clique. How has that changed in the last little while since everyone’s left and come and gone?
A: As far as the behind the scenes goes, and the Clique goes, there’s still a Clique, but now we run two companies. We just divided and conquered. Half of us went south and half of us stayed in New York. As far as inside the ring goes, when we’re inside the ring we’re all business. If Shawn Michaels regains the WWF title then he’s what I want. The WWF title is what I want and that’s what I’ll go after. … As far as us having the power and running the wrestling business, anytime you have a group of wrestlers who are on top of the business they’re going to be listened to, especially if their thoughts and their viewpoints are good they’re going to be listened to. And that’s what happened. It wasn’t like we forcefully took over the business, it was that we were better than everyone else.

Q: Do you ever see yourself heading back down south to WCW?
A: Well you never say never, but the World Wrestling Federation right now is my home. Vince McMahon has treated me very well. If I wanted to go to WCW, I had the opportunity a year ago when Kevin and Scott and The Kid left. But I didn’t. I chose to stay where I was because I still feel in my heart that the World Wrestling Federation is the better organization, more oriented towards wrestling and giving the a better product. I think there’s a war between WCW and the WWF and I think the WWF will run in the long run, because all WCW knows how to do is take what the WWF has made and try to use it to their advantage. They don’t know how to create, they only know how to take. Most of the people that did go there, for example Hogan and Savage, they were at the end of their ropes here. I don’t really think they could compete in the WWF anymore. As far as Kevin and Scott go, you know, WCW works a lot less than we do and quality of life what a big concern to them. They wanted to be home more. Kevin Nash just had a baby and he’d like to be home with his baby and his wife. That’s a big factor to those guys and when the offer was made they took the opportunity to work less, go down there and try something new. And that’s what they did. I can never say never because you can never know what’s going to happen in this business but at the same I’m perfectly happen where I am. My goals are the same as they were two years ago when I walked in the door here and that’s to be the WWF champion.

Q: You’ve been feuding with Goldust. Just this past week he’s ‘come out of the closet’ as Dustin Rhodes or Dustin Runnels. How do you feel about that?
A: As far as I’m concerned, Goldust coming out of the closet, if that’s what people want to say, he’s not saying that he’s a homosexual. He’s saying that he portrayed a homosexual to try to make a name for himself. He preyed on people’s worst fears. Now he’s decided that all that time he had people hating him that he didn’t really like it now he’s going to bear his soul and hopefully people will like him … I think that’s a waste of time and he’s a hypocrite. I think that he’s doing whatever he can to play off the fans, whether it’s their fears or their sympathies. That’s what he’s trying to do. Now is an opportune time, with TV shows like Ellen where coming out is a big thing. His character being of that nature, it’s the perfect time to do it. I think he’s just trying to capitalize off the point that society’s at. If it works for him great. I had no problem with Goldust the character. I had a problem with Dustin Runnels. I think that we’ve settled that in the ring. I’ve shown the world on more than one occasion that I’m a better wrestler than he is.

Q: This weekend you’re facing Flash Funk on In Your House PPV. Is this a step down for you?
A: It’s step back towards where I want to go. I was involved in something with Goldust that did nothing for me. When I lost the Intercontinental title, I never really faced Rocky Maivia to try and get it back in any serious fashion. He did me a favor. He took a burden off of me, because all the Intercontinental title was doing to me was holding me back from my real goal which was the WWF championship. I wasn’t going to get a fair shot at that while I had the Intercontinental belt. But in the meantime, I got caught up in a feud with Dustin Runnels or Goldust or whatever he wants to call himself today. Now is the time for me to start proving myself again. Any time you start back after a goal you start back at the bottom. Flash Funk is my first step. Flash Funk, when everyone sees me Pedigree him in the middle of the ring, easily they’re going to give the next step. I’m going to take that step until I get to whoever is the champion, whether it’s the Undertaker, whether it’s Steve Austin, whether it’s Bret Hart, whether it’s Shawn Michaels. It doesn’t matter to me who it is because I feel in my heart that in that ring I have no equal. I’m better than all those wrestlers.

Q: Do you feel you match up better against some of them?
A: I would much more enjoy a match with wrestlers the style of Shawn Michaels or Steve Austin. The Undertaker’s champion, that’s where I need to go and that’s who I will face. Although the Undertaker’s a lot different in style and a lot more difficult to wrestle, when I say I have no equal in the ring, I mean everybody. So I feel I can be WWF champion.

Q: You have a very French [real] name [Jean-Paul Lesveque]. Did you grow up in a French family?
A: Yeah.

Q: How did you get involved in pro wrestling?
A: Basically I was a big fan growing up, and it was something that I always wanted to do. I had the ability to do what I wanted to do in life, and that’s what I did. When other kids were watching football, baseball and basketball I was watching professional wrestling. My heroes growing up were different than everyone else’s that weren’t wrestling fans. Ric Flairs, and people like that. It’s just what I wanted to do, and when the time came that I was able to, I did. I enlisted the help of Killer Kowalski, who trained me, and went from there.

…. brief talk about the Canadian Pro Wrestling Hall of Fame. …

Q: What kind of things will you be talking about at the Boys and Girls Club tonight?
A: Won’t know until I get there. I’m just going to wing it. If they’re brats, I’m going to tell them to quit school and talk back to their mothers.

Q: Is this something you do a lot?
A: Whenever the WWF needs me to do it. I work for the World Wrestling Federation and if we need to come in and spread our name around, or get promotion for our towns, then that’s what we do. I enjoy doing this kind of thing, going in and talking to kids. When I’m wrestling, I’m a ‘bad guy’ so-to-speak. That’s all part of our game that we do. I enjoy going in and talking to kids. If they want to do something with their lives, all they have to do is do it.

Q: Thanks for your time.
A: Thank you.