A surprise in every pack of 2022 Panini Chronicles WWE 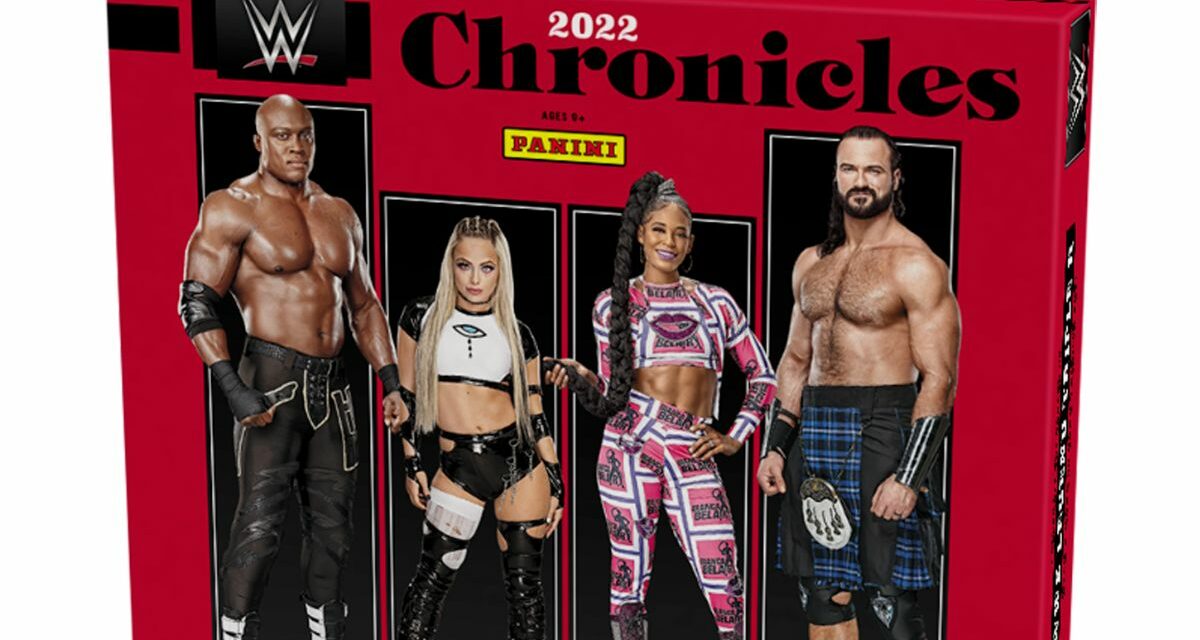 Just in time for the new year, Panini ended 2022, and its first year of WWE licensed trading cards, with one final product, 2022 Panini Chronicles WWE. Like other Panini WWE trading cards released this year, such as Prizm and Select, Chronicles is a trading card set that’s been available for a number of years in other sports, like baseball, basketball, football, and most recently UFC. So many collectors are already familiar with the general theme of Chronicles, but if this is your first time opening Panini Chronicles, it’s good to know ahead of time the kind of ride to expect.

The fun of Panini Chronicles is the wide variety of sets and styles available in every pack. Unlike, say, Panini Prizm, where there’s one base set, and the possibility of pulling randomly inserted parallels and inserts, 2022 Panini Chronicles WWE includes cards “from more than 20 brands,” so while Chronicles does include a 100-card Chronicles base set, it also includes cards from other Panini brands which haven’t already received its own individual WWE release, such as Contenders, Prestige, Phoenix, Score, and the brand I was most excited about, Donruss Rated Rookies/Donruss Optic.

There’s a lot to keep track of, even if you’re familiar with the brands included, but if you’re in need of a cheat sheet, thankfully each card states which brand it is from on the back of the card. 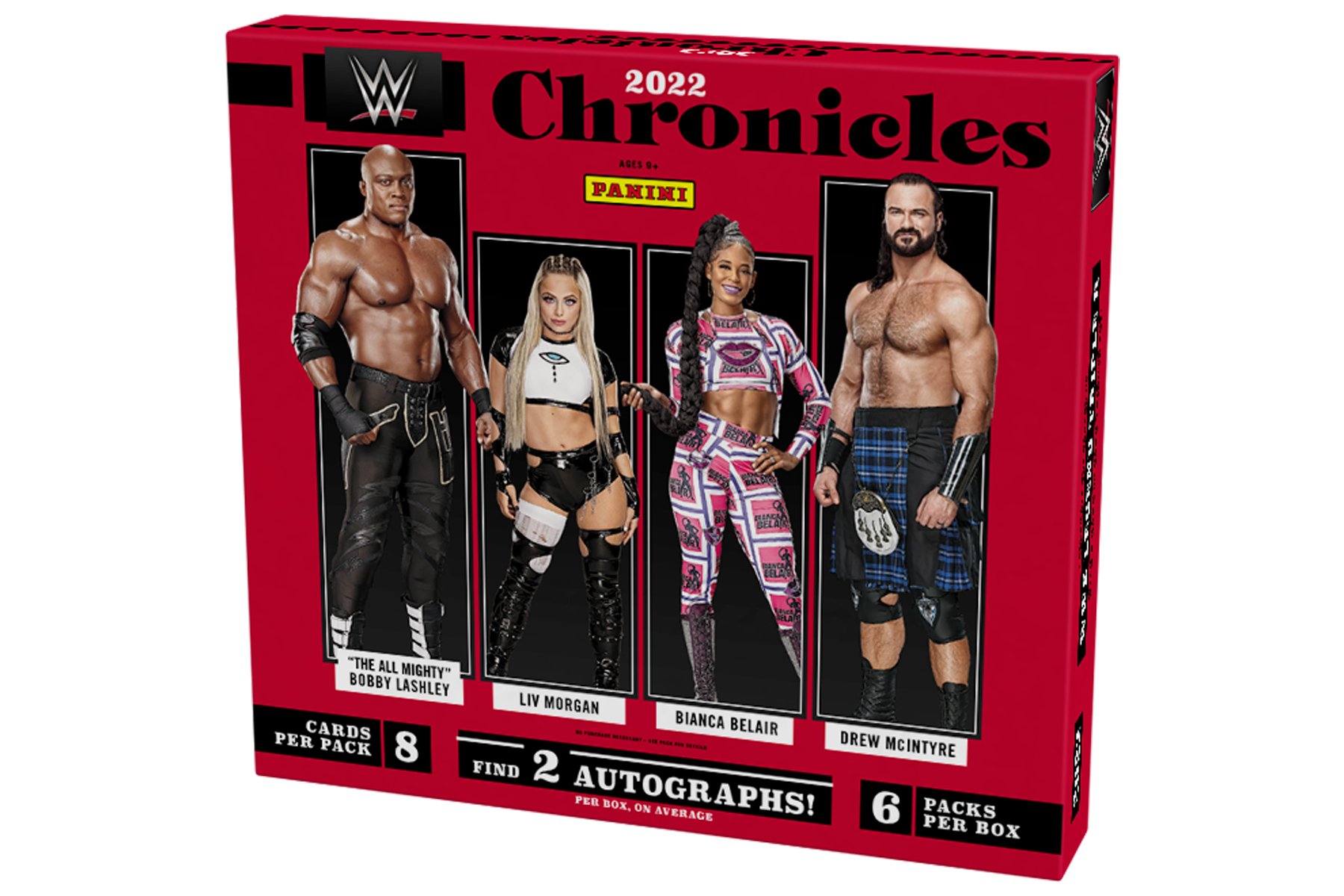 In my first pack of my first hobby box of 2022 Panini Chronicles WWE, I pulled a Roderick Strong Payoff, Valentina Feroz Luminance rookie, Alexa Bliss Spectra, and my first hit of the box, an Edge Prizm National Pride autograph. Even though Panini Prizm already received its own WWE release, National Pride wasn’t part of that set, so these are new to Chronicles. After that, I pulled an Umaga Chronicles, a Von Wagner National Treasures rookie numbered out of 99, Liv Morgan Illusions, and a Theory Illusions out of 199. This was a pretty big first pack, with two numbered cards and an autograph. It also made me think, these packs have so much variety in them, they might give me whiplash! 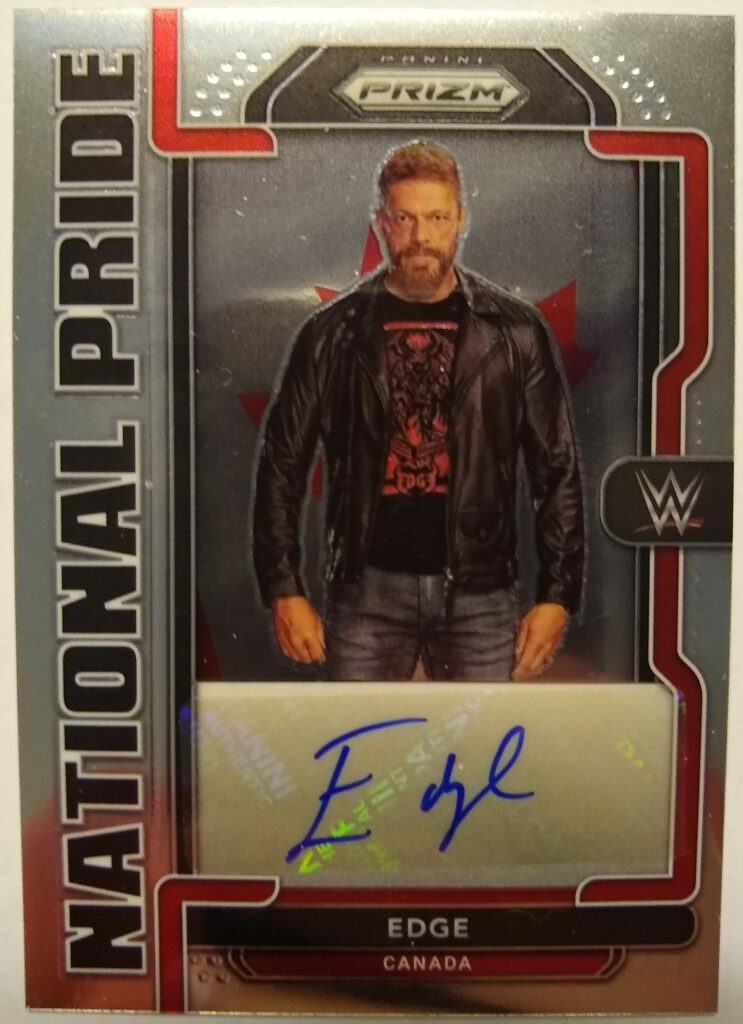 My second pack included a “Macho Man” Randy Savage Legacy card, Montez Ford Chronicles out of 199, and my first WWE Donruss Optic card, “The American Nightmare” Cody Rhodes. For collectors of a certain age who grew up during the so-called junk wax era, such as myself, the Donruss brand holds a lot of sentimental value, and Optic is Donruss’ chrome brand, so I’m excited that I’m finally able to collect Donruss Optic cards of professional wrestlers. After Rhodes, I pulled a Ru Feng Flux rookie, which was maybe the wildest looking card I’ve pulled so far, then a Rick Steiner Chronicles, Edge Contenders Season Ticket out of 99, Andre Chase Black rookie, and a Sheamus Elite. 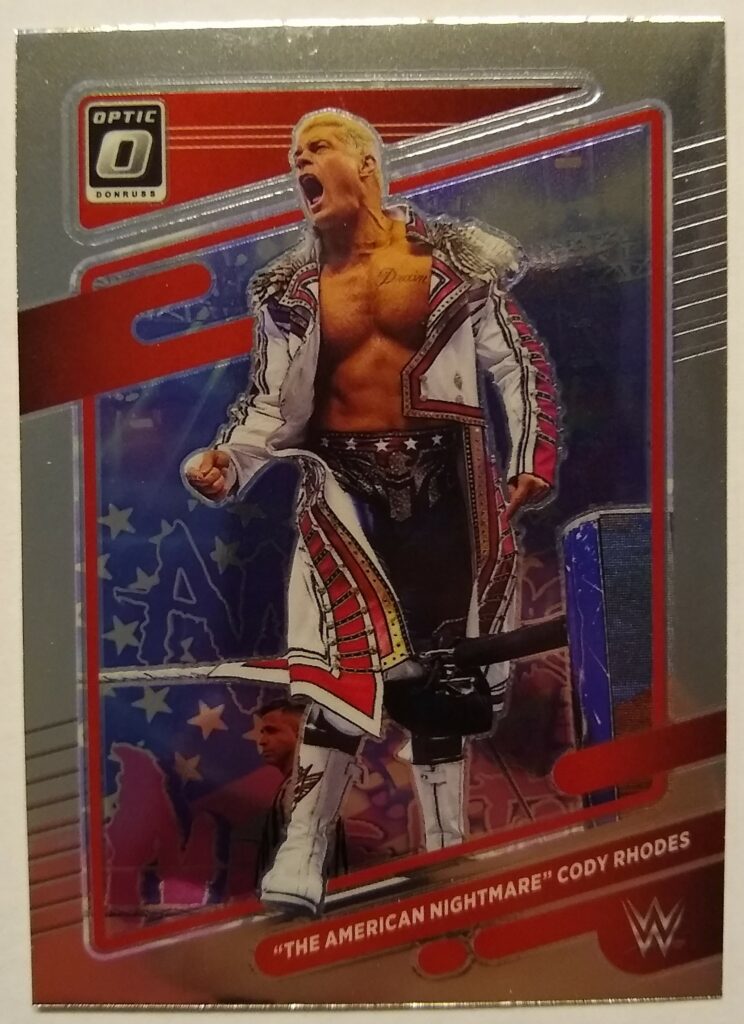 In pack three, I pulled a Damian Priest Origins, Sola Sikoa Absolute rookie, Aliyah Phoenix, and a Dude Love Flux out of 199. This was my second Flux card two packs in a row and they’re really catching my eye. Next I pulled an X-Pac Chronicles, another Macho Man, this time Chronicles, which made me happy to see him so well represented, then an Aleah James XR rookie, and a Drew McIntyre Certified, so three packs in, halfway through the box, I’m still pulling cards from sets I haven’t seen before. 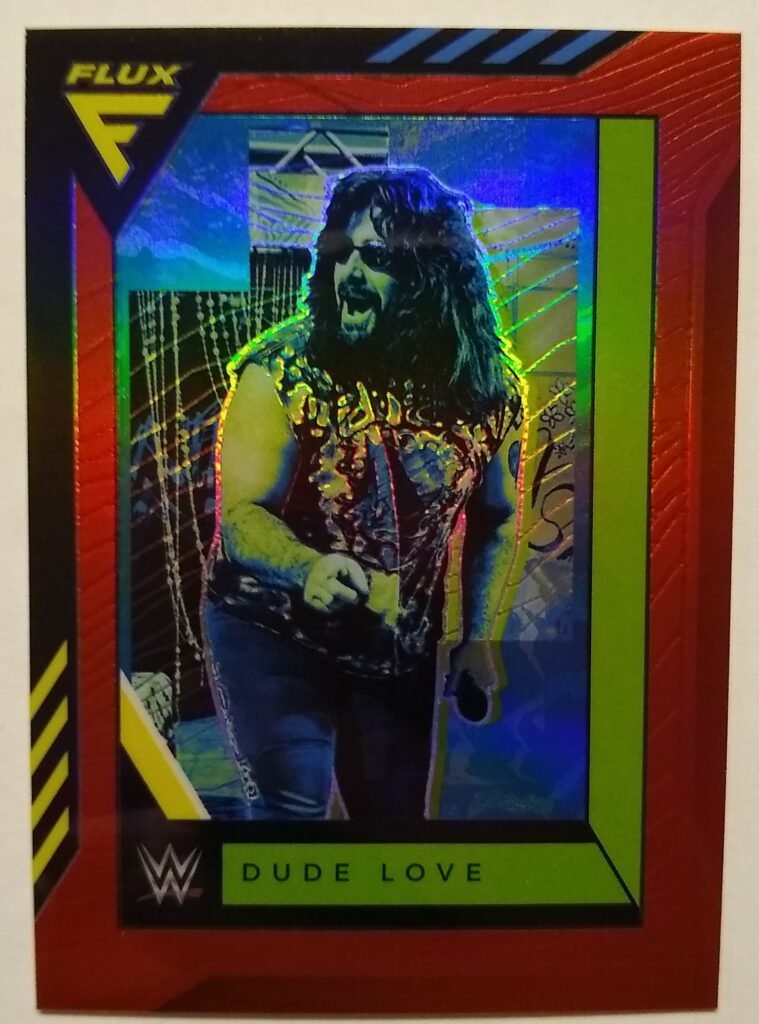 In my fourth pack, I pulled a Nikkita Lyons Donruss Rated Rookie, which just warmed my heart, because when it was first announced that Panini had acquired the WWE license, the possibility of Donruss Rated Rookies were maybe what I most looked forward to with Panini WWE trading cards. Next I pulled a Charlotte Flair Contenders, Randy Orton Spectra, Omos Donruss Optic, a big old cardboard spacer that I was hoping was a hit, Mandy Rose Chronicles, Ezekiel Chronicles, Mandy Rose Illusions, and an Aoife Valkyrie (who’s now in NXT as Lyra Valkyria, which sounds an awful lot like Taya Valkyrie) Certified out of 99. 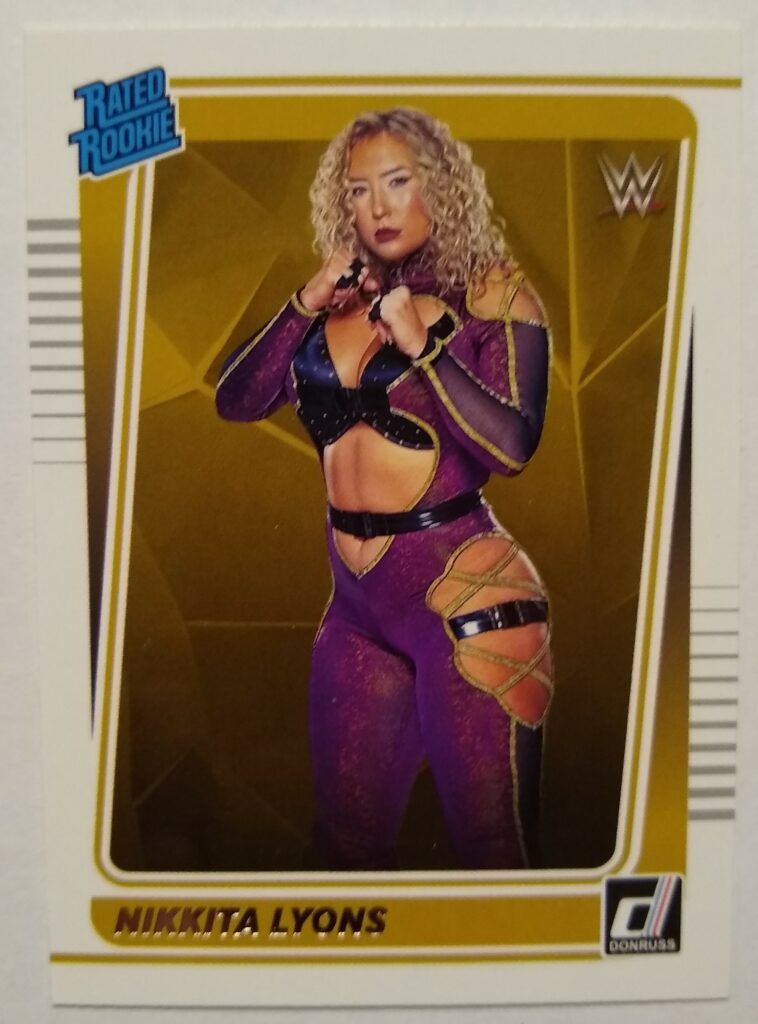 My fifth pack of 2022 Panini Chronicles WWE began with an Odyssey Jones Score card, which is another brand/set I have some junk wax fondness for, a Chronicles rookie card numbered out of 99 of new NXT Women’s Champion Roxanne Perez, a Duke Hudson Flux rookie, and a Johnny Rodz Chronicles autograph. The Chronicles autographs are on a thicker stock of cardboard than the Chronicles base cards, which is a nice touch, and while Rodz isn’t someone I’m familiar with, as a wrestler, I really appreciate that he’s being given some added respect in this set as a “tough-as-nails competitor” and trainer of legends, such as Tommy Dreamer and the Dudley Boyz. To finish the pack, I pulled a Shelton Benjamin Chronicles, Brooks Jensen Luminance out of 199, which reminds me of a Topps Stadium Club card, Nikki Bella Black, and JBL Elite. 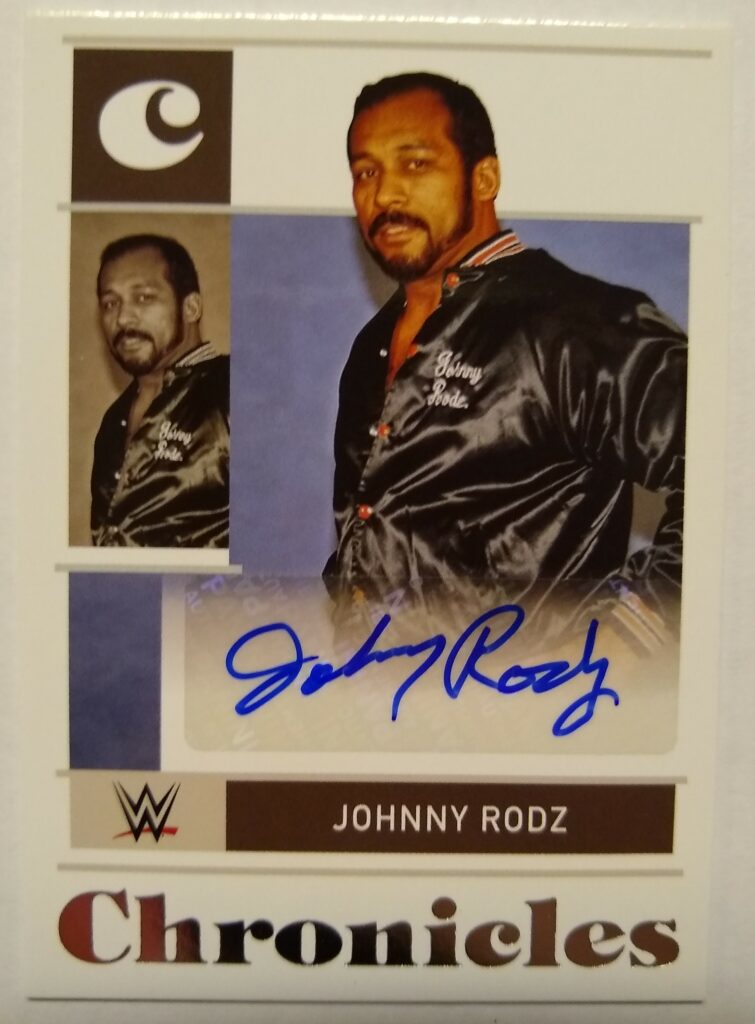 In my sixth and final pack of my first box, I pulled an Axiom Origins rookie, which is a very cool and colorful set, Gigi Dolan Absolute, Brock Lesnar Donruss Optic, Trick Williams Spectra, Ken Shamrock Chronicles, which is just great to see Shamrock in a modern WWE product, Gigi Dolan Chronicles, Rhea Ripley XR, and a Charlotte Flair Certified. So, the obvious hit in my first box is the Edge National Pride Prizm autograph (no disrespect to Johnny Rodz) but I think my favorite sets, so far, are Donruss Optic and Rated Rookies, and my surprise favorite is Flux.

My first box of 2022 Panini Chronicles WWE was fun to open, so I was really looking forward to opening my second box, and it didn’t let me down. To get started, in my first pack, I pulled a Jinder Mahal Chronicles, Don Muraco Chronicles, Brie Bella Donruss Optic, Stevie Turner Flux, Cody Rhodes Contenders, Queen Zelina Score, Tiffany Stratton Certified, and Brock Lesnar Certified out of 99. Funny little detail, both of my Lesnar cards show him in the ring with Roman Reigns.

In my second pack, I pulled a Gigi Dolan Chronicles, a duplicate for me, which was unexpected, considering the size and scope of this set, but not unreasonable, then a Big Boss Man Chronicles, a Superstar Billy Graham Donruss Optic, which was sort of a funny juxtaposition of an old school wrestler on a shiny, ultra modern card, then I pulled my first hit of my second box, a redemption card for a Phoenix autograph of “The American Nightmare” Cody Rhodes! This was an exciting pull for a number of reasons, one of which being this was the first redemption card I’ve ever pulled, and also because even though he’s still out of action with an injury, Cody Rhodes cards remain as hot as they’ve ever been. Sure, there’s some horror stories out there about how long it has taken people to eventually receive their redemption cards, but at the moment, I was just psyched to pull one. After that, I finished the pack  with an Andre the Giant Legacy, Jake (no “The Snake”) Roberts Origins, Ciampa XR, and an Aoife Valkyrie Certified out of 199, my second numbered Certified parallel of hers. 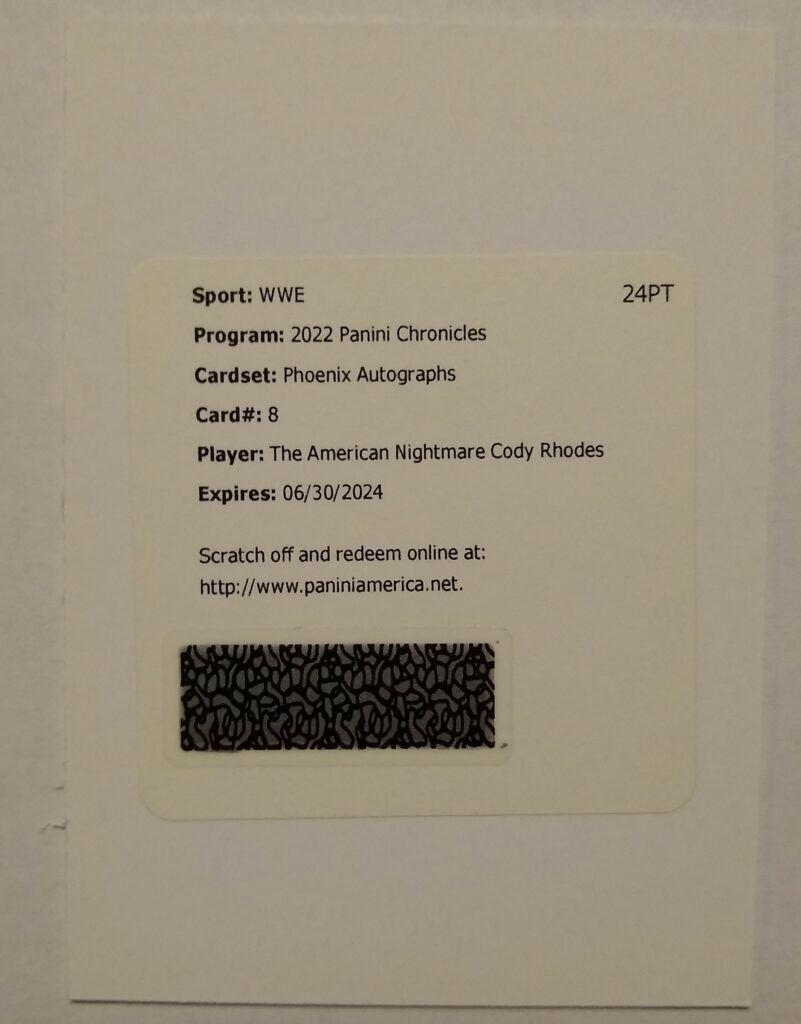 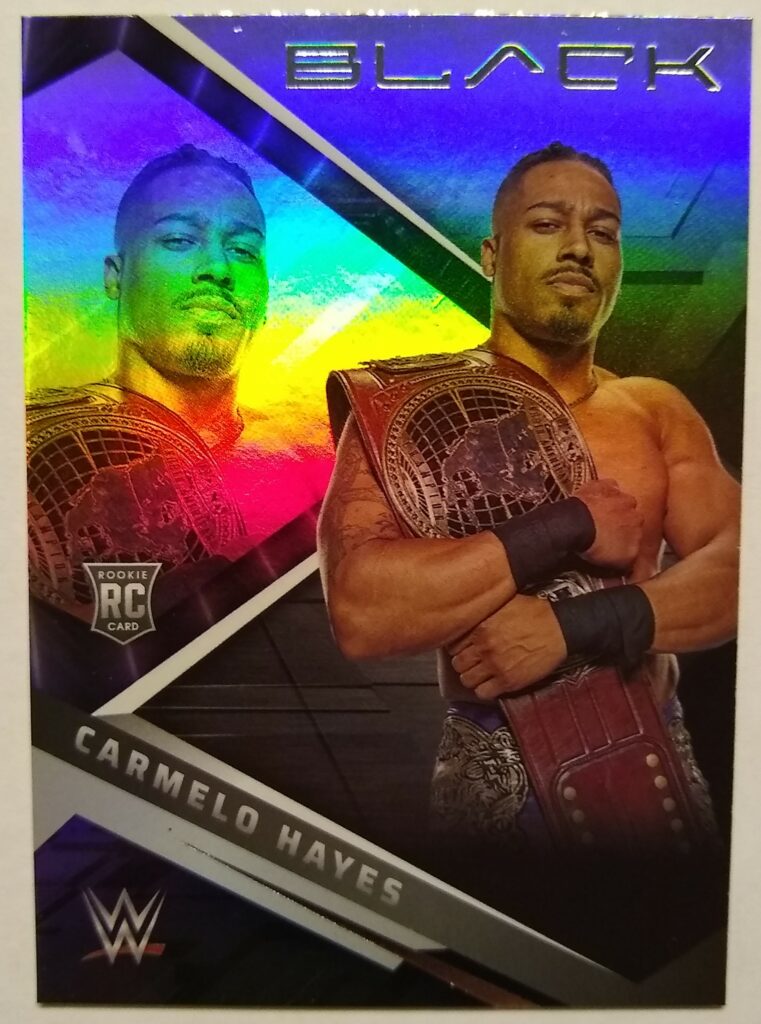 Next, in pack number four, I pulled a Sola Sikoa Chronicles rookie, the recently released from NXT Bodhi Hayward Spectra rookie, an awesome Finn Balor Donruss Optic red parallel out of 199, Roman Reigns Absolute, a great Roxanne Perez Donruss Rated Rookie, a Cactus Jack Elite, which like the Superstar Billy Graham Optic is another awkward combo of a legend on a modern card, and finally a Ronda Rousey XR. 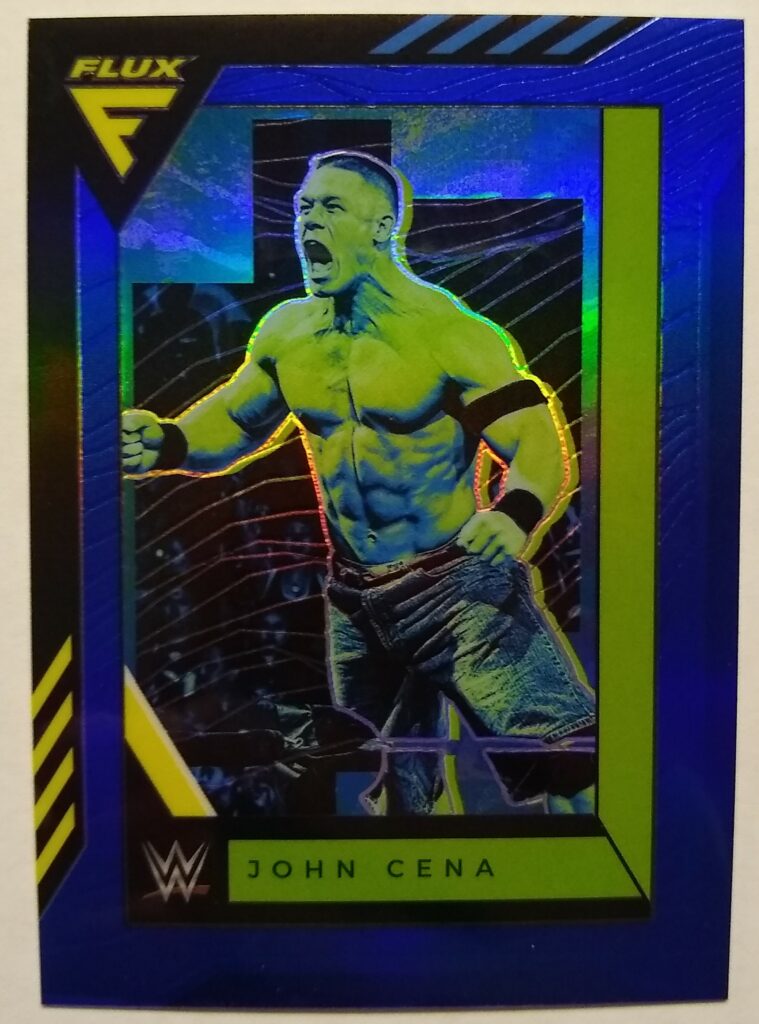 So, I was down to the final pack of my two boxes, and still had one hit left to pull. To start, I pulled an Akira Tozawa Chronicles, Tamina Chronicles out of 99, Alundra Blayze Phoenix, and then my second hit of the box, a Joaquin Wilde Chronicles autograph numbered out of ten, making this a gold Chronicles signature! While Wilde might not currently have the name recognition as other talents in NXT or WWE, I was a fan of him as DJZ, and remain a fan of his as Joaquin Wilde as part of Legado Del Fantasma, and once had the pleasure of watching him wrestle live for EVOLVE at a Knights of Columbus Hall in Livonia, Michigan, against Mustafa Ali, while they were both still in their light-up gear, so it was a real joy to pull this card. Back to the pack, I finished with a Bruno Sammartino Prestige, Shanky Rookies and Stars, Jake Roberts Origins out of 49 (very cool!), a John Cena Illusions, and finally a Xia Li Black. 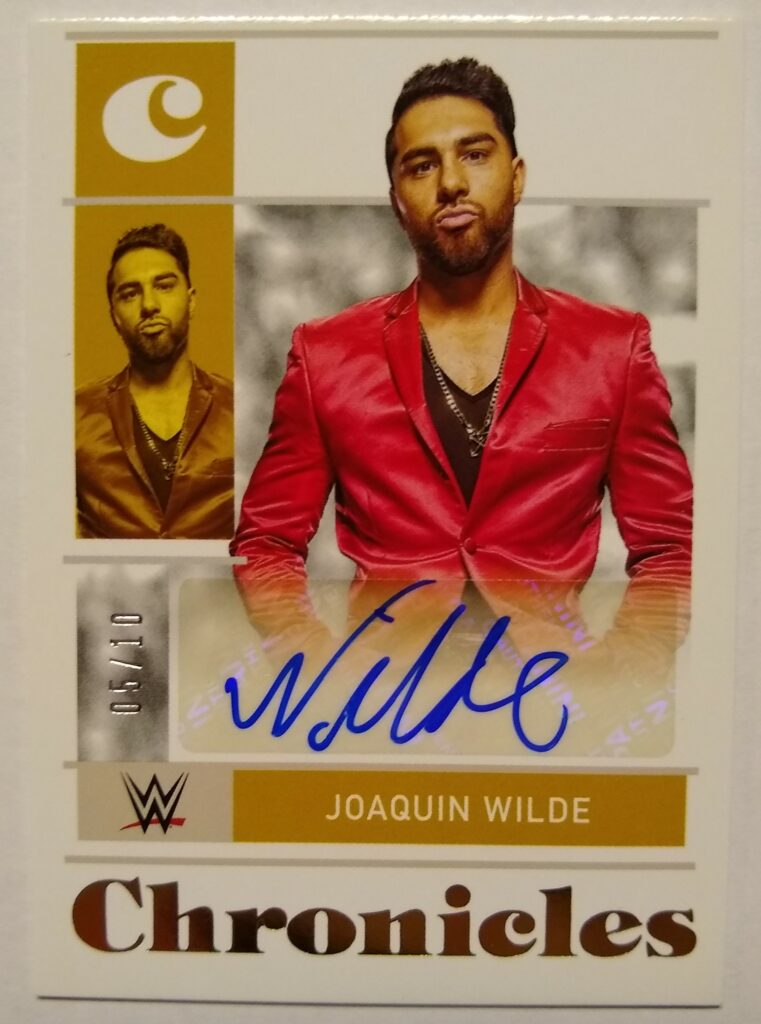 Box number two, with the Rhodes redemption and Wilde gold auto, had the biggest hits of my two hobby boxes, but both boxes were a blast to open, and I predict they’re going to be fun to organize and sort, with all the different brands and parallels. Between my two boxes of 16 packs, I pulled 96 cards (48 from each box), with just three dupes, including two autographs and 18 numbered parallel cards from 22 different brands. I do hope that some of these sets eventually receive a solo release, like Donruss/Donruss Optic, Flux, or the premium National Treasures brand (of which I pulled one card, a Von Wagner rookie), but this was a great way for Panini to get a lot of WWE talent on a wide variety of cards and designs. 2022 Panini Chronicles WWE way be a challenge for set or player collectors, because of how big the checklist is, and how many different parallels there are, but at the same time, I suspect these may be more collectible with wrestling fans than they tend to be with other “stick and ball” sports, because of that very reason. In conclusion, 2022 Panini Chronicles WWE is a moderately-priced ($150-ish and up), dynamic set, with each hobby box including eight packs of cards, two autographs, and multiple numbered parallels, and it isn’t a stretch to say you’ll find a surprise in every pack.