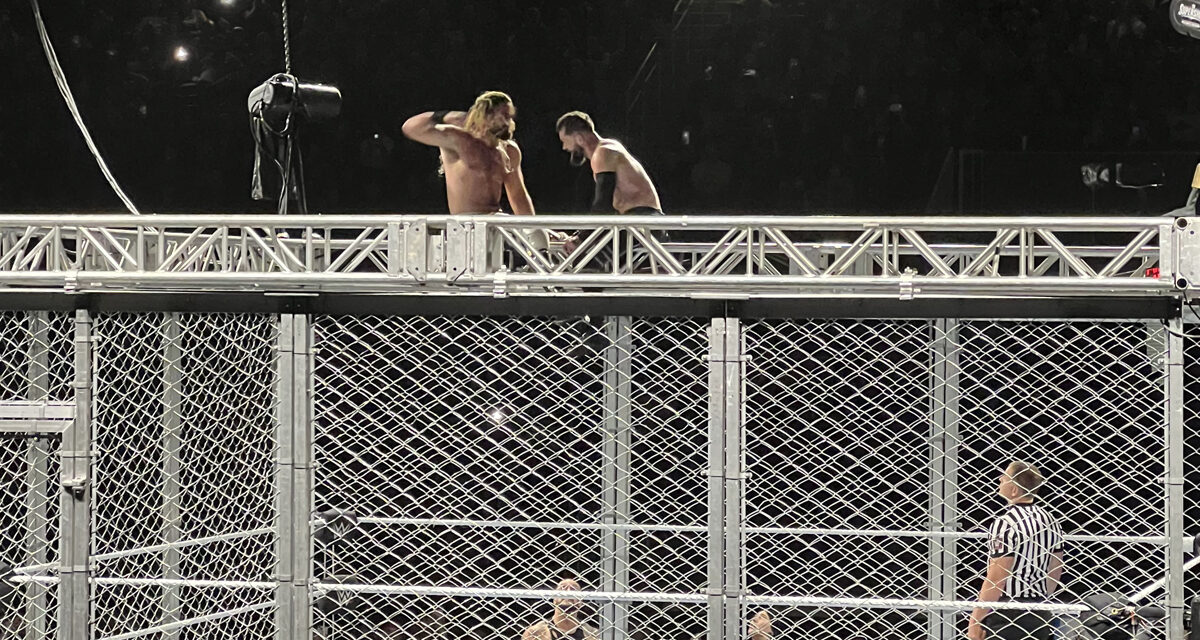 2023 may have been more than a day away but real-life husband and wife Seth Rollins and Becky Lynch had lots to celebrate at the WWE Live Holiday Tour at Toronto’s Coca-Cola Coliseum.

Lynch came to Rollins’ rescue during his steel cage match against the Judgment Day’s Finn Balor in the main event.

There were a few other changes to the card too with Becky Lynch taking on Bianca Belair for the Raw Women’s Championship. The match was originally a triple threat match between Lynch, Belair and Bayley.

“You’re not Bobby!” shouted the naughty but mostly nice crowd in attendance at Finn Balor as members of The Judgment Day made their way to the ring. Balor seemed to take no notice of the chants as Rhea Ripley and Damian Priest prowled around outside of the cage while he stepped inside. 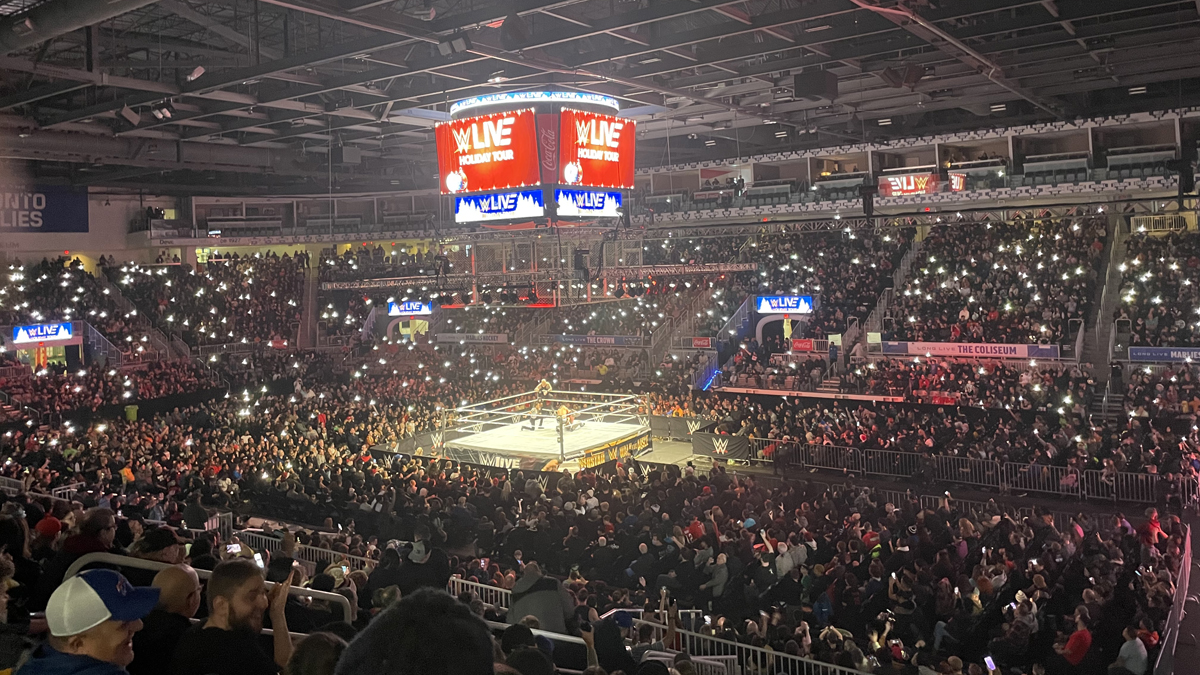 The crowd serenaded Rollins as he entered the cage. Rollins egged them as their conductor waving his hands back and forth. A tentative Rollins and Balor traded arm wringers and arm bars feeling each other out. Balor maneuvered Rollins around the ring laying in chops in this corner and that.

Balor mocked the crowd and Rollins by doing some conducting of his own. The crowd booed in response. Rhea and Damian clapped and cheered as you knew they would. Rollins turned things around chopping Balor from corner to corner. Rollins attempted to ram Balor into the cage. Balor blocked the move then attempted the same thing. Rollins blocked him.

This is WWE 2022 so you know despite it being a steel cage match and the fenced cage at that, there probably wouldn’t be any blood and there wasn’t. Balor pitched Rollins a second time into the steel and bashed him in the back of the head with forearm smashes rocking him.

Balor raked Rollins face and forehead against the cage again and again. Still no blood. A merry Rhea and Damian laughed at Rollins’ expense.

The fans tried to will Rollins back to life with a “Let’s go Rollins!” chant.

Balor climbed up the side of the cage. Rollins yanked him back down. Balor hurled Rollins into the cage again with such force the chain links swayed and rattled in response.

Rollins took back control of the match bouncing Balor off one side of the cage after another. Rollins bashed Balor’s head 10 times off the cage as the crowd counted along. Still no blood. Rollins scored a two count with a backbreaker. 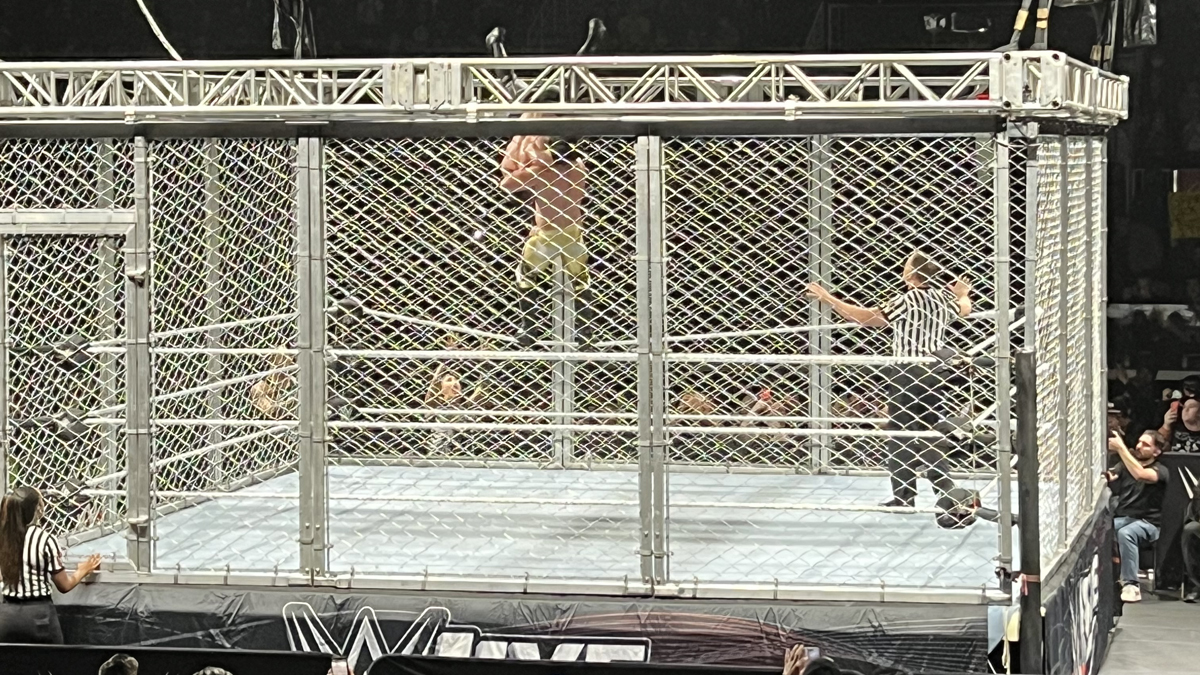 Balor gets suplexed back in the hard way. Courtesy: Joseph Casciaro, Slam Wrestling.

Rollins climbed to the top of the cage. Balor met him on the top rope. Both men battled for control. Balor rammed Rollins head off the cage. Rollins fell down to the mat.

Later, both men sat on the top of the cage clobbering each other. Balor raked Rollins’ eyes shoving back down to the mat below. Balor was almost half-way down the cage before Rollins grabbed him by the hair hoisting him back up. Standing on the second rope, Rollins suplexed Balor from the top of the cage back into the ring.

At sixteen minutes into the match Damian and Rollins got into a tug of war over Balor. Damian was trying to pull Balor out the door while Rollins was trying to pull him back into the cage. Rollins won out. Rollins punched Damian in the head. Damian stormed into the ring laying a beating on Rollins. Damian helped a groggy Balor get back to his feet. Rollins prevented a double-team by punching both men in the “lower abdomen”. Rollins made a break for the door. Rhea Ripley slammed it on his head. Rollins kicked out of Balor’s pin though.

This brought Rhea Ripley into the ring. As the only one standing she berated the official and then started stomping and punching a downed Rollins. 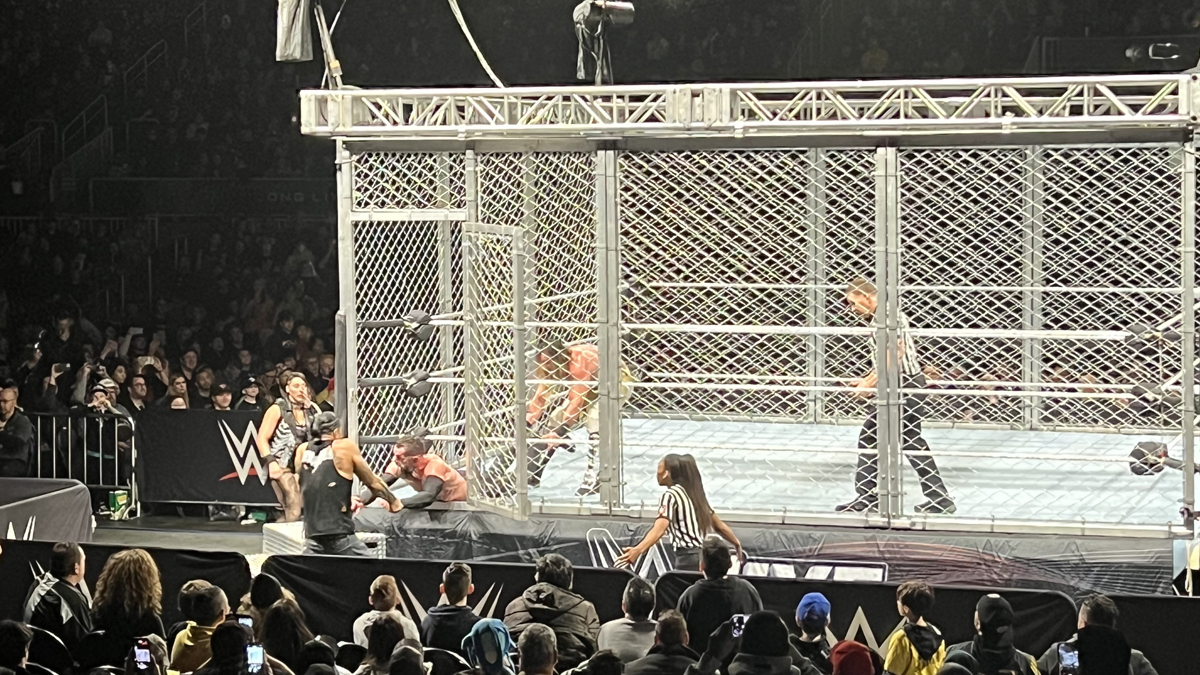 It is a tug of war over Balor. Courtesy: Joseph Casciaro, Slam Wrestling.

Becky Lynch’s music hit. She came running down the aisle with a kendo stick in hand. She walloped Rhea with the stick and gave her a Manhandle Slam. Rollins Curb Stomped Damian and then Balor for the one, two, three.

With the ring cleared of the Judgement Day, Rollins addressed the crowd to close out the evening.

“From our family to all of your families, Happy Holidays and Happy New Year!” he bellowed.

Rollins then danced with and dipped Becky before kissing her. They both climbed to the top of the cage to bask in more of the crowd’s adulation.

The WWE returns to Toronto and the Coca-Cola Coliseum on March 4th with the Road to WrestleMania tour. Tickets are now on sale with the code #WWEPre.

A great match for just a house show outing. The crowd was solidly behind Lynch though. Bayley ruins things by interfering and attacking both Belair and Lynch. Bayley says the fans in attendance are as dumb as hometown girl Trish Stratus. Lynch and Belair dispose of Bayley and bump fists.

The Alpha Academy versus The Street Profits

Chad Gable runs down Canada and Canadians. “My New Year’s resolution is to be more American as nothing good has come from Canada,” he says.

Montez stuns the crowd by picking up and slamming Otis. Dawkins dives onto to Otis who is on the floor. Montez hits his splash on Gable for the pin.

MVP accompanies Omos to the ring. MVP isn’t sure who Ali pissed off to be picked to wrestle Omos but MVP is willing to make Ali a deal since he thinks he has a very bright future. He opens the ropes for Ali to leave and forfeit the match.

“Don’t listen to them,” MVP says about the crowd. “They want to see you hurt as Canadians are gluttons for punishment.”

Ali declines the offer. MVP interferes often whacking Ali with his cane. Although Ali fights on valiantly Omos wins with his chokeslam.

Anderson wins with a sneaky punch to the “lower abdomen” and a roll-up. Rhea carries Damian part of the way up the aisle as he cups his injured crotch.

Dexter Lumis versus The Miz

The Miz comes down to the ring complimenting Canada. Tim Hortons is better than Starbucks, he says. “I love everything about Canada except…the people,” he snickers. Stealing a page right out of “Ravishing” Rick Rude’s playbook he tells all of the “fat, ugly, out of shape, Toronto sweat hogs” to keep it down while he shows everyone was a “real man looks like”. The Miz shimmies off his robe and poses gyrating his hips the entire time. He doesn’t think Toronto deserves a match tonight and is about to leave until his opponent Dexter Lumis shows up. Eventually, Baron Corbin interferes during their match. He and The Miz kick the snot out of Lumis. Johnny Gargano rushes into the ring with a steel chair. He challenges Corbin and The Miz to a tag team match so we have…

Dexter Lumis and Johnny Gargano versus The Miz and Baron Corbin

The two teams battle on the floor. The heels throw Gargano into the steel ring steps taking him out of most of the match. Gargano makes a comeback though and ends up pinning The Miz.