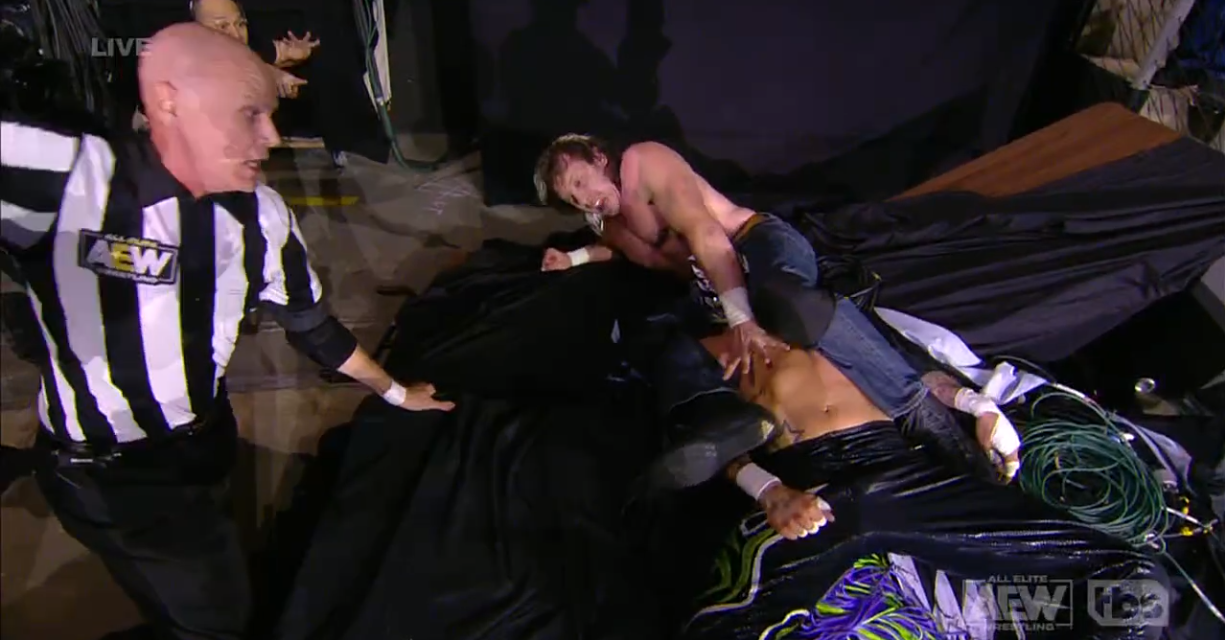 It’s Wednesday night and AEW is going live! Just because it’s the holidays doesn’t mean Dynamite is taking a break. They lean into it with New Year’s Bash! We have the sixth match in the best of seven series for the Trio Tag Team Championship, so let’s get right to the action.

Before the bell rings, AEW World Champion, MJF, interrupts from luxury suites with a girl on his arm. (And despite what the internet is saying, this woman is not Shotzi.) Page takes advantage, jumping a distracted Bryan. Page then starts yelling at MJF. Bryan goes up and over in the corner and then connects with a flying elbow strike. He kicks and chops away at Page in the corner. Danielson tries to lock in a flying surfboard, but settles for stomping on his knees. He follows with an Achilles stomp. Page lays out Danielson with a back elbow and takes him up top. Bryan hits a missile drop kick. Hathaway leaps to the apron; Danielson knocks his hat off and then dodge an attack from Page, who goes to the floor. Danielson wipes him out with a suicide dive. Page catches Danielson with a big boot on the apron.

After a commercial break, Danielson lands an uppercut and Page responds with an elbow strike. Bryan drop Page into the turnbuckle and then chops and kicks away at him. Danielson drops Page with a hurricanrana off the top rope. Page is sent to the floor and Danielson follows with a drop kick. Page slams Bryan into the ring steps and follows with a powerslam on the floor.

In the ring, Danielson counters a slam with a DDT, but can’t get the pin. Bryan locks in the Lebell lock, but Page is able to pull himself to the ropes. Page catches Bryan on the top turnbuckle and looks for the Ego’s Edge. Danielson fights his way out, countering with elbow strikes. Page fights back with a power slam from the middle rope. Danielson breaks free of the Ego’s Edge, again, and delivers the Psycho Knee. Danielson stomps on Page, knocking him out before he can apply the submission.

Wardlow says there have been two many words; tonight there will be action. Well, Wardlow got more than he bargained for and Samoa Joe attacks him during the interview, striking him in the knee.

The Dark Order are looking out for their boy, Adam Page. They want him medically cleared before getting back in the ring.

Darius and Dante Martin try to attack their opponents before the match. It does not go well. Once the bell rings, Moxley dominates Darius; he and Claudio takes turns beating on him. Dante tags in, landing a big cross body on Mox.

After a commercial break, Claudio takes Dante corner to corner with European uppercuts. Castagnoli covers after a drop kick but can’t get the pin. Dante fights off the Giant swing, but Darius ends up go for a spin. Dante makes the save a nearly gets a roll up. Dante with a DDT, but still can’t get the three count. Darius saves Dante from a pop up uppercut. Darius hits a Spanish Fly, but can’t get the pin. Claudio hits the Neutralizer, but Darius kicks out. Mox hits Dante with the King Kong Lariat as Claudio rains down elbows on Darius. On the floor Mox, plants Dante with the Paradigm Shift. Castagnoli with a huge uppercut to Darius and finally gets the pin.

Backstage, Kip Sabien addresses the Best Friends. He says it’s time for the final act where he takes the All Atlantic Championship from Orange Cassidy. With some round about logic, Orange says Trent gets a title shot first. He’s serious and it’ll be Friday on Rampage.

Hook squashes Lynx in under two minutes. He locks in Redrum and Lynx taps.

After the match, Stokely Hathaway, Big Bill and Lee Moriarty walk to the ring. Jungle Boy runs down, taking out Moriarty to even the odds. Big Bill steps to Hook in the ring, and despite the size disadvantage, Hook does not back down. Hook nearly gets the T-Bone. Bill wants a choke slam, but Jack Perry makes the save with a 2×4. Big Bill escapes the ring before JB can do more damage.

Chris Jericho calls out Ricky Starks for not joining the J.A.S.

Renee Paquette is backstage with Swerve Strickland, who introduces his replacement for Keith Lee. Wheeler Yuta challenges Swerve to a match on Friday.

The match starts in the back in a tight hallway. Kenny Omega takes a brain buster on a wooden palate. Pac with a moonsault onto the Bucks. Rey Fenix is back dropped through a catering table. Pac is wheeled into a super kick. Nick Jackson with a cannon ball on Penta through a table. The fight goes to the stage. Fenix is atop the set, waiting. He takes out the Bucks and his teammates with a twisting dive. Kenny Omega comes out of know where to blast Fenix with a super kick. Pac with a German suplex on the stage. Matt Jackson saves the match by breaking up the pin. Matt takes Pac for a ride, hitting  series of suplexes down the ramp. He nearly gets the pin on Penta and Pac, but they are able to kick out.

In the ring, Death Triangle bring in a trash can. The stuff Omega in it and deliver a triple drop kick. Nick Jackson catches Pac with a knee in the corner. Penta with a sling blade. Matt Jackson hits a destroyer. Omega with a snap dragon to Pac. He drills Pac with a trash can. Omega hits the V Trigger on Pac wearing the trash can. Omega hits the Doctor Bomb, but can’t get the pin. Penta yanks Omega out of the ring and Fenix hits the Fear Factor. Nick breaks up the pin. In the ring, Rey takes out the Bucks with a hurricanrana and cutter combo and then flies through the ropes to wipe out Kenny. Nick Jackson with a back body drop on Penta on the apron. Matt sticks him with a DDT. Pac breaks up the pin. Nick starts chucking chairs at people. Penta eats the BTE Trigger, but Pac breaks up the pin.  Nick accidently super kicks his brother. Pac locks in the brutalizer on Matt. Out in the crowd, Omega hits Fenix with a one winged angel through a table. Omega gets the three count right before Matt Jackson taps out.

Willow powers out of waist lock from Tay. She kicks her in the face and hits an overhand chop. Ruby tags herself in and Melo bails out of the ring. Tay yanks Soho off the apron as Ana works over Willow in the ring. Ruby gets the hot tag, pummeling Tay to the mat. Soho drive Melo face first into the middle turnbuckle. Ruby hits No Future on Melo, but she kicks out of the pin. Nightingale takes out Anna with a lariat, only to eat a pump kick from Melo. Soho with a knee strike to Melo and follows with a back drop. Jay breaks up the pin and sends Willow hard out of the ring. Melo hits Ruby with a DDT. Willow breaks up the pin by tackling Anna into the pin. A snap suplex takes out Anna on the floor. Ruby and Tay trade head butts. Anna grabs a chair, but is stopped by the referee. In the ring, Melo has a chair and kicks it into Ruby. Melo hits the Tay KO and covers to get the win.

Lexi Nair asks the Gunns why they are leaving. They have a reservation and are still in party mode after beating FTR last week.

Ricky Starks is going to get revenge on Chris Jericho for Action Andretti next week. Jericho doesn’t like that Starks thinks for himself.

Before the match, Samoa Joe addresses the crowd, saying Wardlow will not be competing. Wardlow has something to say about that. He fights off medical staff and hits the ring. The match is on. Wardlow powers Joe into the corner. He takes down the champ with a shoulder block, but he is favoring the knee. Wardlow with a spine buster and rains punches down on the champ. Joe slams Wardlow down in the corner. Wardlow answers with a clothesline. Joe hits a knee breaker.

After the commercial break, Wardlow is really favoring his right knee. Joe works over the knee, hammering on it. Joe takes Wardlow up top. The challenger sends Joe back to the mat. Wardlow hits a senton, but can’t make the pin. The two men trade blows in the middle of the ring. Wardlow rips off a Garman suplex and follows with another. Wardlow hits a splash in the corner and then hits a back flip. Wardlow is slow to get up. Joe takes a hard head butt. Wardlow with the big strike, but can’t get the pin. Joe with a leg sweep. Wardlow hits a power bomb out of the corner. Wardlow wants another, but his leg gives out trying to pick Joe up. The champ hits a chop block and locks in the Coquina Clutch. Wardlow gets choked out and the ref calls for the bell.

After the match, Joe blasts Wardlow with the title belt. He then grabs a pair of scissors. The Acclaimed won’t like that. Joe head buts the ref and proceeds to cut of Wardlow’s ponytail. Darby Allin’s music hits, but Allin comes in from behind, laying out the champ with a shot from the skateboard. Allin picks up the TNT title as Joe fumes on the ramp. See you in seven!

It’s a shame that The Elite and Death Triangle only have one match left in the best of seven as they are putting on bangers every week. Bryan Danielson and Ethan Page started off the show with a decent match as MJF watched from the luxury boxes. And looks like the Darby Allin wants another crack at Samoa Joe, after the TNT champion defended his title against Wardlow and then gave him a haircut.