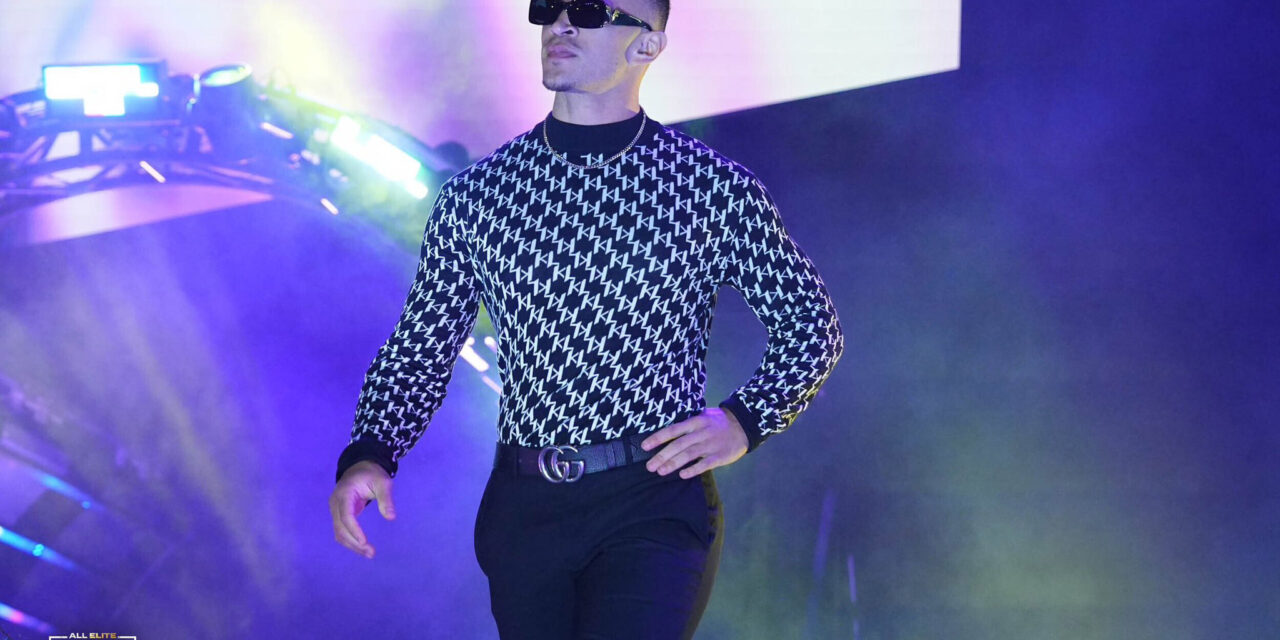 With the final live major wrestling broadcast before the holiday season, AEW had extra attention tonight. Let’s see how they took advantage of the starved audience with Holiday Bash.

We start with Ricky Starks on the stick, wearing one of the most butt ugly shirts I’ve ever seen. Seriously, is this supposed to be one of those 3D images from the late 1990s? Stare at it long enough, and you’ll see Dwayne.

Starks rips MJF over how he won last week before saying he’ll be back in the Championship picture. This draws the JAS out, or at least a portion thereof. Chris Jericho is up on the stick, and offered a spot in the Society to Starks. The split-screen presentation is a nice little touch in this promo battle. The fans chant “Rocky”… oops I mean “Ricky” during this promo while Starks refuses entry into the brotherhood.

The end result is Starks being blindsided by Jake Hager and ultimately beat down gang style until Action Andretti comes out to even the odds. I’ll say this, he looks damn impressive, we’ll see soon enough if he can talk.

The Elite vs. Death Triangle (Match 5, No DQ Match)

If anyone going into this match thought they were going to see the series end, they need to learn more about the history of “best of” series in pro wrestling.

Question – how much longer are we going to call the Jacksons the “Young” Bucks?

Action starts fast with superkicks. Shocking, I know. Dives to the outside follow.

The various outsiders get involved in the action, because no DQ, as this car crash fest almost goes off the rails. Penta Wazzaups Nick with a trashcan. Fans chant for tables, because of course they do.

For the record, I like some flippy-floppy wrestling, but this is too much. There’s no flow, just highspot after highspot.

Picture-in-picture sees tables come out as a Christmas tree is introduced to the fray. If this was WWE… oh you know where I’m going.

Omega sells being thrown into the tree like it’s a series of thumbtacks.

Superkicks continue like a Shawn Michaels highlight reel. Nick kicks a chair and sells it well. PAC goes for the Pillmanizer but Omega blocks with el can du trash.

Moonsault with can does as much damage to Omega as it does PAC.  Then he brings out the barbved wire broom, because he’s The Cleaner. Fenix eats wire. Two DT’s are laid out on tables and we get breaks courtesy of the Bucks. Nick looks like he’s banged up on the ankle.

Omega gets caught up in the wire after a silly move. The fans chant “This is Awesome”. They are incorrect.

One Winged Angel is reversed into a Rana (NOT a Hurricanrana despite what the broadcasters say). Hammer blow by Fenix on Omega gets two. PAC uses tinsel as part of the Brutalizer. Ok NO ONE can cheer for this and rip on WWE’s upcoming Miracle on 34th Streetfight.

SNAP German by Omega leads to the Jacksons hitting a Meltzer Driver on a chair for the duke.

I’m sorry for making this sound more exciting than it was.

Post-match, Death Triangle are sore losers and bloody up the Bucks. I’ve wanted to do an AEW review for along time, just so I can say, it’s a clubberin’, Tony!

Footage airs from last week of MJF running off like a scalded dog then going crazy on Bryan Danielson.

Action Andretti is interviewed by Schiavone until JAS lackeys interrupt and is distracted enough to eat a fireball from Jericho. And again we get a too-quick cut back to the ring. This is getting Russoriffic.

Renee Paquette is out to talk with Bryan Danielson and asks about the future of the Blackpool Combat Club with Regal now turned and/or gone.

Danielson talks about his history in Texas and we get an HBK chant. Danielson refocuses on MJF and calls the champ out. Instead, we get Ethan Page and Stokely Hathaway. Page talks about how he’s owed a title shot, instead of Danielson. Dragon goes cheap with a bald insult on Hathaway. Danielson calls Page out for a match, but Page defers to next week.

Jon Moxley is up next and promotes the big Battle Royal coming up on Rampage, then turns attention to “Hangman” Adam Page.

Back from break, Samoa Joe wishes a happy holiday season to all, including Wardlow.

So we had Optimus, then Rodimus, and apparently now Exodus. Sigh.

This is little more than a Hook exhibition, which I’m fine with since the kid has been nearly exclusive to Rampage.

Before the win could be officially announced, we cut to Big Bill (sigh) chokeslamming Jack Perry into a dumpster. This doesn’t really get much of a reaction from Hook, who casually makes his way up the ramp, while Jon Moxley’s music plays. “Bro… let me tell you something, bro…”

Moxley’s elongated entrance is for some reason showed picture-in-picture.

Disrespectful pushes to start before we get into mat action. Mox is clearly above this, it’s practically a JTTS match. Action goes to the outside and Mox brings the action into the crowd. I guess the 10 count stops when they leave the ringside area. Dante Martin mouths off to Mox and gets a shove.

Mox pushes Darius around and it sounds like the ref is mic’d up. Darius gets a couple shots in while Dante and Castagnoli discuss things. Mox keeps sending the action to the outside, seemingly searching for the countout humiliation.

Once in the ring, Mox goes to the hammering elbows before yanking Darius up. Blow battles favor Mox (shockingly) at first. Darius hits a beatbox back kick and slices Mox hardway. Darius hulks up but Mox is just pushing him around. Darius either has a nose or lip cut now. Mox goes to the captive stomps and more hard strikes before a chin lock.  Death Rider and it’s done. Decent match for what it was.

Powerhouse Hobbs’ story continues and I’m really not sure what they’re trying to do here. Are they making Hobbs a face all the sudden?

FTR are down to two belts when they really should be up to four. This is the hottest tag team in all of pro wrestling and they’re getting treated worse than they were in WWE.

FTR dominates early, and as so they should. I still don’t get why the Gunns are in the spot they are, but hey that’s me.

Picture-in-picture shows more domination by FTR, but eventually the Ass Boys get the ADV.

Pretty standard action overall with the Ass Boys wearing Hart Foundation pink. I point this out because it’s the most intriguing thing I see from the Gunns.

Hot tag to Dax Harwood intensifies the action until both Ass Boys get involved. Harwood tries for the Scorpion Sharpshooter until one of the Ass Boys breaks things up.

Cash Wheeler interrupts the Stuff Piledriver on the outside.

Ass Boy #1 tunes up the band, goes for a crotch chop, then a Sharpshooter. God this is like watching two Dolph Zigglers (and not in a good way).

FTR are wrestling brooms in hot pink. If there was ever a tag team equivalent of Ricky Steamboat this they be.

Lethal, Dutt and Co. make fun of The Acclaimed and do a horrible job of it. I’ve never seen what people see in Lethal, to be honest.

Rick Ross (who?) is out to mediate between Swerve Strickland and Keith Lee.

Strickland stands on the outside while Lee waits in the ring with Ross. Suddenly, Parker Boudreaux attacks, but Lee reverses things and sends Boudreaux out of the ring in short order. Lee heads toward Strickland, only to be assaulted by a tattooed up bloke who no one can identify. Boudreaux joins the fun again. Apparently Ross is a heel manager. Lee is then laid out on the steel steps with a cinder bloc on his belly, which Strickland destroys with a Coup de Gras. Okay that was a cool spot, but I’m totally confused.

Hayter has the crowd behind her.

Even Stephanie to start.

Hayter plays the heel, even though she’s clearly the face. Shida eats a suplex into the corner before the action spills out of the ring and Hayter continues to dominate.

Back in the ring Shida gets some offence in but this is isn’t competitive. A Jackhammer is called a “transition” by Excalibur. It gets two.

Excalibur is so into this match that he decides to plug everything happening next week.

Shida gets the corner 10 punches then a second-rope Missile Dropkick. She then tries the CesaroPlex, and ails at it. The two end up on the apron and Hayter goes for a German to the outside. No dice. Shida gets a suplex to the outside which hurts both. Sigh.

More on the outside as Hayter narrowly beats the 10-count in. She should’ve just stayed outside and, you know, kept her title.

Back inside the ring the heat continues. Hayter misses the Moonsault. Shida hits the Shining Wizard for two. Hayter plays possum and powers back. Basement Lariat gets two. Uranage Backbreaker gets two as well.

Shida gets a strike series until Hayter again goes possum. Snap German leads to Baker getting on the apron wiht the Kendo in hand. Shida uses the weapon to get Baker away, all the while Rebel is distracting our referee. Hayter gets a kneeling powerbomb for the false finish. Lariat gets two. ripcord gets the duke.

Post-match, the “heels” celebrate and then take out Shida until Toni Storm runs down. Hayter with the weak beltshot (only because she’s deservedly exhausted). Saraya comes out and takes out Rebel quickly, then the good doctor. Saraya as the next contender… or Sasha? Hmm…

This ep was definitely saved by the finale.