AEW Battle of the Belts III: Castagnoli and Takeshita deliver a match with honor 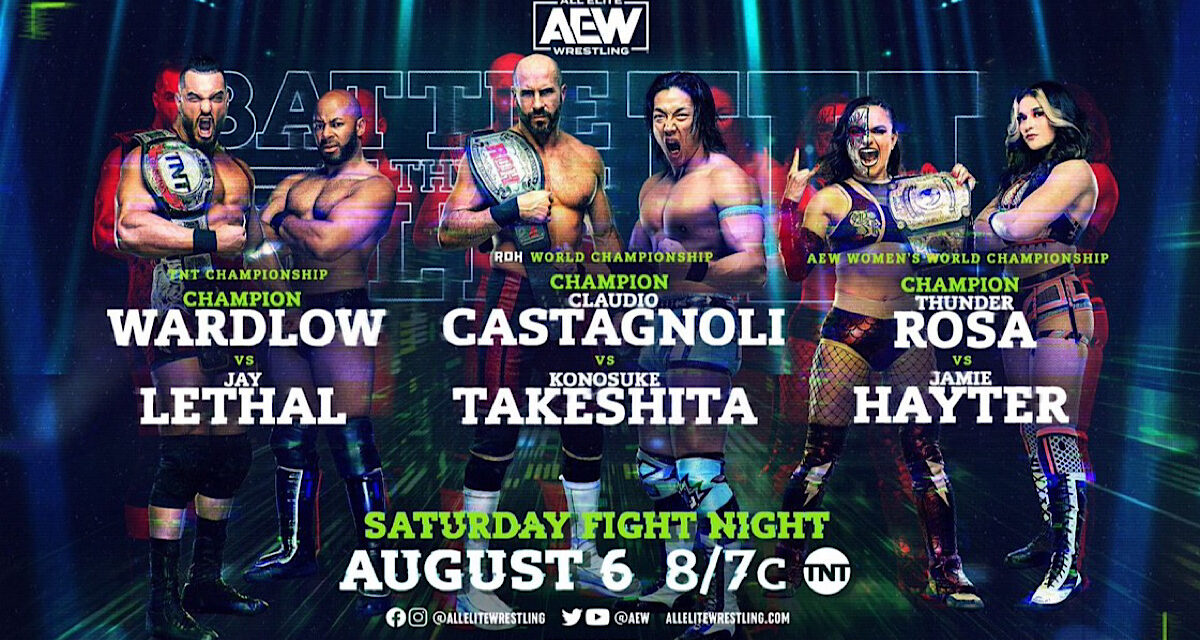 It’s Saturday Night, and you know what that means?  Yeah, there’s no PPV this week, but it’s time for the event fans of All Elite Wrestling are waiting for.  It’s the Battle of the Belts, and every title tonight is on the line. From the ROH World title to the Women’s title to the TNT title, this is a night of champions (which the name is probably owned by some other organization).

We go to the Van Andel Arena in Grand Rapids, MI. Excalibur, Taz, and Tony Schiavone have the call, and Justin Roberts is in the ring to announce your First Match of the night for the …

Quick poll:  am I the only one who thinks Wardlow is what happens if Brock Lesnar and Goldberg had a child? What, just me?  Ok, fine.

At the start, Dutt gets up on the apron, and as Wardlow turns his back, Lethal takes advantage with a suplex and he no sells it.  It’s all power from Mr. Mayhem, despite shenanigans by Lethal and company.  Wardlow nails a Tiltawhirl backbreaker to cover for a two count.  At one point, Lethal pulls up gamey favoring his leg. As the ref pulls away the champ so he can check, Lethal sneakily rolls up for a two count.

Now Wardlow rushes and his momentum has him connect with the ring post. Lethal sends out and hits the tope suicida for good measure.

Lethal wraps leg around ring post during Picture in Picture, and now he’s in control, targeting the bad leg to soften it up further.  He tries the Figure Four (woo!), but Wardlow rolls through.  Wardlow attempts the powerbomb symphony, but Lethal keeps escaping.  Wardlow winds up and connects with a lariat that turns Lethal inside out.  One powerbomb later and it’s all over.

After the match, Dutt and Singh attack Wardlow. He fights them off, and punts Singh right through the goal post for, as Taz calls it, “Yambag Yahtzee”, but the numbers game catches up. Dutt and Lethal set the table and an emphatic chokeslam by Singh to Wardlow through the table, sending a powerful message.  Wardlow got the pyrrhic victory, to be certain.

Satnam Singh takes TNT Champion Wardlow for a ride through the table here at #AEWBattleOfTheBelts III on TNT! pic.twitter.com/rAohybUjBt

As Rosa poses in the corner for the fans, Hayter blindsides her from behind and she is on offense from the get-go.  Hayter is in complete control, with the Dr. And Rebel cheering on.  But Rosa fights back and lands a dropkick for some separation. Hayter rolls out of the ring and Rosa attempts a tope but Hayter knocks her out with a forearm.  On the outside of the ring, the champ is thrown into the guardrails and Hayter goes for a suplex but Rosa reverses to a DDT to the floor.

Thunder Rosa delivers a nasty DDT to Hayter right on to the hard surface of the floor here ot #AEWBattleOfTheBelts III on TNT! pic.twitter.com/7o9UDw9ulU

As the champ tries to get momentum going, Baker takes the belt.  Rosa sees this, and Hayter uses the distraction to knock off and then gets planted on the steel steps.  During Picture in Picture, Hayter sends Rosa back in the ring and she womanhandles her with ease, but can’t get her pinned. She takes her time wearing down the women’s champion. Baker and Rebel try to insert themselves to add more injury to Rosa, only to have Storm chase them off. Then we get…

Back to the match, and Rosa is up to a vertical base and fires back.  It’s a slugfest between the two combatants, and Rosa gets a nasty-looking dropkick that connects and leaves Hayter outside the ring and the floor, and then she connects with a senton to the floor on her prone body.

Dropkick by Thunder Rosa almost decapitates Hayter here on #AEWBattleOfTheBelts III! Tune in to TNT to catch the action! pic.twitter.com/mz8AiZo9HL

Back in, Rosa gets a crossbody for a two count. Rosa pushes to the ropes and Hayter review to a backbreaker to cover for a two count. She nails a brain buster and still gets two.  Baker tries to choke out Rosa from  the outside, and now Storm takes her out of the equation.  Rosa gets Hayter in a sunset flip fotwo countount.  She attempts at it again, and now gets the three count.

Your Winner via Pinfall:  Thunder Rosa

Afterward, Rosa gets into the crowd and celebrates with the fans

Caprice Coleman joins commentary, as does William Regal.  Bobby Cruise (the best voice in the business…sorry, Roberts) is in the ring and he announces the Main Event of the Battle of the Belts is for the…

This is Castagnoli’s first title defense, and Takeshita will be tough competition, given that the announcers mention he is the student of Jun Akiyama from All Japan.  The Code of Honor is observed at the start, and as the bell rings Castagnoli tries a lariat but Takeshita ducks.  From there, the match goes to a traditional wrestling match, and each man goes hold for hold.  Castagnoli gets a test of strength to drive Takeshita’s shoulders to the mat, but he bridges up to avoid a pin. They go up, and Castagnoli gets a monkey flip to get some space.

Takeshita picks the ankle and then hip tosses the champ, and both men go back and forth until Takeshita nails him with a leg lariat.  Castagnoli rolls out and Takeshita leaps but misses the mark, and Castagnoli rams him into the ring apron hard.  Back in the ring, he gets a backbreaker and another elbow to soften Takeshita’s back for the Ricola Bomb.  During Picture in Picture, Castagnoli comes swinging with European uppercuts and then a backdrop suplex for a two count.

Castagnoli goes to a bow and arrow variation and then transitions into a sitting sleeper, but Takeshita fights up to a vertical base and then gets a vertical suplex that rocks both men.  Castagnoli comes back with a running boot and back to a backbreaker, but Takeshita gets a huracanrana and runs the ropes to a flying clothesline.

He launches to a tope con giro to Castagnoli on the outside and he climbs up the top turnbuckle but gets cut off with a European uppercut by Castagnoli and he brings him down with an avalanche gutwrench suplex for a two count.  Fans request and the champ obliges with the Giant Swing and covers for a two count.

Takeshita gets a boot to the corner followed by a Blue Thunder Bomb for a close two count.  The match goes to the wire as Takeshita rams his head to the top turnbuckle, and he follows with what was described as a top turnbuckle DDT (he just drops his head and finishes with a front splash for a two count.  Takeshita goes for the signature diving knee, but it is scouted and then he shoots to the ropes but Castagnoli with a European uppercut to cover for a two count.  Now he goes to a sharpshooter and then transitions to a crossface, but Takeshita rolls him up to a pin so he breaks the submission.  Both men are throwing everything to get a win to the fans’ delight. Takeshita finally nails the diving knee and follows to a brainbuster for a close two count.  Takeshita measures him and he connects with a discus elbow, and he attempts a powerbomb but can’t pull it off because of all the damage done to his back.  Castagnoli reverses with a powerbomb attempt of his own but Takeshita rolls up to a pin, but no dice.  Castagnoli nails a desperation DVD to create space, and he gets a springboard European uppercut to Takeshita.  He follows with the signature Blackpool hammer and avail elbows into the Ricola bomb, and that ensures Castagnoli gets the one, two, and three.

Fans are still applauding the Swiss Superman on a successful defense as the show goes to credits.

Not a lot of surprises for this Battle of the Belts, but it does set up some interesting angles, from Wardlow doing battle with Lethal and company, to Rosa adding more to her feud with Baker.

Castagnoli and Takeshita tore down the house, and proved why Honor Lives for ROH, and AEW to some extent.  This is a motivated and happy Castagnoli, and here’s hoping he continues his winning ways.

For now, see you for the next Battle of the Belts!