MLW Fusion: Fatu and Krügger go to war with Weapons of Mass Destruction 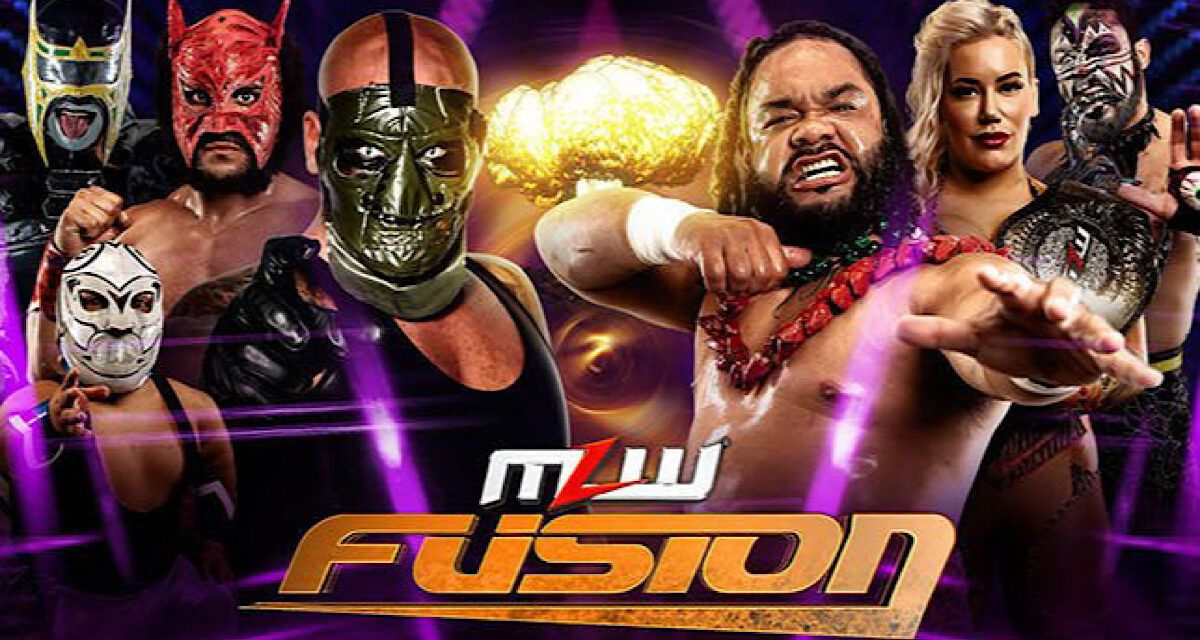 As Major League Wrestling sets the stage for Battle Riot IV, the feud between Jacob Fatu and Mads Krügger reaches a fever pitch with a Weapons of Mass Destruction match.  With Myron Reed looking to cement a title defense for the MLW Middleweight belt and the Los Maximos in action, let’s get to the ring.

Mads Krügger promo starts off, and he clearly(!) states Fatu took his purpose and the body count will rise as he drags him to hell once and for all.

We come to you from the ECW Arena in Philadelphia, PA.  Rich Bocchini and Joe Dombrowski have the call.

Myron Reed and Davey Richards chat before his match, and the American Wolf offers encouragement.  Wonder what that’s setting up down the road?

Well here comes the First Match of the Night, and it’s a triple threat match for the…

The match is a complete spot fest, and it s not long before it spills out to the floor.  Navarro gets both Red and Arez in a springboard double DDT from the ring apron to the floor outside the ring.

Reed is sent to the outside, and Arez and Navarro battle it out in the ring.  The King of Strange style uses the  ropes for a springboard facebuster variation to cover, but The Young G.O.A.T. breaks the count.  Holidead on the outside distracts Reed by trying to trip him up, and Arez uses the opportunity to attempt a roll up for a two count.  Navarro dives to the outside to neutralize Strange Sangre, and gets the  Jesus Peace on Arez.  But Reed gets his signature Flame On cutter to Navarro and transitions to the Cap’n Crunch on Arez and pins Navarro for the decisive win.

After the match, Reed wants the best and says he’ll be at Davey Richards’ training camp in St. Louis.  Bocchini asks if he’ll face Richards, and Reed give him a look like he stunk up the joint.

Alex Kane and Mr. Thomas have a press conference about why they haven’t had the smoke.  Kane needs something worth his while rather than dealing with this nonsense.  He offers $20K for anyone that can last twenty minutes with the leader of the Bomaye Fight Club.  I’m curious who will will step up to Suplex Assassin.

One half of the MLW Tag Team champs, EJ Nduka joins at commentary to scout out the next match in the tag division and its…

This is a homecoming for Los Maximos and Bocchini makes sure to mention that they are the most innovative tag team in MLWs over-twenty year history.  But this is a squash match by any other name,, so here is a Haiku Recap:

And say “adios” with a

No one does it better than the originators… Los Maximos with the Spanish Fly!

Your Winners via Pinfall:  Los Maximos

During the match, someone attacked Calvin Tankman, and Nduka went back to check his tag partner.  After the match, the Maximos say they are the OGs of MLW, and they want the tag belts.

“El Jefe” Cesar Duran meets with Arez and Gangrel in a dark area and addresses the issues they have with Microman.  Duran offers them a chance to take care of the little thorn in his side next week, and both men agree.  With that, Duran says it’s time to take care of the Samoans.

The clock is one minute to Doomsday, as a Killer Kross video package has The Tollman say tick tock.

There are plugs for the upcoming Kings of Colosseum show on July 14,  with the main event signed for the MLW Heavyweight title between the champ Hammerstone and Richard Holliday.  Your Boy Hammer promises that he will get what’s coming to him.

On July 14 at Kings of Colosseum, The long awaited match between World Heavyweight Champion @alexhammerstone and former Dynasty teammate @MostMarketable finally goes down!

Tim Barr goes over the rules of the Weapons of Mass Destruction match, and it’s basically a No Holds Barred match where you can only win by Pinfall or submission.  There is no time limit and the ring is outfitted with “military grade weaponry” (and one of the boxes had “Anthrax” labeled on it.  Eh, you buy the bit, you buy the premise).

As Barr introduces both men to the ring, Fatu throws a steel chair at Krügger and subtlety just checked out of this match.  He grabs a kendo stick and swings away at Krügger, but The Black Hand returns the receipt with bakklei club blows to the body.  As the Philly faithful chant, “F*** him up, Fatu!  F*** him up! (Clap!clap!)”, he obliges happily by setting up a table at ringside.  He goes after the big man, and Krügger throws a powder in his eyes.  Blinded, Krügger uses that moment to nail a Gonzo bomb from the ring apron that gets the edge of the table at ringside in a scary looking spot.

Krügger gets a gasoline can, and puts the boots to Fatu but the Samoan Werewolf chops back, and Hr gets The Black Hand with a spear.  Fatu then grabs a bakklei club, but Krügger choke slams him and then the club lands in his hands as he clocks him across his head.  Krügger drapes the Contra flag on Fatu’s prone body and douses it in gas.

MADS KRÜGGER IS DOUSING FATU ALONG WITH THE CONTRA FLAG WITH GASOLINE!!!

As he gets a lighter,  Fatu gets the flag off him and throws the South African outside the ring.  He follows with a dive over the top rope to the outside of the ring.  As they head back in the ring, both men light up with chops to the chest and each man delivers the other suplexes.

Fatu gets the pop up Samoan Drop, but Krügger manages get up the middle turnbuckle to land a Canadian…err, South African Destroyer.  That should’ve stopped him, but Fatu is back up with a Superkick and then follows with a twisting senton from the top turnbuckle.  Fatu goes up for the Moonsault finisher but can’t cover Krügger as The Black Hand rolls out of the ring.  Fatu goes on the attack and  hits a suicide dive from the ring to the floor.  Now a stretcher at ringside gets involved , as Fatu gets him on it and hits the flagpole across his chest.  Fatu gets on safety gloves and drives a roll of  barbed wire into his chest.  He then gets back in the ring, climbs up the top turnbuckle  and delivers a splash to Krügger still laying on the stretcher with the barbed wire, and he bounces off taking the brunt of the offense.

Fatu rolls him back in the ring to cover, but Krügger goes for an arm triangle submission.  Fatu fights off and then rushes at him, but Krügger gets a pop up powerbomb to the Samoan.  Now the Sentai Death Squad of Contra Unit come out and they send a ladder in the ring.  As Krügger gets things set up,  the Death Squad start dismantling the ring, but Fatu takes them ou.  The distraction is enough time for Krügger to get a lariat on the Samoan Werewolf.  Now a table is set in the ring, and Krügger picks up Fatu for another choke slam, but he escapes the hold and slams a chair on his skull, causing him to crash backwards into the table, as the blown spot causes it to crumble.  Fatu quickly makes it up as he climbs the ladder and deliver the Samoan splash to  cover for the one, two, and three.

Your Winner via Pinfall:  Jacob Fatu

After the match, Krügger gets back up and the fight is not over as they battle still outside the ring and Fatu shoves his head in a box marked “Biohazard.”  As The Black Hand is incapacitated, Fatu comes away with his mask, and slams the lid on The Black Hand.  He celebrates with his new trophy, as staff try to get Krügger out of the box as the show fades to black.

.@SAMOANWEREWOLF celebrates with his trophy!

The middleweight match was short, but the segment with Richards and Reed shows promise.  Los Maximos don’t show any ring rust as they establish themselves back in the tag ranks.  But Fatu and Krügger added another element to their feud that could’ve gone on longer.  I hope that wasn’t the end, and they fight forever.

Michael Patrick Rogers with be back next week, so see you in seven!