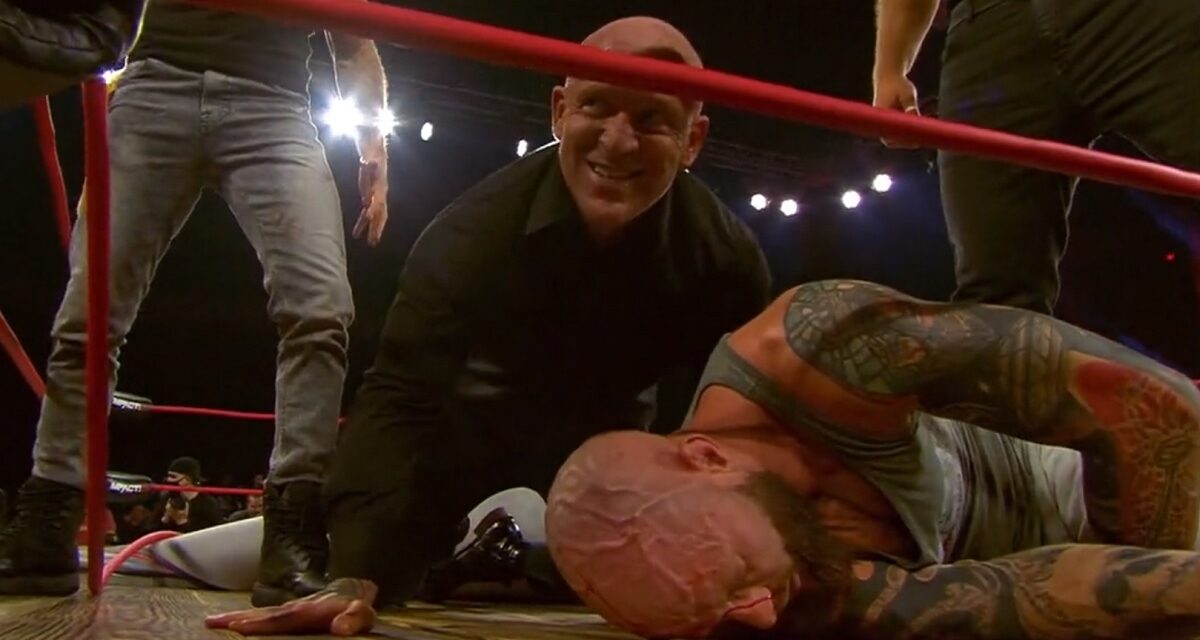 If there was any doubt that Eric Young had designs on Josh Alexander’s Impact World Championship, he left no doubts on Thursday night, driving home the point violently by leaving Alexander in a bloody heap. It was a strong ending to an otherwise middling “go-home” show that featured a match so bad that it was good. Actually, no. It was just bad.

Chelsea Green and Deonna Purrazzo were shown watching this show in the back. They, along with Grace and Yim will be vying for Steelz’ Knockout Championship this Sunday in the Queen of the Mountain match.

Evans and Yim started off and pretty much everything they did looked terrible.

Things got a bit better when Tasha came in, but not much. Yim finally broke loose and tagged in Grace, who rocked Steelz with a great Spinebuster, and a Grace Bomb, and then locked Steelz in a submission move. Evans looked bad making the save and then getting thrown out of the ring. She looked bad seconds later when all four women started scrapping, and it looked like she was out of position for an attempted dive by Grace that had to be abandoned mid-way through. In the end, Steelz was fighting both Grace and Yim. She avoided a charge by Grace who then ran into Yim. Steelz then rolled up Grace for the win.

This was all kinds of awful. Evans was a disaster throughout. The booking was strange, with the ending seeing the heel valiantly fighting off two babyfaces, and then outsmarting them. Seriously, this is a Worst Match of the Year candidate.

Backstage, Gia Miller asked Chelsea and Deonna if they were going to be working with each other on Sunday. They implied that they would work together until it came down to only the two of them, at which point, any alliance would be broken.

Gia interviewed former Aces & Eights members Wes Brisco and Garrett Bischoff. They reminisced about the good times they had while in Impact. Honor No More interrupted, with Kenny King getting particularly salty. A shoving match ensued but a bunch of refs and security guards and D’Lo Brown broke it up. After HNM were run off, Brisco and Garrett saw D’Lo’s suit and called him out for forgetting what it was like to be in the gang. They badgered him until he agreed to talk to management to make a match between Aces & Eights and Honor No More.

A highlight package aired for Sunday’s Impact World Championship match between champion Josh Alexander and his challenger Eric Young. This was good.

Oddly, Trey didn’t get a televised entrance, which is usually a bad sign. They started off really fast, with things going pretty even-steven. Trey hit the first couple of big moves with some kicks that dropped Bailey. But Bailey turned up the aggression and delivered some hard kicks of his own that had Trey downed, heading into the commercial. Bailey slowed down the pace, beating on Trey in the corner,  mixing things up with strikes, kicks, and submission attempts, like a Half Crab. But Trey found his second win and hit a combo strike/kick attack that stunned Bailey and left him prone for a Dragon Sleeper, forcing Bailey to get to the ropes to break it. They then had a forearm exchange and a kick exchange in the middle of the ring.

They took turns surprising each other with high-flying moves to the floor. Bailey hit some powerstrikes, including a Standing Moonsault Stomp, and a huge Boot to the Head, but Trey kicked out. Bailey went for the Liu Kang Special in the corner, but Trey caught him in the act, rolled him up, and got the pin.

This was good, and got particularly exciting in the second half. It’s surprising and a bit disappointing that they would have had Bailey’s first loss come in a rather low-hyped match; that kind of milestone may have been better if saved for a PPV or at least treated as a bigger deal than just a throwaway commentary line after the pin.

A video package aired running down the bad blood between Moose and Sami Callihan, who will be in a Monster’s Ball match this Sunday.

Unlike the last match, Alisha not getting an entrance for this one seems to be a strong indicator of who’s going to get the win here. As if there were any question, Masha completely dominated, ending things quickly with a Snow Plow.

After the match, Gisele came in to check on Alisha’s condition. She and Masha exchanged a few words, but nothing came of it.

This was another smartly-booked Masha match who continues her ascent up the card.

In the back, Taya Valkyrie excitedly ran up to Rosemary, giddy at the thought of teaming up on Sunday to fact the Knockouts Tag Team Champions, the Inspiration. Initially, Rosemary wasn’t thrilled with the idea, but she got into it when Taya promised she would help Rosemary find Havok if they won.

The Good Brothers joined the commentary team for this one. They started off with some good back-and-forth, until the Bullet Club were flattened by a Flying Somersault Dive by Jay to the floor, which the crowd loved.  But after some dirty tricks, Bey turned the tide with a Flying Dive that took down both the Briscoe Brothers. The Bullet Club isolated Mark in their corner, but he scrambled and eventually got out of it. The teams fought with big moves being hit on all sides. In the end, Bey rolled out of the way of a Froggy-Bow, and after Mark rolled through the landing, he got behind Bey and rolled him up for the pin.

This was a solid match. One might expect the Briscoes will face a lot more Bullet Club interference on Sunday when they defend against the Good Brothers, as opposed to this match where Hikuleo was a non-factor.

They announced that there will be a Reverse Battle Royal at Slammiversary. For nostalgia’s sake, I’ll just say “Fire Russo!” in response.

In the back, Raj Singh let everyone know that Shera had entered the Reverse Battle Royal and was explaining how Shera would win it, but he was interrupted by Johnny Swinger and Zicky Dice.

Elsewhere, Brisco and Bischoff were joined by D’Lo Brown, who had replaced his suit with his old Aces & Eights vest, and said he would be in their corner for their match.

A video package aired for Honor No More who will take on Chris Sabin, Kazarian, Alex Shelley, and two other TNA/Impact veterans on Sunday.

They announced that NWA star Nick Aldis – who formerly competed as Brutus Magnus in TNA/Impact – will be one of those surprise teammates. That’s a great get by Impact.

At the beginning, it looked like this would be contested under Texas Tornado rules, as the two teams just started brawling. The ref finally got some control, and Aces & Eights dominated, sending both HNM guys to the floor before the ad break. Back from commercials, and they were still in control. But very shortly after that, interference by Eddie from the floor distracted Brisco, and Vincent hit him with Orange Sunshine (a modified Sliced Bread) for the win.

After the match, Honor No More surrounded D’Lo. He fought all of them off, and was going to end Kenny King, but Matt Taven and Mike Bennett ran in and the entire HNM faction swarmed him.

They were going to finish him off, but then the Motor City Machine Guns and Kazarian ran in for the save and delivered their finishers to the Honor No More members.

This was okay. There wasn’t really a great flow from the match, and the constant running-in and double-teaming just served to make the ref look bad. The abrupt ending just gave the match an unfinished feeling. The post-match shenanigans were fine, but with the faces definitively winning the battle, is there really a need for the match on Sunday anymore?

Impact Executive Vice-President Scott D’Amore was in the ring to oversee the contract signing. After acknowledging his personal and professional history with the participants in Sunday’s main event, he introduced them: first, the challenger Eric Young, who was accompanied to the ring with his Violent By Design cohorts Deaner and Joe Doering; and then the Impact World Champion Josh Alexander.

Eric took the mic and said that he didn’t care that Sunday was a celebration of the company’s history, he just cared about winning the World Championship.

Josh said that watching Impact as a fan was what motivated him to come back from a broken neck, so he was going to indeed celebrate the company’s legacy by beating EY on Sunday.

After they’d both signed the contract, EY badmouthed Josh, the fans, and the history of TNA/Impact. Josh argued his point, naming off a number of company legends, and saying that Eric Young should be proud of his history in the company as well. He said that the “Showtime” Eric Young that he was a fan of growing up would be disgusted by the Eric Young of today.

This led to them flipping the table over. D’Amore tried to break it up, and actually clocked Deaner. But then EY broke the VBD flagpole over D’Amore’s back, and VBD swarmed Josh. They pummeled Alexander and choked him out with his own jacket. Then they sliced his head open with the turnbuckle arm. Finally, they exposed the boards under the ring canvas, and after choking him with the ring rope, Young hit Josh with a Piledriver on the exposed ring boards.

The show ended with VBD standing over a fallen and bloody Alexander.

This was a good ending to the go-home show, focusing on the main event of the PPV. The use of blood was effective here, and didn’t feel gratuitous. And while the promos may have been a bit muddled, they didn’t take away from the primary motivations of both, which is – and should be – the World Championship.

While the final segment was great, the rest of the show was hit and miss. And, unfortunately, there was a lot of miss, the miss-est of which being the first match. The bringing back of TNA/Impact legends over the past few weeks has made for some fun nostalgia, but of the Aces & Eights members, the ones they brought back were hardly the ones anyone cared about (though the match wasn’t bad). Still, this was all about the final shot – and that helped hype the PPV pretty effectively.