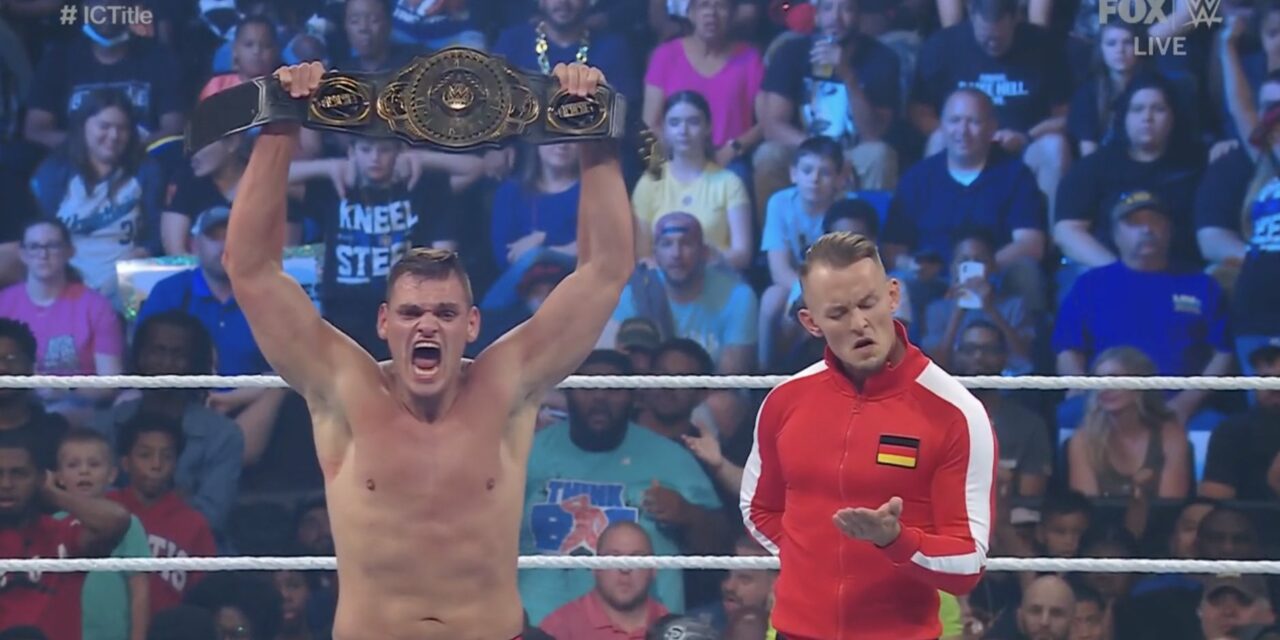 We are close to the Summer part of wrestling, and that’s Money in the Bank. I’m so excited for this because it’s one of my favourite events WWE puts up.

After last week’s outburst emoted by Riddle, which I didn’t really expect, he is on his rampage for revenge. Seeing him angry was surprisingly amusing. His face looked more like he accidentally forgot to flush the toilet and rid of his business.

Anyway, let’s move on from my weird comment to the fighting of tonight.

Drew McIntyre vs. Sheamus – Money in the Bank Qualifying match

Before the match begun, for some odd reason, Butch attacked Drew backstage and in the ring, which McIntyre dealt by unleashing his ‘Claymore’ move to put a damper on the rabid infested animal that is Butch.

Once the brawl is underway, Sheamus flings McIntyre outside the ring, climbs to the top of the turnbuckles and jumps Drew right in front of the announcement table.

Sheamus prepares himself to push Drew into the ring pole, but McIntyre counterattacks with a belly-to-belly throw over his head. The weirdest thing happens afterwards, both boys grab a hold of steel chairs and smack each other in unison, not knowing that the other had a weapon as well. Because of that, the referee called a count out. On who? No idea.

But that doesn’t stop them. They continue to battle it out regardless. If I’m being honest, during their little beat down, both men looked absolutely exhausted. Way too tired. Drew carried Sheamus and collides him with the announcement table with minimal impact that I fell asleep for a second. That’s how dragging it felt.

What woke me up was when the officials finally showed up, since you know, they adore taking their time before some real damage is done. Bravo to them.

Cody Rhodes endured a massive injury during a match he had against Seth Rollins a few weeks prior to Hell in a Cell. He decided to still fight Rollins in the cell days later and won. Rhodes has received a larger amount of respect as he first got it from fans and shockingly Rollins. But tonight, he got a sneak attack from his rival with a sledgehammer, even though, the American Nightmare was so sure he was done with Seth. But Rollins isn’t finished with him.

It was so brutal that I believe there was twice the regular amount of officials trying to stop the onslaught. I almost cried. The audience was stunned, and so was I. Rhodes seemed like he was on the verge of passing out, or crying. The agony on his chest was excruciating to see. He is scheduled for a surgery these coming days.

Aside from that clear act of jealousy portrayed by Rollins, the Viking Raiders are coming to SmackDown. It’s been a little bit since we’ve seen our very own Vikings. Maybe now they can be classified from noticeable to top wrestlers because I’m rarely indulged with their presence.

Li and Evans are two of the female wrestlers I wish I could see a bit more on SmackDown. They hold great potential and skill. After all, I think the crowd was chanting Evans’ name since this is part of her glorious comeback.

The match started off a little slow, but Xia picked up some momentum by slamming Lacey’s face on the mat and repeatedly kicked Evans in the legs and face. Pushing her into a corner. Xia points at the two bank suitcases hanging above her head before rushing towards Lacey to deliver a few punches to the head and suplexes her over her shoulder for a failed submission.

Lacey creates some distance between her and Xia after releasing herself from a chokehold. She manages to push Li into a corner and performs a handstand move on the top rope then lands on Xia’s abdomen.

Evans is awarded the win to qualify for Money in the Bank due to her powerful right hook to Xia’s jaw as she plummets to the mat. Li wanted to make Evans walk away in shame thinking she would obtain the contract, but unfortunately for Xia, she didn’t secure anything tonight.

“Shut up, Ronda!” shouts Shotzi as she makes her entrance to the ring, carrying her gremlin… I mean, biker helmet.

There wasn’t much to the fight aside from this noteworthy moment by Ronda as she wins by submission with her arm bar move to put away Shotzi. Valiant effort, Shotzi, but not quite there yet, sweetie.

Pat McAfee was hoping that Natalya was watching, and apparently, she was. After Rousey’s win, Nattie jumps her from behind and beats her face in with punches to the head. This is going on my favourite rivalry list. I wanted Natalya to come back stronger, and she just started her annihilation. She is here to trample some ass.

Ronda called Nattie’s ‘Sharpshooter’ a cheap imitation of her once glorified move only for it to be inflicted upon her. Rousey didn’t say “I quit” or “get off me”, but she did take the pain as it came. Somehow gracefully.

This is a match I’m not sure I saw coming. Ricochet did somewhat interrupt Gunther’s torment over Drew Gulak every time they fought, so maybe, in a  way this was inevitable. The championship belt; however, doesn’t fit Gunther at all. But alas. This ain’t my doing.

If there is one thing I can say Gunther is exceptional at is his hard and aggressive chest slaps. Oof. It was loud, so my face squinted as Rico flew backwards.

Rico is able to pick some speed by sending Gunther into a corner and tackle his mid-section. Soon after jumping off the top rope, Ricochet is grabbed into a chokehold. We see him struggle to release himself. He rolls Gunther away then attempts to place a boot to his face, yet is grabbed around the waist from the back and thrown over Gunther’s head; although, Ricochet surprises us by landing on his feet.

Ludwig Kaiser tries to distract Ricochet after he removes Gunther’s hold on him, yet our Intercontinental champ delivers a harsh kick to his jaw. The way Kaiser tumbled backwards, he resembled an overstimulated drunk.

Ricochet fought amazingly by sending Gunther a drop kick, but his opponent sent one of his own. Gunther power bombs Rico in the middle of ring for the win. Unfortunately… I’m kind of proud of him though.

Well, the last match of the night is with none other than Sami Zayn and his pathetic attempt at becoming a member of The Bloodline. The rat Paul Heyman sat at the announcers’ table to watch Zayn’s match against Riddle. More like nitpick his battle.

Zayn imitates one of Randy Orton’s moves called the ‘DDT’ to Riddle’s face. Haven’t these guys done enough poor copy and paste moves for one night? I’ll answer the question. No! Because it will find a way to happen again. Little pricks. Heyman enjoyed that too much. He is a snake. We know this.

I was just arguing about imitation as Zayn continues to copy Orton in viper pose, completely ignoring Heyman’s shouting voice as he says: “Cover him!” That kind of disrespect has fuelled Riddle before to ambush Zayn like last week. He could do it again.

Riddle shocks Sami with a knee to the face, as expected. “You mock Orton, you piss off Riddle. And that’s what happened here!” said Michael Cole. Well spoken, my guy. But, I still don’t like that he’s not wearing shoes.

It’s an abnormality to have Heyman be mute for once and tonight, he was mostly quiet. Thank the Gods above! Strange question, but am I the only one who thought Heyman resembled an unglazed donut? Maybe so. I prefer vanilla dip or chocolate dip donuts, so he obviously isn’t liked by me. He’s the pastry I leave behind for the ants to eat.

Heyman was so disappointed in Sami for losing after Riddle performs an ‘RKO’ on his opponent for the win. I love seeing Paul upset, he may not be a stuttering man when it comes to speaking, but the rest of him is just as faulty. I suppose you will not become a DNA member, Zayn. Sucks to be you.

After his victory, Riddle is jumped from behind by the tag twins. This match against Zayn was an opportunity at the Undisputed Championship belts against Roman Reigns next week. Although he was wide eyed by the beating of the brothers to put him out of commission, Riddle found a kendo stick and began whacking the Usos with it. He is supercharged with the power of Randy Orton.