Wrestler’s Court: The AEW champ is … where? 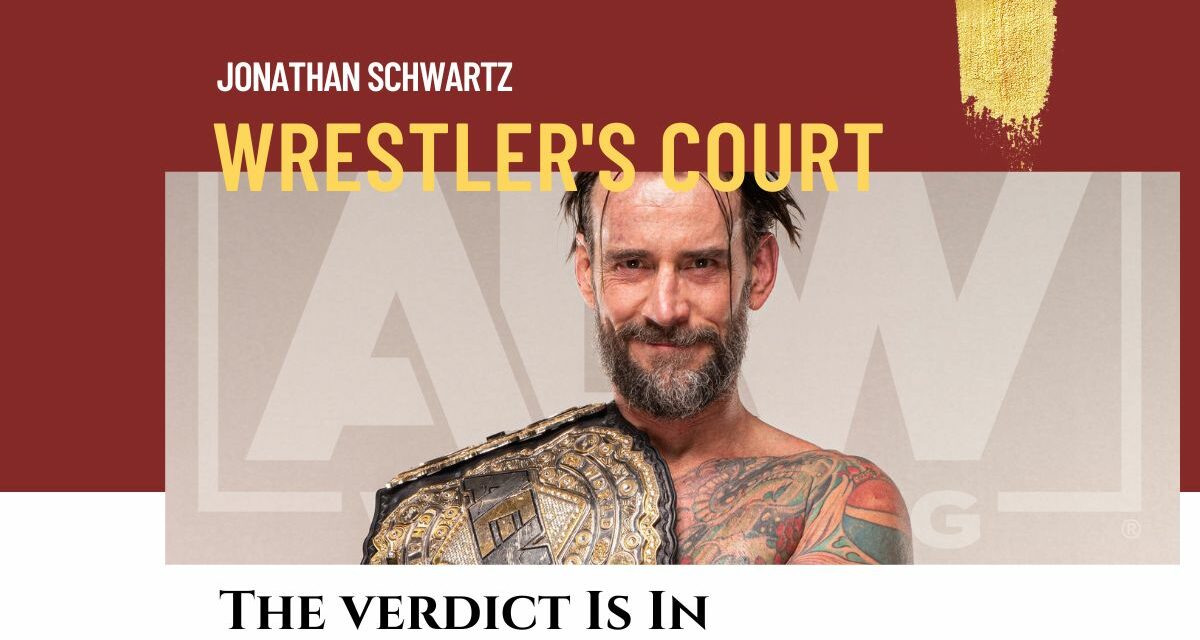 On May 29, AEW held its fourth annual Double or Nothing pay-per-view.

It was an action-packed card with a bit of everything for die-hard fans. From MJF getting his brutal comeuppance at the hands of a newly-emancipated Wardlow (not without its share of pre-card shenanigans), to a bloodbath of a match between a white-clad Jericho Appreciation Society and the confusing alliance between the Blackpool Combat Club (I’ll write about them later, if they last long enough) and a reconstituted Latin American Xchange complete with Eddie Kingston, to a pair of strong actual wrestling matches in the finals of the Owen Hart Cup — won by real life couple Dr. Britt Baker and Adam Cole (Bay Bay).

If you managed to stay up past your bedtime, you also witnessed a hard-fought main event between challenger CM Punk and AEW Champion “Hangman” Adam Page.

I hope I’m not spoiling anything but Punk won after a moment’s indecision by Page, refusing to take the low road and hit Punk with the title belt as a means of securing victory (because as we all know plated base metal is lethal when applied to wrestlers’ foreheads).

Some welcome this change, arguing that Page’s reign had long since grown stale despite solid feuds against the likes of Kenny Omega, Bryan Danielson, Adam Cole and Lance Archer.

I would agree that the rap against Page as a long term (by current standards) champion is that while Page is a strong in-ring performer, he never quite seemed to connect with the audience as a pure good guy should.

While Page faced an awesome rogues gallery of heels with the exception of Archer, who hadn’t been positioned as a serious title threat in AEW since he lost to Cody Rhodes when Rhodes became the first TNT champion, he rarely fought the kind of world-beating odds that make a good guy champion sympathetic.

Omega, Danielson and Cole are all excellent wrestlers who show much more personality on the microphone. They’re also on the small side if, like me, you’re conditioned on the Sasquatch-style giant heels that threatened babyface champs in pre-Attitude Era WWF. Page went into his title defenses on equal footing with his opponents when, if they wanted him as a long-term superstar, he needed to be at a disadvantage every time. 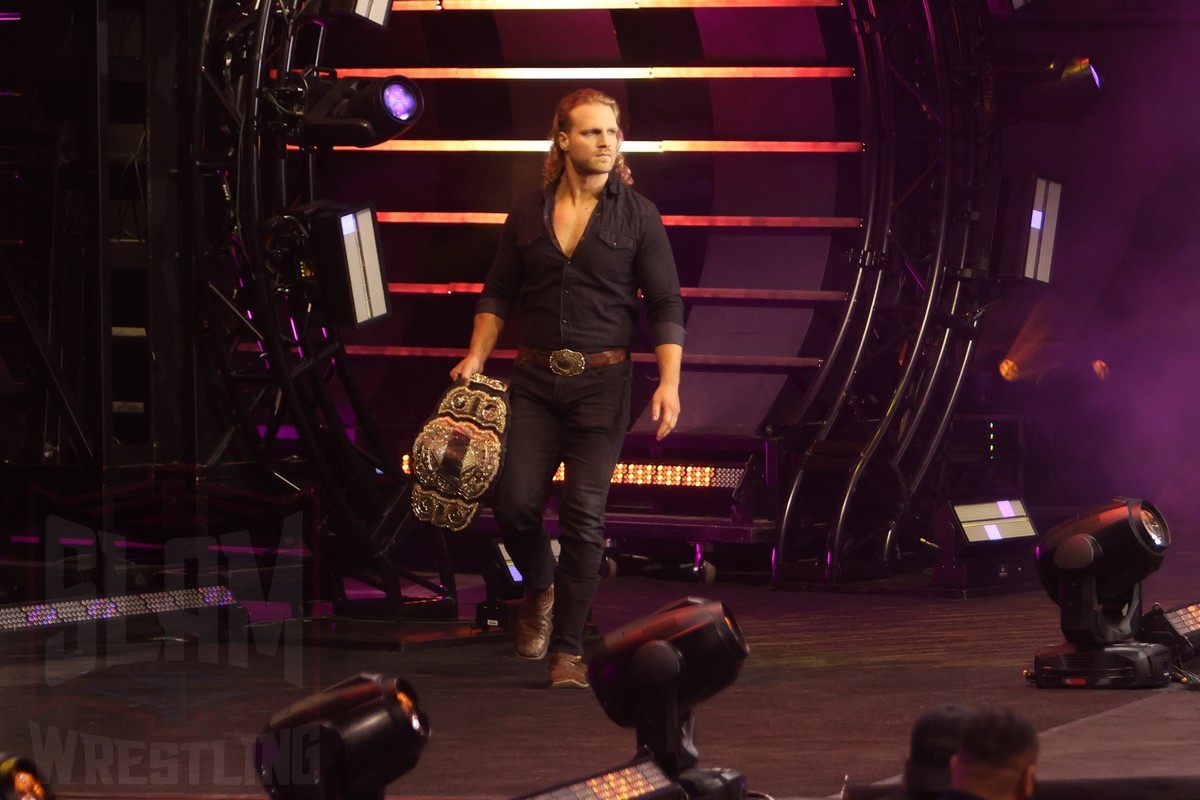 Adam Page arrives at the end of Lance Archer vs Frankie Kazarian at AEW Dynamite, at the Walter E. Washington Convention Center in Washington, DC, on Wednesday, January 19, 2022. Photo by George Tahinos, https://georgetahinos.smugmug.com

To make matters less interesting, Page was quickly turned heel in advance of his loss to Punk. Punk is white hot with audiences since his return to wrestling, but the sudden shift in Page’s character lost my attention. It was redundant. Just a few months ago Bryan Danielson was given the same treatment after receiving a hero’s welcome versus then-champ Kenny Omega, only to break bad in order to facilitate his series with new titlist Page.

These sudden turns try to force rivalries where none exist, because in basic storytelling terms you need a hero and a villain. But the best villains aren’t irrational or merely opportunistic. They have a clearly defined world view and most often see themselves as the heroes of their story, even as the audience disagrees.

AEW knows how to create these villains. MJF’s near-insane breakdown in his feud with CM Punk earlier this spring was a classic example. Even better, it dared audiences to sympathize with MJF, especially as he rooted his story in his childhood experiences of racism, bullying and anti-Semitism. Considering how AEW pitches to a more mature, progressive segment of wrestling fandom, booing MJF almost felt wrong until he beat Punk to a bloody pulp a week later to help set up a vicious dog collar match… and even then, MJF emerged at least slightly sympathetic and more rounded — his persona today being the result of his twisted love of this business, rather than the usual “gotcha” kind of ruse that makes wrestling look soap-opera silly. (Which is a shame for the business if the relationship between MJF and AEW is truly broken.)

All of which is to say, Page’s part in this main event wound up feeling like more of an afterthought than it should. And I haven’t even gotten to Punk in earnest.

If you’ve read my previous columns, you know that I’m a huge CM Punk fan. His work as the “Voice of the Voiceless” and infamous “pipe bomb” promo were probably the last time my winking conviction in kayfabe was shaken. Even better, he backed his awesome promo skills up with solid wrestling against a truly diverse group of bad guys. Punk’s reign in WWE marked the last time I was truly invested, and alongside the “Yes” movement a few years later, likely closes the era where someone from my cohort could be considered a champion in his or her prime. The X’s on Punk’s wrist tape may signify his straight edge status, but I think to my segment of the audience they carried his and my generation into battle.

I was bummed when he lost the belt to hotshot a returning Rock to a WrestleMania main event, and disappointed when he wound up leaving WWE acrimoniously. While I hoped to see him perform again under better circumstances, events like his ill-fated UFC venture, lawsuit against former friend Colt Cabana, and intermittent appearances of Fox’s Smackdown after show took a bit of the bloom off the rose.

I’ll have more to say about Punk’s AEW comeback in another column, but the short version is that it worked great, to a point. Punk can still cut one of the best promos in the game and more than holds his own in a company filled with strong talkers. He has worked with younger and more established talent, and generally gets them over even when he’s booked to win.

But at this stage, he wins improbably often for someone who spent seven years away from wrestling altogether. Feeding Punk a series of lower card younger talent made sense; just sharing the ring with him helps build them up. Matches against older wrestlers like Dustin Rhodes have their own appeal, but Rhodes is far removed from any title picture, so he can’t be hurt by a loss (and their recent match on Dynamite was more Bret Hart Easter Egg fest than anything). The same goes for a fun technical match against Dax Harwood, who isn’t leaving his successful FTR tag team any time soon. 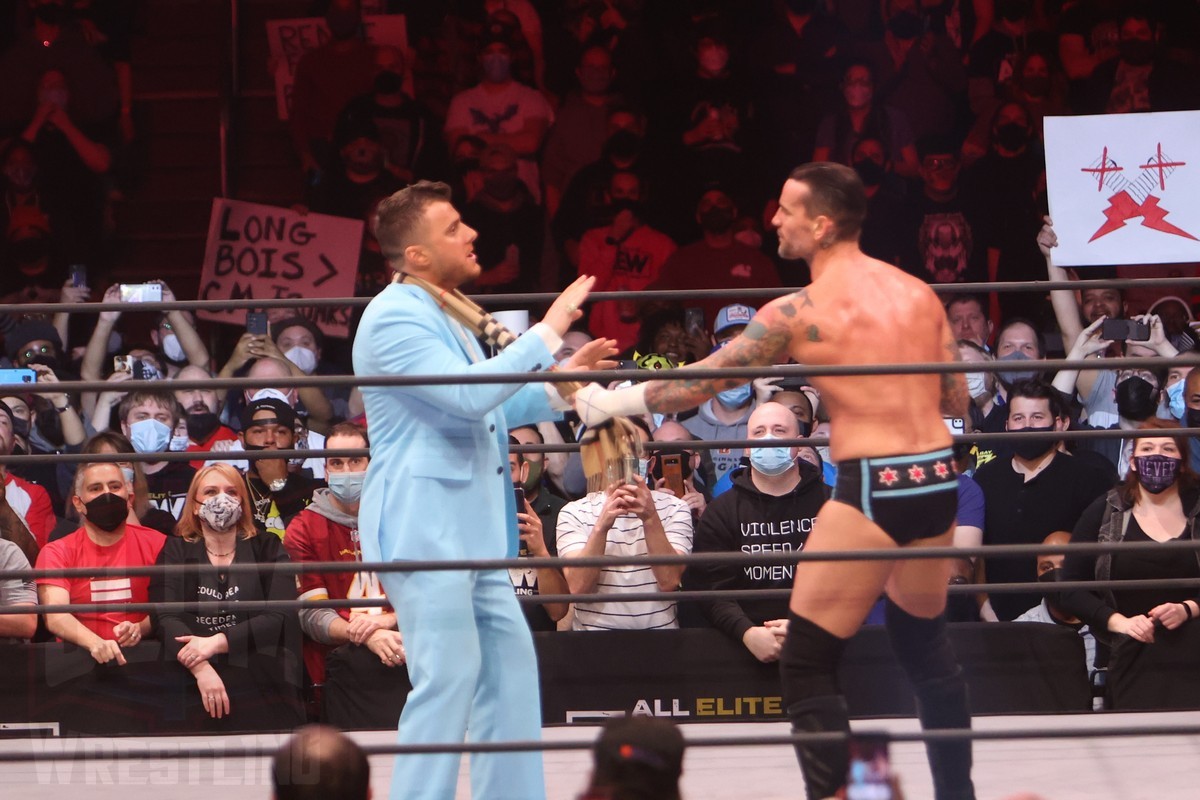 But in my opinion Punk versus MJF went the wrong way, privileging a 43-year-old on borrowed ring time over his heir apparent. While it did set up Punk’s victory against Page, that too seems like something we’ve seen before.

Page is 30 years old, and barring injury, loss of interest or catastrophic booking (any of which can and do happen), he should have plenty more title runs in him. Page is building his legend — he didn’t just need to be in the ring with Punk, he needed to silence the Voice of the Voiceless, at least for one night. A victory would have meant something to enhance a lackluster title run; instead it just feels like for the moment AEW has given up on Page. I won’t draw comparisons to late-stage WCW since Punk and other older stars can still work circles around that promotion’s main event scene, but it does feel like AEW is passing up the opportunity to build and sustain new talent.

The real question for any wrestling fan is always, with apologies to Goldberg, “Who’s next?” AEW needs to figure this out. With its recent acquisition of ROH, there’s a spot for both men, who are alumni. Page might benefit from a change of scene, especially to a venue that places more emphasis on the in-ring than the on-mic. He could also cement his apparent wavering heel turn and sign on with a manager (which makes me think of Ronnie Garvin after his footnote of an NWA title reign), or rejoin the Elite, or find solace among the Dark Order. None of these options feel quite right, though, and after three years with AEW, Page has run through most of the roster. A Cowboy member of Blackpool Combat Club might be interesting, and would pair Page with some of his best rivals and expose him to great promo work — but BCC is still poorly defined and I can’t tell whether they’re meant to be faces, heels or something in between. Right now they feel like a holding pen for unique talents that AEW just can’t figure out… and Wheeler Yuta, until they paint his face, give him green mist and call him “The Great Yuta.”

Punk as champion poses similar problems; winning the title from another babyface, the bigger story should be his yearlong redemption from exile. But what kind of title reign will satisfy audiences? Punk’s greatest WWE run lasted 400 plus days, which presaged longer runs by Brock Lesnar and now Roman Reigns, but both of those champions had the benefit of multiple active brands under the same umbrella. Until this past WrestleMania, if you were bored with Reigns you could follow the WWE Championship from Drew McIntyre to the Miz to Lashley to, well, Lesnar. And who will emerge as a viable contender, good guy or bad? Punk can definitely still wrestle a compelling match but has unavoidably lost a step or two. For a promotion that emphasizes action, he becomes a riskier proposition as champion, and at some point is as likely to need to be helped through a match as he once carried others. He is also for the most part unaligned in an environment where top to bottom the card is filled with teams and stables and alliances. What gives Punk the best chance at building solid, AEW-carrying momentum?

My hope? Enter the House of Black. 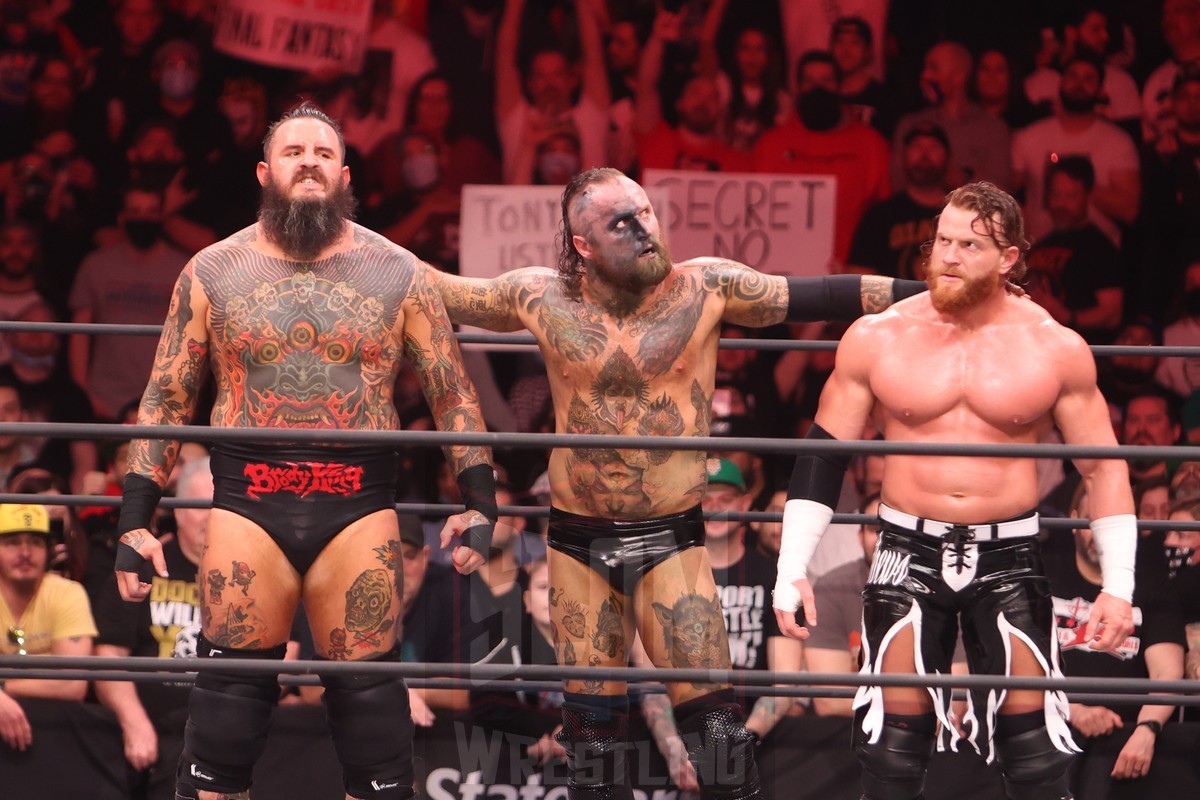 The House of Black is now Brody King, Malakai Black and Buddy Matthews at AEW Dynamite, at the Webster Bank Arena, in Bridgeport, CT, on Wednesday, February 23, 2022. Photo by George Tahinos, https://georgetahinos.smugmug.com