Impact: The multiverse of matches is the next stop 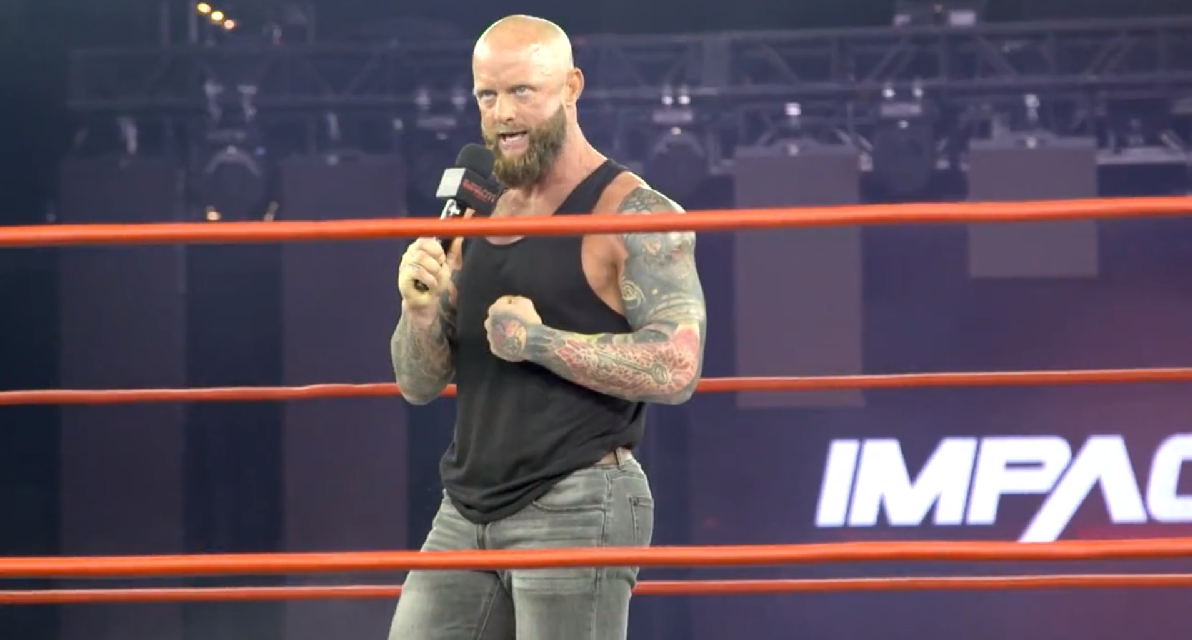 The show starts with a detailed recap of the excellent Moose and Josh Alexander story. The story includes Contract signing, home visits, Indy wrestling spears and so much more. A recap of the Spear from Destiny Wrestling was shown which was a nice touch. For the record, Moose speared Josh Alexander’s wife and went running while Alexander was left tending to his wifes side. We then catch up where Alexander and D’Amore are chatting. D’Amore says that he sent Moose home and he is thinking of stripping him of the title. At the end of the day, Alexander doesn’t care as long as he is the one that beats Moose for the Impact world championship.

The Impact opening video played… Tom Hannifan and Matthew Rehwoldt were on commentary, and David Penzer was the ring announcer

Jonathan Gresham is the first one to come out and its time for a promo. Gresham says that he wants to show Impact what a real wrestler looks like essentially. He mentioned Samoa Joe, Bryan Danielson, CM Punk and Eddie Edwards. Gresham said Edwards is no longer the man he was back then because he represents something different. All of a sudden, Kenny King comes out to share some words with one of the ROH world champions. King told Gresham that he (Gresham) is a puppet and a stooge for ROH. He said Gresham is being used to bring prestige for their company. King said Gresham is called The Octopus because he’s all arms and no brains or balls. Gresham said he didn’t want Pure Rules or “that worthless piece of metal from a dead company.” King said he wanted to pound Gresham into the dirt…

King set up for his finisher, but he sold left knee pain which Gresham was working on all match. King caught Gresham in an inside cradle for a two count. When both men stood up, King acted like his knee gave out. Gresham put him in a leg lock submission hold. The referee counted King’s shoulders on the mat, but he left his shoulders multiple times. Gresham maintained the hold as he stood up and Gresham was unable to get his shoulder up.

Eddie Edwards ran out and attacked Gresham. Rocky Romero came out and helped Gresham clear Edwards and King from the ring

The broadcast team ran through the Impact Multiverse of Matches show that will take place on Saturday in Dallas, Texas and is available for purchase via FITE TV

“The Motor City Machine Guns” Alex Shelley and Chris Sabin were interviewed by Gia Miller.  The topic of discussion was their rematch with Jay White and Chris Bey. Sabin made mention of facing Tomohiro Ishii at the Multiverse of Matches show before closing with a line about facing White and Bey. This promo was your typical “we will beat them” type promo.

Check out what the Motor City Machine Guns have to say before they go head to head with Bullet Club tonight!@SuperChrisSabin @fakekinkade #IMPACTonAXSTV pic.twitter.com/zhm2fBhkH0

Deonna Purrazzo was interviewed by Gia Miller and she essentially said that she is the Multiverse.

Johnny Swinger and Zicky Dice made their entrance for the “chump chump challenge.” Swinger said Dice is a good kid and he’ll be the next Adrian Adonis if he listens to him

This match was pretty much exactly what you would expect, and by that I mean a squash. . Gallows splashed Dice in the corner and put him down with a kick. Anderson tagged in. Anderson and Gallows hit the Magic Killer before Anderson pinned Dice

After the match they were interviewed by Gia Miller in the back and they said that they are going back to their roots which is beating people up. They then promote the match against the Briscoes at the Multiverse of Matches.

We then cut to PCO and Jonah. PCO is screaming for Jonah in the parking lot.  Jonah powerbombed PCO and told him to stay down. Jonah picked up PCO anyway and punched him, then jabbed him with a sledgehammer. Jonah placed what appeared to be a concrete slab on top of PCO and then slammed the sledgehammer onto it. PCO then was able to get enough energy to gran Jonah by the throat and slammed his head on his own damn car!

Alexander suplexed and powerbombed Fulton, then put him in an ankle lock. Fulton tried to hold on for a bit, but he eventually tapped out. Once again, the match was not tooooo long. Some would say that this was a squash in order to put over Alexander.

Alexander held the hold while the referee pleaded with him. Alexander released the hold and caught Ace Austin sneaking into the ring, but Austin froze and then opted against entering the ring. Fulton hit Alexander while he was distracted. Alexander took Fulton down and reapplied the ankle lock, then wrenched on his foot. Austin watched from the stage and headed to the back…

Trey Miguel asked Mike Bailey about his relationship with Ace Austin. “Ace is Ace,” Bailey said. Miguel pointed out that Austin just stood and watched his only other friend get his ankle broken. Miguel told him not to expect Austin to have his back. Bailey said he always expects the unexpected

James said it’s not about who the power couple, it’s going to be a real ass whipping because Chelsea Green clearly hasn’t had enough of them. James said it will be “the Mid-Cardonas against Al-dis”

Gia Miller knocked on the locker room door of Cardona and Green. Cardona opened the door and was asked if he had an explanation for Green’s actions when she attacked Mickie James last week. Cardona took offense that Miller didn’t ask about his “historic reign” as the Digital Media Champion. Cardona called for Green, who said she will be getting her shot at James. Cardona said he and Green will face James and Nick Aldis at the Multiverse of Matches and will prove why they’re the power couple of pro wrestling

Match 4 : Knockouts Battle Royal for a shot at the Knockouts Championship

Entrants included Evans, Lady Frost, Rosemary, Giselle Shaw, Alisha Edwards, Havok, Madison Rayne, Tenille Dashwood, Jessie McKay, and Jordynne Grace. Havok was eliminated by a huge group of women to put her over.  Kaleb caught McKay and saved her from elimination while his own team of Dashwood and Rayne were eliminated. Grace and Evans had a big showdown. Evans got the better of it and set Grace on the apron, then hit her with a big boot that eliminated her. Rosemary and Frost ended up on the apron. Shaw tried to eliminate both of them, but Rosemary and Frost grabbed Shaw and pulled her over the top rope, which led to Frost also falling off the apron, leaving Rosemary as the winner.

A Violent By Design video aired with Eric Young talking while Joe Doering and Deaner stood behind him. Young said they would take back their power and control and what Deaner lost

Prince tried to leave, but Gujjar stopped him and worked him over at ringside. Back in the ring, Gujjar slammed Prince and got a near fall. Prince got some offense,, but Gujjar eventually put him away with a spear from the middle rope.

Myers started heading toward the back, but W Morrissey came out and attacked him. Morrissey ran Myers into the ring post. The crowd called for tables. Morrissey set up for a powerbomb, but Myers grabbed the foot of Aiden Prince, who was still down at ringside. Myers escaped and ran to the stage. Prince shoved Morrissey, who responded by powerbombing him through Myers’ broadcast table

Yet another squash on this show! Slamovich  was hit a few times but she came right back with a suplex and went on to win the match with a Snow Plow.

White tossed Sabin to the floor right beside Shelley, and then Bey went for a flip dive onto them. Bey laid on top of Sabin and held up the “too sweet” sign (as he should). Bey sent Sabin back inside the ring where White suplexed him. Bey performed a top rope splash and had the pin, but Shelley broke up the pin.

White barked at the referee even though it wasn’t even close this time around. Sabin rolled up Bey and got a visual pinfall while the referee was caught up with White. A short time later, Sabin avoided Bey going for his finisher. Sabin set up for Cradle Shock, but White returned and dropped Sabin with a wicked suplex. Bey performed a springboard cutter on Sabin and scored the pin.

The show ended with the celebration of the Bullet Club.

This episode featured way too many squashes and essentially felt like a set up to their Multiverse of Matches event. This wasn’t a bad show but not what we have come to expect from Impact in 2022.