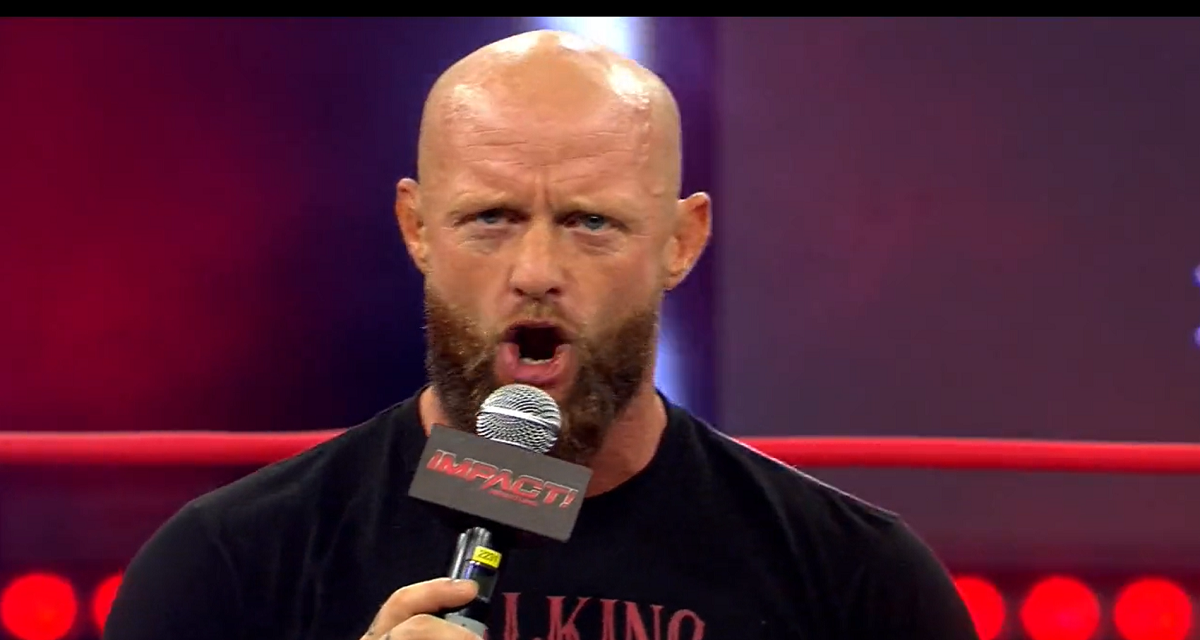 Greetings and Salutations! Bob is away for a few weeks so I’ll be handling the Impact coverage while he gets some time off. We are just days removed from Sacrifice and firmly all eyes are on Rebellion being held April 23, 2022. This week is sure to be a good one as we begin to get the lay of the land as we head into our next PPV. Without further ado, let’s get to it.

The show kicked off with Tom Hannifan and Matt Rehwoldt welcoming us to the show. Josh Alexander makes his first appearance since returning at Sacrifice and walks down the entrance ramp. Josh got into the ring and grabbed a mic. Josh started his promo by saying that while he was thinking about his next move, his son Lucas would ask him when he was going to beat Moose. Alexander then said that on April 23 that will happen and he would become a two-time IMPACT World Champion at Rebellion.

Could we be looking at our new IMPACT World Champion?!@Walking_Weapon#IMPACTonAXSTV pic.twitter.com/00FvR30xy6

Eddie Edwards came out and said that Josh Alexander has had everything handed to him. Alexander then tells Edwards not to mention his son’s name (Lucas) again.

This is not @TheEddieEdwards we knew and loved! #IMPACTonAXSTV pic.twitter.com/gUPJ0XZbjA

Matt Taven, from Honor No More interrupts and asked Alexander who the hell he is. He then listed all of the championships he and Edwards have won. Taven then said that the main difference between Alexander and them is that their title reigns never ended in front of their families. Alexander then comes back saying that at least his title reign never put a company out of business. The rest of Honor No More comes out and Alexander challenges all of them. Honor No More attacked Alexander. Team IMPACT came out for the save. Scott D’Amore came out and said that Eddie Edwards will face Rich Swann later on the show and Willie Mack will take on Kenny King…After the BREAK! D’Amore then told everyone else from Team Impact and Honor No More that they were barred from ringside.

Mack started with the early advantage in the match but King raked Mack’s eyes to get some of the momentum back. Mack hit King with a slam and went for his standing Moonsault but King rolled out of it and applied a Camel Clutch on Mack, who was able to use his brute strength to get out of the hold. After some back and forth Mack hit the Stunner and six-star frog splash for the win.

Moose is with IMPACT EVP Scott D’Amore. D’Amore has the contract for the match between he and Josh Alexander for the Championship at Rebellion. D’Amore said that Alexander has already signed the contract so now Moose has to sign it or be stripped of the World Title.

Trey Miguel joined the commentary desk for the front row view of this match. It was noted that the winner of this match would face Trey Miguel at Rebellion on April 23. Austin tried to become friends and have an alliance with Skyler was smarter than that and took out Auston. Steve had the early momentum in the match but his opponents all regrouped on the outside of the ring.

After some time, Austin gained control of the match over both men but Austin was taken out. Skyler hit a Tiger Bomb for a two-count but couldn’t keep up with the momentum he had going for him. Austin hit a spinning-kick on Skyler, then Austin put Steve pn the top rope looking for a super plex but Steve knocked Austin off the top. Skyler controlled the match for a bit and and hit a power-bomb on Steve, Austin then off the top turnbuckle with a Blockbuster on Steve while Skyler was down. Austin pinned Steve and got the three-count to become the X-Division number one contender.

Gia Miller is with Bhupinder Gujjar. Gujjar said that he has earned and worked hard for everything he has in his life. He said he wanted to keep his winning streak going into a title match. Raj Singh then approached him and asked why he’s been ignoring him. Larry D suddenly appeared and complained that there is no space for him right now in IMPACT. D punched Singh and got in Gujjar’s face to end the segment.

Lee and Evans started the match. After a short amount of time, McKay came into the ring to allow Lee and McKay double-team Evans. After some back and forth, Savannah hit a Samoan drop on Cassie and followed it up with a leg drop. Savannah went for the cover but it was only good for a two.

Evans tagged Steelz into the match and the new IMPACT Knockouts Champion got to worl. James hit a sneaky shot on Steelz. Kaleb tried to hit Green off the apron but was kicked in the gonads for his efforts. The match completely went nuts and there were several disctractions at once. This allowed James to hit the Mick-DT on Steelz to get the 3 count and the win for her team.

Winner: James, Green and The IInspiration

Huge MickDT from @MickieJames on #IMPACTonAXSTV!

Bullet Club (Jay White, Good Brothers, and Chris Bey) were out to address the IMPACT faithful. Jay White talked about beating Alex Shelley at Sacrifice to further cement the fact that he is the best wrestler in the world.

This prompted Shelley to come out and he did accept the fact that he lost the match and thought he was immune to White’s bragging and disrespect but that wasn’t the fact. Bey got on the mic and and asked Shelley how he likes being a loner? Shelley reminded the Bullet Club that he is neevr alone. Sabin came out to the stage and eventually a match between the reunited Motor City Machine Guns and Bullet Club members, White and Bey, was made official for next week on IMPACT TV.

Backstage, Alexander was telling D’Amore that it should be him facing Edwards later on the show. D’Amore told Alexander that he wanted him to focus on the his World Title match at Rebellion BUT if he really wanted a match he can face Taven next week.

Gia Miller is with Deonna Purrazzo. Miller asked Purrazzo if she felt bad about re-injuring Chelsea Greene’s arm. Purrazzo said that she did feel bad for a second but that won’t happen again (felling bad). Purrazzo said that anyone who challengers her will suffer.

Gisele Shaw and Lady Frost appear to confront Purrazzo. After words were said, Purrazzo put both titles on the line net week against both of them if they would shut up.

It was also announced for next week:

Two former Impact world champions squared off in the main event of Thursday’s show as Honor No More’s Eddie Edwards met Rich Swann. Edwards as in firm control through the entire match.

The match goes to the outside and on the apron. Swann gave Edwards an amazing head sciccors on the outside of the ring. Swann caught Edwards with a leaping rana but was only able to get a two-count.

After coming off a strong Impact Plus special, Impact TV came roaring with a very strong showing. We have a few HUGE matches set up for next week as we see Josh Alexander facing Matt Taven and The Motor City Machine Guns vs Bullet Club.

This show had some fun in-ring and we are already seeing what the next championship programs likely will be. After a very dominant performance, it appears that Eddie Edwards will challenge the winner of the Moose/Alexander program.

This show seemed short but was very well paced and set up some fun stories. Onto next week!