AEW Dynamite: One championship changes hands, and a TBS Champion is crowned 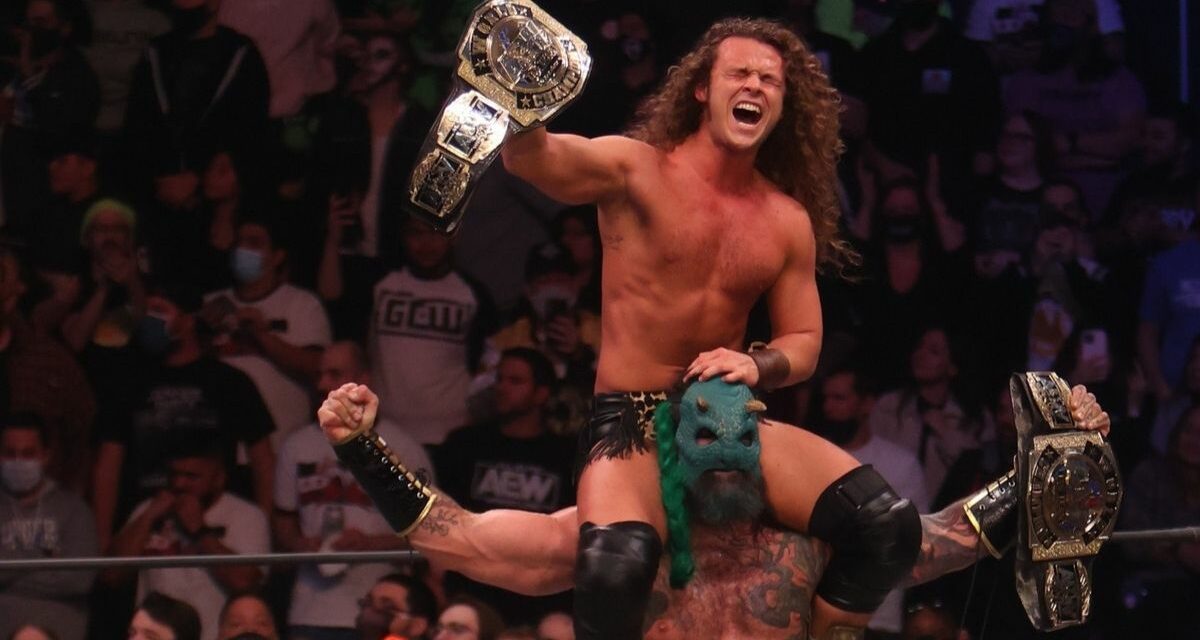 When one era ends, another inevitably begins. In this case, the old era was AEW Dynamite on TNT, while the new era is AEW Dynamite on TBS. Or in other words, broke: TNT, woke: TBS. Or something like that. As AEW is wont to do, this debut broadcast on a new (to this series, certainly not to pro wrestling) network has been loaded up, so let’s not waste any time, because the AEW World Championship is up for grabs from Newark to kick off this show.

Your judges at ringside tonight are Mark Henry, Jerry Lynn and Paul Wight, and if you are uncertain as to why they are there, you must have missed the first title match between these two competitors. The deal is that if this bout goes to the 60-minute time limit, there can be no draw as there was a few weeks ago, as the judges will render a decision. Is there 10-point must scoring? Great question! In any case, Danielson appears to be playing for exactly that early on, avoiding direct conflict and stalling wherever possible, then turning his focus to Page’s shoulder in hopes of preventing a Buckshot lariat later on. About 10 minutes in, the announcers are debating about who has the edge if the match went to the cards right now. Nice, except it’ll be another 50 minutes until we have to worry about that. Oh, also, Page has been busted open, so there’s that. Being smashed face first into the post on the outside probably won’t help either. The fans like what they are seeing, though, shouting out the “this is awesome” chant. The champ treats everyone to some jumping jacks after sending Danielson back out to the floor, but all I can hear in my head is the “I Can Do This All Day” song from Rogers: The Musical in my head. Hey, if you know, you know. After a second commercial break, Danielson is also bloody, and Page hits him with a Deadeye on the floor. That sets up a very meme-able moment as a wild-eyed, blood-stained Page looks for the Buckshot from the apron, but Danielson avoids it and gets his submission game going. Back and forth we go as Page connects on a top turnbuckle moonsault to the floor, and Danielson responds with a running knee shot in the ring. Hot damn, they’re doing it again. A few minutes later, the elbow pad comes off for Page, and that means he’s not missing. His Buckshot flips Danielson head over heels, and Hangman covers for the three. Giving him a clean win, and particularly making the Buckshot look so strong, are good things, in this humble writer’s opinion. Well played. 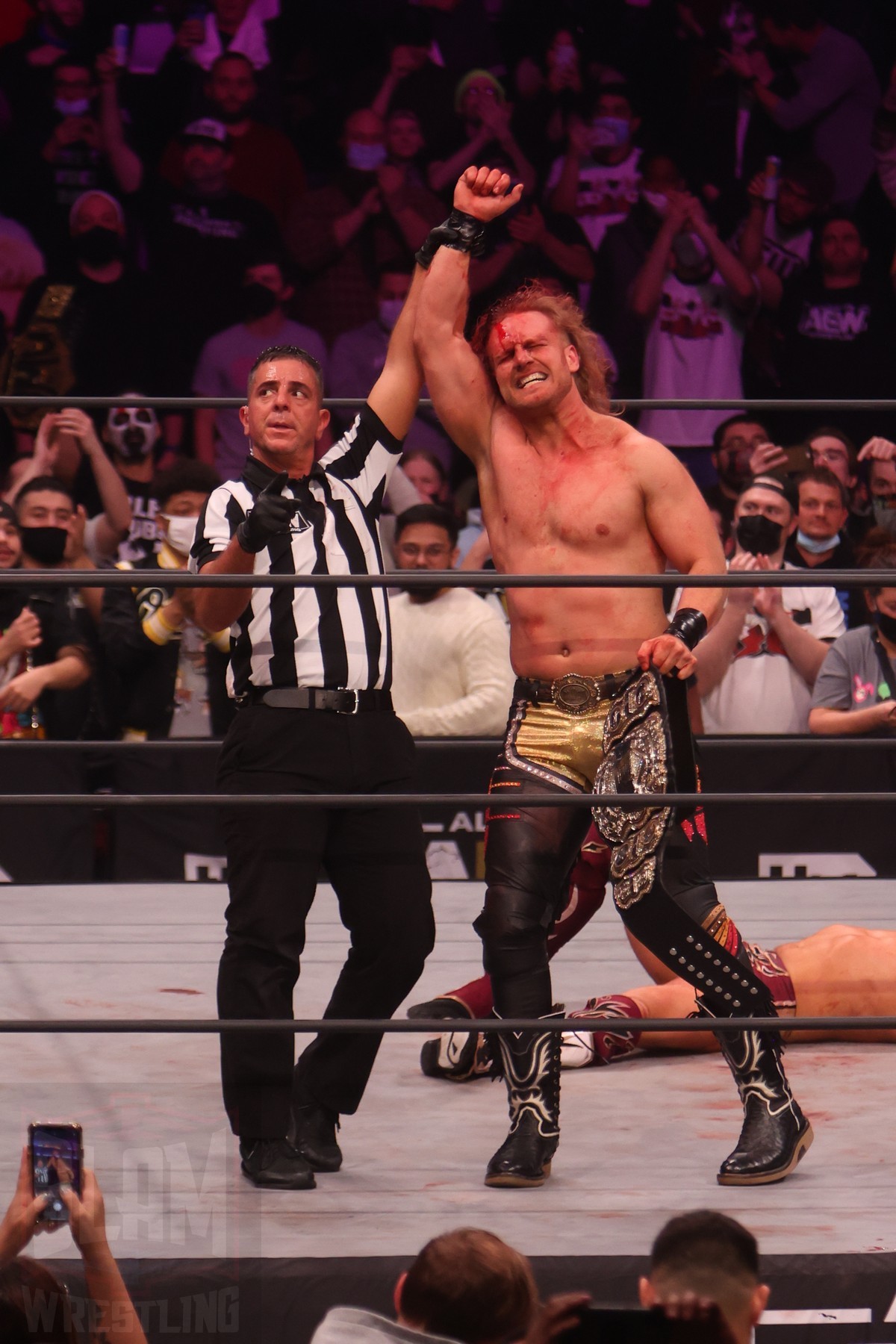 Adam Page retains his AEW World title at AEW Dynamite, at the Prudential Center in Newark, NJ, on Wednesday, January 5, 2022. Photo by George Tahinos, https://georgetahinos.smugmug.com MORE PHOTOS IN THE GALLERY!

The Acclaimed still has beef with Sting and Darby Allin’s “Nightmare Before Christmas-looking ass.” To reinforce the generation gap theme of their promo, they’re going to express their displeasure next week with a … viral video? I mean, I guess Roddy Piper may have done that if it was a thing back in the day.

The announcers accuse MJF of merely looking to pad his record, but he maybe doesn’t understand the assignment. Why? Well, he retreats to the floor when CM Punk arrives, but then Punk gives Dean the GTS. That means MJF loses by DQ, and Punk says it’s going to keep happening until they wrestle each other. MJF says it’s only because of him that Punk is relevant in 2022, and that it’s really him who is the savior people have been seeking. A lengthy back and forth includes MJF saying Punk can’t compare himself to Piper because Piper was actually talented enough to main event WrestleMania — and if he doesn’t get the respect he deserves, MJF quips that he might go main event Mania himself. But all Punk wants to do is kick MJF’s ass, so he encourages MJF to leave if he thinks the grass is greener elsewhere, because an ass kicking will still be waiting when he returns. Heh. It appears MJF may have been pushed into relenting, but he instead says that next week, Punk will have to face Wardlow. Punk is OK with that, noting that like Piper, he’ll fight anyone, anywhere, and eventually, MJF will run out of people to hide behind. This is fun, let’s keep this going, please. 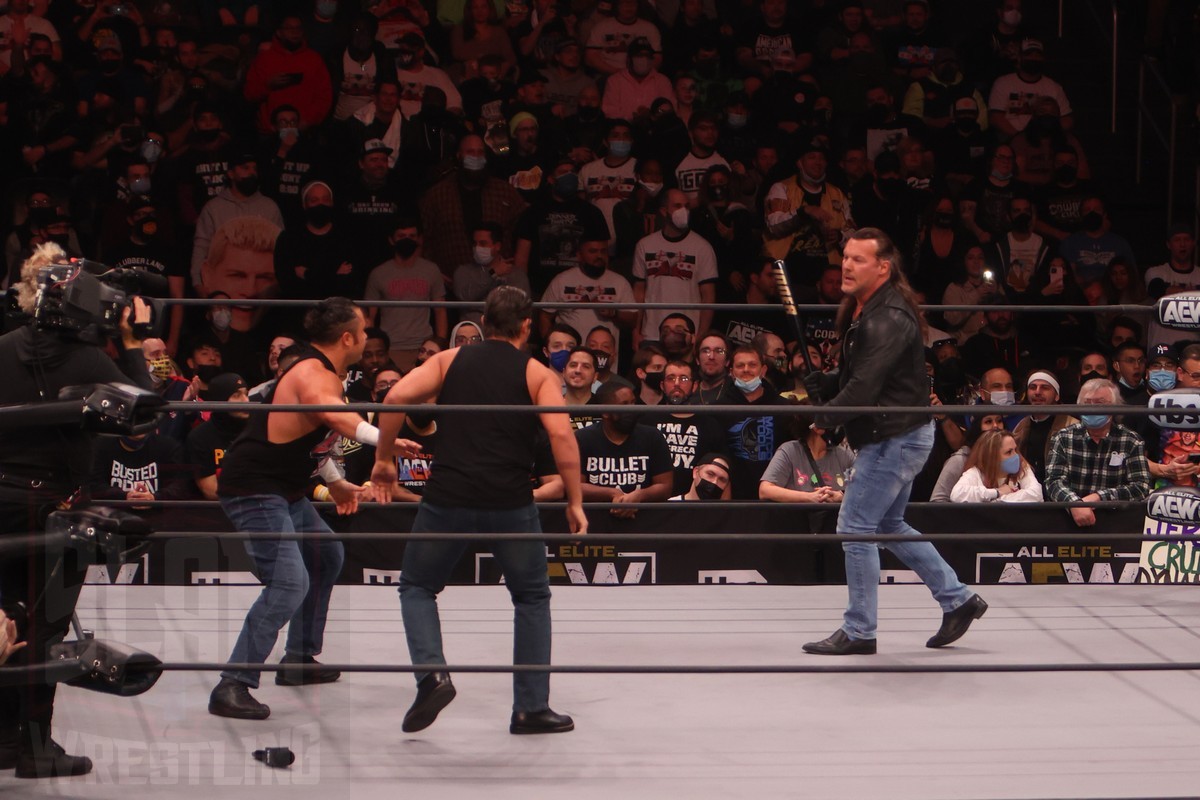 Chris Jericho gets ready for baseball season against 2.0 at AEW Dynamite, at the Prudential Center in Newark, NJ, on Wednesday, January 5, 2022. Photo by George Tahinos, https://georgetahinos.smugmug.com MORE PHOTOS IN THE GALLERY!

That last segment is a hard act to follow, but if someone can, it’s Chris Jericho. He clarifies that he didn’t do what he did last week to help Eddie Kingston, but rather to get some payback on 2.0. Speak of the devils, Scott Parker and Shane Matthews come out to taunt Le Champion only to run flat into Squarehead and Pinhead barbs. Jericho also has Floyd by his side, but 2.0 has Daniel Garcia. The numbers are firmly against Jericho, but Kingston, Santana and Ortiz quickly change that, and the heels scatter.

Adam Cole says last week was awesome, and that he knows Kyle O’Reilly didn’t mean to kick him, but the Young Bucks did mean to help assure they would win. It sounds like Cole wants all five men to band together, and also wishes to teach new signee Jake Atlas a lesson next week.

While the ref is examining Wardlow’s ring gear, Shawn Spears hits a C4 on Zambrano on the floor. Spears wants him to cover right away, but Wardlow would rather powerbomb him repeatedly, as I would if I were in his large boots. When Wardlow eventually loses it and lets loose on the Pinnacle, that’s going to be an amazing face turn. 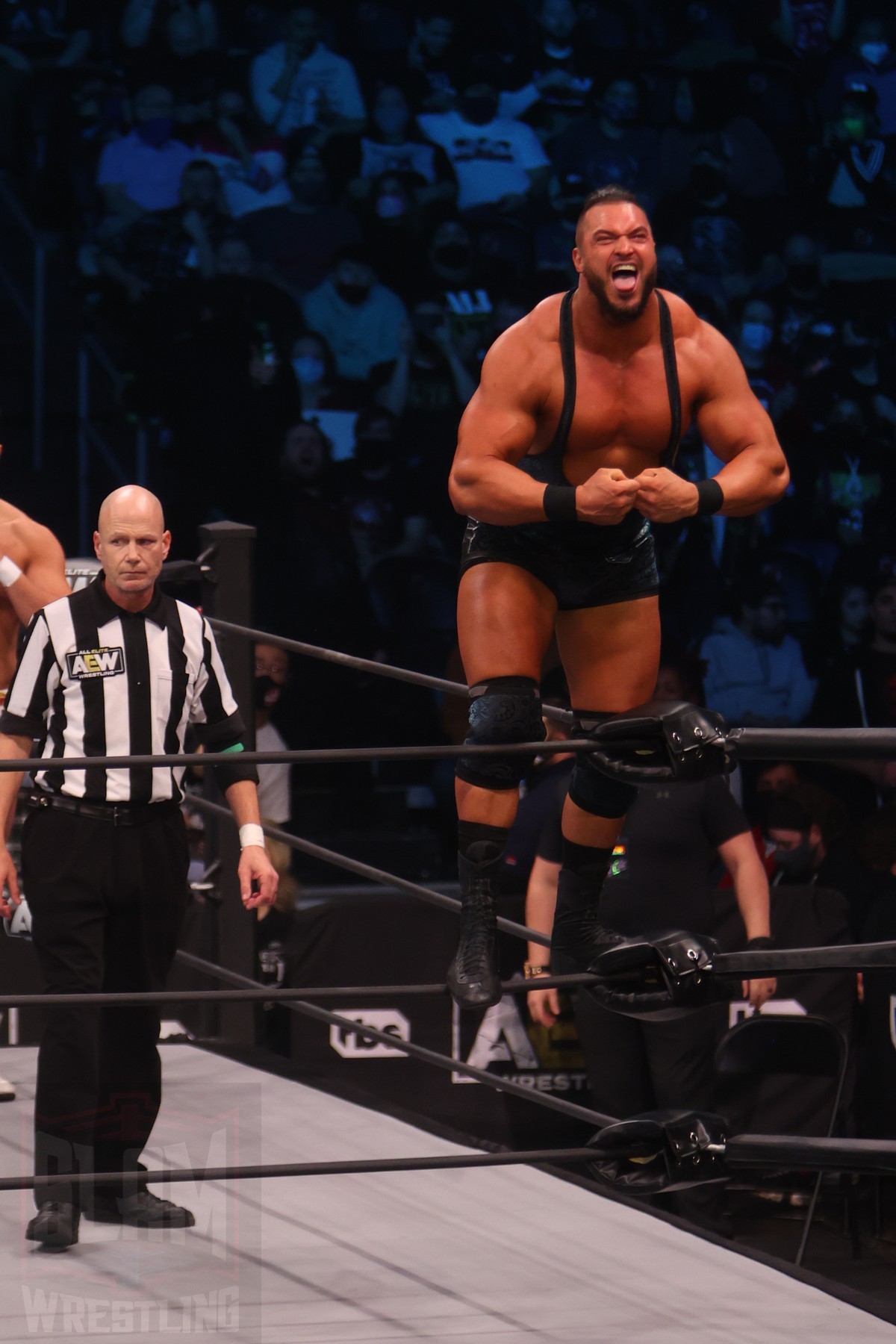 Wardlow’s posing lasted longer than his match with Antonio Zambrano at AEW Dynamite, at the Prudential Center in Newark, NJ, on Wednesday, January 5, 2022. Photo by George Tahinos, https://georgetahinos.smugmug.com MORE PHOTOS IN THE GALLERY!

Yo, Cargill’s entrance gear and hair make her look like Storm of the X-Men, and it is an awesome look. Despite Soho’s very real edge in experience, it’s easy to position her here as the underdog thanks to Cargill’s physique and undefeated record. Tony Schiavone and Jim Ross play up the idea that Cargill got a first round bye in this tourney, whereas Soho did not. Alas, Ruby hitting her finisher and not winning is not a good omen for her emerging with the belt. The end is thrilling if a bit awkward, with Cargill not quite executing a double underhook facebuster off the top, but it’s enough to get her the win and make her the inaugural TBS Champion.

Serena Deeb sits down with Jim Ross and admits that she wanted to wrestle civilized matches against Hikaru Shida, but she suffered some fluke victories which she won’t accept. Thus, it’s now her goal to hurt Shida, which motivated her to go to Tony Khan and demand another bout with her next week. 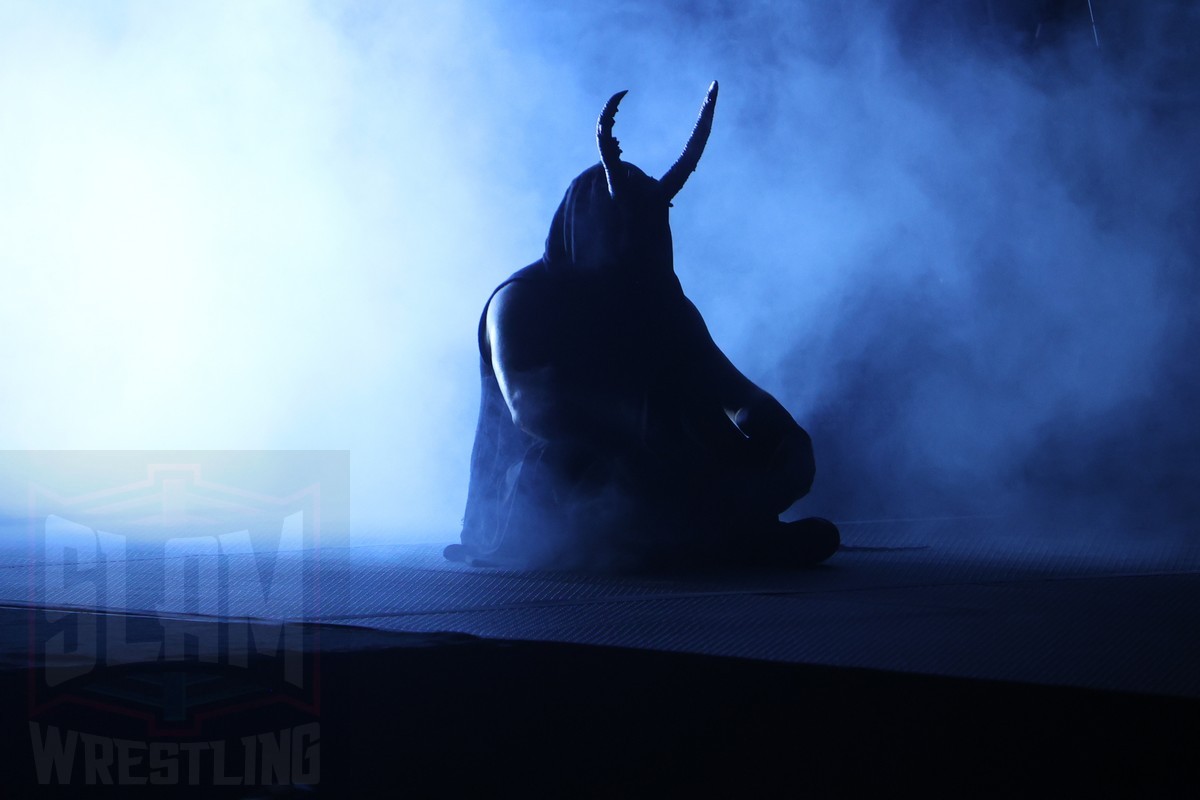 Malakai Black at AEW Dynamite, at the Prudential Center in Newark, NJ, on Wednesday, January 5, 2022. Photo by George Tahinos, https://georgetahinos.smugmug.com MORE PHOTOS IN THE GALLERY!

Hart sporting an eyepatch to sell the black mist attack by Black is a nice touch. The drama here is really about how good a showing Pillman is going to make, and he gives a good account of himself even though we know he’s doomed in the end. So Black has torn through this group, and returns to menace Hart after the bell. The Lucha Bros. remember what Black did to their brother in arms, Pac, but the lights go out as they approach the ring, and Black is safely on the ramp.

Soho’s interview with Schiavone is crashed by a cocky Britt Baker, though Ruby reminds the doctor that she’s never beaten Riho, with or without her goons. Baker responds to that provocation with violence, and an unusually fired up Riho comes flying in to join the fracas as well.

QT Marshall claims Hook learned everything he knows from him, and Hook’s Rampage opponent, Aaron Solow, steals a line from Taz, saying “Stretch me if you can, survive if I let you.”

I’m torn here. On one hand, the Lucha Bros. are probably my favorite tag team in any promotion today. On the other, it feels like it’s time for Jurassic Express to win the belts. Would I watch Jungle Boy and Rey Fenix wrestle each other every week for a few months? Yes, yes I would. Also, this is a pretty nice showcase for Luchasaurus too, with the announcers helping by putting him over. With about five minutes left in the broadcast, it’s just one high impact move after the other, but the lights go out and come back on just as the Lucha Bros’ look like they have things in hand. But no one comes out and everyone is accounted for, so … yeah. Jungle Boy gets hit by a combination Fear Factor and still manages to kick out. Alex Abrahantes wants his guys to put someone through a table, but the excitable one gets chased off by Christian Cage. The champs try to knock Luchasaurus off the apron through the table below, but he catches Fenix and chokeslams him through it instead. Penta and Jungle Boy end up in the ring alone, and Jungle Boy counters a Made in Japan attempt with a rollup to get the three count. Jungle Boy and Luchasaurus are champs for the first time in AEW, and they celebrate with Cage.

A handful of tag teams come to the stage, signifying that there will be plenty of people gunning for the new champs, while both Jericho and Black look on from seats in the crowd. That’s all for this week, see you in seven!

Well, if AEW wanted to make a big splash for the network change, mission accomplished, as this was a great card. Social media seemed split on whether leading with the Danielson-Page rematch was the way to go, but that saved a great scene for the end of the show as well. Good stuff from all involved and some memorable moments.