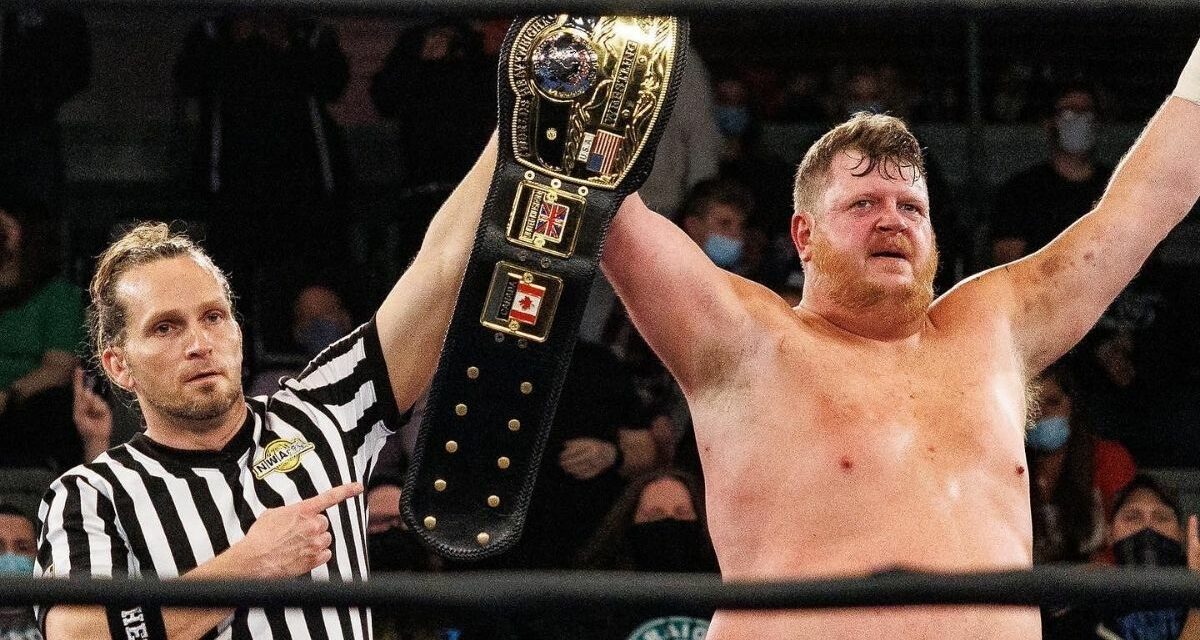 Trevor Murdoch won the NWA World title at the NWA 73rd pay-per-view on August 29, 2021, defeating Nick Aldis, and celebrating in the ring with his family in St. Louis, at the Khorassan Ballroom of the historic Chase Park Plaza.

When he got home, Murdoch savored the moment, and thought of Harley Race, his trainer and mentor. Race, who died in August 2019, was a seven-time NWA World champion.

“I laid it in bed, and I sat there, and I actually talked to it for about 15 minutes. I know everybody listening to this probably thinks I’m crazy, but that is the closest connection I have anymore to Harley,” Murdoch said, during rare down-time backstage at the Georgia Public Broadcasting center in Atlanta, where the NWA was shooting four days of television, December 3-6. “I miss that man tremendously, and I so wish he could see what I’m doing here, because of all the hard work and the effort he put in to me, this would have been a great payoff for him. So it’s very important for me to carry this championship as if he were, because I’m representing him.”

Getting a little emotional, Murdoch shared what he did next.

“A week later, when I went to his grave, and just put the title on his tombstone, and said, ‘Thank you.'” 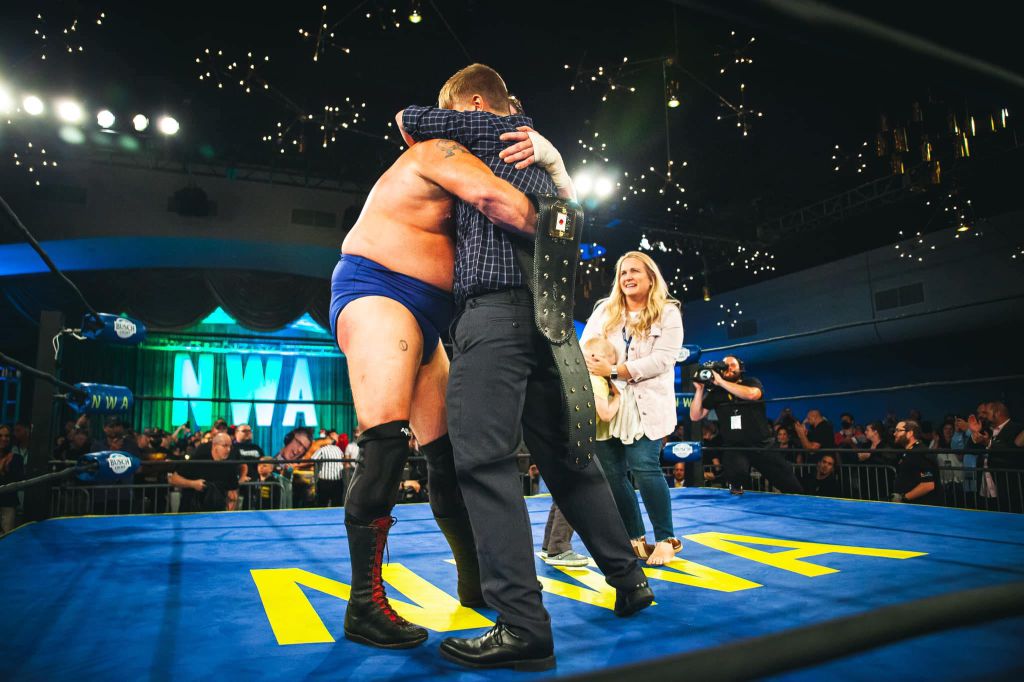 Trevor Murdoch enjoys a moment with his family after winning the NWA World title in St. Louis. NWA Photo

The story of Race and Murdoch (Bill Mueller) is intertwined, just as the story of the current incarnation of the National Wrestling Alliance, as run by Billy Corgan, is intertwined with Murdoch.

“I take a lot of pride in this company, especially from where I came from, to what I’m helping build here now,” said Murdoch. “I’ve been here for two and a half years, I was on the very first NWA Powerrr show. I’ve been here since the beginning. And I want to help make sure that after me, that this show is still continuing to move forward and still being a positive wrestling show, growing and getting bigger.”

The power of positivity carried on to the NWA locker room, where the vibe was collaborative, friendly, and frenzied at times.

“We all support each other, the company supports each other. Wrestling is not hard; it seems as if other companies have made it difficult. Here in the NWA, there is no picked ‘Chosen One.’ The people are what choose the guys, the people are what motivate us,” explained Murdoch. “I know in other companies, there’s a chief and he picks an individual, and that’s what everybody has to accept. It’s hard for the people to go about business that way. And I wasn’t picked, there wasn’t a long meeting around going, ‘Who’s the next guy?’ ‘You know what? We’re going to we’re gonna make a Trevor and we’re gonna force him down [throats].’ The people are the ones that willed me into this position. They had no choice but to give me an opportunity.”

Murdoch’s everyman persona is really him and it translates. He is more like the average fan than most wrestlers.

“I’ve got a mirror, so I know what I look like,” he laughed, trying to be subtle as he occasionally spat tobacco into an empty water bottle. “Throughout my whole career, there’s always been people that have made statements about the fact that I don’t look like everybody else. The thing is, back in the day, when wrestling was wrestling, nobody looked the same. That was the great thing about it, is you had a variety of people and variety of looks and styles. Do I look like the cookie cutter champion? No. Do I wrestle just as good as those guys? Yes. Do I hit just as hard as those guys? Yes. I check all the other boxes off, except the fact that I look different. And I’m okay with that. I’m okay with the fact that a guy that’s sitting out in the stands, a young kid saying, ‘I want to be a pro wrestler, but I don’t look like everybody there.’ I want him to be able to go, ‘Hey, there’s Trevor. He went out there, worked his ass off, got his opportunities, made the best of everything, and was rewarded for it. And now he’s got the ball and he’s running with it.’ I want to give those guys that motivation.”

It’s simple, said the champ. “Everybody thinks that you’ve got to be special — it’s all about hard work. Don’t give up. I know it sounds cliché, but it truly is how I’ve been successful, is I just didn’t give up.”

Murdoch went from beating Aldis — with Ric Flair stepping into the ring of offer his congratulations — into a feud with Mike Knox, and then Matt Cardona (the former Zack Ryder) arrived to insert himself into the title picture at Hard Times 2 on December 4.

It was a great moment seeing Cardona there — no one expected it.

“That’s the exciting part about pro wrestling. And I will be specific in this aspect — when you watch WWE, you don’t expect any huge surprises, because they have made it very well known that they always stay within their circle. It takes a little bit of the excitement and the element of surprise out of it,” said Murdoch. “Whereas with us, we’re an open company — you don’t know who’s going show up, and I think that’s the anticipation, the excitement of what could happen. I like that fact. I think it keeps the fans on their toes, it gives great payoffs and obviously great moments of, ‘Holy crap! I can’t believe this is happening!'”

Murdoch himself is open to bookings. 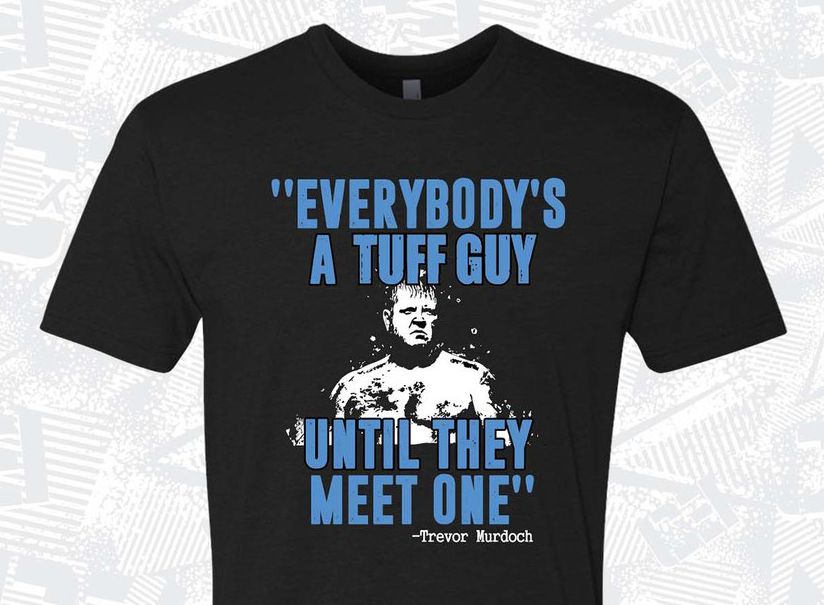 The Trevor Murdoch T-shirt available from Collar and Elbow

How does the champion pick places to work, though? He tried to explain:

“Well, first off, it comes down to pay. I know I’m in a position now where I can dictate more about what I want to do, financially. Secondly, it comes down to what guys have been going out there and doing. This business is built on guys taking advantages of opportunities and if you look at the wrestling landscape, you can see guys that their names keep popping up here, keep popping up there. And so I want to give those opportunities to guys that are trying to step out of the box and do something different and stand out. Not to mention, I want to fight tough guys. I’m a grown-ass man. I want to fight guys that that can handle themselves in the ring. Not to mention, I have to be prepared that if this guy beats me, he’s going to be the next one to lead the ship for NWA.”

The NWA is sailing into familiar territory, with the debut of its NWA USA show on YouTube on Saturday, January 8. The original NWA Powerrr show was available on YouTube, developed a following, and then the pandemic hit. Unlike some of the other promotions, the NWA paused. When it relaunched, NWA Powerrr was only on Fite TV on a subscription basis. Some fans followed, others didn’t.

Murdoch heard the feedback, and believes the return to YouTube, with a second show, will “help a tremendous amount.”

“We need to be easily accessible. Fite TV has been a great partner for us, and they have bent over backwards to help us and work with us. But I think we do need to be back on YouTube, where we can hit a wider audience and just get more eyes on us,” said Murdoch.

As the champ, eyes and ears are on Murdoch. Asked what his advice would be to his younger self, now that he is on top of the world, the 41-year-old chucked.

“Listen more to the older veterans. [When you are] young, you tend to think you know everything, and you think you know better than everybody else. Just open my ears and close my mouth a little bit more would be the best advice I can give. You want to have the best match, you want to have the best match of the night, you’ve got to be able to trust people that have been there. And it’s hard to trust people in the pro wrestling business,” he began. “You do tend to find, not in this locker room, but you tend to find a lot of people that are only focused on themselves. Pro wrestling is a back and forth business. If you have egos, step into the ring, and if you have people think that they’re better than they are, it doesn’t do any good for anybody. You tend to not have the best of matches.”

Others seek him out for advice now. “I’ve been wrestling for 22 years now so, even when I wasn’t the champ, guys were still coming up to me asking my opinion. That’s what I really enjoy is the fact that I’m able to take a young guy and paint a picture for him and for him to see it and be like, ‘Man, I didn’t even think about it like that.’ And then to watch that young guy go out there and execute it, and it works, it makes me feel good inside — especially as I started getting older, you know what I mean? I went from being the youngest guy into the locker room, now I’m one of the veterans in the locker room.”

He said that the creative team, primarily Corgan and Pat Kenney, have “an open door policy with me anytime.”

“That isn’t just because I’ve become champ,” Murdoch clarified. “That’s again, another positive thing about NWA, is that even though the boss is a multi-platinum selling record artist, he is very attainable for us, he’s very easy to get a hold of, and talk to, and interact with. The great thing about Billy and Pat too, is they have ideas, and they talk to the talent about it, it isn’t set in stone. There’s a lot of communication with those guys, and that makes my job easier, it makes everybody’s job easier when you have the boss and talent relations that accessible to you.”

At the moment, Murdoch is the captain of Team NWA. “The group mentality here for the NWA is that we all want this to be great. We all want to do well. So the only way that’s going to happen is if we all pick each other up and and carry each other to that finish line. It’s not a one-man band. We are a group of men and women that care about each other, that care about each other’s well being, and we want to take the NWA and make it something special.” 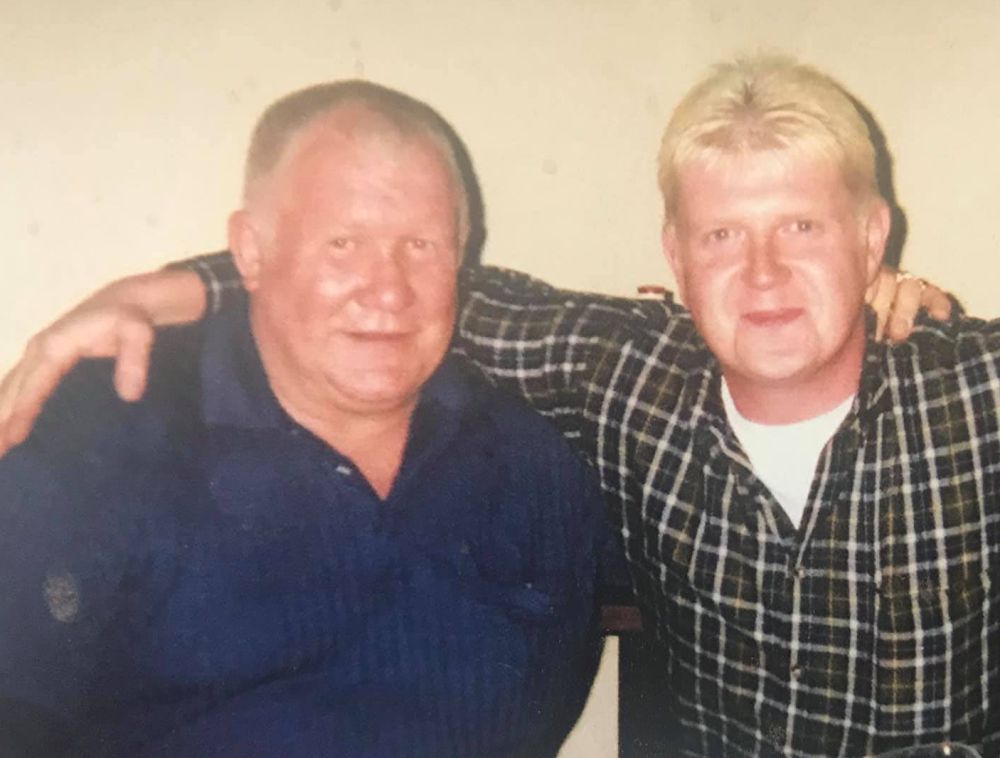 Harley Race was someone special, and now Trevor Murdoch is too, both NWA World champions.