Yano and Kanemaru get sloshed, Ospreay is back and Phantasmo plays Santa at Road to Tokyo Dome 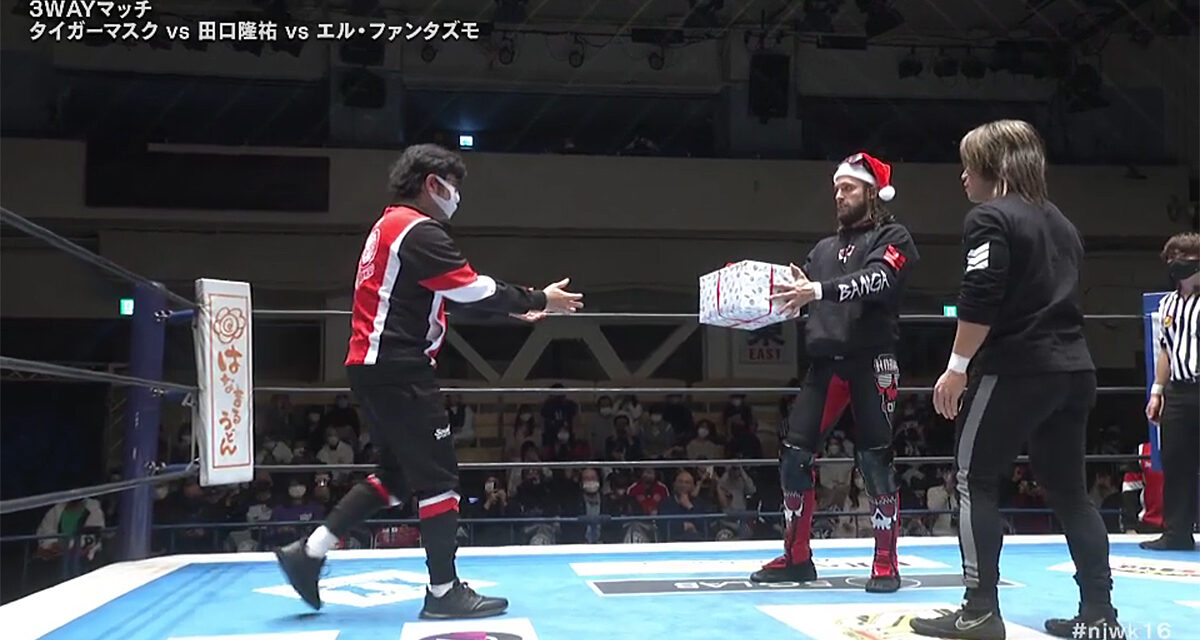 At the final night of NJPW Road to Tokyo Dome, Will Ospreay reappeared in the title picture, El Phantasmo was Santa Claus and Yano became the KOPW Champion of 2021.

After Robbie Eagles and Kazuchika Okada defeated BUSHI and Shingo Takagi in the main event of the evening, Will Ospreay appeared in a video message.

“Did you miss me?” laughed Ospreay as Okada and Takagi postured in the ring. Ospreay informed everyone that he was back in Japan. He claimed that whoever wins the IWGP World Heavyweight Championship at Wrestle Kingdom would be the “interim champion”.

“I have been waiting my entire career to main event a Wrestle Kingdom and it is finally going to happen. Whether it is Shingo or Okada it doesn’t matter because nobody is going to stop me from fulfilling my destiny,” Ospreay proclaimed.

The Booze Feud came to its alcohol infused conclusion with Toru Yano becoming the KOPW Champion of 2021. In the match, both wrestlers were required to take a drink at two minute intervals. After beverages have been downed both wrestlers will have to respond to the referee’s 20 count. Should a competitor fail to respond they will lose the match, in addition to victory earned via pinfall, submission, disqualification, etc. Yano refused to get into the ring at the start of the match. The timer ran out so both had to take a shot before they even locked up. The crowd cheered them on. 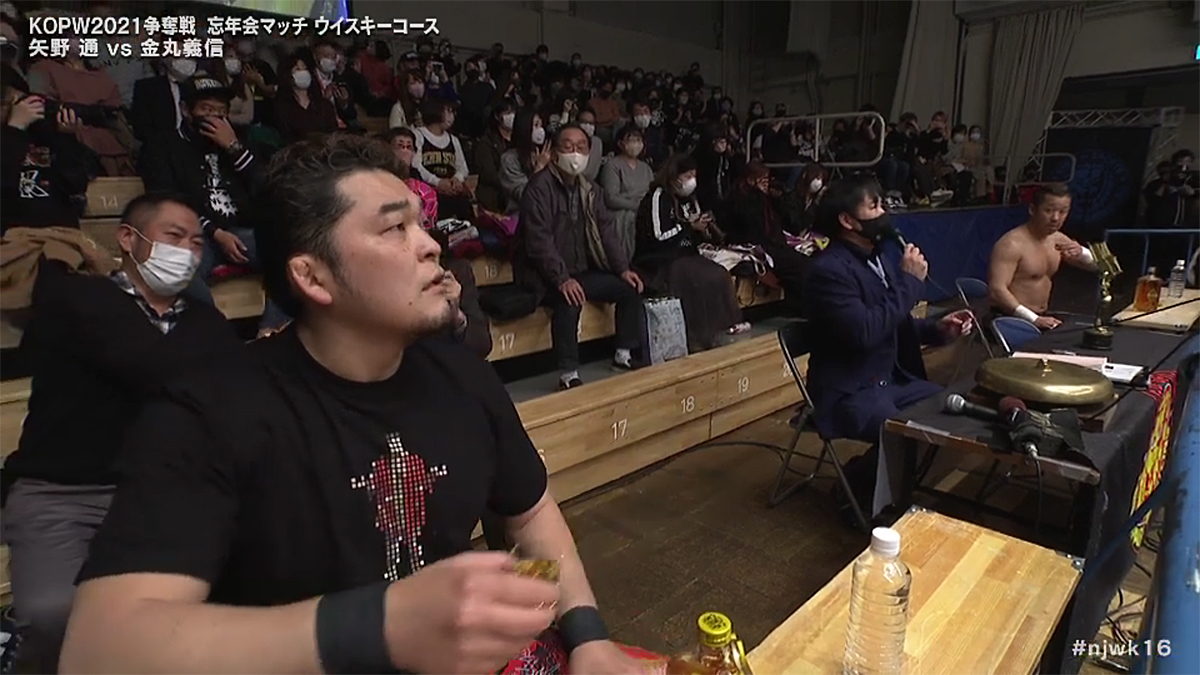 The combatants get ready to stuuuuumble. Courtesy: NJPW.

Yano and Yoshinobu Kanemaru sat down at separate tables to face the stipulation. Both men opened their whiskey bottles to prove they had not be tampered with. The referee started a 20 count for them to down their shot and get back into the ring. Yano tried a sneaky pin on Kanemaru but he kicked out. Each went for a series of failed roll-ups. Taking a kick to the chops Yano rolled out of the ring. Kanemaru chased him outside hurling him into the ringside barrier.

The countdown clock chimed and it was time for another shot. The crowd cheered on both men as they made their way back to their assigned tables. Yano finished his drink first ran back into the ring and tore off one of the turnbuckles. Yano shook Kanemaru’s head around hoping to make him even more disorientated. Kanemaru whipped Yano into the exposed turnbuckle. The timer ran out again.

Kanemaru had a plan. He downed his whiskey, ran over to Yano to grab his hand and prevent him from doing so within the time limit. Yano made it back to the ring at 18. Kanemaru twisted Yano into a rolling cradle for a two-and-a-half count. Ding went the timer. 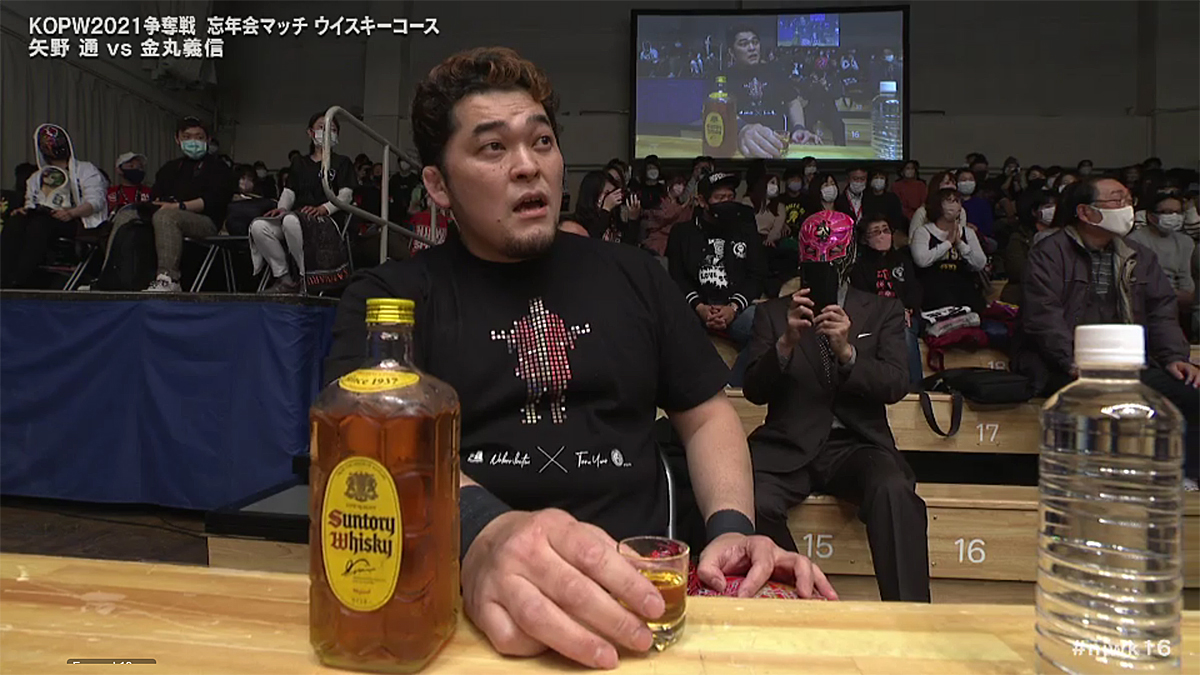 Yano readies himself for another drink. Courtesy: NJPW.

Hoping to get Yano counted out, Kanemaru pitched a Young Lion into him. Yano beat the count and Kanemaru took a drink out of his own whiskey bottle in the ring. Before he could spit the whiskey into Yano’s face, Yano covered his mouth with his hands. Yano punched him in the “lower abdomen”. Kanemaru spit the whiskey into the official’s face. Yano took Kanemaru’s bottle pouring the contents down his throat. Yano pinned Kanemaru with a powerbomb to become the KOPW 2021 Champion. 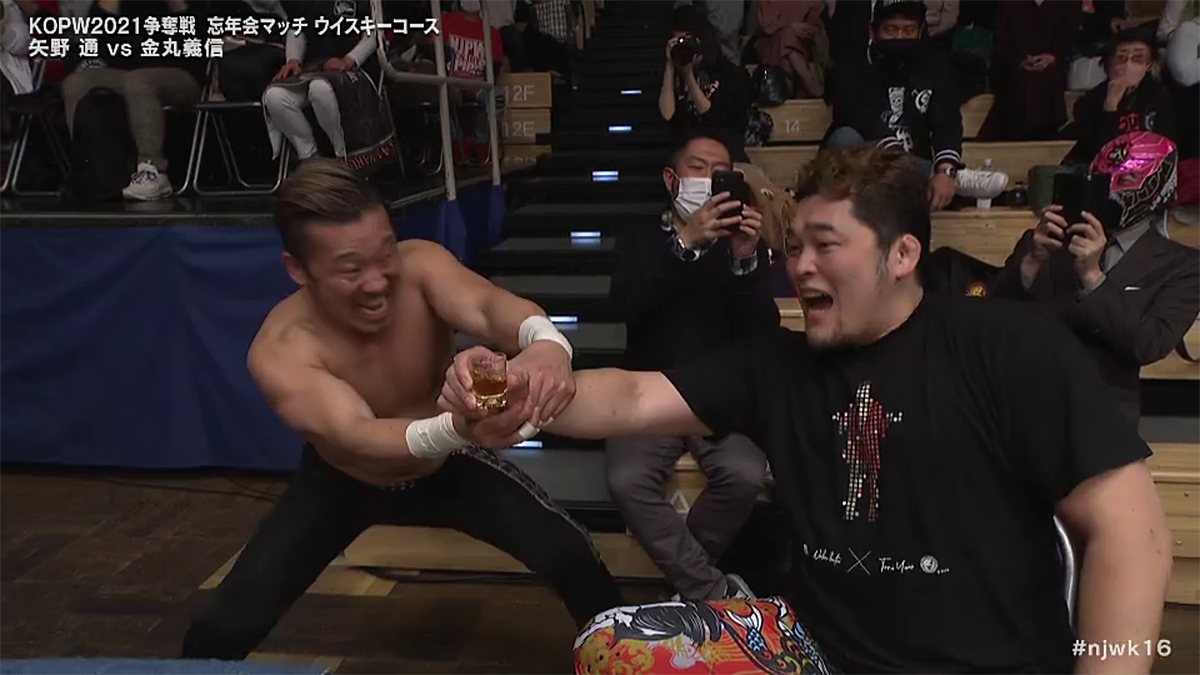 El Phantasmo was in the holiday spirit at Road to Tokyo Dome as he prepared to face Tiger Mask and Ryusuke Taguchi in a triple threat match to begin the show. He came down to the ring with a Santa hat on while Ishimori brought a present with him. Ishimori, Phantasmo burned several members of the audience by offering the present and then pulling it away. They even fooled announcer Milano Collection A.T. The pair finally invited a Young Lion into the ring to accept the gift. Phantasmo dropped it on the mat and stomped on the empty box.

Tiger Mask’s ribs are all taped up, probably due to the attack he suffered. Phantasmo gives him a Sudden Death super kick to the stomach. Mask falls through the ropes to the floor. 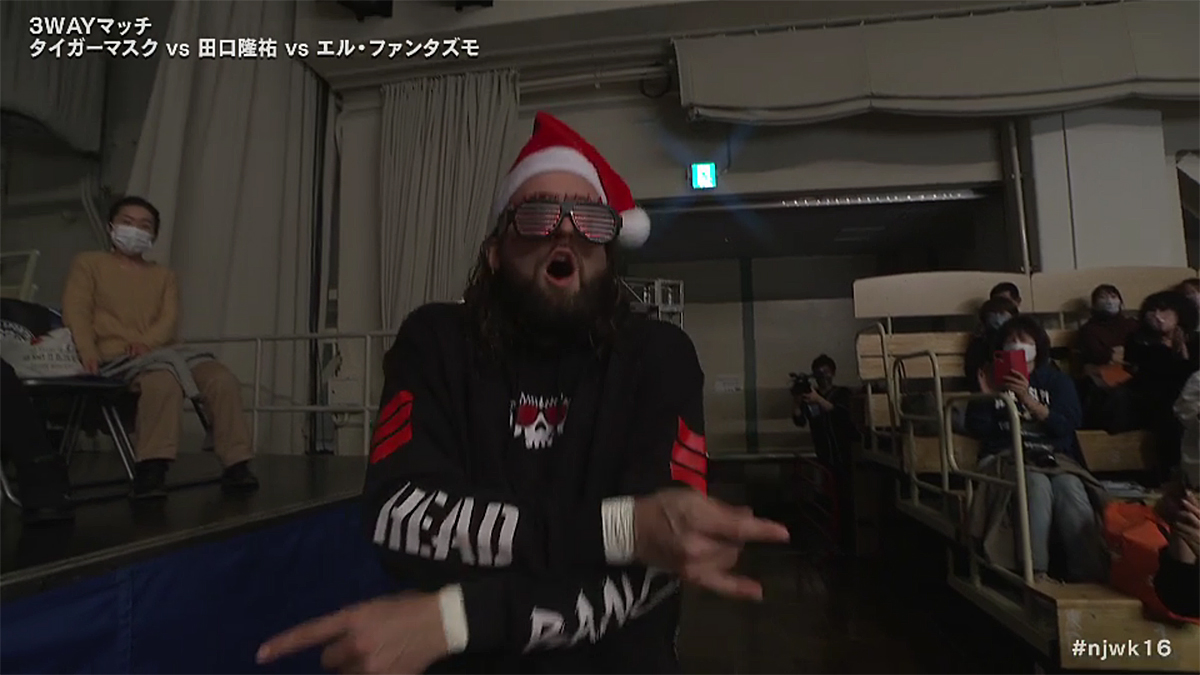 “I promise. It’s Christmas!” says Phantasmo assuring Taguchi there is nothing in his boot.

When Taguchi shakes Phantsmo’s hand he gets his foot stomped with the loaded boot.

Taguchi has Tiger Mask pinned. Phantasmo covers them both for the win.

Ishimori clobbers Tiger Mask and Taguchi after the match. Young Lion after Young Lion steps in front of Taguchi so he won’t get super kicked with the loaded boot. They all get knocked out. As they set up Taguchi for the kick, Robbie Eagles appeared chasing off the heels. The faces try to take Phantasmo’s boot off. He wiggles free and escapes.

Wrestle Kingdom will air on January 4 and 5, 2022, at the Tokyo Dome, in Tokyo and January 8, at Yokohama Arena in Yokohama, Japan.

Cobb pins Nagata with Tour of the Islands. 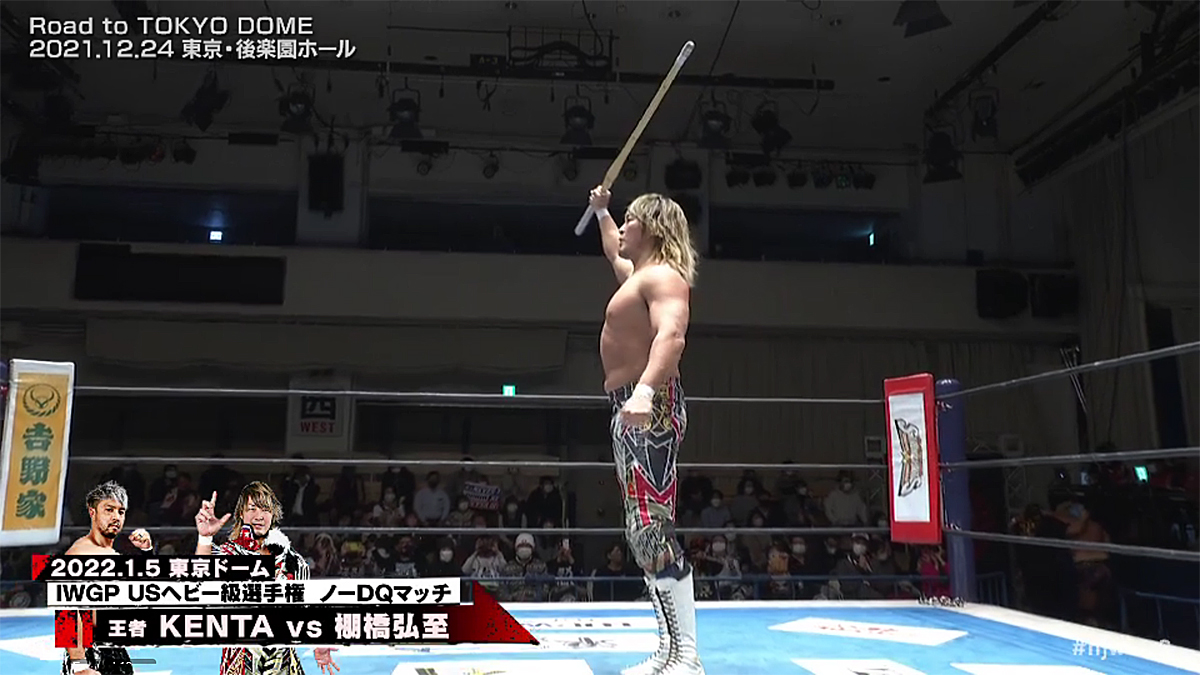 Fale puts Honma away with the Grenade. Kenta blasts The Ace with a steel chair after the bell. Owens holds Tanahashi for Kenta who has a kendo stick in hand. The Ace fights out of the predicament. He chases Bullet Club out of the ring with the kendo stick.

Goto and Hashi pin Togo with Shoto. Ishii and Evil have a steel chair battle on the floor. Evil wins that with a low blow after his chair gets knocked out of his hand. Evil crushes Ishii in the middle of the ring with Everything is Evil.