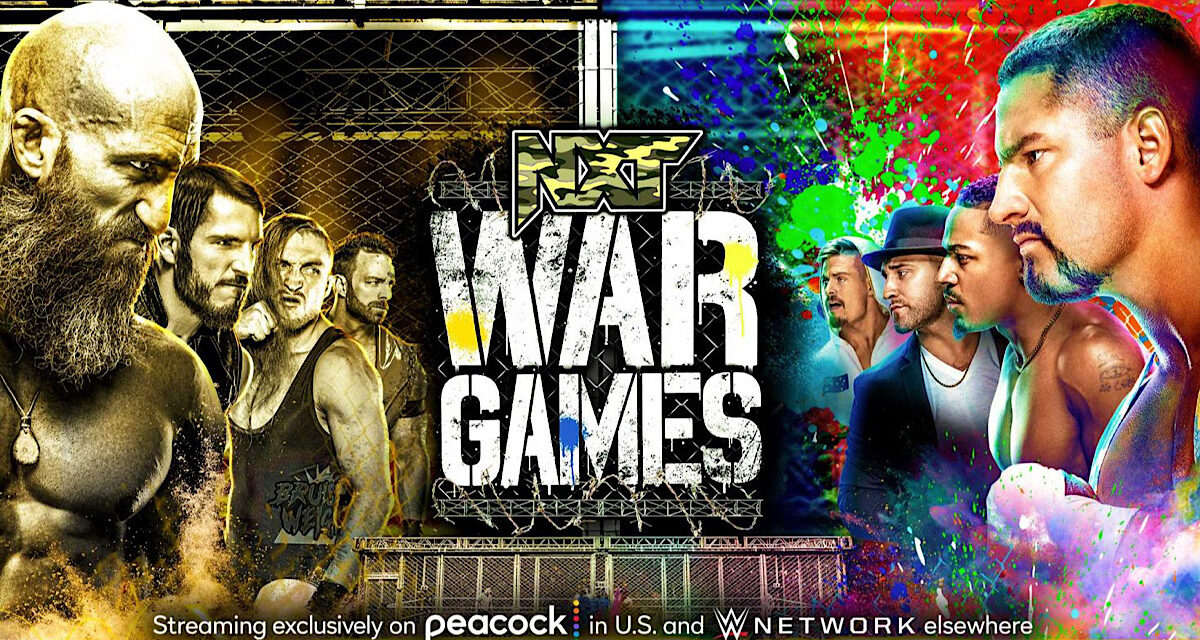 A legendary fighter once said, “We’re not here to take part, we’re here to take over!” Well, NXT dropped its subscription to that notion and simultaneously dropped the storied TakeOver moniker of seven years. The days of selling out arenas and revolutionizing the industry is behind NXT — and so are numerous figures. Although tonight’s banner spectacle is the annual WarGames matches, the real attraction is this: is tonight Kyle O’Reilly and Johnny Gargano’s last hurrah under the NXT brand?

The NXT 2.0 women’s division is a mixed bag, and expectedly, so is tonight’s opening matchup. There’s no sugarcoating the inexperience of participants like Jade and Jacy Jayne, but the overabundance of weaponry sure helps. It’s messy and chaotic in an entertaining way — exemplified by kendo stick battles and trash can stuffings. But star players in Shirai and Gonzalez pull it all together. Despite having a heel faction for the standard WarGames advantage story, they go a different route, and it surprisingly pays off. Following a cage dive, Jade supposedly injures her shoulder, giving Toxic Attraction the advantage anyways. But when everyone else is down, Jade makes the timely cover for the victory.

Speaking of maybe or maybe not, although it’s awfully predictable, O’Reilly and Wagner are competing for the NXT Tag Team Championships. It’s hard paying attention to anything other than contractual drama, but granted, the talented wrestlers and Wagner have an incredible tag team showing. Imperium’s Fabian Aichner especially impresses with absolutely insane strength and agility, and O’Reilly — the tag specialist of course — looks himself again. Closing this unanticipated show stealer, Imperium hits the finishing powerbomb for three. The cherry on top? O’Reilly ducks Wagner’s post-match blindside, flashes the “UE” hand sign, and stands supreme to “thank you Kyle” chants.

Legado del Fantasma is interviewed backstage, and Santos Escobar says that Xyon Quinn will face reality. Elektra Lopez is “a grown-ass woman” and doesn’t like being questioned about her relationship with Quinn.

Grimes’ luscious locks are obviously not perishing, but still, this rivalry has undoubtedly been NXT 2.0’s best yet. It’s Hudson’s first big matchup — big like his 6’5” frame that commentator Wade Barrett keeps drooling over. He takes control until Grimes makes his signature comeback, showing that he’s an equally good wrestler and character. And after escaping the Razor’s Edge, Grimes rolls Hudson up, pulls the trunks, and wins the matchup. Although Hudson fights it, a Cave In knocks him loopy into the barber’s chair. Don’t worry, Duke — buzz cuts are in!

Gacy is backed by Harland, and Strong is backed by his racially-diverse Diamond Mine faction; although race isn’t the issue. Gacy says the Cruiserweight division isn’t inclusive, and he’s breaking through that dastardly 205 weight limit. Strong isn’t fazed and takes majority control using his beautifully smooth offense. Gacy turns the tide, dives onto Diamond Mine, and restrains Harland from hurting female member Ivy Nile. But back in-ring, Strong hits the finishing End of Heartache to retain. Roddy isn’t going anywhere, anytime soon, unfortunately.

Kyle O’Reilly is interviewed backstage, calling out Von Wagner for a steel cage match this Tuesday. On second thought, O’Reilly isn’t unscathed by Wagner just yet.

Gargano enters to his vintage “Rebel Heart” theme song, and it’s oh-so bittersweet. The “heart and soul” nickname is encapsulated by overwhelming fanfare, even more so considering the underdog position Gargano is in; Williams assists the already advantageous Team 2.0 with various weapons until Dexter Lumis chases him away. D’Angelo chains the door shut, but Knight — climbing over the top — makes the comeback for Team Black & Gold. The team uses their weaponry, and Dunne harasses Waller’s fingers to amusing screams until Breakker enters. Having a Steiner moment, Breakker struggles to break the chain, but he succeeds eventually.

The final competitor, Ciampa, enters the matchup with his signaturely energetic comeback. With a symbolic crutch, he assists former #DIY partner Gargano, and Team Black & Gold regain control. Gargano throws Hayes into a garbage can, Knight superplexes Hayes through a table, but a Tower of Doom evens the playing field. It’s one crazy spot after another: Ciampa Air-Raids Breakker through a can, Waller’s cage-dive elbow obliterates a table, and D’Angelo delivers a top-rope neckbreaker with a crowbar in-hand. But the #DIY reunion stands above all, simply for the meaning. Gargano and Ciampa deliver their tag team finisher to Breakker, but the latter recuperates. Breakker spears Ciampa through a table, hits his finishing slam, and wins WarGames for Team 2.0.

Rarely is NXT 2.0 an enjoyable watch, but NXT WarGames certainly was. In fact, it was pretty captivating. The utter carnage of both WarGames matches is an annual tradition, and in between were some solid cageless matches. The legitimate scenarios regarding contract statuses and the state, in whole, of NXT gave NXT WarGames the genuine emotion that the weekly programming just doesn’t have.