SmackDown: Kings, Queens, and Hell on the horizon 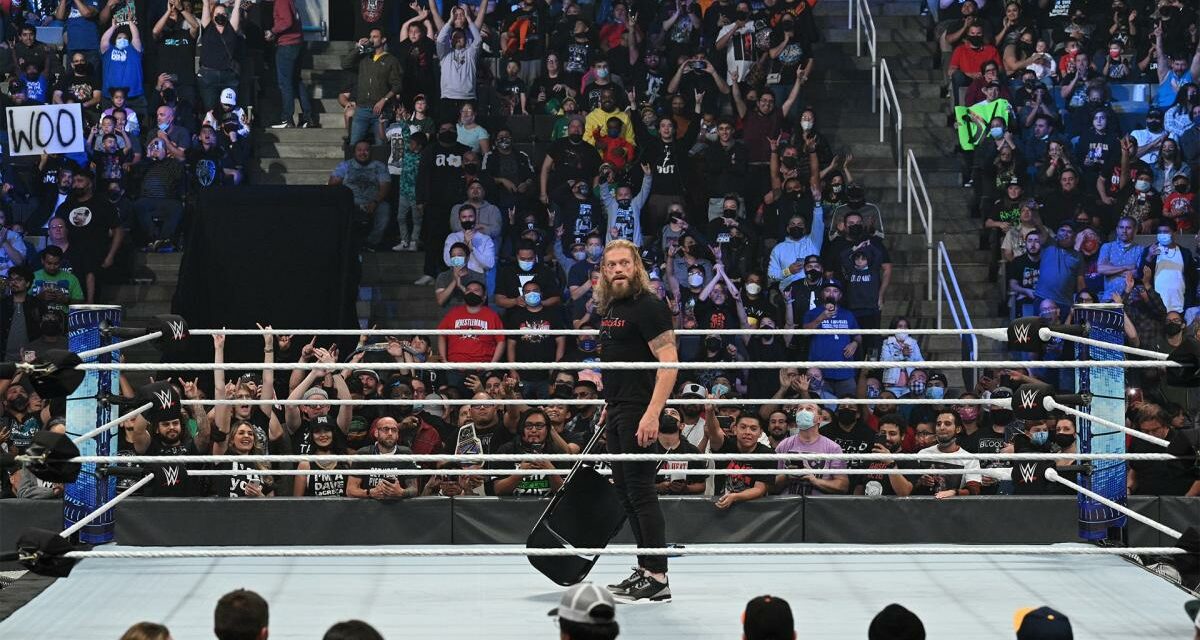 San Jose, CA brings us the season premiere of SmackDown (though, considering that the season finale was last week, it’s not like there was a lot of time for intrigue to build). The show begins with a contract signing for the upcoming triple threat match for the Women’s Championship between Becky Lynch, Bianca Belair, and Sasha Banks, taking place at Crown Jewel. With all three talking trash, nobody even comes close to signing for the match and Belair drops Lynch on top of Banks, putting both through the table.

Rey Mysterio VS. Sami Zayn – King of the Ring First Round Match

Mysterio, who according to Pat McAfee is in his 75th year of competition in the WWE, opens with an early hurricanrana, but Zayn responds with a Blue Thunder Bomb. Mysterio picks up speed and sends Zayn to the floor, then somersaults over the top rope and lands another hurricanrana on the floor.

As a strong “Sami” chant accompanies the commentators’ efforts to imagine how awful it would be to have Zayn win, Dominik ambles down to the ring to keep a close eye on the match, even though he had told his father he’d watch from the back. Yet another hurricanrana stops Zayn’s Helluva Kick attempt, and one more from the top rope gives Rey a two-count.

Zayn, after delivering another Blue Thunder Bomb, unties one of the turnbuckle pads and tosses it to the floor, where Dominik picks it up to tie it on again. As Rey admonishes Dominik to get off the apron, Zayn attacks from behind and shoves him into his son, then rolls him up for the win. 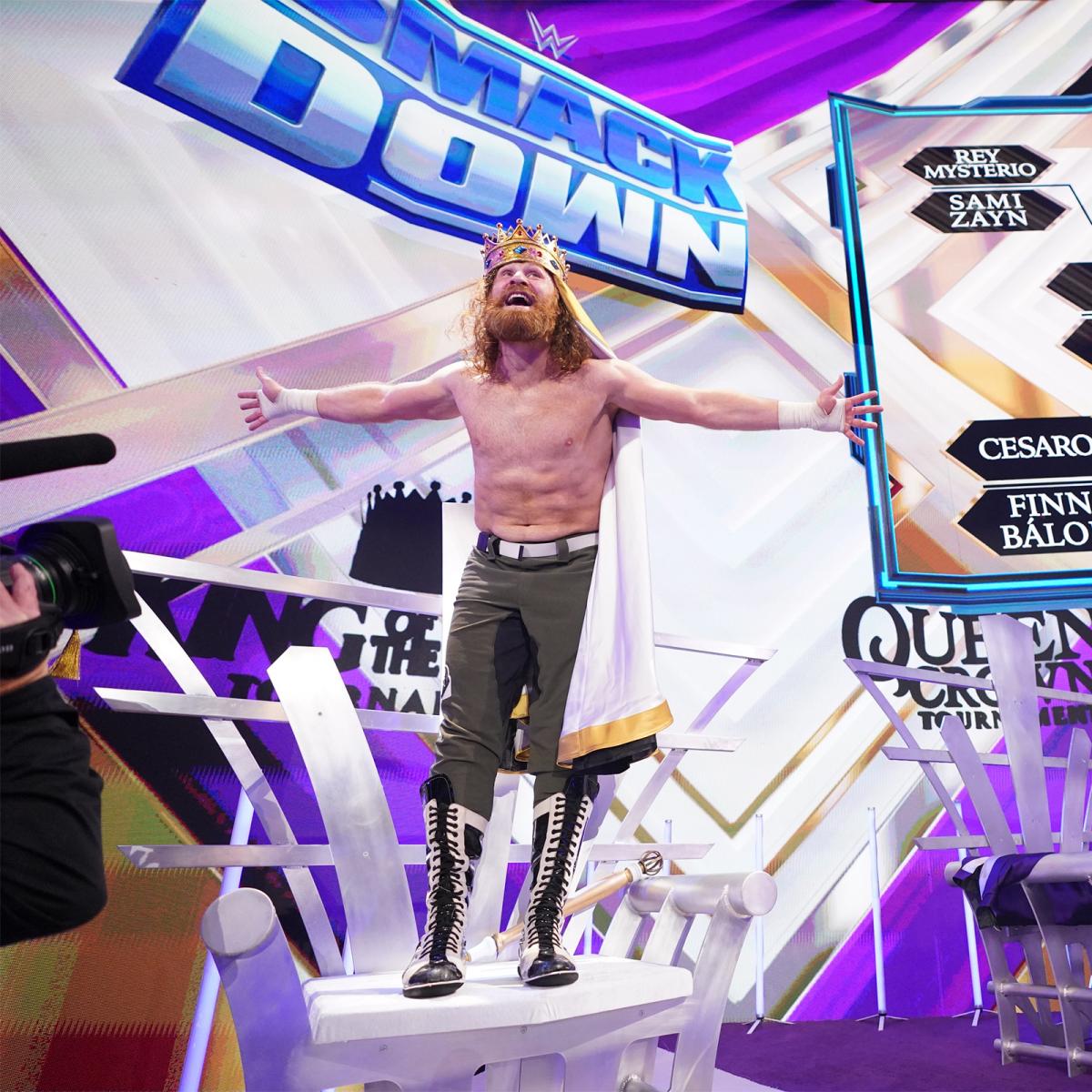 Zayn tries on the King’s garb, and seems to like it. Photo: WWE

Backstage, Seth Rollins is with Kayla Braxton and defends his actions in his feud with Edge. He sets off to find someone with the power to give him the match he wants.

Storm catches a kick and flips Vega to the mat, who responds in frustration with a Lou Thesz press as McAfee attempts a pretty bad Australian accent. Storm delivers a headbutt and an atomic drop, and as she tries a backslide, Vega reverses it into her Code Red finisher for the win.

After a break, The Bloodline comes to the ring. Roman Reigns get a cheer for saying the name of the city he’s currently in while The Usos and Paul Heyman flank the champ. Reigns acknowledges Heyman for ensuring that Jimmy and Jey were drafted to SmackDown, but he delivers a thinly veiled threat as he continues to seek the truth about Heyman and Lesnar’s relationship.

Heyman stumbles through an explanation, which actually sounds more like he’s revealing his plan to turn on Reigns at Crown Jewel. Reigns interrupts him and instructs Heyman to speak directly to Lesnar through the camera. The crowd is hot for Brock as Heyman details to the camera how Reigns will retain.

Elsewhere, Rollins has found Adam Pearce and Sonya Deville and hands over a framed photo of Edge and Beth Phoenix for them to return to Edge, saying that if he doesn’t have a match scheduled with his nemesis, the end of the show will not go as planned.

Just like last week, Carmella ducks to the floor and has her protective face mask installed. The bell rings and Morgan is almost immediately trapped in the Code of Silence. She escapes by grabbing Carmella’s mask and forcing her to release the hold. A Jersey Codebreaker soon follows, but Carmella escapes the pinfall by getting a foot on the ropes. 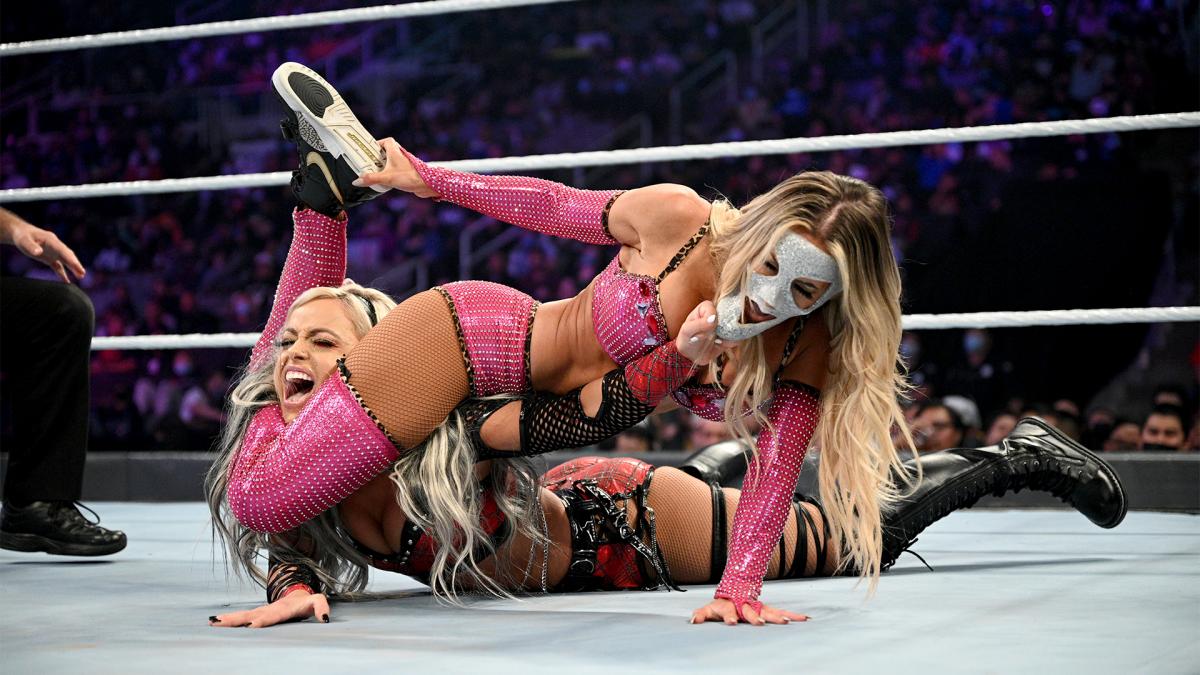 Giving up the submission to protect her face seems like the kind of thinking that should have cost Carmella the match. Photo: WWE

Back in the middle of the ring, Carmella hits a way-too-close superkick for the win.

Braxton has another guest, inviting new SmackDown draftee Mace to introduce himself. He is not impressed with the Friday night roster.

In the ring, it’s Happy Talk time as Happy Corbin and Madcap Moss try to start a show, but Kevin Owens heads to the ring to take them both on. They beat him down, and the segment is over. That took a lot of ring decoration for a complete lack of talk show.

So, Finn Balor is just moving on from his short, ultimately pointless Demon-led feud with Reigns? That’s so sad. Unsurprisingly, these two start with smooth, impactful contact, with a tilt-a-whirl backbreaker by Cesaro leading to a long sequence of dominance before Balor dodges a corner charge and launches the Swissman over the top rope to the floor.

As Balor thinks about flying over the top rope in attack, Cesaro slides back in and pops Balor up for an uppercut. After a break, the uppercut show continues before a Sling Blade lays them both out in the middle of the ring. Balor takes charge, thinking of a Coup de Grace before Cesaro uppercuts him yet again and delivering a superplex for a two-count. 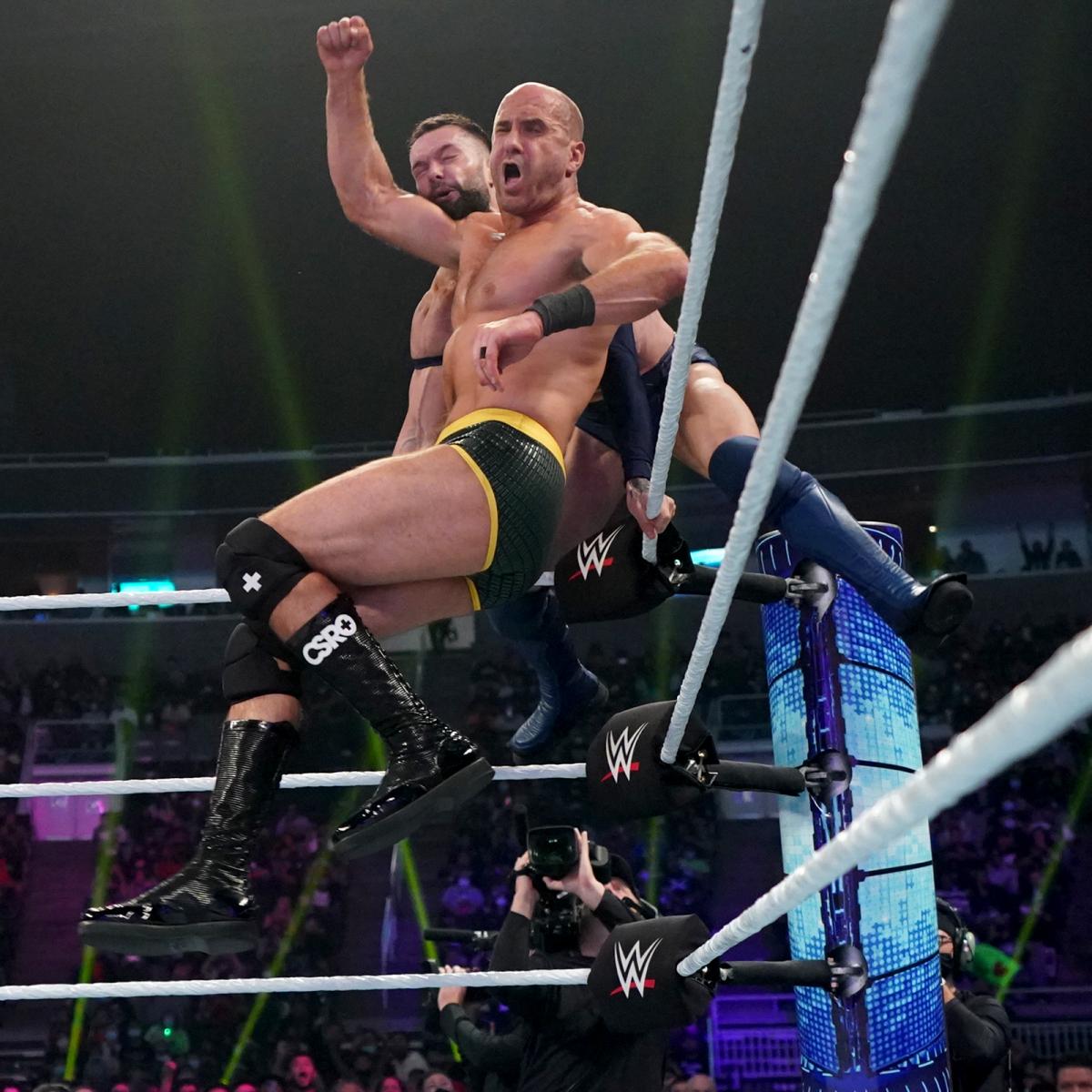 This manages to look painful for everyone involved. Photo: WWE

Balor sends Cesaro through the ropes to the floor and this time finishes his dive over the top. A dropkick and a Coup de Grace brings an end to what could have / should have been a big show main event match.

Backstage again, Lynch unloads her grievances on Pearce and Deville before they get to her to sign the contract.

Meanwhile, in the ring, Rollins is yelling for Edge and pleading for a match of any stipulation, at any time. Rollins expresses his disappointment in Edge’s silence and imagines how disappointed Edge’s own family must be with him, before a camera shows him arriving in the back to his theme music.

Rollins grabs a chair but he runs right into a spear. A second sort-of spear sends them both tumbling over the announcer’s table as they scrap all around the ring. One hard elbow by Rollins is enough to stop Edge and let Rollins escape up the ramp, so Edge grabs a mic and lays out his wish: a Hell in a Cell match. Rollins’ face turns a little ashen as the show comes to a close.

A show cut cleanly down the middle. More good work by Reigns and Heyman (it feels like it’s been a while since a storyline was hinging on the manager’s loyalty) and a refreshing take on Hell in a Cell (it’s being used because the two wrestlers hate each other, not because it happens to be the next themed PPV in the calendar), but the treatment of the Queen’s Crown first round matches was abysmal. I half-expected #GiveDivasAChance to trend again after two ludicrously short and noncompetitive matches.