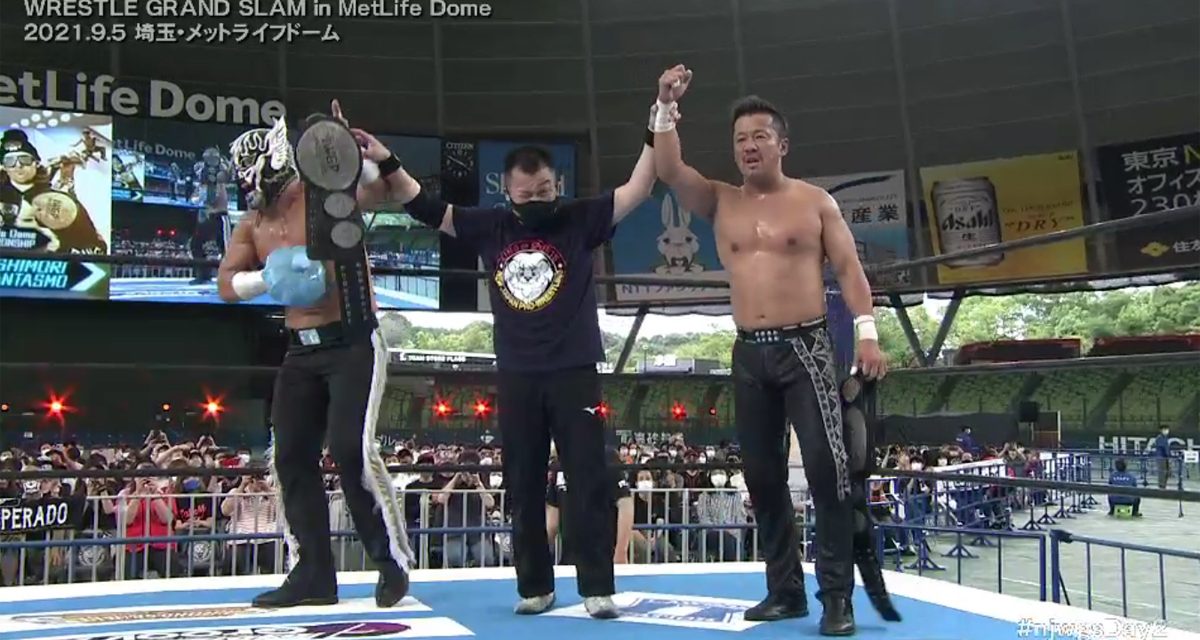 NJPW has new IWGP Jr. Heavyweight Tag Team Champions and the belts are already back on the line.

Yoshinobu Kanemaru and El Desperado’s fourth reign funnily enough was ushered in when Phantasmo stomped on Deperado’s foot, kicked him in the stomach which his suspicious, perhaps “loaded” boot.

Phantasmo steals Desperado’s Pinche Loco but it doesn’t put Desperado away. Phantasmo splashes Desperado with Thunder Kiss. Desperado still won’t be pinned. Phantasmo takes off his “loaded” boot, takes a swing at Desperado. Desperado ducks and clobbers Phantasmo with a punch. He is about to look inside the boot when Ishimori throws the official into him.

Ishimori and Phantasmo fight over the boot. Kanemaru clocks Ishimori in the head with his whiskey bottle. Desperado hits Phantasmo with Phantasmo’s own boot in the head. Phantasmo is knocked out. Desperado rolls around on the mat holding the hand he held the boot with, he has injured it…we assume becauese of the loaded boot. Desperado pins Phantasmo for the titles. 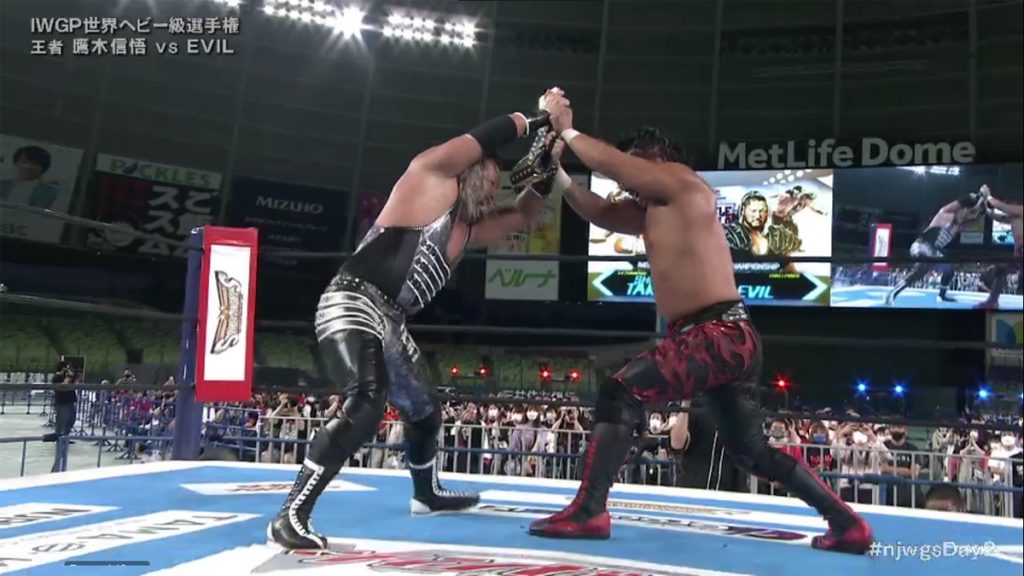 Shingo and Evil battle for the belt in more ways than one. Courtesy: NJPW.

IWGP World Heavyweight Champion Shingo Takagi held onto the title by defeating Bullet Club challenger Evil with a little help from his Los Ingobernables de Japon pals. Takagi has Evil beat with Made In Japan but Togo pulls Red Shoes out of the ring. Togo grabs his garotte choking the life out of Takagi. Takagi powers his way out of it lifting Togo into the air. Yujiro Takahashi runs in with his cane hitting Takagi in the head. Yujiro dumps Takagi with the Pimp Juice DDT. Takagi kicks out of an Evil pin. The kick out though sends Evil on top of Red Shoes.

Togo is back with his garotte. Evil grabs a steel chair. Out of nowhere in comes Bushi. He drop kicks the steel chair into Evil’s face and he takes out Togo as well as Yujiro all on his own. Sho attacks Bushi with a German Suplex from behind. Sho breaks a steel chair over Takagi’s head. He lifts up Takagi for Shock Arrow. LIJ’s leader Tetsuya Naito and Sanada show up to even the odds.

After the brawl, Evil and Takagi have a tug-of-war over the belt. Shingo wins possession of it, decides not to hit Evil with it in the end. He graciously hands the belt to Red Shoes instead. Shingo retains with Last of the Dragon.

Syuri and Giulia vs. Saya Kamitani and Momo Watanabe 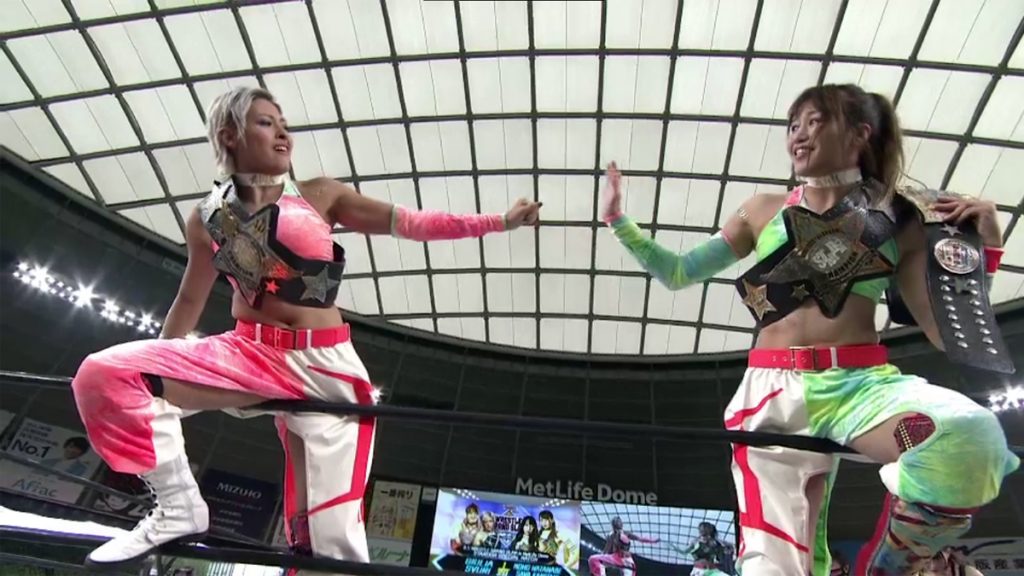 The Queen’s Quest team of Kamitani and Watanabe face off against the Stardom tag team champions, Donna del Mondo faction’s Syuri and Giulia, two of the best wrestlers Stardom has today and two of the best in the world. You can bet North American promoters are already scouting Giulia, for sure. Syuri and Giulia are the team of A-Level Madness. As I stated yesterday, HHH was wrong about the best women’s wrestling in the world. That would be Stardom. The amount of monthly content for only like $9.00 a month is amazing at https://www.stardom-world.com but…enough of my shilling.

Kamitani hits the Star Crusher on Syuri. As she goes to the top rope, Syuri Giulia cuts her off at the pass. A-Level Madness double teams Kamitani and a Stretch Muffler by Syuri wins the match for Donna del Mondo.

Tomohiro Ishii and Kazuchika Okada vs. The United Empire (Jeff Cobb and The Great-O-Khan)

Okada really isn’t interested in this tag team match. He just wants to take apart Cobb. Cobb flattens Okada with belly-to-belly suplex on the stadium floor. Ishii and Khan are left to fight in the ring as Cobb and Okada brawl on. Ishii loses the war to Khan who puts him away. Okada and Cobb bicker on after the bell. Okada helps his pal Ishii to the back.

Winners: The United Empire (Jeff Cobb and The Great-O-Khan)

Sanada gets confused. He tries to pin Hashi with a moonsault but Hashi is not the legal man. Minutes later, Taichi pins Hashi with Black Mephisto. 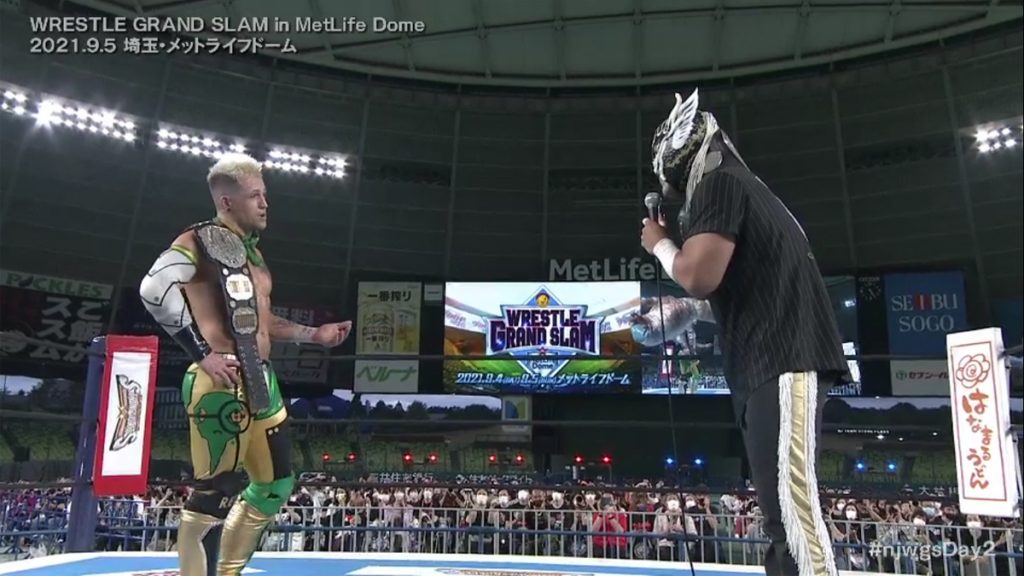 In a great move, Eagles hits a Turbo Back Pack from the top rope on Hiromu. A 450 Splash and a Ron Miller Special makes Hiromu submit.