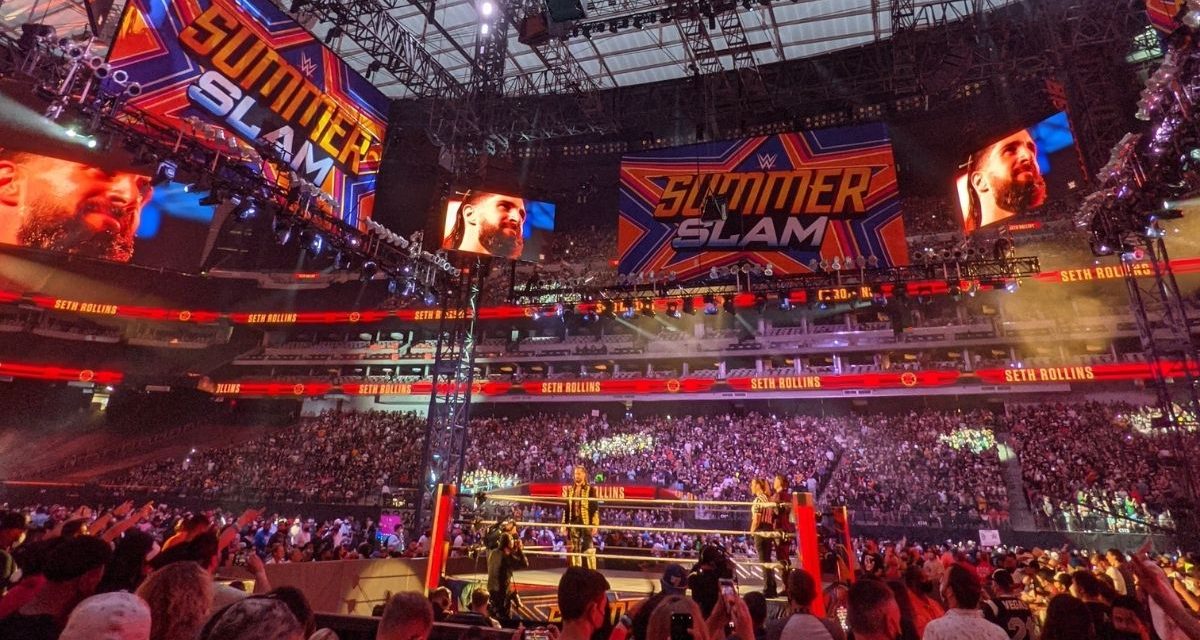 LAS VEGAS — Traveling for professional wrestling shows is somewhat of a hobby for me. This marks nine straight WWE stadium shows I’ve attended, dating back to WrestleMania 32. Even through all those marathon Manias, through the good, the bad and the ugly, none have left me with a worse taste in my mouth than Saturday’s SummerSlam at Allegiant Stadium in Las Vegas.

The heat was on outside the stadium, racking up to near triple digits on the Fahrenheit scale, but inside the stadium it was anything but. Outside of a few moments during the show, the crowd mostly sat on its hands the entire night.

However, let’s not blame the crowd for this.

The show was a logistical disaster. First and foremost was the layout of the building. The ring was set up at about the 20-yard line of the football stadium instead of the normal 50-yard line configuration of pretty much every other football stadium show the company has produced. This created a situation where many of the seats were very far away from the action and at angles.

Second, pillars were erected for the lighting and video screens — an unusual change. Generally speaking, when in a domed stadium, there is no need for this, and WWE hasn’t used this in any of the domed stadiums I’ve been to shows at. This compounded the setup problem as a majority of the seats, which were far away to begin with, had to look through pillars to see the ring.

Next is the production. To me, for a billion dollar company that prides itself on producing a great show (and generally does), not having pyrotechnics for a stadium show in front of your biggest crowd since April 2019 is inexcusable. Pyro hypes the crowd. There’s no two ways about it. Then we go back to the logistics of the setup. There was no stage. The wrestlers entered from a tunnel entrance with a few LED boards — meaning if you were on the floor, or off to the side where a lot of seats were, you had zero chance of seeing the entrances.

From a production standpoint, this was truly no better than a house show with a few more lights and LED boards. It was a complete and utter embarrassment and hurt the show greatly.

And to add insult to injury, there were reports during the show that the concession system was down (Allegiant Stadium is a cashless venue, so it can create some issues when the processing systems don’t work) and concessions could not be purchased. On top of that, the in-stadium WiFi was not functional and there were additional reports of overflowing toilets. If you’re scoring at home, this stadium, home to the NFL’s Las Vegas Raiders, cost $2 billion USD to construct.

With myriad issues from a production and stadium standpoint, the in-ring action was nothing to write home about, either. The crowd reacted big for the returns of Becky Lynch and Brock Lesnar, sure. Matt Riddle and Randy Orton were hugely popular. And obviously Roman Reigns, John Cena and Edge were going to be as well.

There was a lot of disappointment in the clear bait-and-switch of the Smackdown women’s title match, with Sasha Banks being unable to compete against Bianca Belair. Inside the building, you had no idea Banks wasn’t wrestling. Hopefully those who bought the Belair-Banks match t-shirt were able to procure a refund (yeah, right). Although Lynch got a big reaction, the crowd was not pleased with Belair losing in less than 30 seconds. Whether it was coming down from the Lynch return, Belair losing, or both, the remainder of the show dragged badly until the Edge/Seth Rollins match and the main event.

Bobby Lashley and Goldberg both received the reaction of crickets entering their WWE Championship match and the crowd turned on Goldberg heavily during the sloppy match. Suffice to say, the ending to that match did not help matters.

Then there was the segment with John Morrison, The Miz and Xavier Woods where the “comedy” got over about as well as a fart in church, mainly because you could hear a pin drop inside the stadium, many of whom had already been there for five-plus hours at that point.

After the show went off the air, Lesnar sent Cena packing with two German suplexes and an F5 for his troubles.

All told, this show was an abject failure from pretty much every way you look at it. With all the issues, this show’s only redeeming quality is to be thankful you didn’t fly across the country and spend money to be there. It was not a good one.