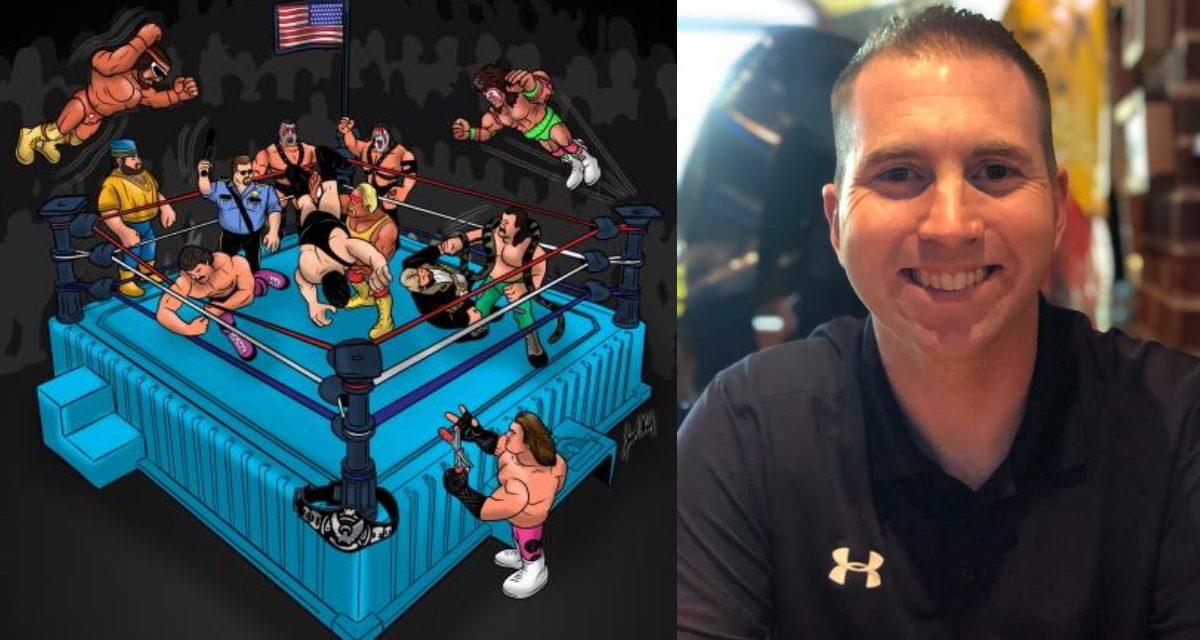 Author Grenville Nash has taken a love for WWF Hasbro to a whole new level with his just-released book Hasbook: A Collector’s Guide to Real Wrestling Action.

But the path that got him to this point actually started with the 2016 announcement of the WWF Hasbro inspired retro throwback figures made by Mattel (alas, since cancelled).

Growing up in South Africa did not provide Nash with much in the way of pro wrestling. He first came across it while on a family vacation to visit his grandparents in the United Kingdom. Then and there in 1994, at eleven years of age, his older cousin introduced him to the WWF New Generation and accompanying media, especially TV and action figures. 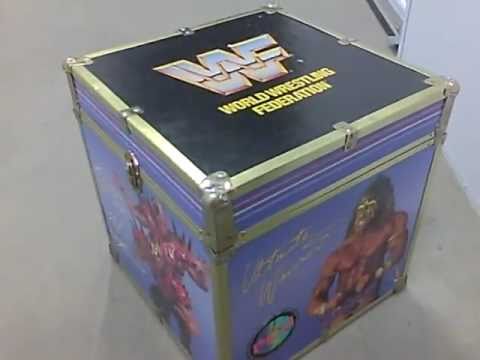 By the time he got into the hobby, the WWF Hasbros which had debuted in 1990, were on their last legs. But Nash got closer to the action when he and his family moved to St. Louis, Missouri — where he still resides — in 1994. There he was easily able to feed his wrestling “obsession” and consume it in abundance. It was also helpful that his mother was a “magician” who frequented garage sales and second hand stores and his father was a pilot who could figure hunt all over for his son.

Upon entering high school in 2002, Nash’s wrestling fandom had peaked and the forthcoming valley would be an abrupt pitfall as his playtime transitioned to video games. “I sold my entire collection apart from my two Bret Harts. Bret was always my favorite wrestler. I sold the rest on eBay for $150 dollars,” Nash recalled to SlamWrestling.net.

He admits he was happy at the time but looks back with regret. Today, a comparable collection would bring in excess of $2,000. 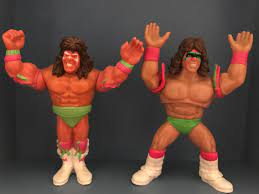 It would be over 15 years until the aforementioned figures by Mattel would rekindle Nash’s collecting hobby, and not only for wrestling but his other childhood interests of Thunderbirds and Captain Planet.

In the winter of 2019, he decided to take it a leap further. “I was sitting with a friend, a big wrestling fan… I’m a big coffee book collector as well… and I just joked [about] trying to write one.”

In hindsight, Nash thinks that if he knew what it would entail he may not have tried.

At the time, the idea was unprecedented. But in the nostalgia explosion of the past few years that peaked during the pandemic, three different WWF Hasbro genre books now exist, those being: Hasbromaniac’s Guide to WWF Hasbros and 1990-1994 Wrestling Action Figure Retrospective. 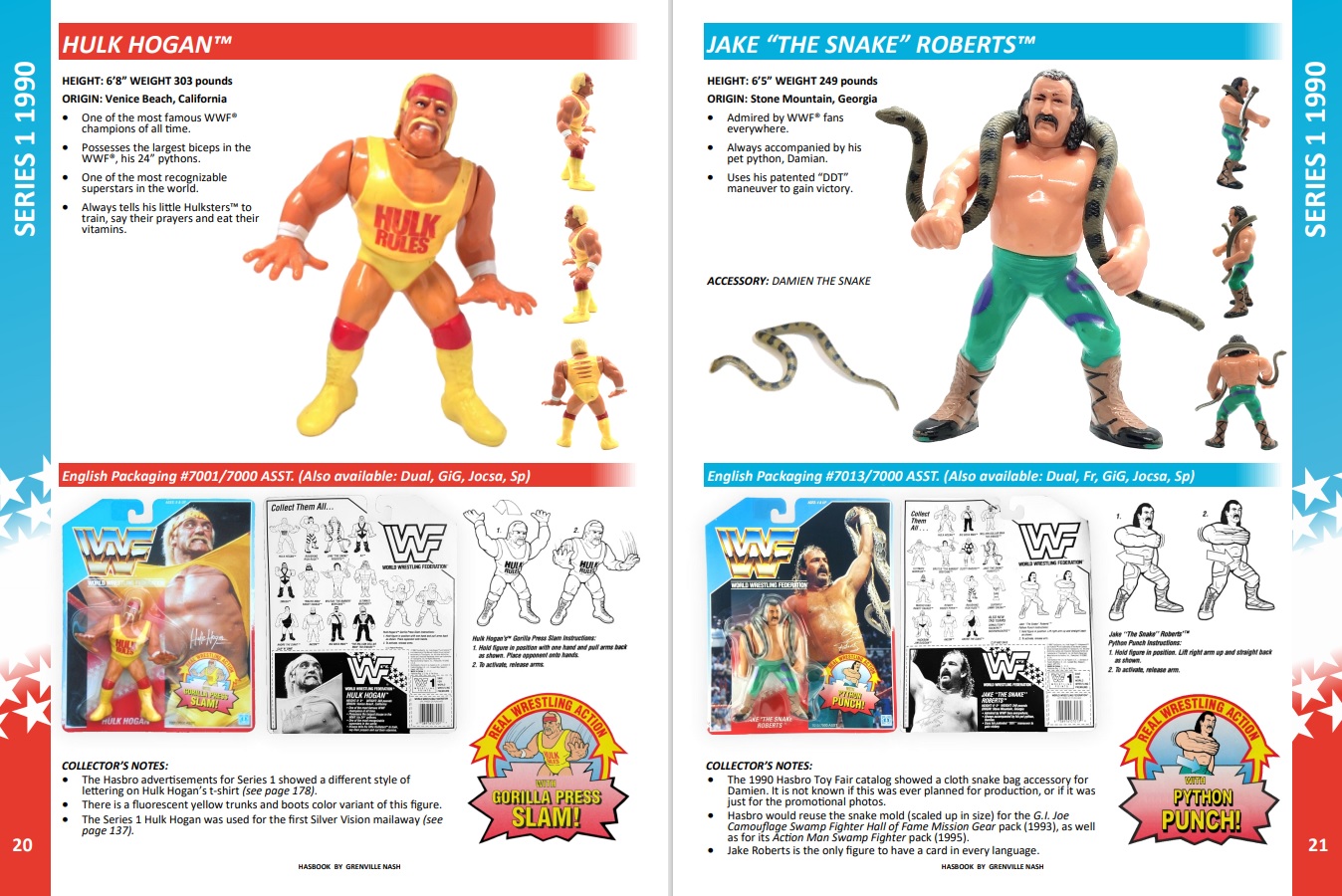 The lion’s share of the Hasbook and main attraction. Series by series figure profiles.

But Nash feels Hasbook: A Collector’s Guide to Real Wrestling Action stands out by achieving the goals he had set out. The book’s layout is clean, simple and easy to understand. “The white background was big for me. I wanted the figures to be center stage,” he said.

It isn’t the first time Nash has made his own WWF Hasbro content. As a child he made his own Titantrons and arenas.

The book is published by Niche Press and definitely has similarities to the other wrestling figure book it published, Complete Guide to WWF Wrestling Figures. Nash describes associate editor Brutus Valentine as “meticulous” and explains that “without him the book would not have been as good quality wise if he hadn’t kept me in line.”

But the Hasbook is less of a textbook that ties the figures into the wrestling era and more of a pure informational database related to the figures. 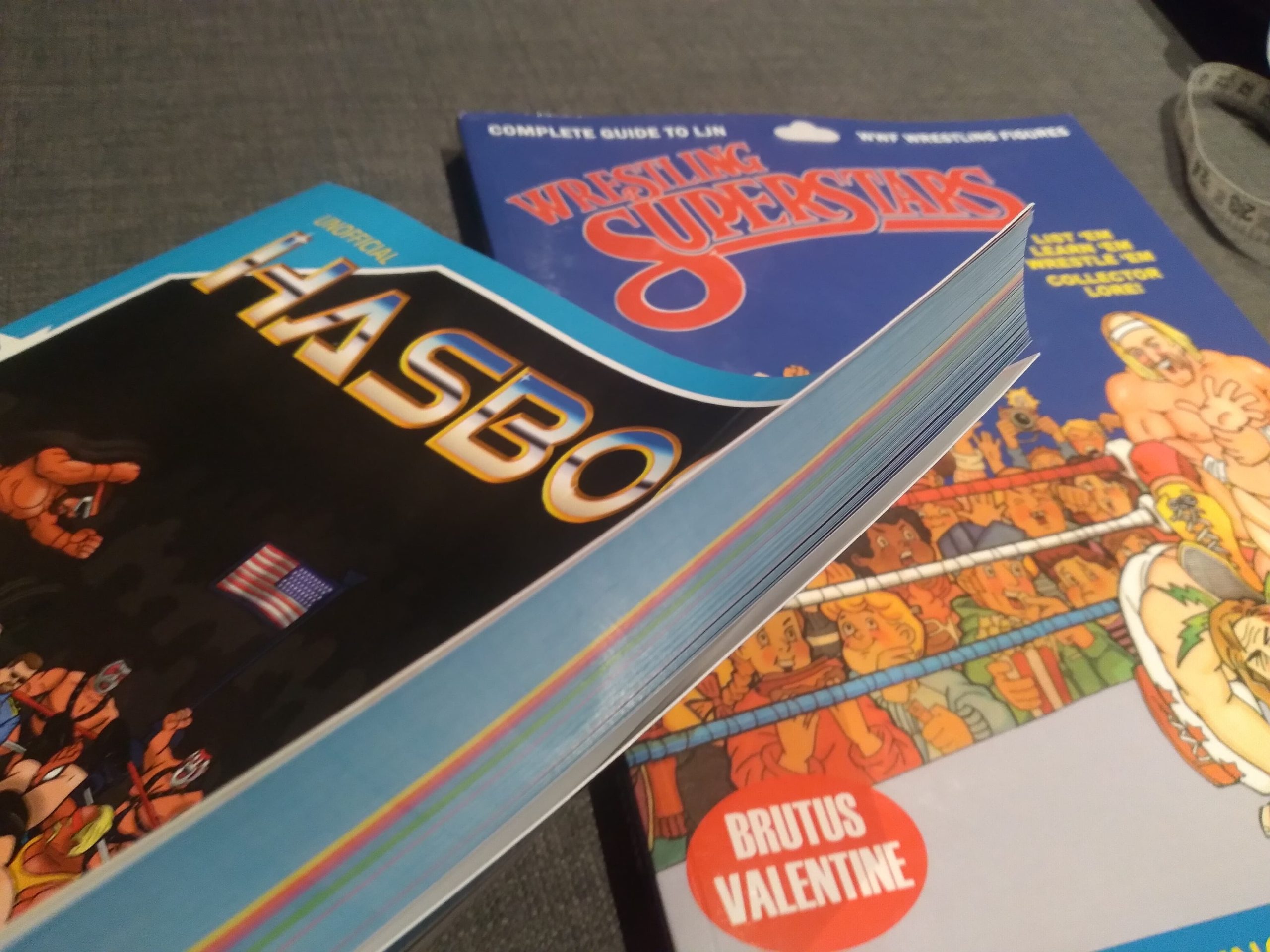 The Hasbook is easy to navigate with the series color-coded pages.

Hasbook harkens back to his childhood collecting. “I was very OCD as a child and had all my figures on a shelf nicely and when I played, I never used the actions and never smacked them against each other because I didn’t want the paint getting chipped,” recalled Nash. “But I played a lot and more than I should admit, I was playing with wrestling toys.”

The book is laser focused on the figures and puts them first in a big way.

The meat of Hasbook is the series by series figure/wrestler profiles that each consist of full-page spreads featuring a big head on photo of the figure and smaller shots from other angles, the front and back of the sealed packaging, art of the figure from the card, and the profile from the card. 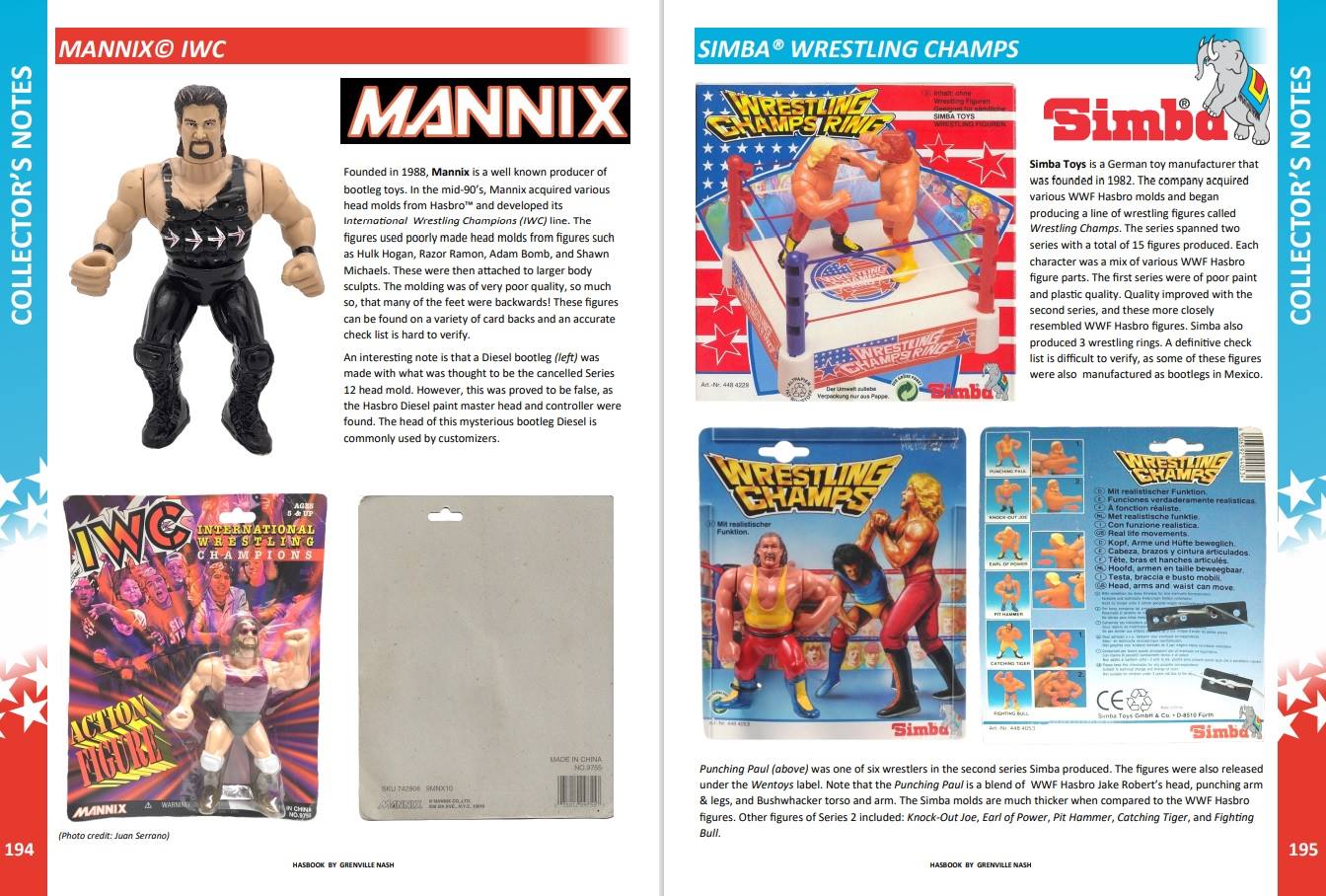 The popular WWF Hasbros had many bootlegs and knock offs. Nash now collects them as well and takes a look at them in the Hasbook.

The book also goes on to cover materials related to prototypes, international carding, other Hasbro WWF toys, advertising and even bootleg and knockoff figures.

As much as the collecting serves as an escape, so too did the making of the book for Nash, who was in nursing school while working on it. He said it provided a much needed distraction/escape.

The Facebook groups he joined after first finding out about the Mattel throwback figures while perusing a Walmart toy aisle would come in handy as word spread about his project in the tight-knit community. Through this, he was provided additional photos and information that fleshed out the book to its ultimate form.

Nash takes pride in the fact that “every image in the book is an original.” 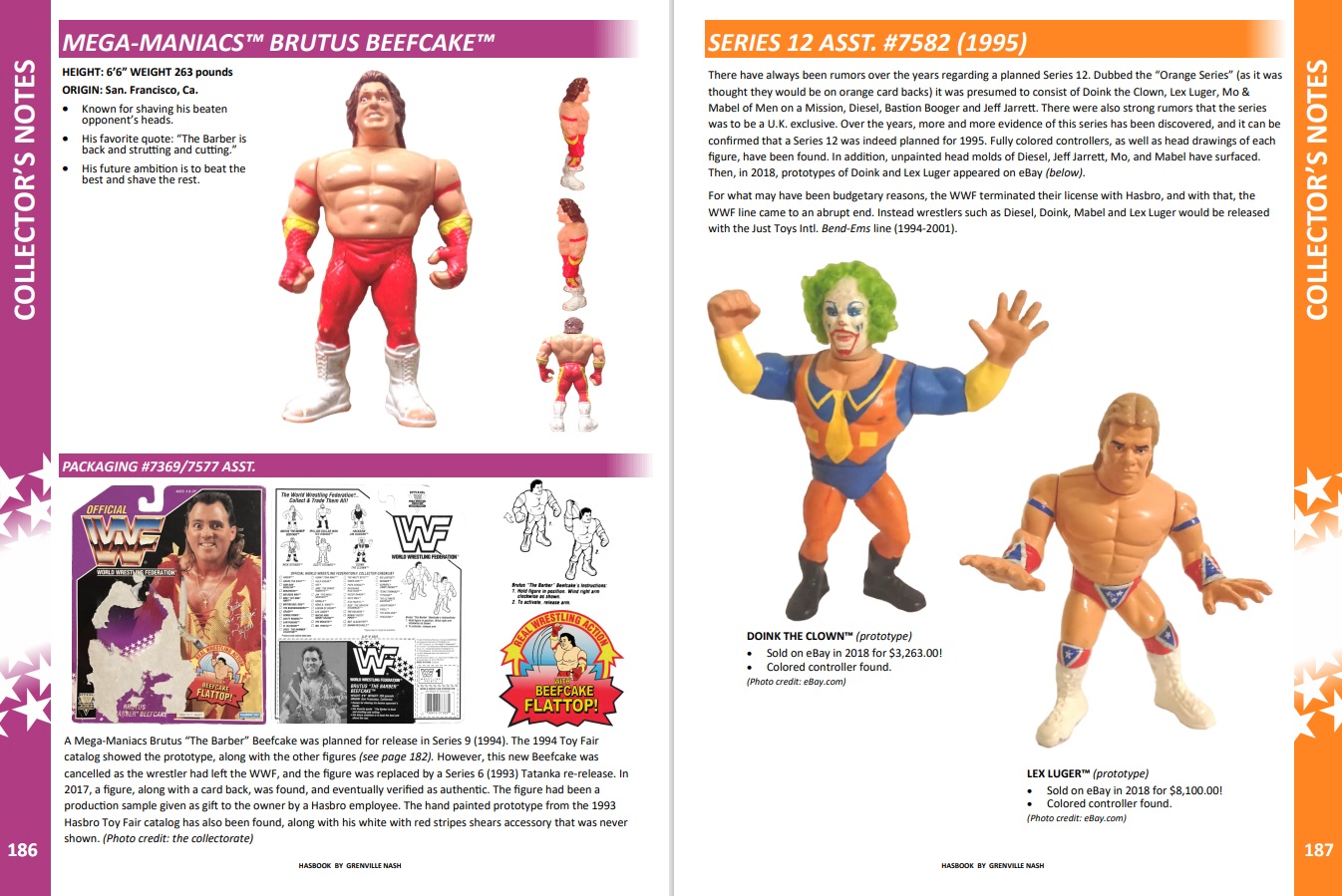 Some of the unreleased figures are covered in the Hasbook.

There is a hole though. “A huge disappointment for me is the (unreleased) Tugboat figure. Matt Cardona owns that and that’s just something that’s off limits,” lamented Nash. Despite the lack of images, Tugboat is mentioned in the book.