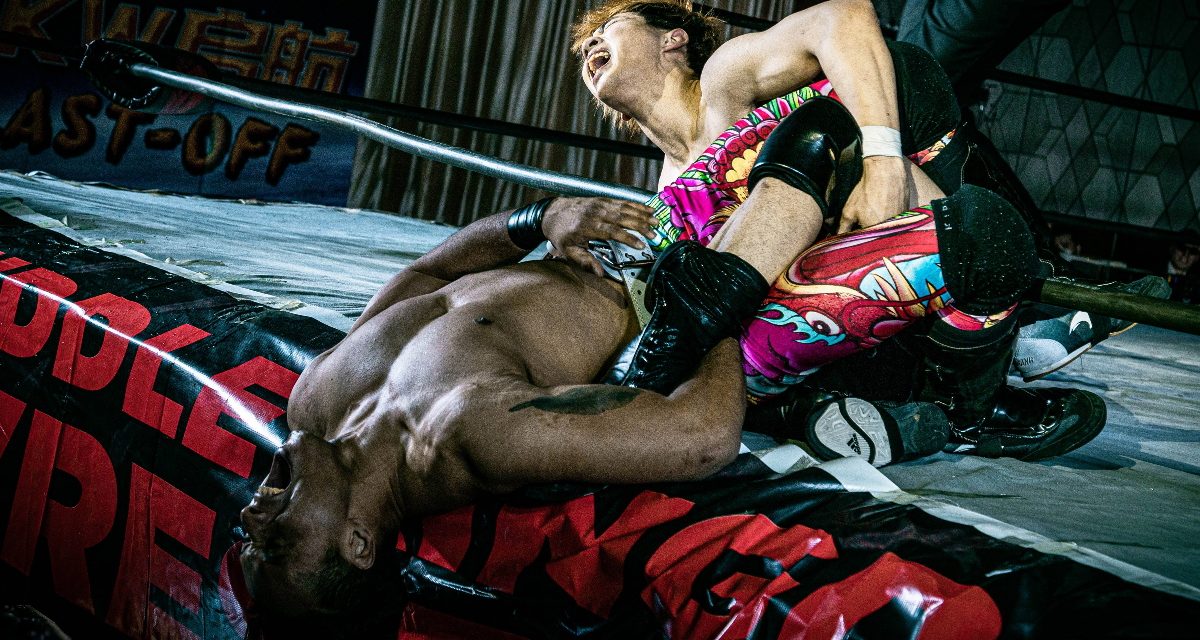 Cold open promo from Ash. He tells Jyunyan Lee that the recently recovered Belt & Road Championship will be his again.

It’s followed up with a response from Lee. He says Ash is like a man-child who gets everything from Chairman Al and that Ash should fight him like a man.

Beastface recaps last week and then gives a rundown of this week’s matches.

The ring announcer summons C2NY (Buffa & DC Chen) and The Stable (Big Sam, Ash and Uncle Money w/ Queen Marie to the ring for a word regarding their upcoming Tag Team Championship Tournament Finals match. Queen Marie reveals that Ash will focus on the Belt & Road title while Sam and Money will contest for the Tag.

Money gets the mic and denigrates Buffa’s precious New York Hip Hop saying that that of his Atlanta home is superior. Upon Sam getting the mic he shoves the announcer and then C2NY starting a brawl. 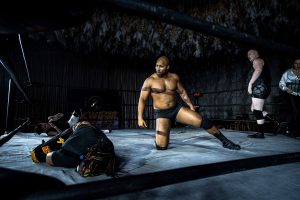 The Stable stands tall over C2NY

Marie helps the Stable get the advantage but on the outside Lee has jumped Ash. Money and Sam stand tall over C2NY in the ring, paying little mind to Ash whose brawl with Lee has migrated elsewhere.

In a prerecorded backstage promo Coldray says the last several weeks have been difficult for him psychologically, but he won’t let Zombie Dragon get under his skin and take everything away from him anymore.  He now knows exactly what he needs to do to ‘fix’ this.

Next we “blast-off” to Singapore Pro Wrestling for a match.

They shake hands to start this inter-gender match.

They start with a knuckle lock that the vastly more muscled Rex inexplicably breaks with a knee to take a standing wrist lock on the diminutive Lee. They play with fancy wrist lock reversals and chain wrestling for a while then get into a bouncy universal rope exchange.

Lee takes control after a drop toe hold and northern lariat but she still has trouble manipulating the bigger Rex. She misses a seated lariat which allows Rex to gain momentum to hook in a very stiff looking ankle lock but Lee gets to the ropes.

Despite some fight from Lee he gets the ankle locked again and again.

Slipping out of the ring allows Lee to use a few pinning combinations but they aren’t enough.

After a pinning combo of his own Rex hooks on a unique leg knotting pin for the win.

A video package explains the zombification of Little Johnny to go from Coldray’s bodyguard to Zombie Dragon’s psychic slave.

Coldray is trembling in fear as he approaches Dragon and then retreats to the outside. He paces the ring while the ref counts, finally bumping into and then pleading with the unresponsive Johnny. Johnny ends up tossing Coldray back in and Dragon is on him immediately.

Coldray retreats again but Dragon pulls him back in. After further attacks, Dragon goes up top but Coldray shoves the ref at him crotching Dragon on the strand. Coldray beats down Dragon and hooks on a grounded leg lock but Dragon headbutts his way out.

Coldray tries a blatant low blow. The ref was about to call it but Dragon no sells and the ref brushes it off.

After a Michinoku driver Dragon tries the top rope splash but Coldray rolls out of the way to the outside. 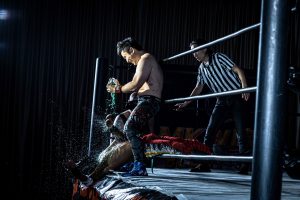 There Coldray takes the bottle of zombie serum, clocks Dragon with it then pours it on him.

Despite this Zombie takes control repeatedly forearming Coldray into the corner. But Johnny enters the ring and comes to Coldray’s rescue prompting the ref to call for the bell.

Post match Coldray and Johnny hit their big moves on Dragon and leave together.

A video package recaps the inaugural Belt & Road Championship tournament that saw Ash win in the finals with Black Mamba and then Nuwakote Tiger winning it in a multi-man contest in his home of Nepal only to be stripped for no showing his match with Ash.

They trade holds evenly and athletically to start.

Ash starts with striking that leads to Lee getting his leg tied in the ropes. Ash dropkicks it, hurting it for the rest of the match. Ash methodically works the leg.

A superplex attempt by Ash allows Lee to turn the tables. Head butts send Ash to the mat and a missile dropkick keeps him down.

Once they’re up Lee hits Ash with a multitude of kicks. After a nearfal going back to the leg gets Ash control again. 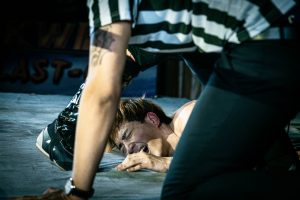 Ash misses a splash and Lee an enzuigiri. Ash hooks a half Boston crab that has Lee tap.

Different doesn't have to mean better.

I like that this episode tried a few things to be different now that the season is underway. IE A lot more promos and story that furthered things. However we also get the return of inconsistent reffing and odd psychology in matches.