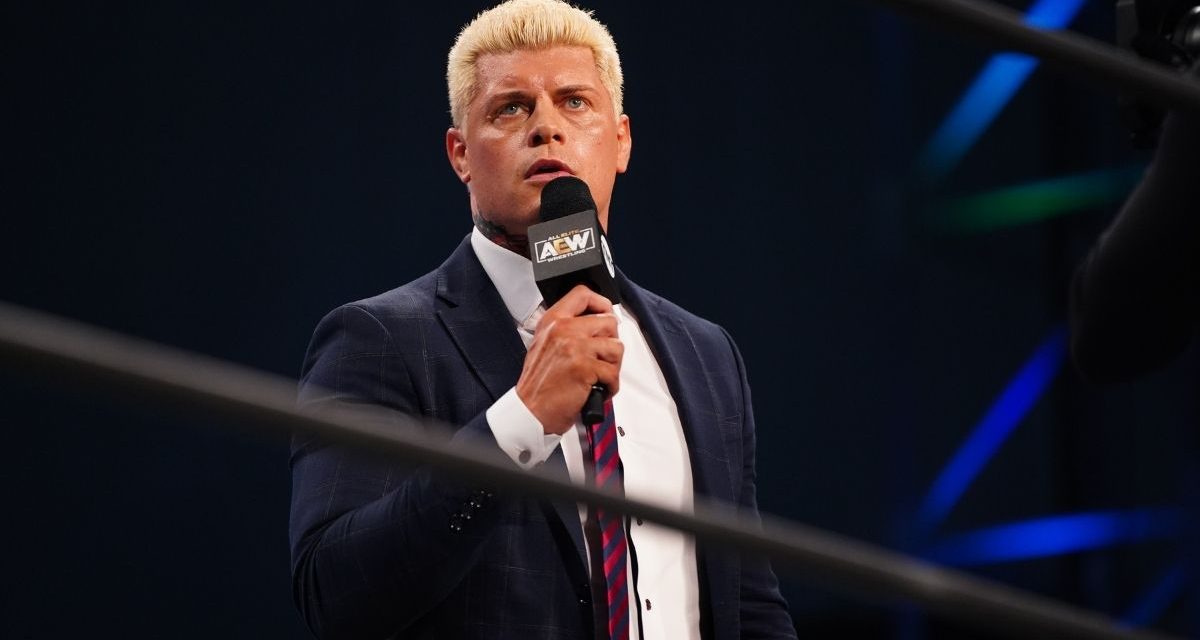 Cody Rhodes took part in a media conference call on Thursday, setting up the AEW Double or Nothing pay-per-view on Sunday, May 30. The main takeaway is that AEW is growing quickly and that he is excited for the possibilities ahead, including his bout against Anthony Ogogo.

“The American Nightmare” noted from the start that “the past year has been quite a journey.”

Recent announcements by AEW were the topic of much discussion. “It is amazing how quickly we’ve expanded,” Rhodes said at one point, just two years since the first AEW event.

Double or Nothing will be the first full house at Daily’s Place in Jacksonville, Florida, since the start of the pandemic. “I cannot wait. They’re going to have to hold me back from jumping into the crowd,” said Rhodes. He noted that it was the right time to bring back the fans, and that he “wouldn’t be surprised if we see some tears” from the wrestlers. “My heart is full for Sunday.”

Going forward, AEW has announced some upcoming live events, and he assured the media that the promotion would be putting on shows “within state guidelines” wherever they are going, and will change to accommodate the latest rules. He also teased that more live shows will soon be announced, including in new markets.

The plan is that some matches for AEW Dark and AEW Dark Elevation will be taped while on tour, meaning that AEW can take advantage of other independent talent, giving them both a chance to scout out new wrestlers and to let the indy names perform on a higher platform.

The other big news was that AEW would be gaining an additional show, Rampage, debuting on August 13, 10 pm, on TNT, and then have its shows moving to TBS in 2022.

“I’m really excited for Rampage,” he said. “We have a very large roster and we’re looking to expand our roster even more.” Rampage is definitely going to compliment Dynamite, meaning that it will “continue storylines.” Rampage will be treated as Dynamite is, not a secondary show. Again, he teased, saying that he had seen some of the art for Rampage.

With four shows, Rhodes insisted that “they’re all held as a priority.” Management has discussed that it is important to diversify the shows, and not everyone needs to be on all the programs. “Competition creates great product, and we are competitive within our roster,” he said, insisting the goal is “putting the most fresh wrestlers out there and let them fly.”

When asked about renaming the TNT title to the TBS title, or the creation of a new belt, he was coy. “The TBS title has not been discussed yet,” he said, but noted that with so many teams, another title was under consideration.

But, with all these media calls, much of the focus is naturally on the upcoming pay-per-view, on Fite TV.

Rhodes said that at Double or Nothing, “every match could be a main event on this pay-per-view” and that it would be “insanely fun.” In particular, three matches other than his came up:

Rhodes himself, with Arn Anderson in his corner, will be facing ex-boxer Anthony Ogogo (with QT Marshall, Nick Comoroto, and Aaron Solow) in a singles match. To prepare for the punches, Rhodes noted that he had been upping his training, doing more core and oblique work, beyond sit-ups and crunches. In short, he’s preparing to be hit. “In a boxing match against Anthony, I don’t stand a chance,” he said. “In a wrestling match. I actually don’t think he stands a chance.”

He did heap praise on Ogogo, though, who came to AEW’s attention through Diamond Dallas Page, who hyped him big. “He wasn’t wrong on Anthony Ogogo.”

With AEW having loose affiliation with a number of wrestling training grounds, he sees Agogo as the “very first developmental wrestler we had” simply because he wasn’t an already established name on the indy circuit. “All eyes on Anthony Ogogo this Sunday to see how he’s grown, as you put it, from a baby to now. We’ll see how he does in the ring.”