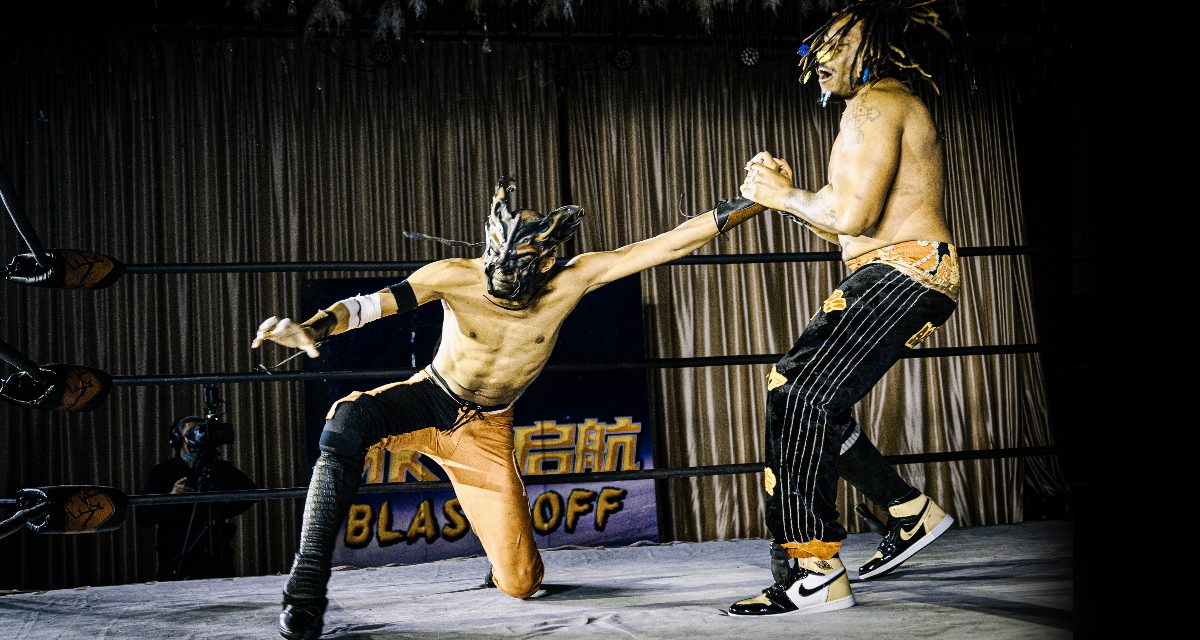 The show starts with a cold open studio promo from Buffa regarding his title shot against Zombie Dragon later.

After the intro XiaoJieMen welcomes us and gives us a recap of last week. The main point of interest is that PK Mode advanced to the semi finals of the Tag Team Title Tournament over Supreme Society. The tournament continues in this episode. 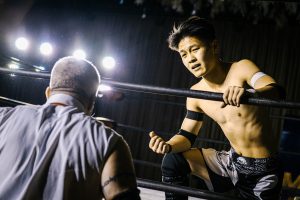 Steve gives Tao advice as they make their way to the ring. Steve is hooked up with a mic and headset. I’m puzzled as to why he needs it.

This one is a classic game of power versus speed and cockiness (evidently Steve is having an influence on Tao.). The two go back and forth with little decisive advantage until Saga finally ends it with an F5 while giving Steve the finger.

Poseidon and Holmes start. Poseidon’s technique is able to overcome Holme’s trickery for an early advantage and he tags in Plata soon after. Plata continues to focus on the arm.

Holmes tries to beat them at their own high flying game but ends up crotched on the top rope.

Connor now squares off with Poseidon and also cannot keep up with the speed and lucha techniques.

What seems like an argument on the outside between Holmes and Connor ends up proving advantageous when they catch Poseidon who tries to capitalize on their disagreement. 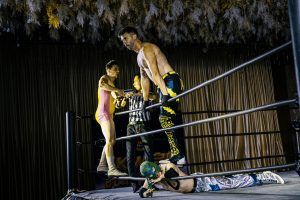 Whips take control with innovative rule bending tactics. They isolate Poseidon, tagging in and out effectively while brutalizing and humiliating Poseidon while bending the rules as much as they can.

Poseidon finally turns things around with an unexpected tackle out of the corner on Holmes but is stopped and dragged back by Connor. Connor and Holmes get into it with Plata while Poseidon scales the opposing corner. He leaps off and is caught by the whips. They launch him behind over their heads but he is caught by Plata who then wages war on both Whips by himself.

Plata attempts to cap things off with a slam on Holmes but Connor turns it around into a double team slam of their own, followed by an assisted senton. Holmes goes for the pin but the referee says Plata is illegal.

Poseidon returns and stunners Connor. He gets stopped after flubbing a mid rope attempt and is 3D’d and then a total elimination for the finish.

It is evident that the two are familiar with one another as Dragon is able to answer Buffa’s power and techniques with his own unorthodox counters. They go back and forth in this regard until Dragon sprays a mist that Buffa avoids by jumping through the ropes to the outside.

Buffa tries to outwit Dragon with a left handed handshake trick but is met with a boot to the face. The offense now escalates as Buffa turns things around with big moves and nearfalls. As Dragon mounts an offense Buffa keeps overall control. 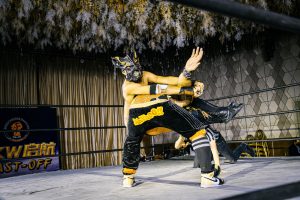 Buffa starts to get cocky as he gains more control. He challenges Dragon to hit him and they go elbow for elbow with Buffa’s advantage until Dragon bounces off the ropes with a tornado DDT resulting in both men down.

Dragon spikes Buffa with a cutter after an exchange but it’s not enough so he goes to the top.  He misses a leg drop and Buffa drops him three times for the closest nearfall thus far. Buffa hooks up his “Hey Ho” full nelson slam for an ever closer two.

Buffa heads up top himself. He misses too but doesn’t wipe out. Regardless Dragon catches him as he turns back around with a small package for three.

The two show each other respect post match but are jumped by the Supreme Society. DC Chen attempts to make the save but is too decimated by the duo. Coldray finally poses with Dragon’s belt after they have had enough of destroying the three. He throws it back down in front of Dragon as the episode comes to an end.

All the matches this week told a story and were entertaining. Better pace than usual as well. Very solid episode.