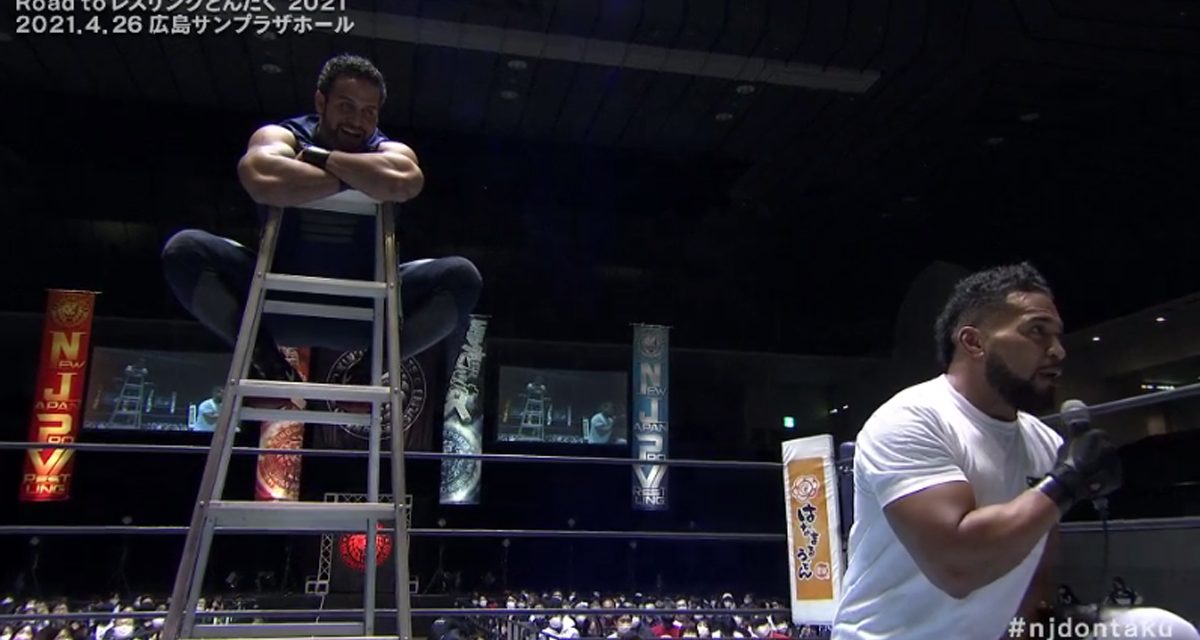 Taichi got a taste of what’s might be in store for him at night seven of NJPW’s Road to Wrestling Dontaku. Taichi will meet one half of the IWGP Tag Team Champions in Tama Tonga at Wrestling Dontaku on May 3rd. They will battle in an Iron Finger from Hell Ladder match. Iron Finger? I prefer to call the weapon passed down from Takashi Iizuka to Taichi when he retired, the Iron Glove. It sounds cooler.

At tonight’s event, Suzuki-gun’s Dangerous Tekkers (Taichi and Zack Sabre Jr.) and Douki teamed up to take on Bullet Club’s Guerrillas of Destiny (Tama Tonga and Tanga Loa) and Jado.

Things went out the window as Douki dove out of the ring at Tonga. Tonga didn’t dodge the attack or push a Young Lion in the way. Instead, he just reached over and threw a ladder at Douki. Douki crashed and burned…hard.

Tonga heaved the rulebook out the window by bringing the ladder into the ring. He shoved the official out of the way and hit Taichi in the head with the ladder. The official immediately disqualified Bullet Club. Loa prevented Sabre Jr. from interfering by spiking him with Ape S–t. as Tonga positioned the ladder over Taichi’s throat choking him out with it.

“Taichi, Zach, whenever you wake up and go home to watch this match again remember it. Remember waking up and looking at the ceiling,” Loa laughed warning Taichi that Tama wants the Iron Glove back and Zack that he will pin him in their singles match coming up at Wrestling Dontaku. If Zack wins that match he and Taichi will challenge for the IWGP Tag Team Championships. If he doesn’t, Taichi and Zack will never be able to do so while The Guerrillas of Destiny are the champions.

As a parting shot, Jado smacked Douki with his kendo before Bullet Club headed to the back. 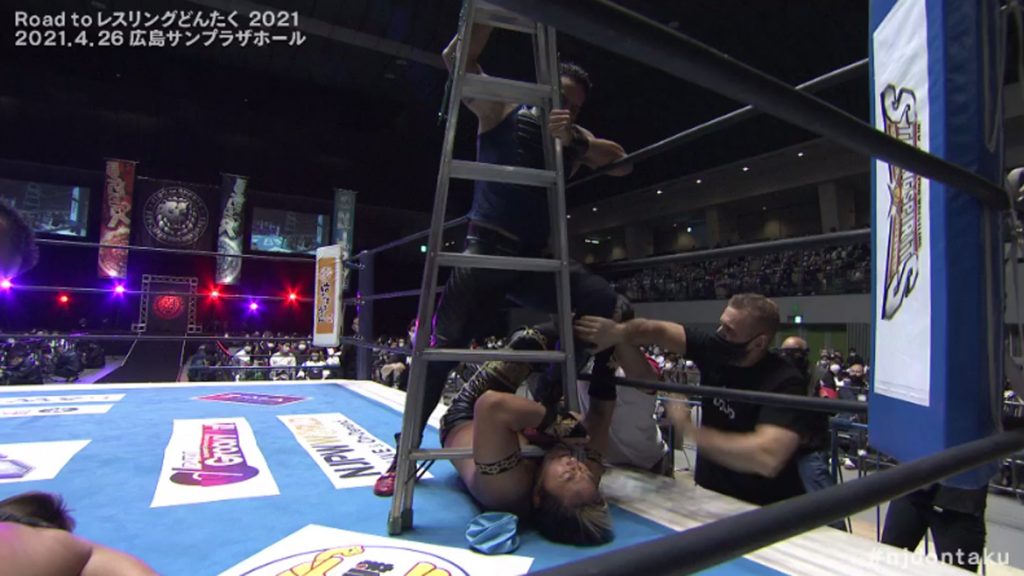 Suzuki-gun attacks before Roppongi can even take off their gear. Kanemaru shoves Sho into Tiger Mask, flips over and pins Mask. Desperado points and laughs at Tiger Mask.

Yano wants to bring his black hood into the ring. The official won’t allow it. Evil stuffs Yano under the ring and washes his hands of him. Yano disappears for some time. Yano returns later to tear off a turnbuckle. He throws it at Evil. Evil whacks him with it. Togo puts the black hood over Yano’s head and almost pins him. Master Wato makes the save for his team. Togo doesn’t learn from his past mistakes. He attempts to garotte Yano. Yano mule-kicks him in the “lower abdomen”, puts the hood over his head, whips Gedo into Togo for a double punch to the crotch. Evil jumps back into the fray with a hood of his own. He puts it on Yano, gives him Everything is Evil. He rolls Togo on top of Yano for the pin. Evil strangles Yano with Togo’s garotte.

In an awesome sequence, Takagi backdrops Ospreay off the ropes. Ospreay is caught by Cobb. Cobb launches Ospreay back into the air. Ospreay hits Takagi with a cutter. Bushi takes yet another pinfall for LIJ. Ospreay pins him with a Storm Breaker.

Winners: The United Empire (Jeff Cobb and Will Ospreay)

Tetsuya Naito versus The Great-O-Khan

Naito survives everything the powerful Khan can throw at him. Khan kicks out of a modified Destino but a second pins him.