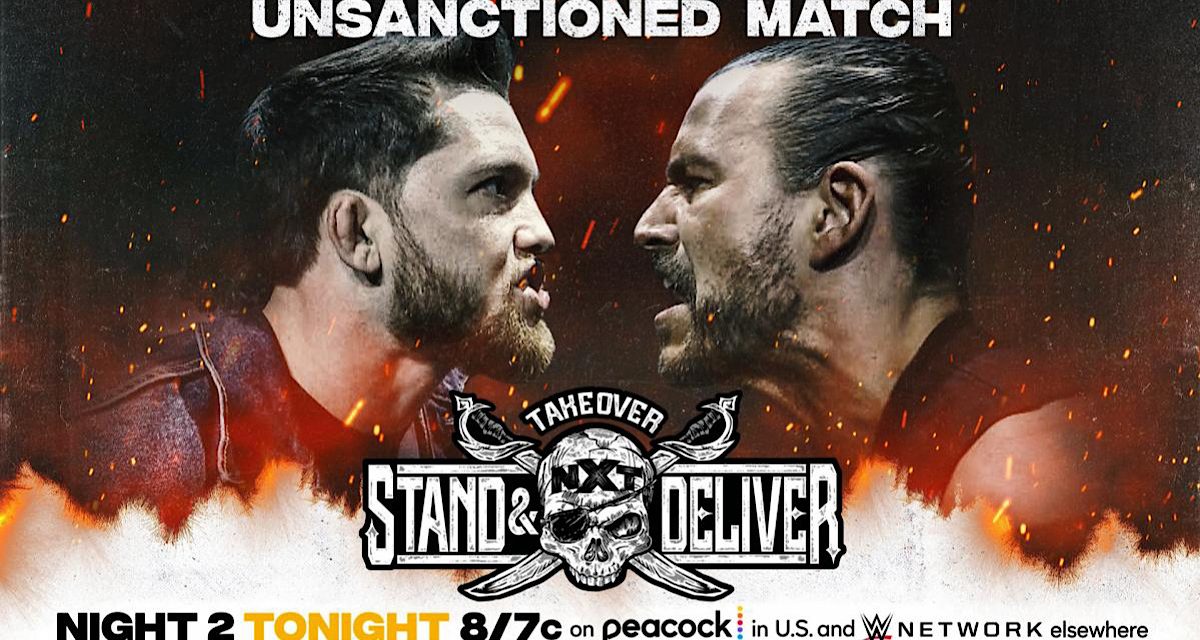 When NXT TakeOver makes a splash, fans usually question how the proceeding main roster pay-per-view could possibly follow. In this first-ever case, the event in question is another NXT TakeOver! On Wednesday night, Stand & Deliver Night 1 presented a clear highlight in NXT’s weekly programming while setting a bar for tonight. With a unification ladder match, NXT Championship headliner, and most notably an extraordinary Unsanctioned Match between Kyle O’Reilly and Adam Cole, Stand & Deliver Night 2 certainly stepped up to the challenge.

Along with a memorable main event, this show in particular was historic for being the first NXT TakeOver — or WWE event for that matter — that streamed solely on Peacock in the United States. Especially since the WWE Network played a major part in NXT’s success, it’s almost bittersweet. As the black-and-gold brand propels forward, NXT friend and Grammy-nominated singer Poppy opened tonight’s show.

After a few minutes of in-ring grappling, Devlin introduces and weaponizes the first ladder of many. Escobar quickly takes control and utilizes the ladders to keep Devlin grounded until getting caught with a mid-air DDT and backdrop onto the steel. They trade blows, and the Irishman finally regroups — although from the get-go he’s looked somewhat unoriented. Coming alive, he Moonsaults onto Escobar from atop the ladder, but the inevitable Legado del Fantasma run-in halts a potential victory. He takes a risky fall ringside but eventually recuperates, thereafter delivering a Spanish Fly from the rungs! He however cannot subdue Escobar, who pushes him through a corner-set ladder to secure the victory, taking down both belts from above. In a super sweet moment, he poses on-stage with his nine-year-old son to celebrate.

The brand-new NXT Tag Team Champions MSK are interviewed backstage, confidently responding to the announcement of their first challengers — Killian Dain and Drake Maverick. The champions are easing into this defending thing, eh?

The challengers blindside the opposition and subsequently control the opening minutes. Blackheart takes a beating but eventually hot-tags Moon, who apparently has adopted the “suck-it” taunt tonight. Her comeback is halted by LeRae though, and Moon takes the brunt of a Tower of Doom spot that reverses momentum once again. Blackheart then makes the comeback and wildly dives through the ropes; almost breaking a neck during this spot has become her specialty! After overcoming the opposition’s double-team, Moon hits simultaneous Eclipses as Blackheart hits the finishing senton for three. While definitely a good showing, the match was naturally a buffer between the bigger bouts of tonight.

Sitting ringside with Stephanie McMahon is college wrestling standout Gable Stevenson. Could he possibly be the next collegiate crossover? Hopefully!

“Mr. TakeOver” Johnny Gargano is accompanied by Austin Theory, both visibly underestimating the size advantage of the challenger. Reed reasonably overpowers the champion and blocks all attempts at offense until Gargano begins targeting the left knee. He pushes Reed into the announce desk, and the champion now surprisingly has control over his 330-pound opponent. Reed powers through the knee and rib pain, but the champion has his number, applying a short-lived Gargano Escape and avoiding a Tsunami Splash. He awkwardly slips from Reed’s grasp during a powerbomb attempt, but they recuperate when the big man dives onto an interfering Theory ringside. He attempts and misses a huge top-rope moonsault which allows Gargano to capitalize with One Final Beat for three. Gargano matches never miss — never.

Cameras cut to ringside where Pete Dunne, Oney Lorcan and the injured Danny Burch are watching on. What was originally the show’s closing bout is coming up next, and despite being a clash of warriors, the order switch was ultimately the right move.

The champion’s “war paint” has returned somewhat; a large red X covers his left shoulder to signify the similar injuries both men have suffered. Speaking of which, Balor wears down Kross’ shoulder and midsection, continuously reversing offensive attacks. This targeting earns Balor practically full control as he connects with a Slingblade, multiple corner dropkicks, and the Coup de Grace for two. He applies an abdominal stretch to damage the midsection even further, but Kross powers up and repeatedly clubs Balor. Kross delivers the Doomsday Saito and running forearm finisher for three! Balor’s outstanding run of technical, stiff championship clashes ends tonight, and although this wasn’t nearly above the previous ones, it was a fine closing chapter.

With so much history surrounding tonight’s main event, the coinciding video package preceding the bout captures its essence perfectly. Security fills the ring to separate each competitor — who both debut new entrance music inferior to the classic Undisputed ERA theme. Regardless, the introductions are made, and the headline matchup begins.

With tensions running high, an outside brawl commences immediately with Cole taking advantage with numerous steel chairs. He grounds his former stablemate with an Ushigoroshi and trash talks him into a striking exchange that O’Reilly wins. The latter takes it outside and revives his signature diving stomp into a chair, thereafter bringing in a very big chain. But it’s Cole who takes advantage, using the steel to assist a figure-four and backstabber. He then connects with a Shining Wizard into two steel chairs — which looked great, and carries O’Reilly’s limp body outside to attempt a deja-vu brainbuster onto the steel steps. O’Reilly however escapes but cannot bring himself to deliver the same; he instead connects with a stiff brainbuster atop the announce table!

As O’Reilly staggers over to Cole, the latter smashes a TV monitor — wherever it may have laid — over his head. Back in-ring, they trade offensive maneuvers and submissions before finally sitting across from one another in a fistfight. Cole gains the one-up with a low-blow and superkick for two. Perhaps going too far, Cole then places a chair over O’Reilly’s head to the referee’s verbal displeasure; he responds hitting the ref, meaning nobody can count the subsequent Panama Sunrise from Cole.

Continuing this absolute war, O’Reilly in a guillotine position crashes through the elevated ramp. Cole, with no remorse, drags his opponent ringside and connects with the steel-steps brainbuster, and O’Reilly somehow manages to lift a shoulder. In desperation, O’Reilly reverses the Panama Sunrise and delivers a Shining Wizard for two. The enemies are finally perched atop the ropes when O’Reilly delivers his own low-blow. He connects with a chain-assisted top-rope knee drop to conclude this truly epic encounter.

Multiple officials attend to Cole, attaching him to a stretcher. O’Reilly, walking back alone on his own two feet, looks back in victory. With an increasing number of no-rule matches filling wrestling cards everywhere, this one Stands above.

Kyle O’Reilly and Adam Cole put each other through hell — and told a story too! It’s a defining rivalry, and I really think it’ll be remembered as an NXT TakeOver classic, despite not having a large crowd witnessing the war. The preceding four matches were enjoyable too, however TakeOver Night 1 takes the consistency title. Overall, a fantastic two nights of pro wrestling action.