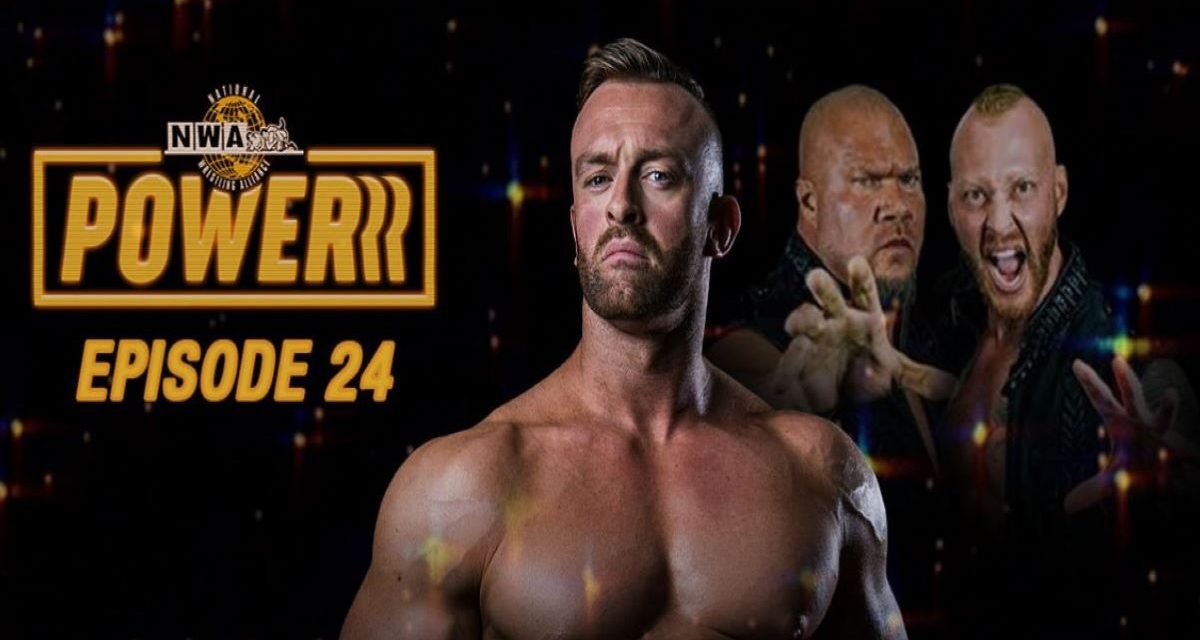 If you’re already tired of WrestleMani-ehh, then step Into The Fire for the new episode of the NWA Powerrr.

We go to a recap of the last episode, and of Murdoch losing the NWA National title belt to Chris Adonis in the No-DQ match.  What’s going to be the shake up after this?

Well, we’ll have to ponder that later as we are live from the GPB Studios in Atlanta, GA.  As always Joe Galli and Tim Storm have the call… and Aron Stevens (with Kratos, who’s masked, and hanging in the back). Stevens says that the show is dedicated to tag team wrestling, and he is out here to scout the talent and who’re the up-and-comers for the tag belts, since there is no number one contender. Before Stevens can expound on the subject, Sal Rinauro (in a sweet fringe jacket) goes to the Podium asking where his tag match was.  He went to the NWA Brass, He showed the footage from his BFF May Valentine’s phone, and went so far as he tried to call Stevens, but got no response.  Best part was Sal asking if his phone number changed to either 867-5309 or 900-909-9900.

Well, Stevens is not sure what “Prince Pigtail” is referring to the tag match, but he’s pretty certain you need a tag partner, but if he wants to meet up in a match down the road that’s fine with them.  An interesting development, but we’ll need to set that aside as we turn to the First Match of the night…. 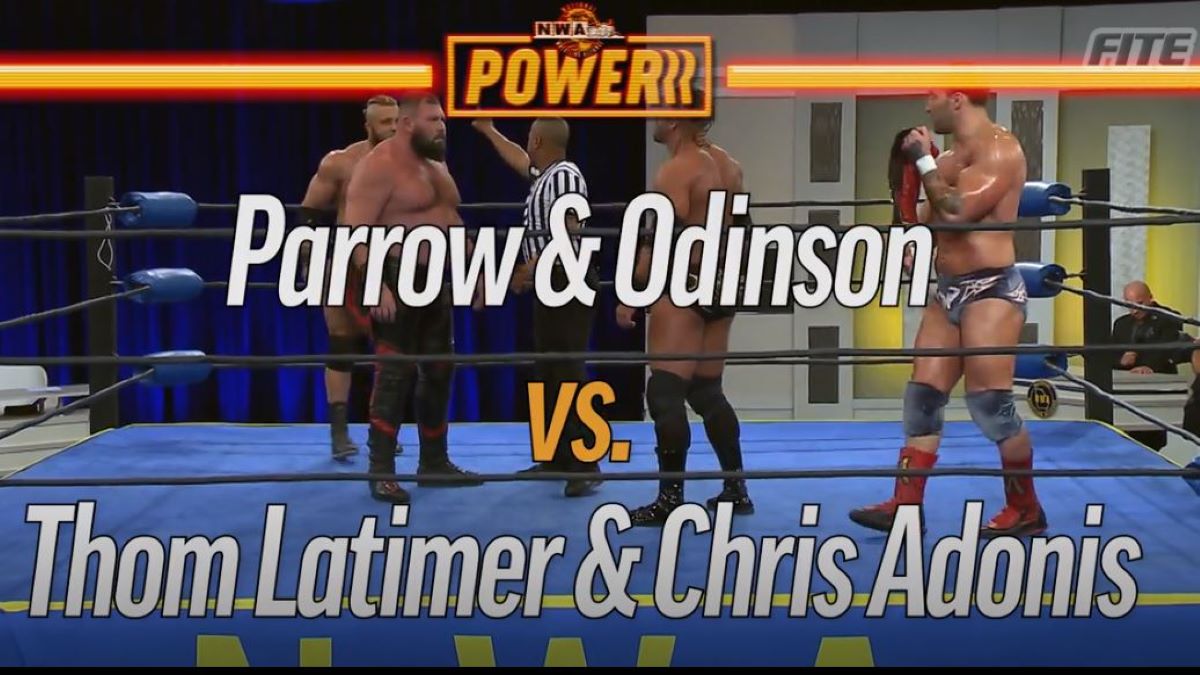 The End (Parrow and OdinSon) vs. Strictly Business (Thom Latimer and Chris Adonis)

OdinSon sprays into his and Parrow’s mouth something silver-y, and it looks like they’re ready to be McFeasting with the heroes of Valhalla (What? I saw Mad Max: Fury Road).  Anyway, match starts with shoulder tackles and no give between Latimer and Parrow.  Quick tag to OdinSon and Adonis for test of strength, but Adonis takes over with a swift boot to take control.  But this is no mere mortal Adonis has, and OdinSon proves that by reversing into a suplex Latimer in and then OdinSon double team with a back elbow to the corner, a splash by Parrow and a belly-to-belly suplex.  Best double team move by The End is OdinSon gets Parrow to a fireman’s carry and drops Parrow in a DVD/senton on Latimer’s prone form, who then rolls out the ring.  Parrow gives chases, but shenanigans outside as Adonis answers with a clothesline.  Now Latimer takes over and it’s your Parrow in Peril.  Double team in the form of a double whip to the corner, an Adonis clothesline to the corner, and a missile dropkick and cover by Latimer, but it’s only good for a count of two.  Adonis sizes up Parrow for the Masterlock, but can’t sync it on his hefty size.  Parrow hits a jawbreaker to escapes, and a quick tag to OdinSon makes him your Asgardian En Fuego (I don’t know what it translates into Scandinavian).

OdinSon gets fired up, and covers Adonis, but Latimer breaks up the count.  Now all four men in the ring, and it’s a Pier Four brawl, but Parrow and OdinSon get the upper hand, and it’s a SuperCollider for Strictly Business (and somewhere, the Authors of Pain are wanting to sue for plagiarism).  Now The End are going for the Doomsday Device, but Kamille comes out distract the referee.  While that’s happening, Latimer pushes off OdinSon off the top rope and he lands super awkward on the ring edge, and Adonis takes advantage by gi9ving Parrow a low blow that makes him roll out of the ring.  OdinSon gamely gets back in, but one Masterlock by Adonis and ref says, “That’s it.  He’s out.”

Your Winners via Submission:  Strictly Business

All of a sudden Thunder Rosa comes out, and is fired up, and Rosa comes out and tries to get in the grill of Kamille, who’s standing behind Adonis and Latimer in the ring.  Rosa is just spouting off, and poor Kyle Davis says we’ll be right back.

It leads to commercials for Nick Aldis’ action figure for Chella Toys, or you can get it on his website.  Looks cool as a collector’s item.  Check it out, and tell me what you think.

Back to the Podium, and Rosa is still irate over Kamille.  It’s at this point we get Taryn Terrell dressed like a Vegas dancer, and is debuting on NWA Powerrr, and will take on anyone….including Thunder Rosa. Now Melina comes out and is throwing shade and wants to back up Rosa.   Rosa is done with this, and says she don’t need Melina or Taryn, and walks out.

May Valentine with Austin Idol for universalwrestlingcollege.com, and honestly, I don’t know what to think anymore.  Not sure if this is legit or super-carny.  I might have to investigate, once everything is a bit more normal.

We go back to May Valentine, this time with Trevor Murdoch in a neck brace. He says that being the NWA National champ was his highlight, but sometimes a man needs to stand up for what he believes, and that means standing up to Nick Aldis and the members of Strictly Business. He saw how they ground down Tim Storm, and he promises that ain’t happening with him. As he puts his cap on backwards, Murdoch lets us know that Aldis is on borrowed time. 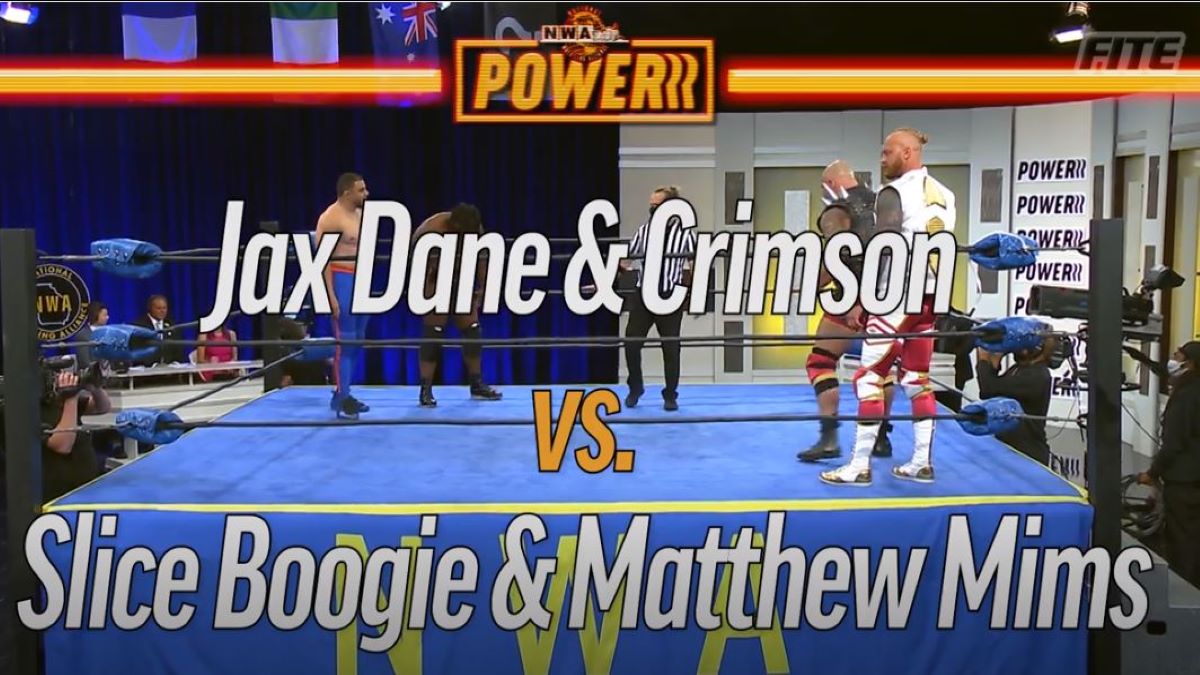 The War Kings (Crimson and Jack Dane) vs. Slice Boogie and Matthew Mims

We get Velvet Sky joining on commentary (always a more welcome sight than seeing…well, Austin Idol).  Slice and Jax start out, but then Jax slaps Mims in the face, so Slice tags him in.  From there, the power of Jax Dane is on display, as he shoulder tackles and hits a belly-to-back from across the ring.  Crimson and Jax showcase their chemistry early on in the match, and once Slice is back in with Crimson, Slice tries to get clever, but Crimson ain’t having none of that.  Double team of the night comes from the War Kings, as they splash Mims in the corner, followed by a Crimson elbow up top to cover for a count of two.  Slice goes over to the War Kings corner on the outside, and takes out Jax’s legs from the ring apron, and Jax lands awkwardly where his head hits the ring edge, and his out on the floor.  As commentary speculates how this will affect the match, the tide has turned and now Slice and Mims take advantage of the situation, with Slice with a chop block and a rope springboard elbow, but gets a two count.

Now it’s time for the new guys to show their double team action to Crimson, as they deliver a double suplex.  Meanwhile, Jax is still lying prone on the outside.  Slice in the ring goes to attack and Crimson hits a wicked spinebuster.  He crawls to get a tag, but gets nothing.  He finally realizes Jax is out and calls him to wake up, but to no avail.  Mims gets in to attack Crimson, but a DVD by the War King stops that momentum.  Slice on the outside is giving Crimson a Bronx cheer and Crimson grabs Slice by the throat, and that’s all the distraction Mims needs to do a rolls up on Crimson for the pin and the win.\

Your Winners via Pinfall:  Slice Boogie and Matthew Mims

Refs come out and are checking on Jax, and Crimson is just confused by the whole thing.

Kyle Davis is with “The National Treasure” Nick Aldis (and why this latter-day, thinking’s man “Mean” Gene Okerlund/Hulk Hogan pairing is not called, “What’s Causing Aldis” is beyond me.  But, I digress). 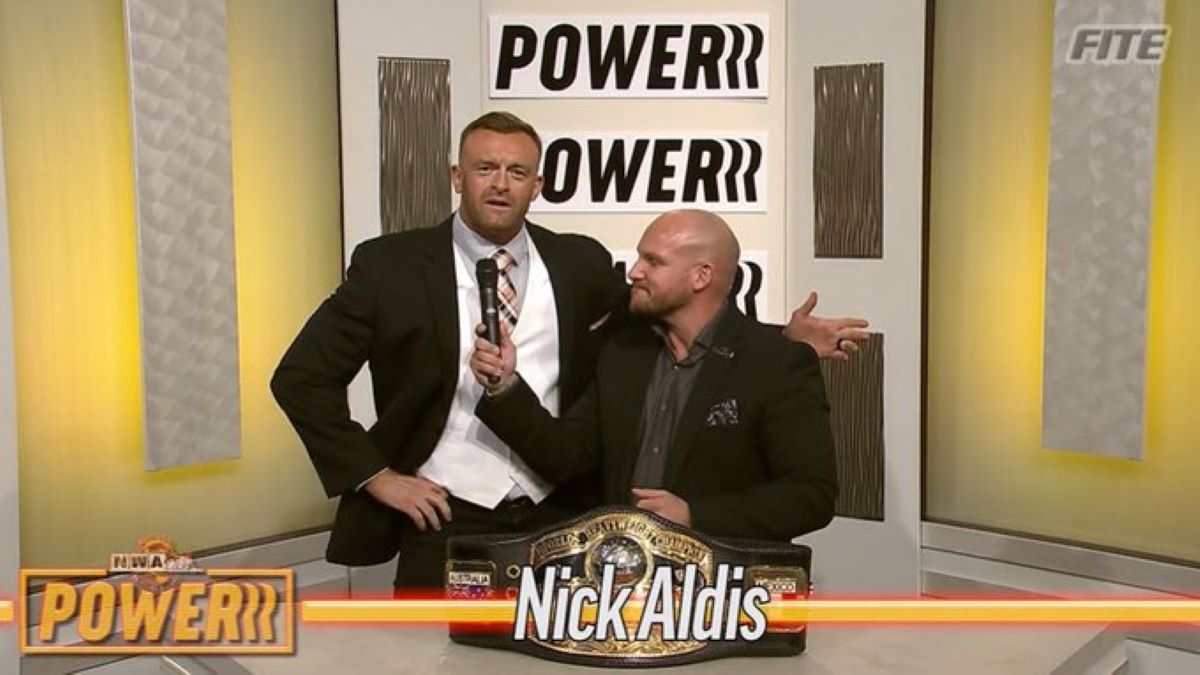 Aldis is out to talk not about the new member of Strictly Business, but it is about open tryouts for the remaining spot in Strictly Business.  He   states the spot is for those that show greatness, and it’s not guaranteed. Aldis challenges anyone to step up. The door is open to any wrestler, in every organization.  Hmm, this makes me very curious as to what surprises are in store.  But we can’t ponder on that for long because it is time for the Main Event… 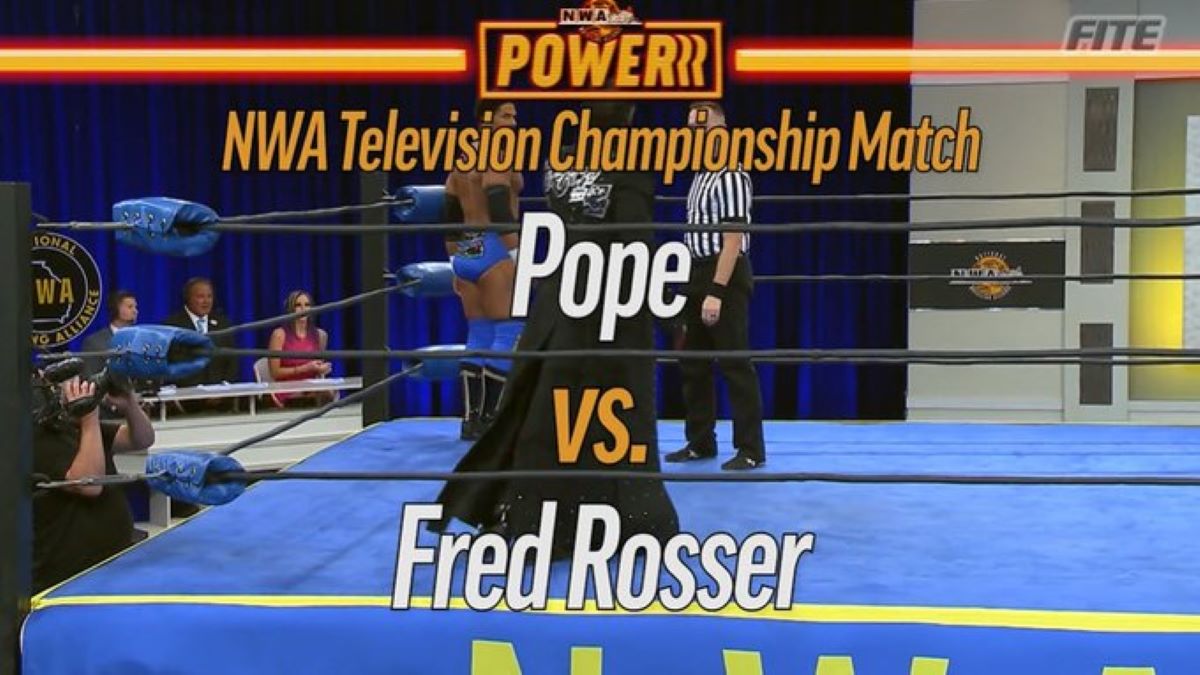 Already the match has dueling chants of “No Days Off” and “Pope is Pimpin'” for the two combatants.  Plus, we get boxing style intros (with a crowd!), and for some reason Kyle bills Pope as being from Cleveland, OH. Eh, it beats being billed from Provo, UT.

In any case, the TV title match starts with a 6:05 minute time limit.  From there, it’s bell-to-bell action with a collar and elbow tie up and chain wrestling in the early minutes. Neither has advantage. They go back at it, and Rosser dodges a Pope uppercut strike.  Now with 4:40 left, Rosser in control, but Pope takes over, and sweeps the leg and a fist drop.  He goes up top for a cross body, but misses the mark as Rosser dodges. Rosser with a spear and covers Pope for two at the 3:46 mark.

Rosser gets on the attack with a knee lift to Da Pope’s bread basket that doubles over Da Pope.  Rosser keeps up the intensity with chops in corner and a leg drop, but only gets a two count.  Pope counters and hits Rosser in the stomach, followed by a swinging neckbreaker.   Pope follows by whipping Rosser to the corner, and then goes for a splash, but Rosser evades, and Pope feels the after effects.  With 2:20, Rosser covers for a two count.  Now with 2:00 minutes left, they both slug away, and Rosser nails the Gut Check, but Pope rolls out before Rosser can cover.  Rosser knows time is running out, and goes to the outside, and send Da Pope back in, and covers to pin, but for a two count.  Now with 1:03 left, Rosser is clearly frustrated and takes off with the elbow pads, and rams Pope to the corner turnbuckle.  He goes for a splash, and Pope evades, and nails Da Pope uppercut (Pope-ercut, if you will), and then I see the Pope Express coming in with both knees to Rosser’s back, and Pope covers for the one, two, and three with 0:21 left.

As Pope celebrates, out comes Austin Idol and Tyrus, golf clapping the champ.  It’s a stare down between Pope and Tyrus, amidst “Pope is Pimpin’” chants to close out the episode.

Another solid show, and the roster just adds more interesting characters to the talent pool of the NWA, like Odinson and Parrow as a tag.  Slice Boogie continues to impress, and the promo tag team that is Davis/Aldis just delight.

As for the TV Title picture, I hope that now the last we see of “Mr. No Days Off”, but the potential of Tyrus and Da Pope in a match….uhhhh, yes please!

Also, if you need an alternative to WWE this week, subscribe on Fite.TV for $4.99/month and catch up on the last few shows.  Until then, See you in seven!