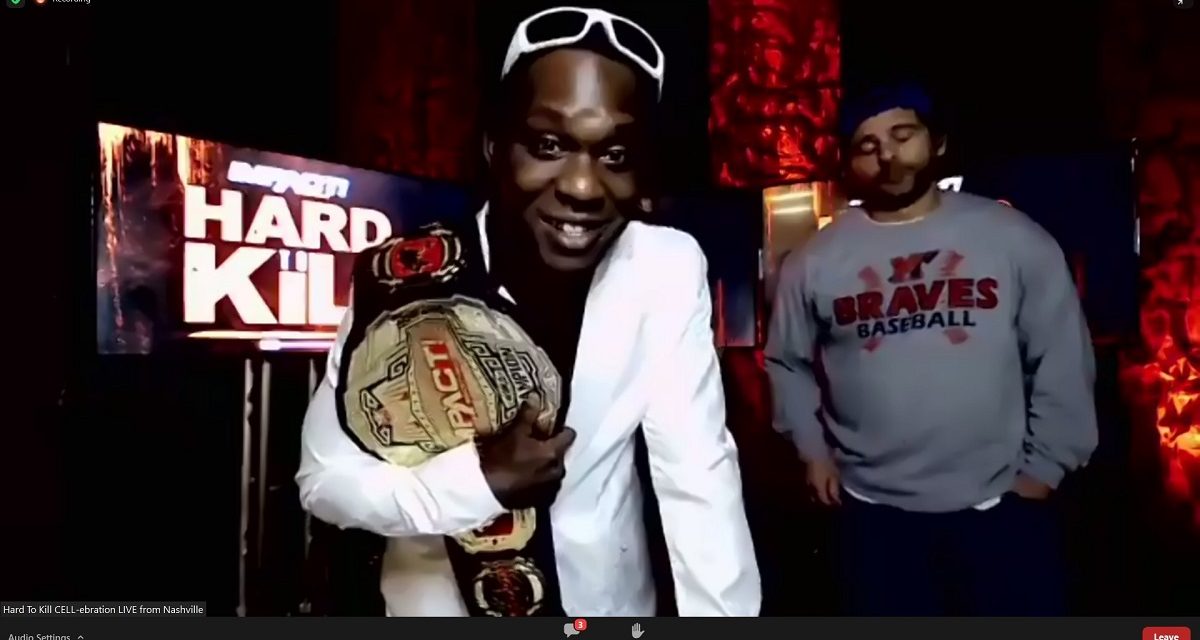 Hours before tonight’s Hard to Kill event, many of the stars Impact Wrestling participated in a virtual fan fest CELL-ebration to share their thoughts about the matches tonight, and the potential broader implications for crossover matches with All Elite Wrestling, such as tonight’s main event match.

Hosts Gia Miller and newly-signed commentator Matt Striker did a great job of keeping the event moving, introducing a parade of stars over the two-hour event, moderating the questions, and occasionally guiding the fans at home through the typical Zoom-call challenges. 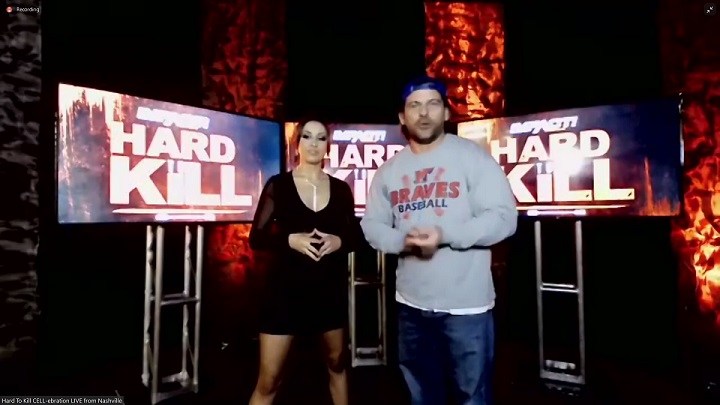 They were particularly on point when dealing with a few fans who appeared to be flustered or overcome with emotion when getting a chance to interact with their favourite wrestlers. Seeing that kind of response for the stars really drove home how powerful professional wrestling can be in providing an escape from reality, particularly during these unusual times.

To that end, the wrestlers also seemed to enjoy the opportunity to interact with the fans, something they haven’t been able to do for some time, as they are still running shows without fans in attendance.

And while the CELL-ebration obviously couldn’t fully replicate the live fan fest experience, the event was the next best thing in light of the circumstances, worth the money (included in the CELL-ebration ticket price was a gift bag which includes an autographed item), and a good appetizer heading into tonight’s big show.

Impact World Champion Rich Swann was up first, and he speculated on whether or not he would be able to fully trust Moose in the main event, or whether he needs to prepare to be backstabbed. He said he hoped it would be the former, since his goal tonight was first and foremost to defend the honour of Impact.

About whether he wished this match could be held in front of fans, Swann was practical-minded, noting that safety had to be paramount and they had to take measures to stop the spread of COVID-19. But he said he hoped that fans can still feel the passion and get excited about what’s happening, even if the wrestlers can’t hear their reactions.

“We all thrive on wrestling in front of a live crowd,” he said. “At the same time, wrestling in an empty arena, when that red light turns on, you want to give the thousands and millions of fans watching the same experience, the same energy.”

Knockouts Champion Purrazzo, accompanied by her friend Kimber Lee, started off talking strategy, saying that she was going to beat Taya Valkyrie tonight using superior technical wrestling skills – by picking a body part and working on it until Taya was weakened for a submission.

She noted the significance of tonight’s show, noting that the number of additional eyes that will be on the product as a result of the AEW crossover, is an important event for Impact, and the entire roster. She noted that if the crossover was ever expanded, she would like the chance to compete against AEW’s Serena Deeb.

Replying to a fan question about whether Lee would ever be granted a title shot, both of them said that they would rather team up first, and take aim at whichever team wins the Knockout Tag Team Championships tonight. 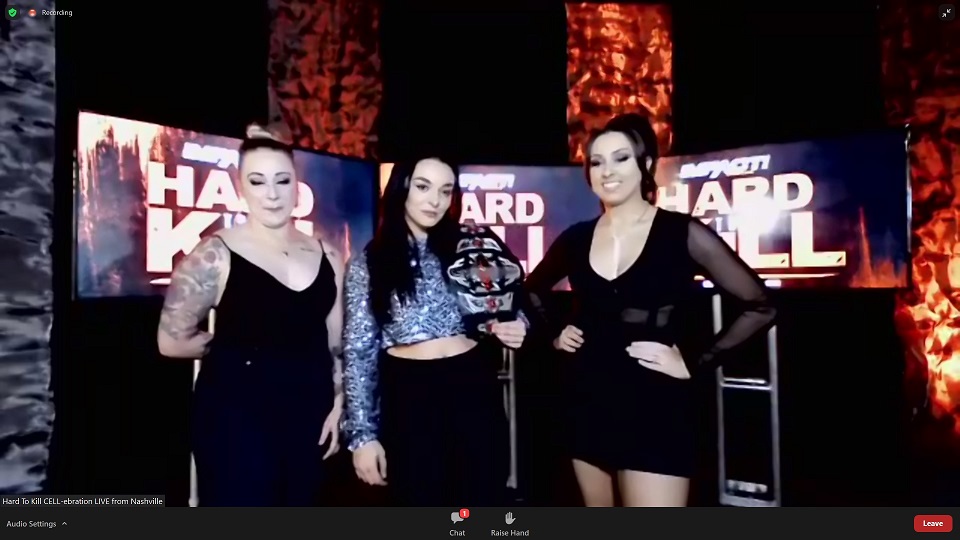 In a candid moment, Purrazzo dropped the “Virtuosa” persona for a second to answer Matt Striker as to whether she thinks she will ever be thought of as one of the greatest women wrestlers of all time. Purrazzo said that she has a lot of years to eventually be in that conversation, but that she will put in the work necessary to do it. She named Trish Stratus as her inspiration – getting a bit emotional talking about her admiration for Trish – and also name-checked Natalya and Beth Phoenix as inspirations for her in this regard.

Purrazzo really comes across as likeable in these types of events, and if she ever turns into a full-fledged babyface, she would succeed just by being herself.

Moose was uncharacteristically mellow during his segment, and it’s not clear whether that as to convey a quiet intensity like Matt Striker suggested, or whether he was trying to play up a storyline as a trustworthy and dependable partner for Swann.

Throughout his segment, he insisted that he would not betray Rich Swann during their match tonight, and that he was there only to represent Impact against AEW. He compared the Swann situation with his old NFL days, noting that he didn’t always like his teammates back then, but worked with them to achieve a common goal.

Eric Young seamlessly blurred the lines between promo and real life, highlighting his new mission, which is “to illuminate people,” like he’s done with Joe Doering and Cody Deaner, converting them to his cause, his “duty to fix the business that I see has deteriorated from the inside.”

A fan asked Young why he chose to come back to Impact as opposed to AEW or another company, and Young said that his lengthy history with Impact was the main decision, and he wanted to do what he could to take it to even higher heights.

“I believe the potential of this company is limitless, and the fact that it’s growing by leaps and bounds, especially during the pandemic, is very special. With my entire heart and soul, I believe in this company” 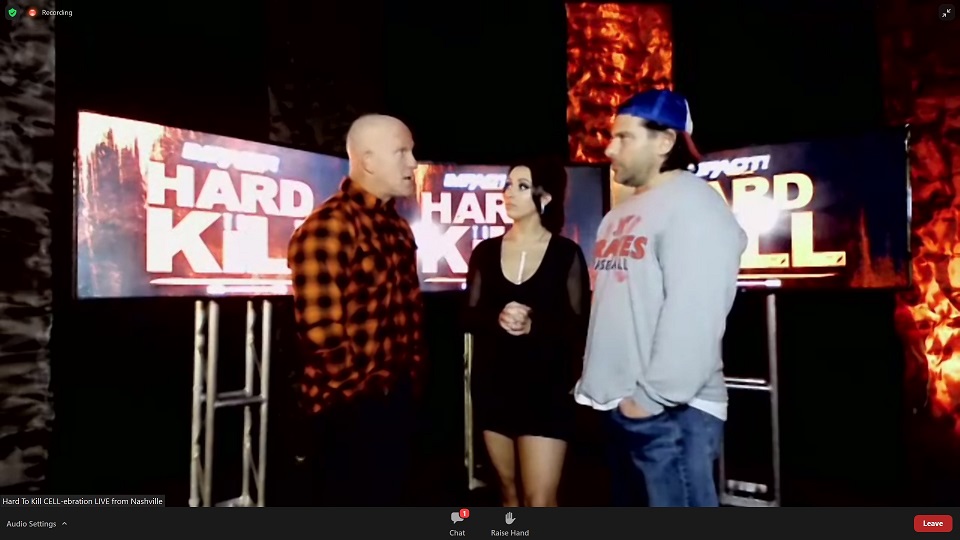 Like they do on TV every week, these two kicked up the volume and energy to sky-high levels, pumping their match and predicting they would win the titles tonight.

In response to a fan question as to dream matches, Kiera said her dream match would be her idol, Mickie James. Steelz said she wants to face Jazz as part of Jazz’s retirement tour, but she would also like to wrestle Purrazzo at some point.

They both praised the series of matches that Gail Kim had with Awesome Kong back in the day. And ended things with a potential teaser, hinting at a possible future match with a former Knockouts Tag Team Champs Taylor Wilde (who is reportedly returning to the company soon) and Sarita (Sarah Stock, who was recently released by WWE).

Like Moose, Sabin said that he was too focused on tonight’s main event to speculate on future potential crossover matches with AEW stars. But, if he had to pick any opponent there, it would be Kenny Omega. “He’s their world champion. Why would I want to wrestle anyone else?”

He noted how proud he was to be one of the members of the team defending Impact tonight, noting that his lengthy history with the company – 18 years, on and off – makes him an ideal flag-carrier.

He also answered one of the logical questions that was raised about the AEW storyline, namely why Impact hasn’t rallied more than it has against Omega. Sabin pointed out that Omega has allied himself with Don Callis who is an Executive Vice-President at Impact. “He’s our boss. How much can you say or do?”

The Good Brothers headlined the show, and said it was fitting, since they will be closing tonight’s show with their fellow Bullet Club member Kenny Omega, saying it will be right up there with their most memorable moments in the company, along with their debut at Slammiversary. 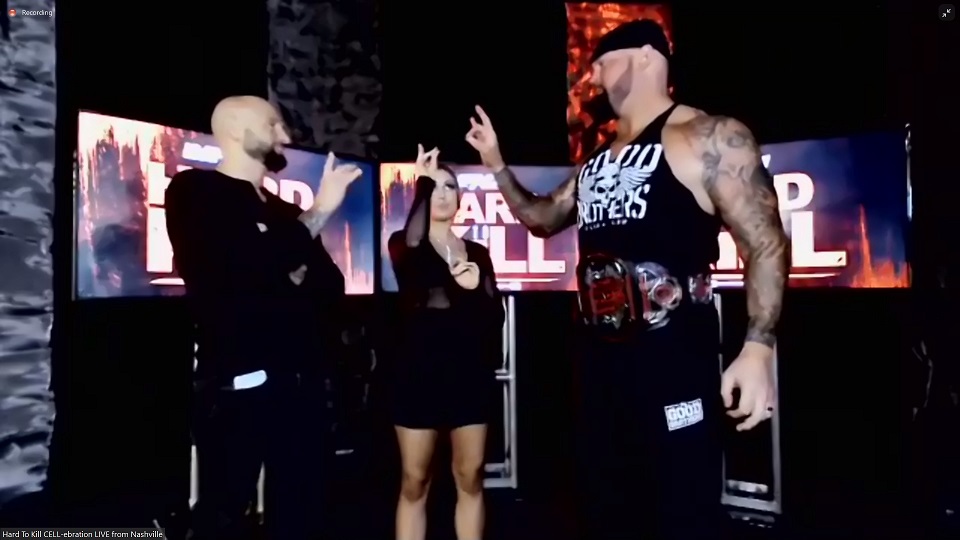 “(It felt great), after disappearing for four years, just coming back, and getting to be the Machine Gun again, and the OG again,” Anderson said.

They noted how important tonight’s match is, not only for them, but for Impact in general. And said they were very grateful to be able to get the opportunity to boost the awareness and interest in Impact, whether through the AEW storyline or otherwise.

And they praised Impact for letting them do extra-curriculars in terms of “waving the Impact banner” through their various outside vehicles and social media, noting that for them, the sky’s the limit in that regard.

In a funny gag, Gia Miller kept getting interrupted before she could close the show.

First up was Rohit Raju who barged in. He cut a fantastic, hilarious rant on being excluded from the CELL-ebration agenda, suggesting that this was all part of Scott D’Amore’s ongoing conspiracy to keep him down, and boldly predicted he would win the X-Division Championship tonight.

After he left, Ace Austin crashed the party. He said that as the Super-X Cup winner, he should be in contention for the X-Division championship, and teased that he would show up at some point tonight.

Doc Gallows came back to tell everyone that Don Callis – who had been advertised on the agenda – was not going to be there after all, since he was still en-route with Kenny Omega.

Lastly, Cousin Jake showed up and said that he was looking to get revenge on Cody Deaner tonight. His was the weakest of the four segments, but at least it was short. Think of it as the 12:55 sketch on Saturday Night Live in terms of positioning and quality.

Finally, Gia Miller closed the show, encouraging everyone to watch the PPV Kickoff event at 7pm on AXS-TV or Impact’s streaming channels, and Hard to Kill at 8pm tonight on PPV.