AEW Dynamite: Allin survives The Machine, the Bucks get a big surprise 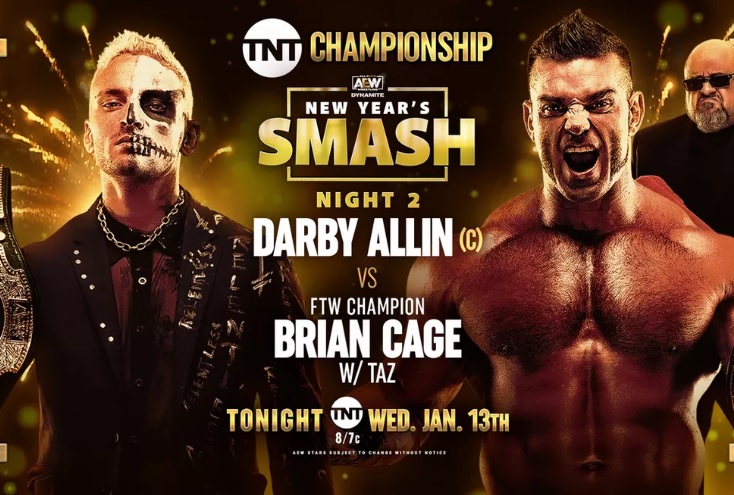 Welcome to New Year’s Smash, the event so nice, it needed two nights. Well, OK, perhaps not, but AEW spreading things out on these “not quite PPV” events between two episodes of Dynamite is a smart idea. It’ll be hard to top Kenny Omega vs. Rey Fenix in last week’s main event, but tonight’s card is pretty nice on paper as well, so let’s get into it.

Dynamite doesn’t tend to start with any recap videos, but tonight is an exception as the show walks us through the various developments between Eddie Kingston and PAC. Conveniently, they’re up first tonight.

Eddie Kingston (w/ The Butcher, The Blade and The Bunny) vs. “The Bastard” PAC (w/ Rey Fenix and Penta El Zero Miedo)

If there’s an introduction in wrestling right now that makes me smile more than the way Justin Roberts says “he is a BASTARD” when introducing PAC, I don’t know what it is. Maybe Kenny Omega’s accolade du jour, but that’s it. PAC flies all over the place early, and it appears the people accompanying both wrestlers are just a heartbeat away from an all out brawl. They manage to keep their fists to themselves, perhaps enjoying Kingston’s tremendous facial expressions, until PAC wins the bout with a Red Arrow.

After PAC tries to put Kingston in the Brutalizer, a tense standoff takes place between the two groups. Lance Archer comes to the ring, driving off Kingston’s family, but Archer yells at PAC that they need to “get on the same page.” Hey, look, you guys are almost there. So close.

Lest we forget, if Chuck loses this match, he has to be Miro’s young boy until Kip and Penelope tie the knot. This might be a relevant time to mention that Miro is undefeated since his arrival in AEW. Taylor soon ends up in the Camel Clutch, leaving him no choice but to tap out as Cassidy can do nothing but watch from ringside. Poor Orange is on his own now.

Could there already be issues in the Matt Hardy-Private Party relationship? Sure seems like it. Marq Quen, especially, objects to the terms of their contract with the Matt Hardy Brand, causing Hardy to basically yell them right out of their backstage interview.

Even though we’re nearly two weeks into 2021, Chris Jericho brings the Inner Circle to the ring to discuss their New Year’s resolutions. That leads to the unforgettable but relevant line, “You’re booing food?” from MJF. The Demo God says 2021 is the year that Jericho and MJF will win the tag team titles, which upsets both Santana and Sammy Guevara. The tension is palpable, but Jericho proposes a three-way match next week between Jericho and MJF, Santana and Ortiz, and Guevara and Jake Hager to decide who will be the “official” tag team of the Inner Circle.

The Dark Order gathers backstage to cut a promo about what is next for the group. Whatever it is, it begins next week when “Hangman” Adam Page teams with the Dark Order. They also put Hangman on the spot about when he’ll let them know if he’s going to officially join. John Silver gets super psyched when he hears the answer will come next week. Like, really, incredibly excited.

To hype up tonight’s TNT title match, a video package takes us down memory lane in the form if clips that lay out the feud between Darby Allin and Brian Cage, one that extends to include both Sting and Cage’s Team Taz mates.

The Elite is back together, at least if you count just Kenny Omega and the Young Bucks. Don Callis, for one, can’t wait to see them in action as a trio, and he won’t have to wait long since they’re up next.

Except Callis is ready to pull a fast one. As he feigns getting ready to announce the Bucks, he changes course and instead introduces Impact Wrestling’s Good Brothers as Omega’s partners and best friends. The Bucks can’t believe it as they watch backstage, nor can Tony Khan.

“The Elite” (Kenny Omega and the Good Brothers) vs. Danny Limelight and the Varsity Blondes

I’m not familiar with Mr. Limelight, but he appears to already be an underdog fan favorite. Good for him. The Blondes also get some good moments in, at least until Griff Garrison becomes isolated. And sadly, Limelight ends up taking the pinfall.

Winners: “The Elite” by pinfall

Just after the bell, Jon Moxley’s music hits, bringing the former AEW World Champion from the back of the arena to the ring. Despite the odds, he charges right into battle and quickly gets beaten down. To the rescue comes … not the Young Bucks but the Lucha Bros. Referees and jobbers try to calm down the situation, but Mox isn’t about to let things drop, and things only become more muddled when the Bucks climb between the ropes to talk sense to Moxley only to be superkicked by the Lucha Bros.

It’s time for the Dynamite debut of my dentist and yours, Dr. Britt Baker, and her new segment, “The Waiting Room.” Dig the cheesy music and retro studio audience applause. Baker’s interview style seems to be making fun of her guests and not allowing them to speak, which probably shouldn’t surprise anyone. She also pulls a “gotcha” by bringing Jade Cargill in as an additional guest. Cargill disses Cody and Brandi, slaps Cody, Red Velvet comes in and slaps Jade … and the women in the mock studio audience rush in and become part of the action as well. Clearly enjoying herself, Baker runs the footage of her attack on Thunder Rosa. That brings a response from Rosa that may or may not have been filmed in her own living room. The upshot here is that Rosa will get her shot at Baker at Beach Break on Feb. 3, though the doctor claims Tony Schiavone told her she doesn’t need to do it, so we’ll see.

The question here is whether Stunt’s mouth has written a check that his tiny butt can’t cash. The early evidence is not promising, but once he makes his inevitable little man rally and gets Jungle Boy into things, as J.R. says, “this match has exceeded my expectations as far as competition is concerned.” But you know how this is ending: Stunt gets pinned, but not without Blanchard lending his charges a hand.

If you haven’t seen Deeb wrestle yet, she’s the kind of pro’s pro who can have a good match with anyone, or so it seems. Putting her in here against someone AEW hopes is a rising star in Conti makes a whole lot of sense. Their trading of submission holds is great, and Conti shows off more high impact strikes than we usually see from her as well. It’s just not quite her time yet, and Deeb retains thanks to the Detox.

For a match that has been built up as much as this one, they haven’t left much time for it as the bell rings just after 9:47 ET. Does that increase the chances for hijinks or a muddled finish of some sort? We’ll have to see. Or maybe these men will just empty their tanks in the first few minutes, which appears may be the case as Cage sends Allin through a table and bloodies him. Cage carries him back to the ring and continues to pummel him, even getting a classic “stop the damn match” from Jim Ross. Even after getting suplexed from the stage into the ring, Allin kicks out at one. You know Allin is going to rally, though, and he does so with a flurry of moves that includes a Code Red. Ricky Starks is ready to interfere but is neutralized by Sting. Allin hits a crucifix bomb off the top turnbuckle and survives in seemingly improbable fashion.

And after two weeks and four hours of wrestling, New Year’s Smash draws to a close. See you in seven!

This was another enjoyable show with a good balance of solid to exceptional in-ring action and some fun storyline bits too. I should know better, but I’ll admit that Don Callis got me with that Young Bucks-Good Brothers switcheroo, and Kenny Omega turning his back on the Jacksons truly cements his heel status. Even when “regular” Dynamite returns next week, it will do so with some nice momentum.