Total Bellas: The girls are ready to fill the cradle. Kathy’s brain is nearly fatal. 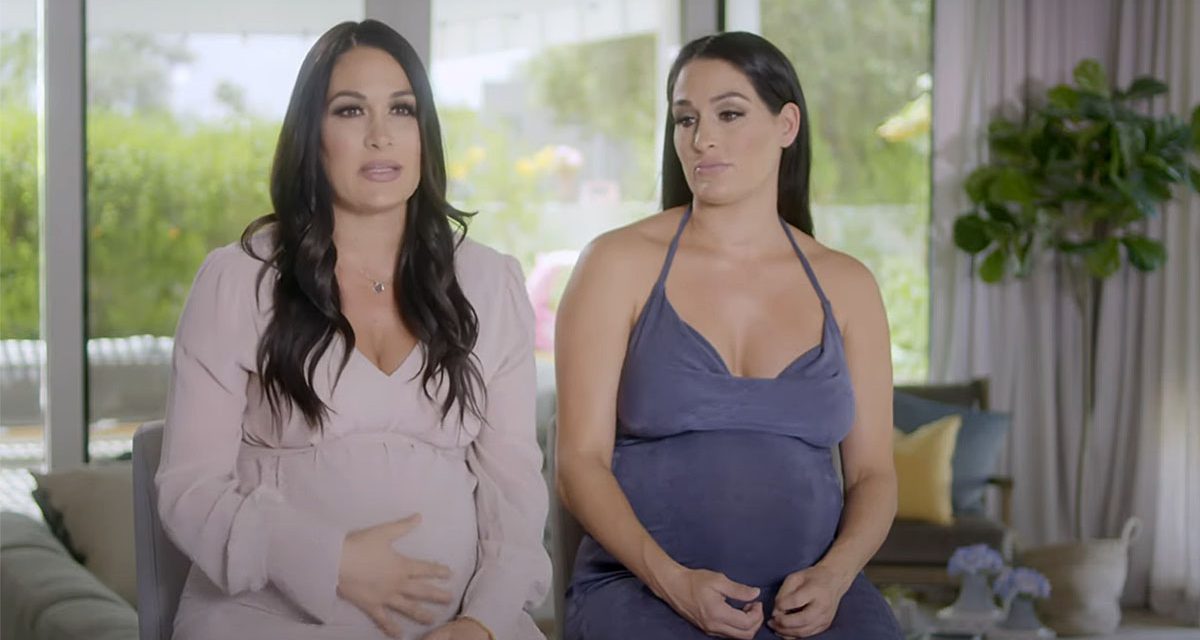 While pretty much everything about “Total Bellas” is a celebration of the frivolous and banal, in rare occasions, things can get a bit serious. This week’s episode was one of those occasions, as it was centred around Kathy’s brain operation more than her daughters’ inoperational brains.

The episode starts off immediately where the last one ended, with Nikki and Artem heading to LA. But the separation anxiety kicks in, and Nikki Facetimes Brie to check if she left Matteo’s hospital clothes and a bunch of other stuff behind. In searching for the clothes, Brie and Birdie start looting the place while Nikki can only sit and watch it happen.

Nikki has to pee, so she has Artem pull off to the side of the road, and then makes Artem not only carry the portable toilet, but also pick up her used toilet paper. Sucks not having a job, eh, Artem?

Brie calls her and lets her know that Johnny Ace (their mom Kathy’s husband) called to let her know that Kathy has had to go to the hospital because her face is pretty much paralyzed and she’s feeling vertigo. They think it’s another bout of her Bells Palsy, but to be safe, the doctor has ordered an MRI.

Brie calls again and lets Nikki know that the MRI revealed a lesion on Kathy’s brain stem, meaning that she now has to go in for emergency brain surgery. Nikki and Artem feel weird about leaving for LA in light of this news, so they turn the car around and head back to Phoenix.

Some time later, Nikki has returned to Brie’s and Kathy calls them with some scary news. The doctors say that there’s only a 20% chance that her face will fully recover. But even more scary is that the location of the lesion brings about the risk that she could suffer a fatal stroke during the surgery. The girls are understandably distraught by the thought.

Kathy weighs the options of timing for the surgery. If she waits until after the girls give birth, in the worst-case scenario she will at least have seen the grandchildren. But if she waits, it increases the risk that she may have more, irreparable problems in the meantime.

It’s the day before her surgery, and Kathy and Johnny go visit the twins. She’s nervous, naturally. Nikki tells her that she and Artem have decided to stay in Phoenix to have the baby, despite the significant costs, because she wants to stay close to her mom during these times.

In an emotional scene, Kathy tells the girls that in the worst-case scenario, she wants the girls to promise to take care of Johnny, and then we get a montage of clips of Kathy and Johnny hanging out. Sadly, People Power alone isn’t strong enough a force to save Kathy.

The next day, the girls, Artem, and Bryan – who has taken some time off the road for paternity leave – are at home, waiting to get updates on the surgery. To de-stress themselves, they talk about breast pumping, and Nikki makes Artem try on the breast pump, which he says he’s not into, but you know the women inside of him has been secretly dreaming about it for years.

Kathy’s been in surgery for five hours, and everyone feels like time is standing still. Artem and Bryan kick Nikki out of the house for some secret reason, so the girls barge in to see what’s going on. It turns out that the guys are wearing empathy bellies, which gives men the sensation of being pregnant. They debate whether it’s a genuine experience or not and then compare bowel movement sensations – a literal pissing contest. #Rimshot

Johnny calls them with the news about Kathy’s surgery, and it’s good news: they cleared out the troublesome mass without any issues, and now she’s in recovery. The doctor told Johnny that based on the size of the lesion, if she’d have waited, it could have been fatal, so it’s a good thing they went ahead when they did.

They Facetime her the next day, and are pleased to see that she’s recovering well. The day after that, she’s back home (#GreatHealthCarePlanAmerica), so they go to visit her there. She still has some paralysis and needs to get some physio because her eye is a bit messed up and her face is still a bit droopy. But the worst of it is past, and everyone’s happy of that.

They flash forward a few weeks, and everyone is anxiously awaiting the arrival of the girls’ babies.

Despite an imminent birthing to deal with, Brie is planning for her and Bryan to move to Napa Valley. In a talking head segment, she says it’s been her dream to do so, and after Kathy’s life-threatening experience, Brie’s realized that life’s too short to not chase your dreams.

Of course, what one twin does, the other must also do. So they then drop the bomb on the guys that they’ve found two houses very close to each other. Bryan isn’t wild about moving – this will make their 8th move in 5 years – but he’s okay with it because apparently the new place has trees around it. For his sake, Artem is happy to just not be homeless, so doesn’t say peep.

Flash forward to the day before Brie is due, and the talk turns to her bloody mucous plug, which sounds like the worst band name ever.

Another flash forward, and it’s three days after Brie’s due date, and the baby still hasn’t shown up yet. #LazySlacker. The doctor – well, that’s what they say on-screen… I’m a bit skeptical, because what kind of doctor wears jeans and doesn’t wear gloves when poking around down there? Anyway, the “doctor” checks her out, and says the baby should come soon.

Nikki, meanwhile, is four days away from Matteo’s scheduled arrival. The “doctor” checks her out too and as she does, Nikki’s water breaks. Bet that quack wishes she was wearing gloves now.

Which means that next week, we should be getting at least one new cast member in Matteo. And possibly two if Brie’s slacker millennial kid bothers to show up.

Come back next week to find out.